Navigation
Soon after Ryan got off work on Friday evening, our family piled into his car and headed off to Golden Valley, North Carolina. We had plans to spend the weekend at Jellystone Park, a 600+ acre park located at the base of of the Blue Ridge Mountains, and arrived a little after 7 p.m. 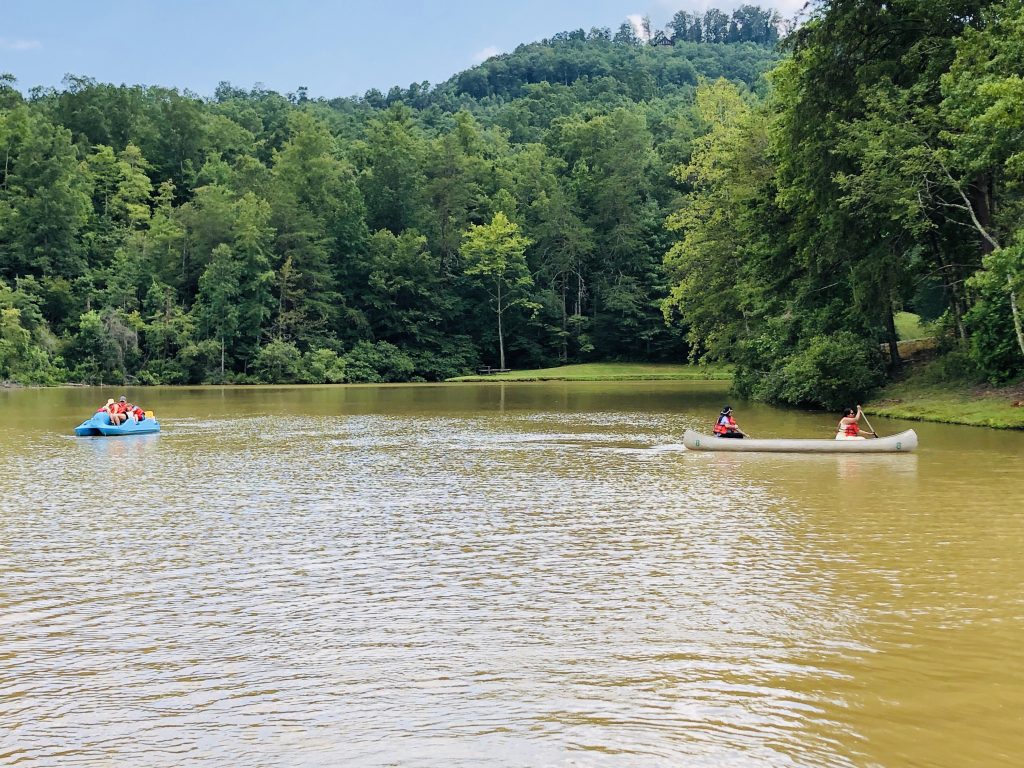 We checked in, unloaded our things in our cabin, collected a Fun Pass for Chase and then rented a golf cart and cruised down to the pool to explore and grab dinner. As we parked our golf cart and joined in the tail-end of the evening pool party, it became instantly clear our family was in for an active and exciting weekend. 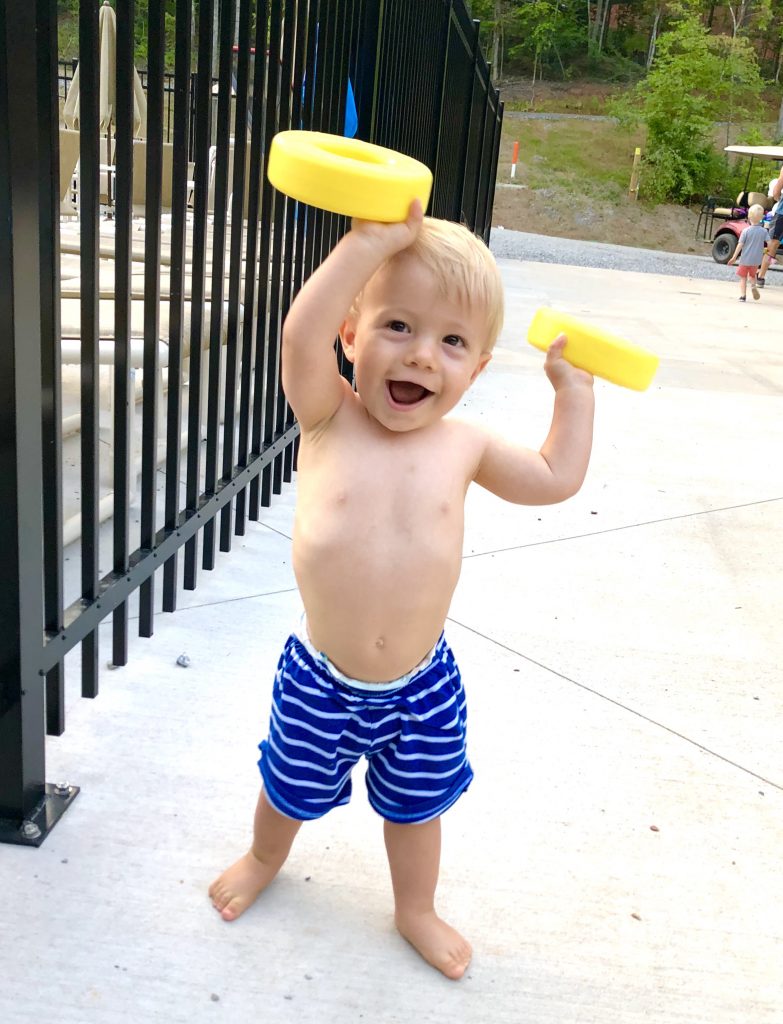 (Ryder’s walking has totally taken off the past week and it’s so fun to see! Little explorer!)

We were invited to Jellystone to check out the park by their PR team and I can say with confidence we will absolutely be back! The park officially opened earlier this summer and it is the perfect hybrid between outdoor fun and kid-friendly activities — a total kid paradise! We opted to stay in one of their dog-friendly cabins because we wanted to bring Sadie and also wanted Ryder to have a separate sleeping space from us but they offer premium tent sites, full hook-up RV sites, luxury lakeside glamping tents and large group lodges as well. 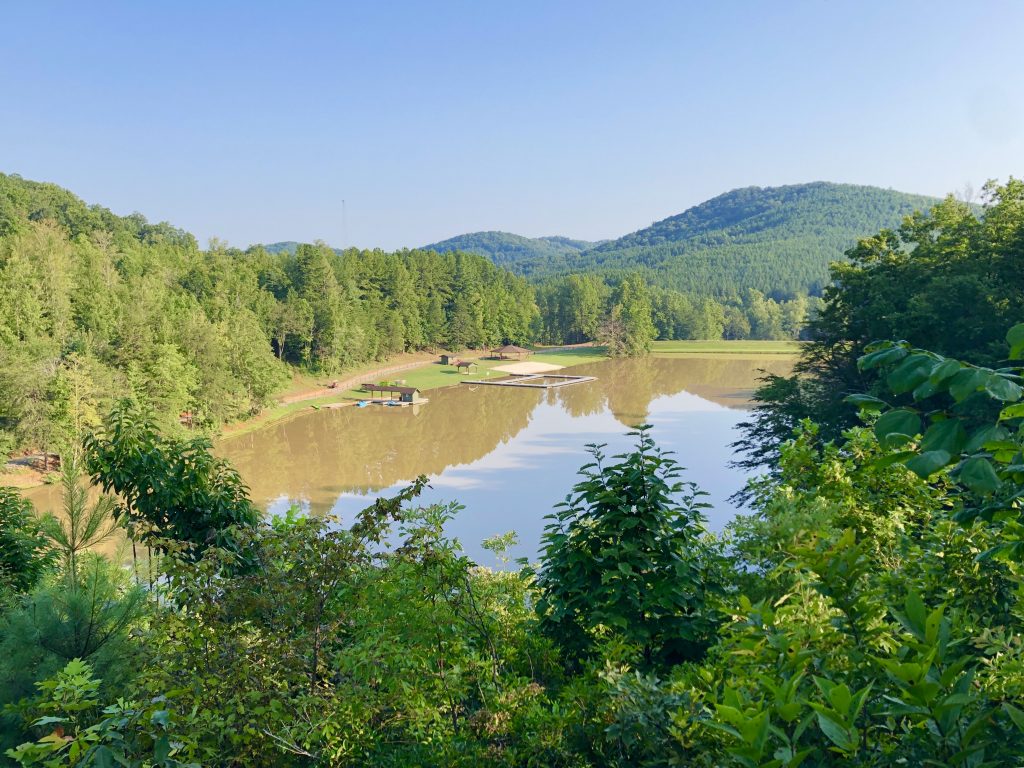 Our cabin accommodations were great — a bathroom, shower, kitchen, AC and even Netflix (though we didn’t use it) — but be sure to rent or bring linens if you go this route because they are not provided. Our cabin was small and cozy with a fire pit outside and screened-in porch that we used for all the meals we didn’t eat poolside. (Ryan and I also said this trip gave us a little boost of confidence to try tent camping with the boys in the future! Hopefully that adventure isn’t too far off but accumulating all the gear you need for tent camping is a little daunting since we don’t have much.)

Since we arrived in the evening on Friday, we limited our Friday night activities to dinner at the pool before settling in for an early night with the hopes that we’d all get a good night sleep and wake up feeling energetic!

Our crew was up around 6:30 a.m. on Saturday and it felt like we were the only ones awake in the whole park! We set off on a family hike to explore the grounds and were greeted with some beautiful views of the Blue Ridge mountains and the lake on the property. 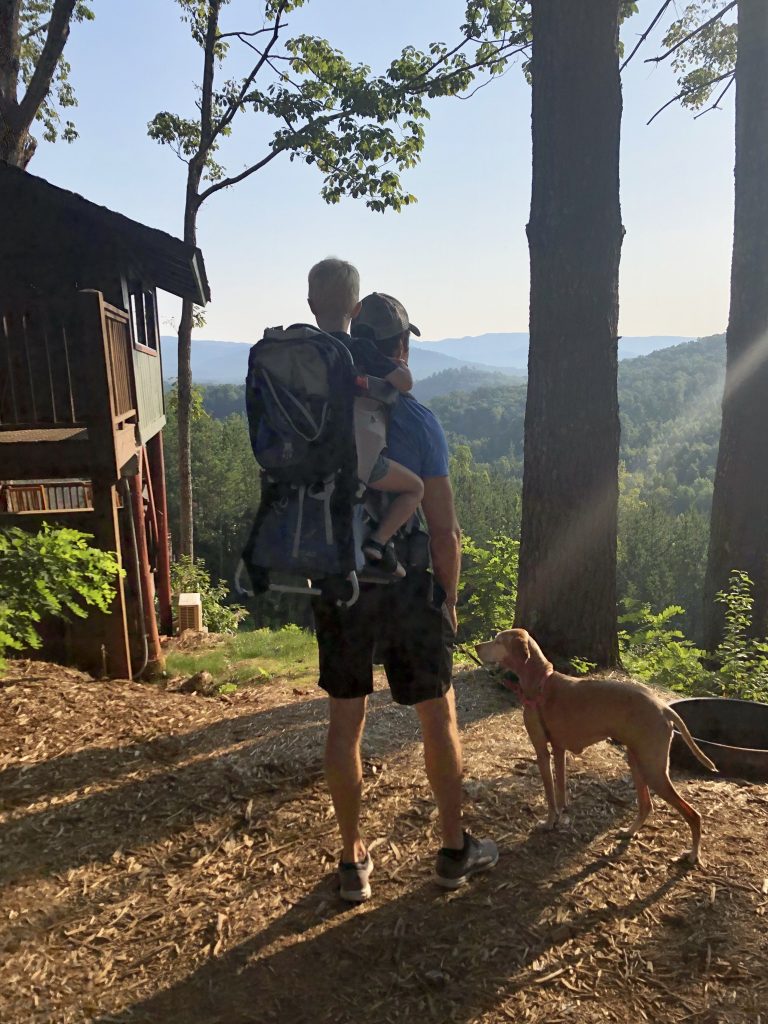 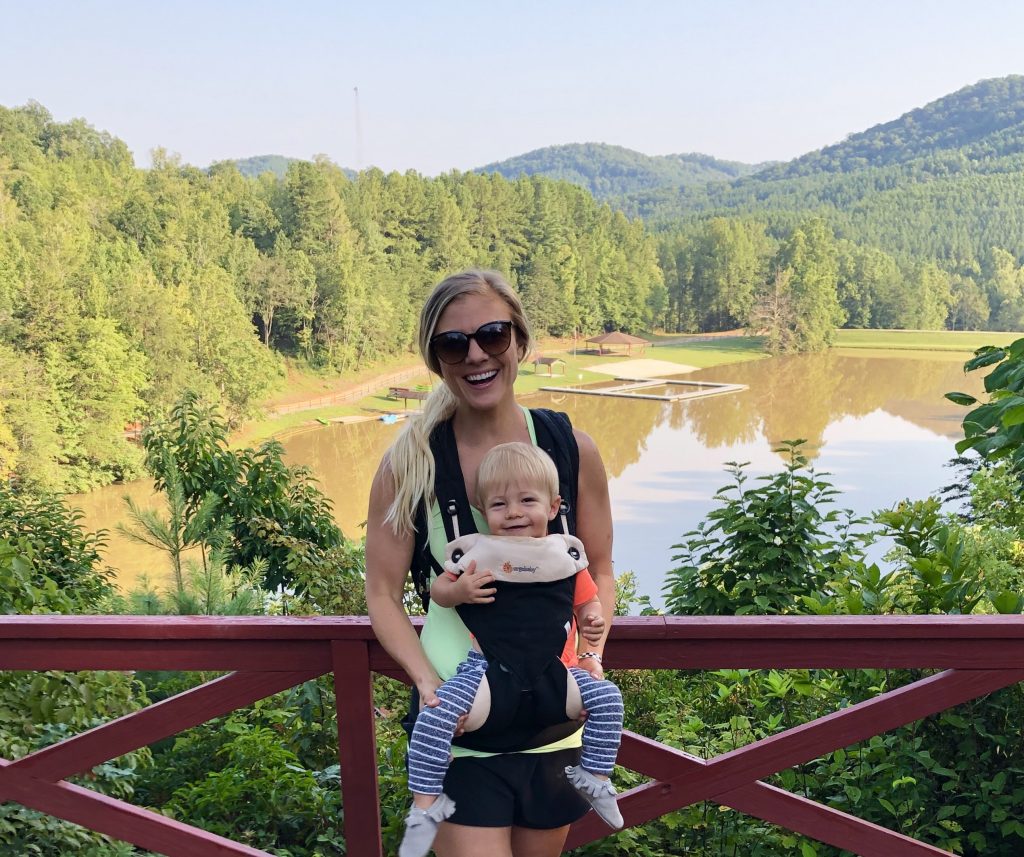 One thing I think I should mention is that the park is very new and since it has only been open for a few months, it’s clear they’re still in the process of finishing certain areas and some construction can be seen around the park. This wasn’t a big deal for our family in the least, but since it was something we noticed, I feel like it’s worth mentioning just in case you visit and expect the park to be complete.

We packed food from home for breakfast and ate at our cabin before our hike but took a break for a morning snack at the park’s playground and jump pad! 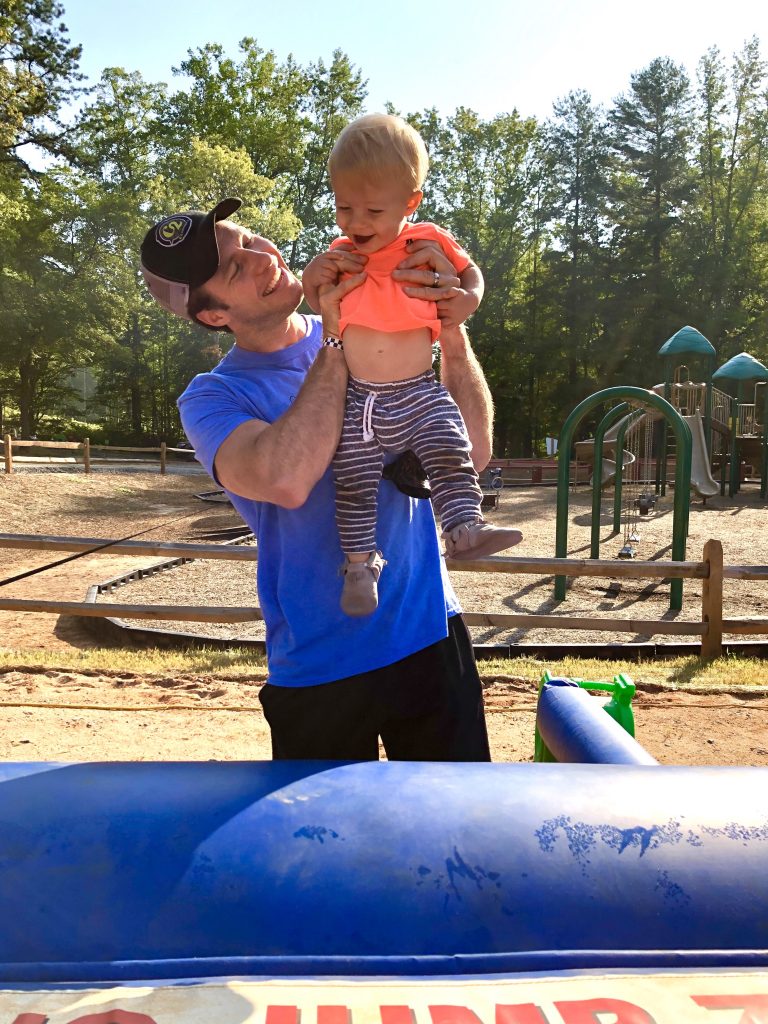 The timing of our hike was perfect because we ended up at the base of the lake right as the morning raising of the flag ceremony began and Boo Boo came out to give all the kids high fives and hugs. I wasn’t sure what Chase would think of a large character, especially one he wasn’t familiar with before this trip, but he was ALL IN and we did our best to make it to all of the character meet-and-greets around the park for the rest of the trip. 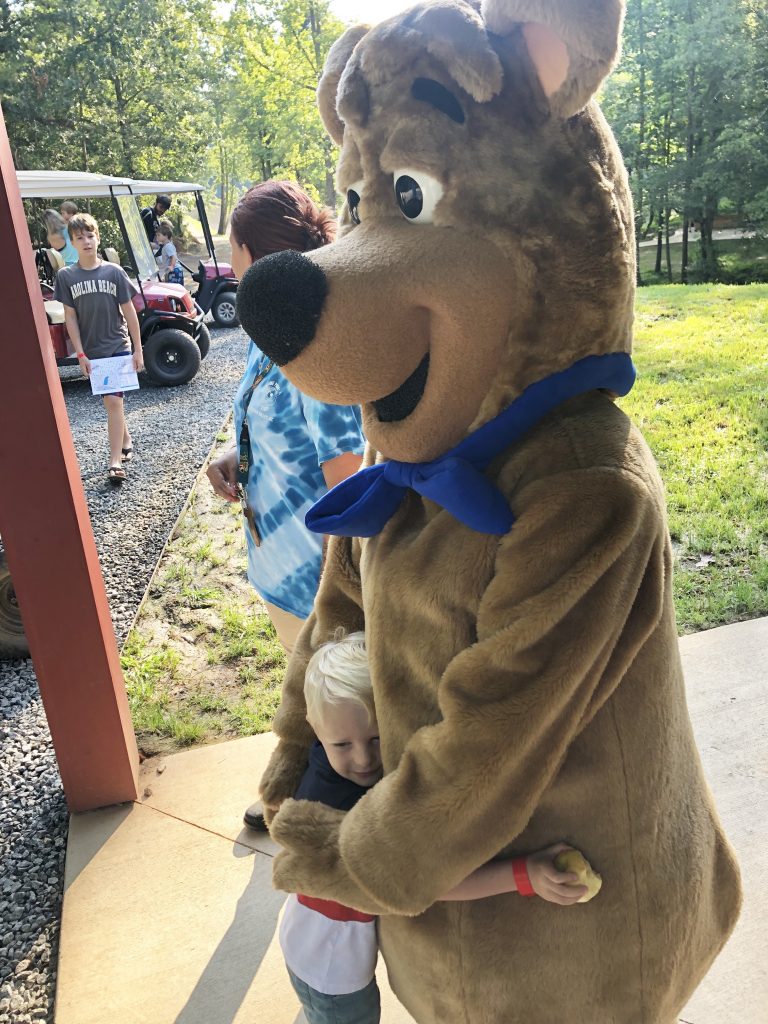 Super random fun fact: I’ve been to Yogi Bear’s Jellystone Parks before and as a young teen I actually dressed up as Boo Boo with a friend whose parents owned one! Crazy, right!? I tried to telepathically tell Boo Boo I understood how sweaty and uncomfortable they likely felt in a hot bear costume at the end of July!

After our morning excitement, we could tell Ryder seemed to be in need of a nap, so we settled him in his pack ‘n’ play in the cabin and Ryan hung back with him while Chase and I went to the activities cabin to check out the craft of the day. Chase was all about the sand art project which is saying something since arts and crafts aren’t usually his favorite thing. (Play is always his priority!) 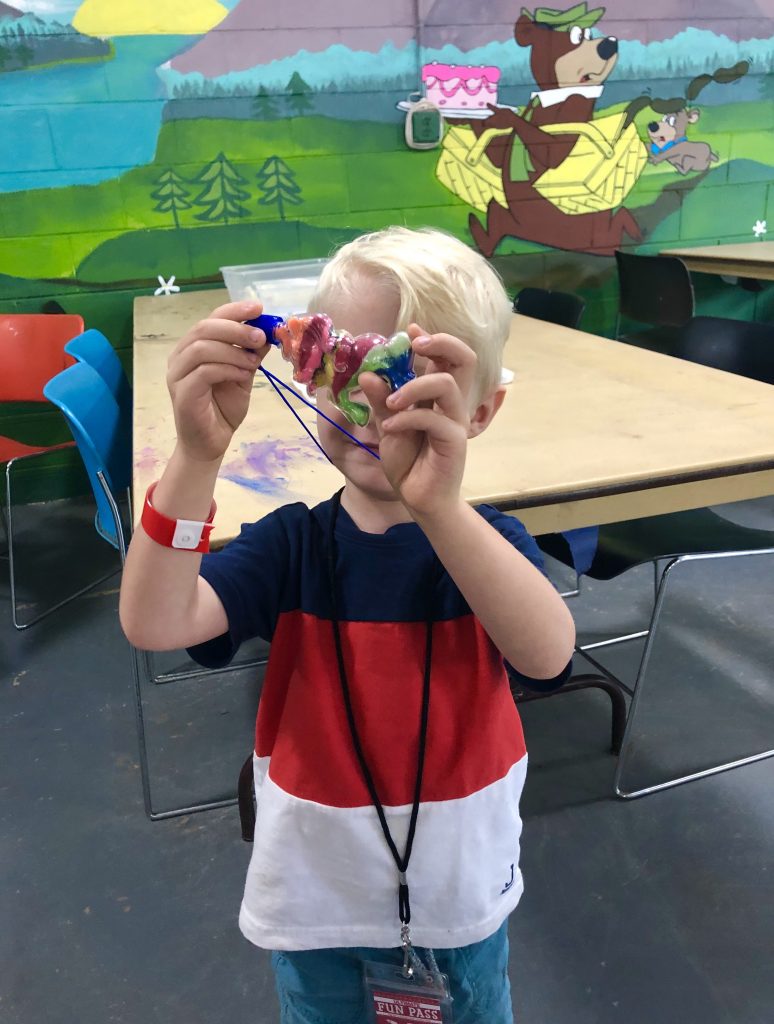 He also got a glitter shark tattoo which blew his mind! (It also blew my mind because it managed to stay on his arm all weekend long, through lots of activities, swimming, etc.) 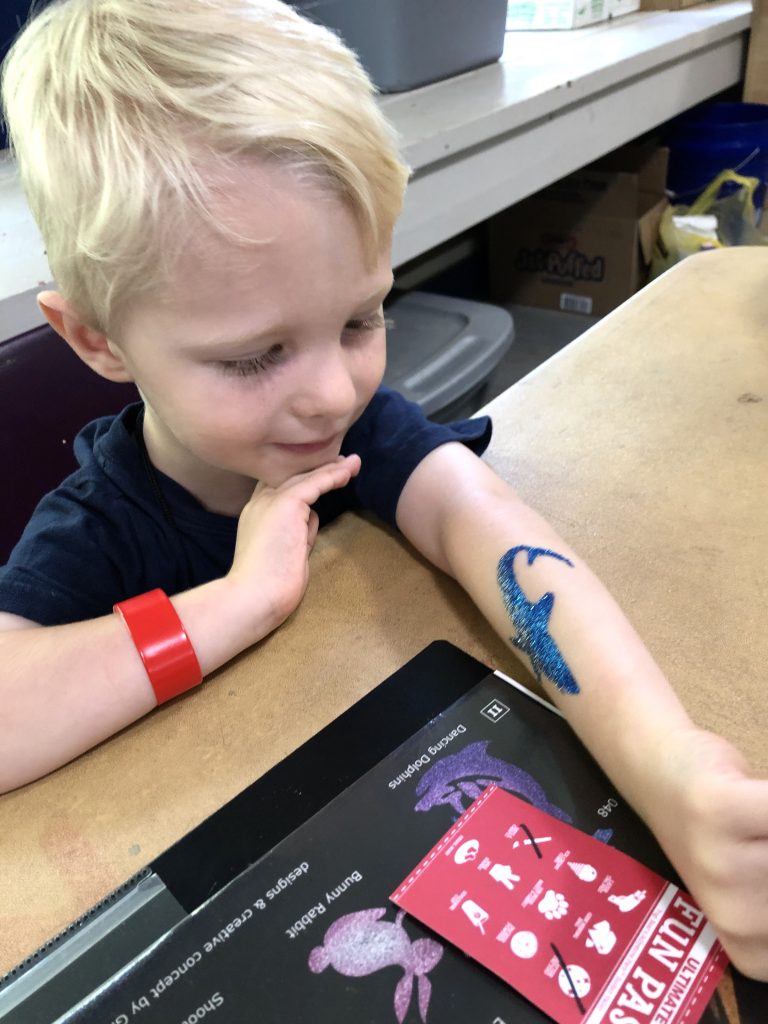 By the time we made it back to our cabin, Ryder was awake and so our crew changed into our bathing suits and hit up the water park and the pool! 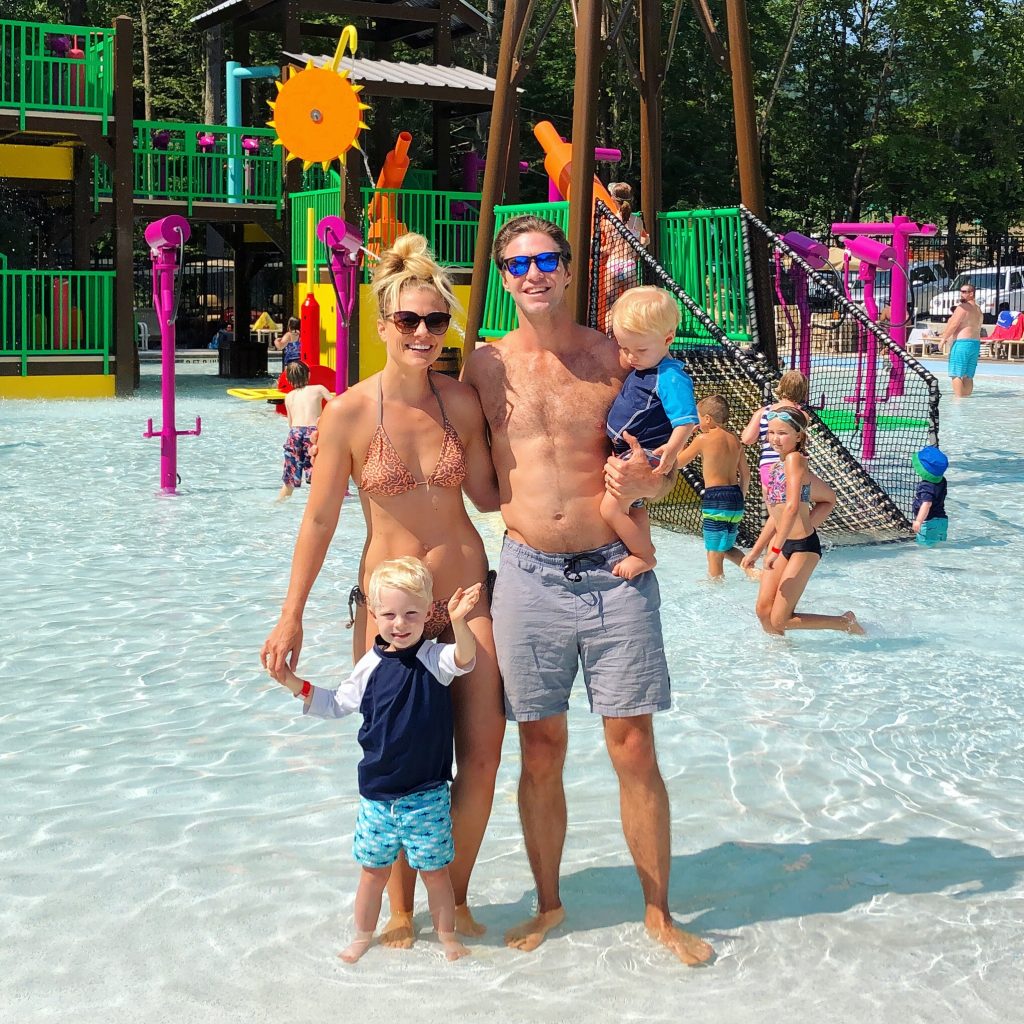 Without a doubt, our family spent the most time at the pool and water zone. It was awesome and the entire water zone has a zero-depth entrance with lots of places to climb, splash, explore and spray each other with various water toys. (We actually enjoyed the large main pool area as well and spent just as much time there!) The water zone was really cool and we loved it but in my opinion it seems to be made for kids who are a bit bigger than our two smaller guys. It had a big bucket/tower that overflowed with a ton of water every 5-10 minutes or so which was a little much for both Chase and Ryder but the older children loved it. 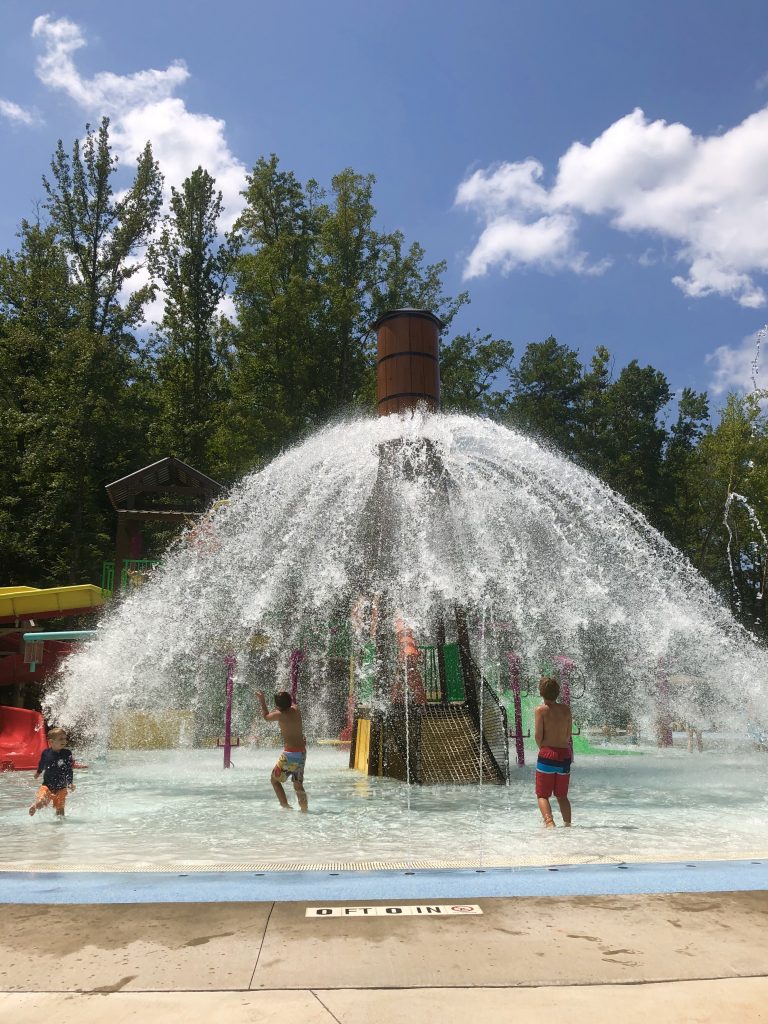 As a mom of younger kids, I wish the bucket overflowed every 30 minutes since it seemed to happen all of the time, but thankfully a little horn went off to alert you and we just bee-lined it out of the range of the big splash whenever we heard the alarm. 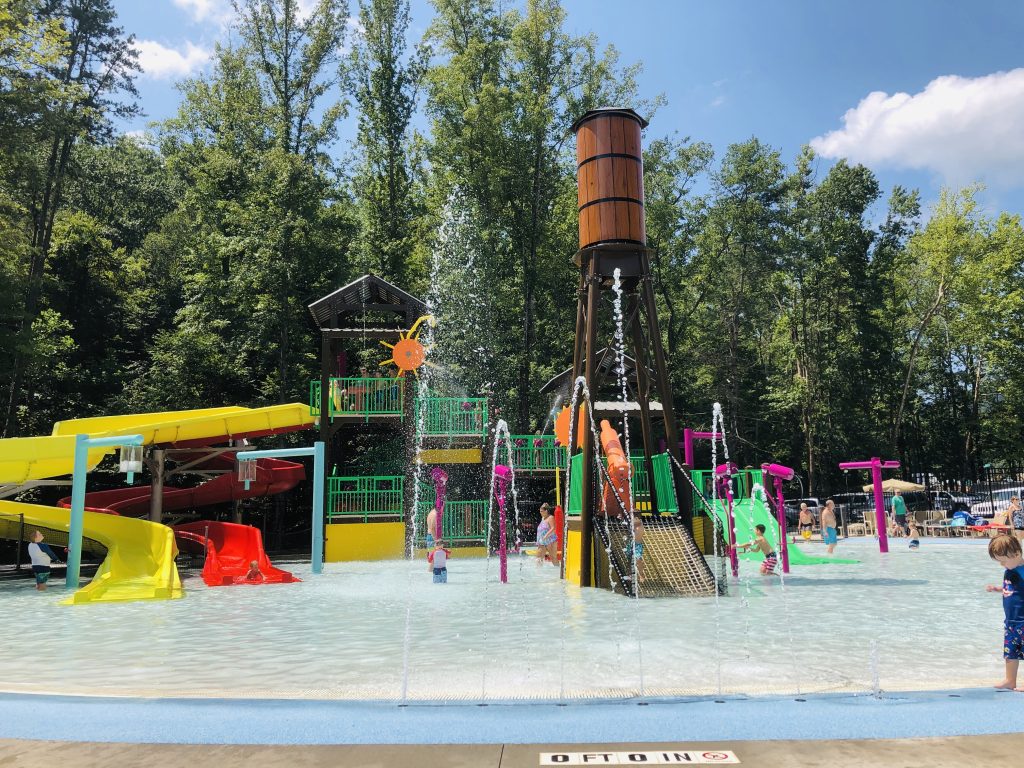 We grabbed lunch at the pool before heading back to our cabin for some downtime. Ryder napped and Chase played for a bit on the porch before Ryan took him fishing at the base of the lake as I hung back with a sleeping Ryder.

I texted Ryan once Ryder was up and then he and Chase swung by our cabin on the golf cart to pick us up before we made our way over to the gem mining area of the park. 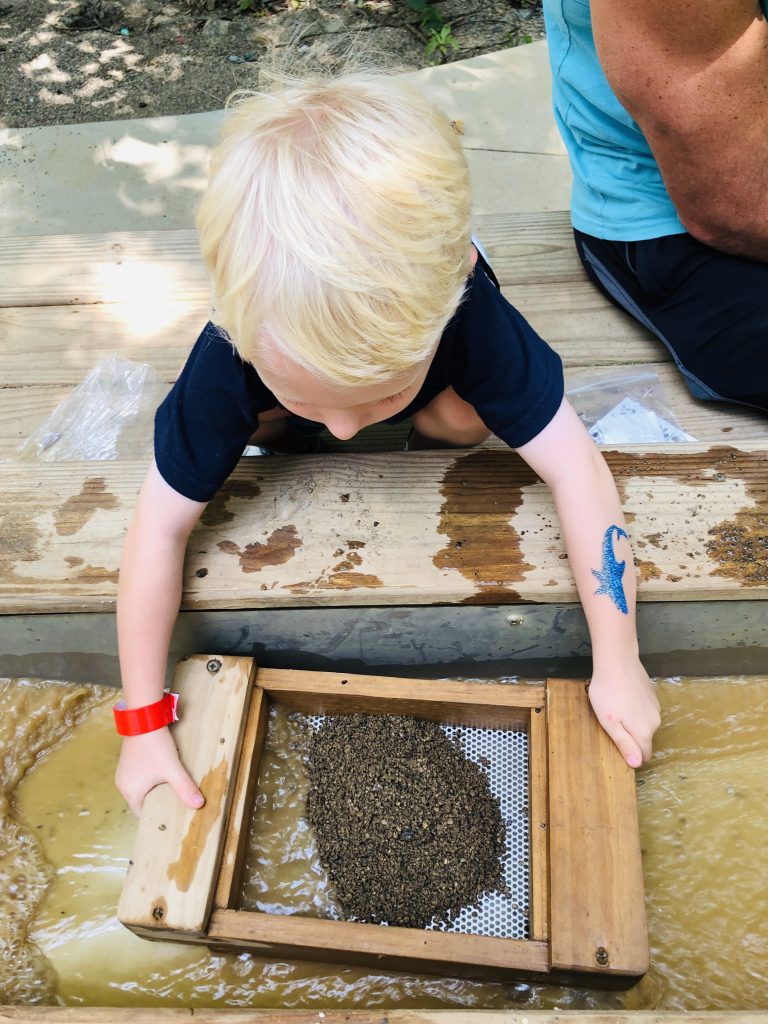 We got a bag of dirt from the camp store and a gem key to let us know what kind of gems to look for as we sifted through the dirt. 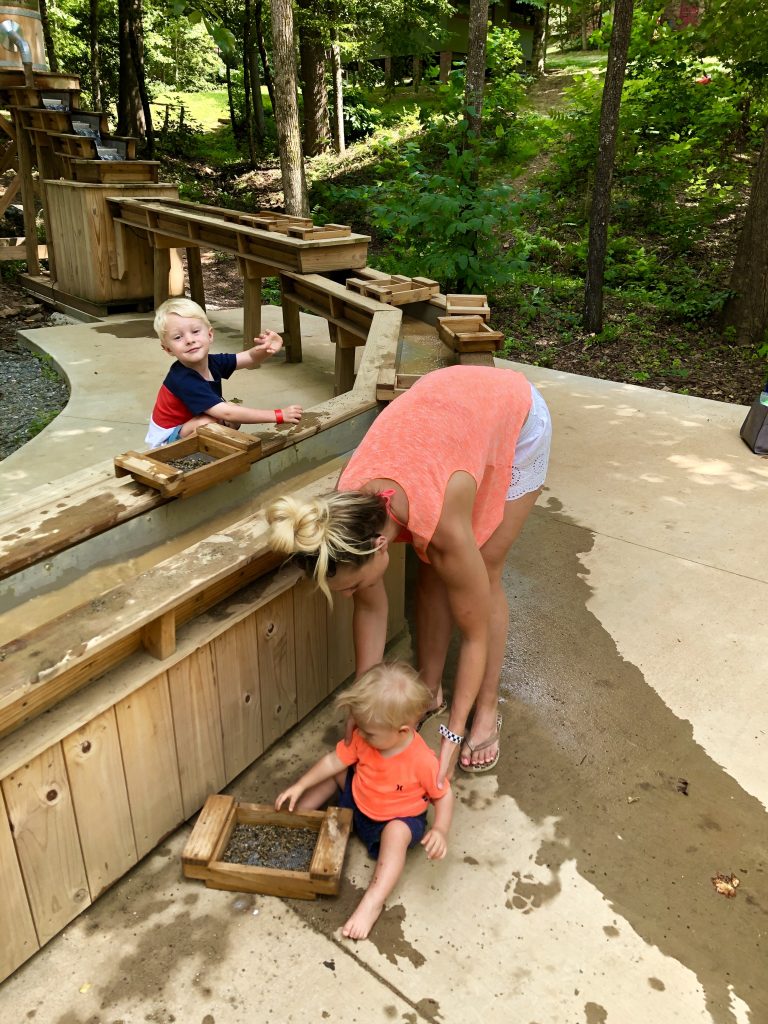 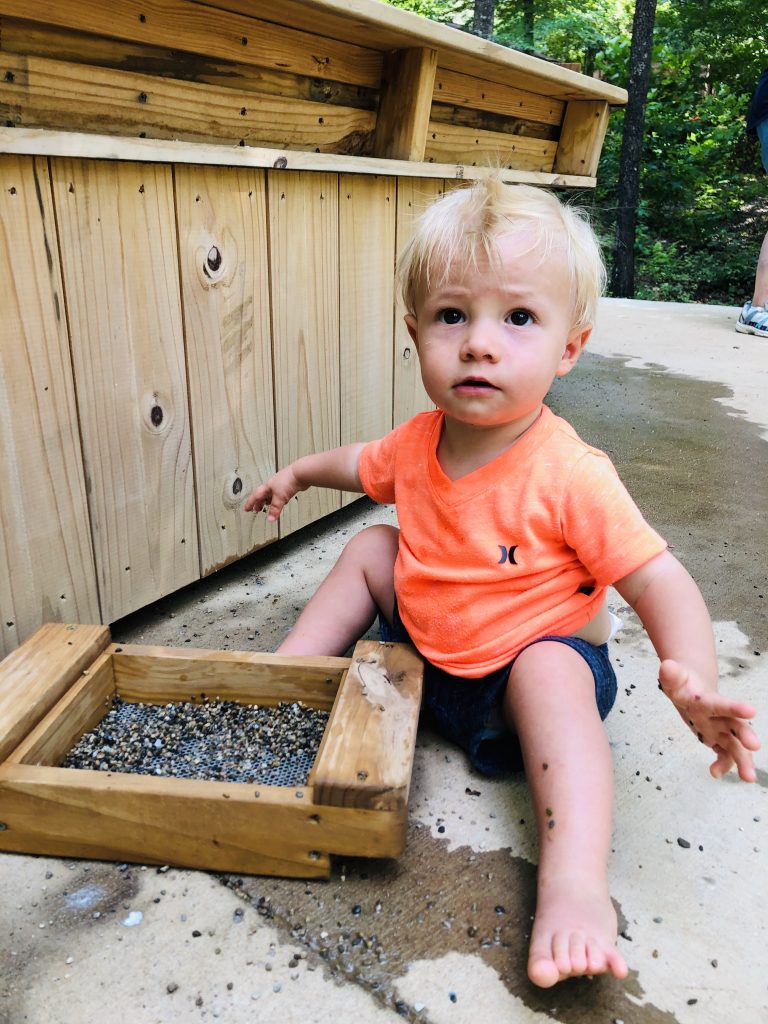 We found a lot of gems and then grabbed a couple of milkshakes from the poolside cafe before making our way to the jump pad and then the Lodge for another character meet-and-greet with Boo Boo. 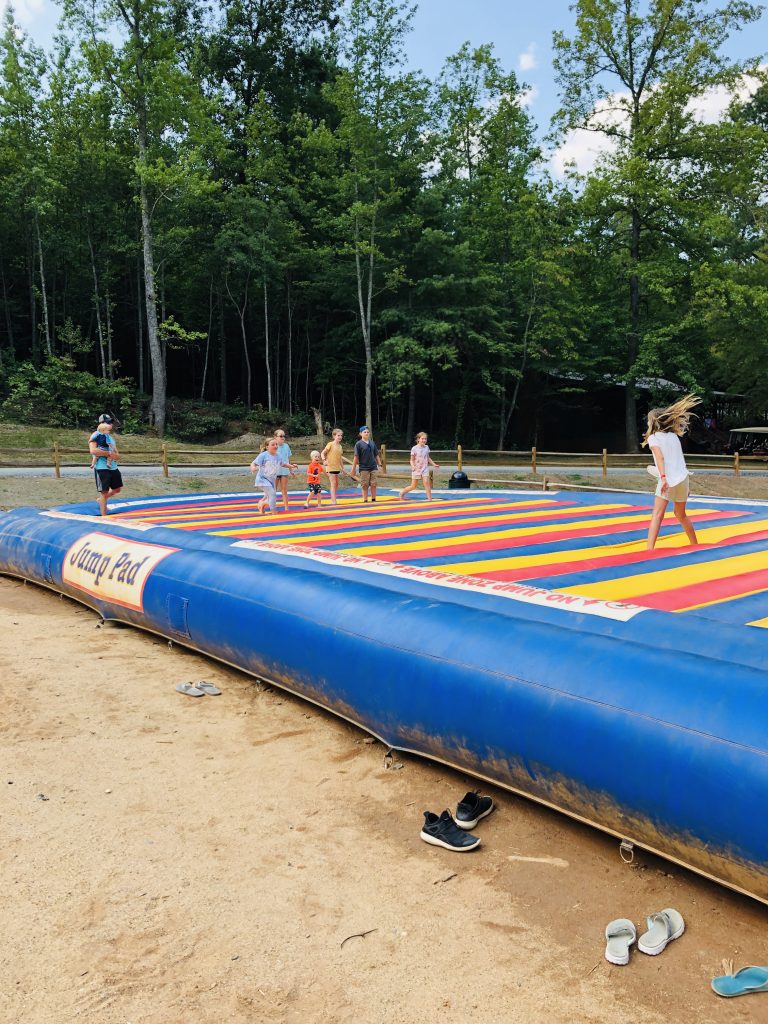 As you can see, Ryan got roped into playing a few rounds of “statue” with the kids at the jump pad. Ha! Also, on another note, I was SO impressed with how friendly the kids were toward Chase on the jump pad. He was by far the youngest by a few years and they didn’t bat an eye when he seemed to want to join their game. Please oh please let us raise our boys to be this inclusive! 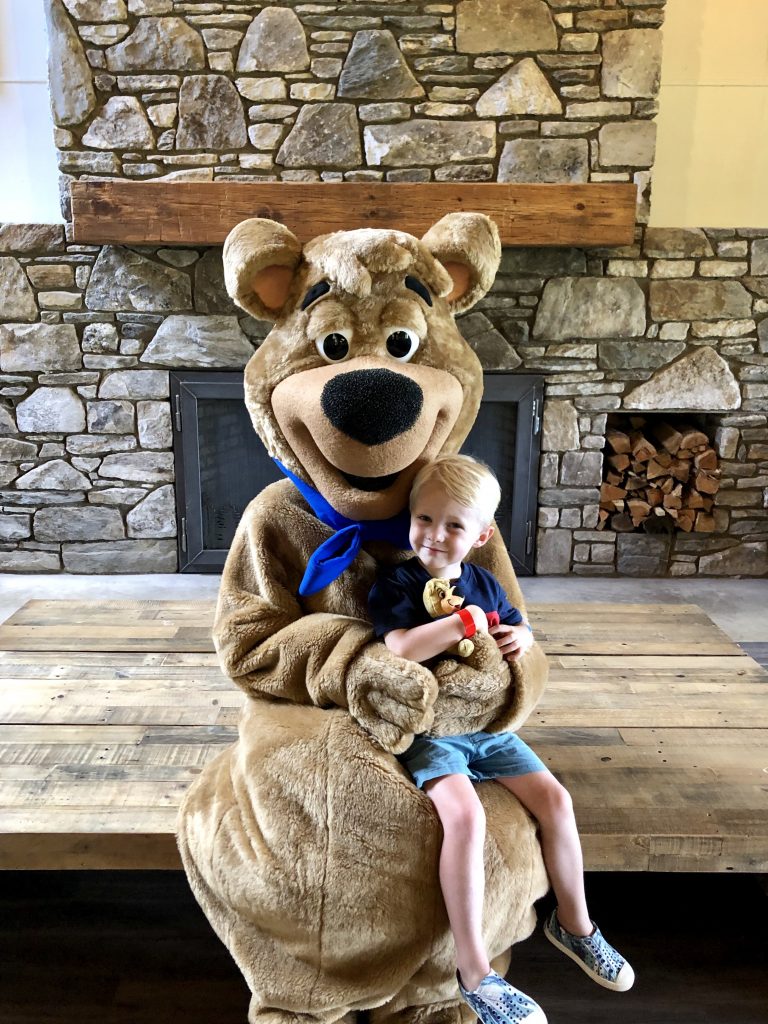 As for the rest of our night, our evening plans centered around s’mores!! We ate dinner on the porch back at our cabin and then I settled Ryder down for the night as Ryan and Chase headed off to pick up s’mores supplies. 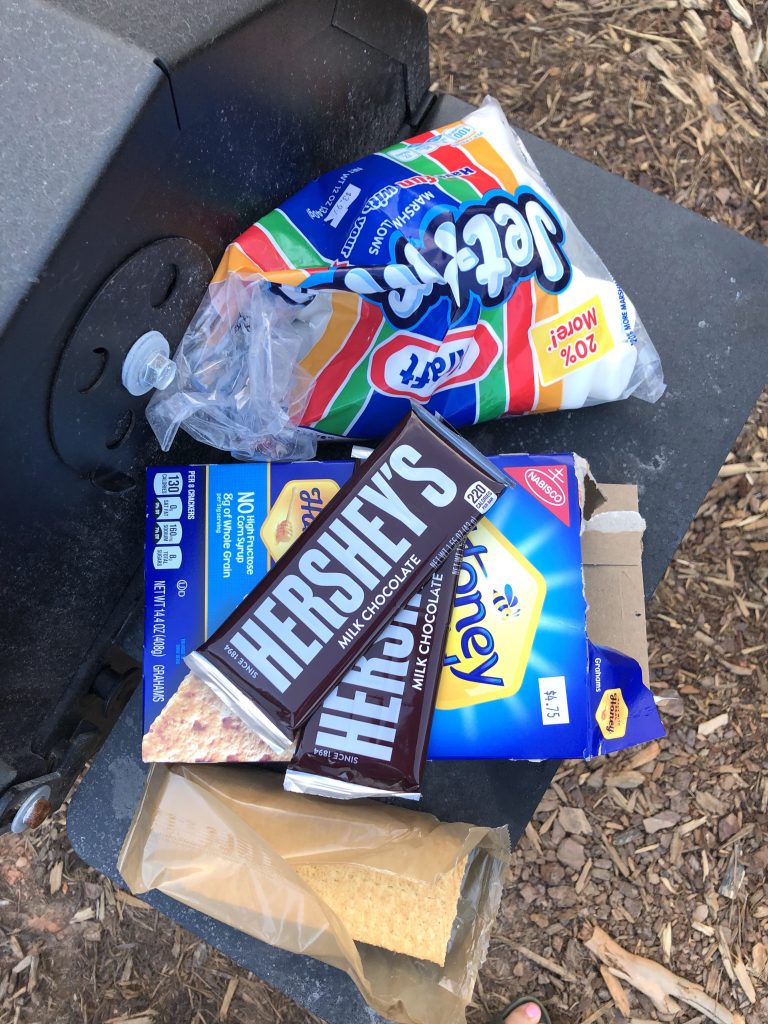 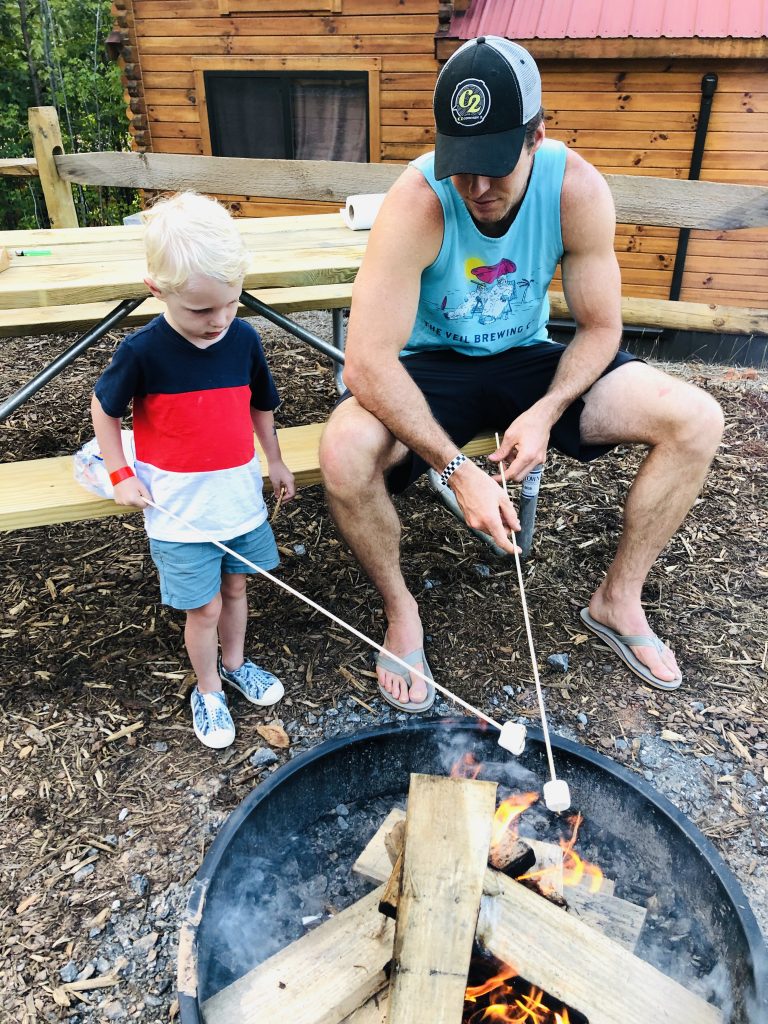 After such a full day, Ryan and I expected Chase to be d-o-n-e after s’mores but he was still happy and energetic and very interested in the evening glow stick hay ride so we had some mom and Chase time together while Ryan hung back with sleeping Ryder and Sadie. 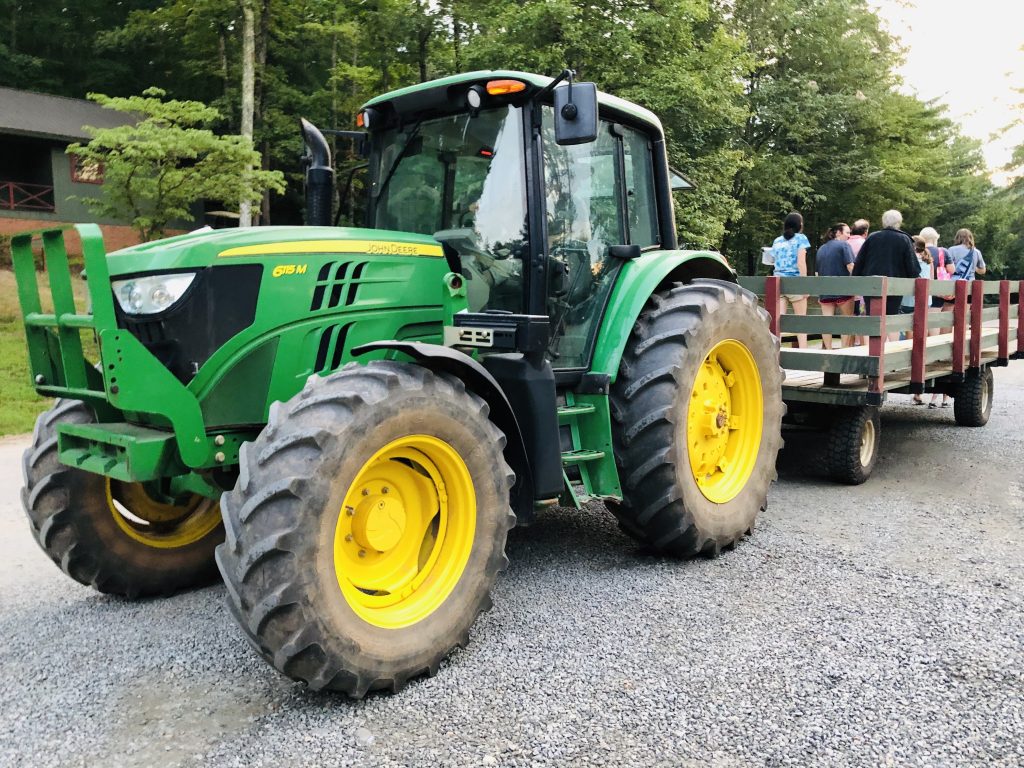 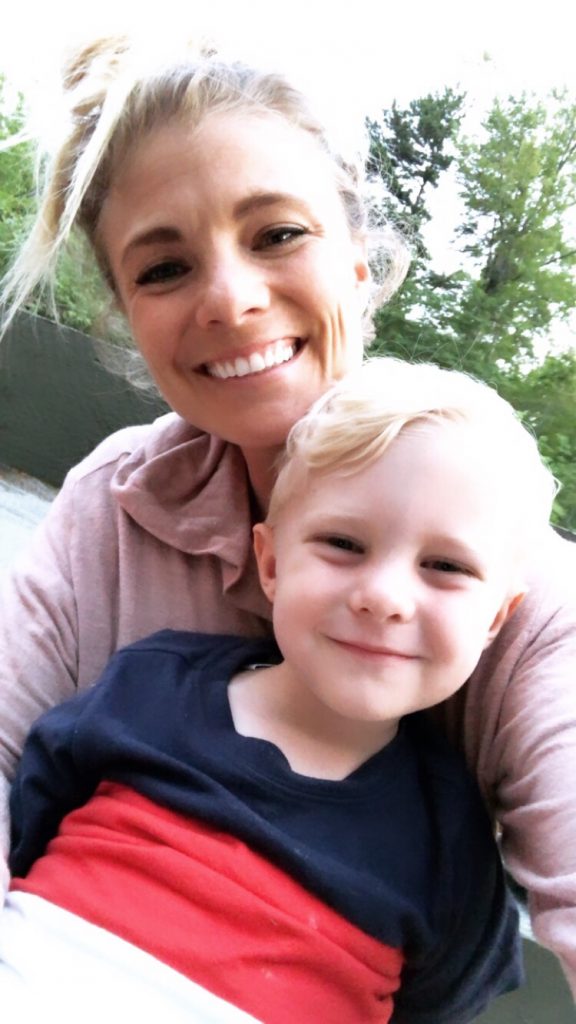 The hay ride was really cute and they passed a microphone around and let the kids tell silly jokes during most of the ride which was adorable.

We arrived back at our cabin and made another round of s’mores with Ryan before calling it a night.

Sunday was check-out day but we managed to fill our morning at Jellystone with mini golf, another character meet-up (I’m tellin’ ya, this was Chase’s JAM) and some more time on the jump pad before heading back home. 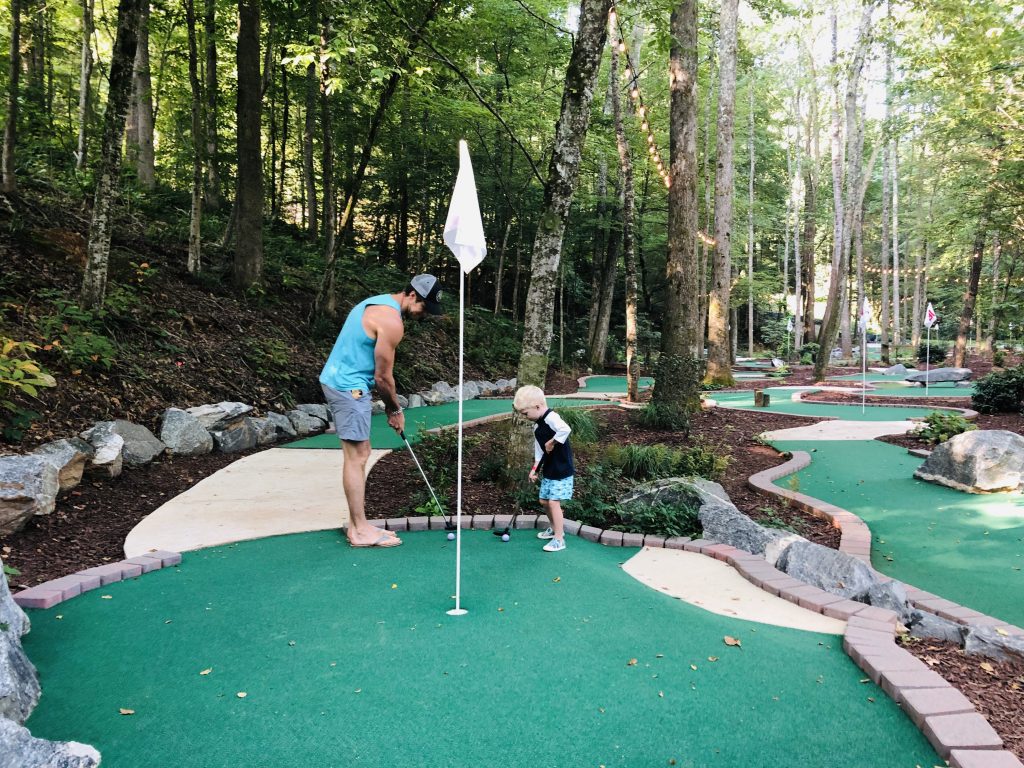 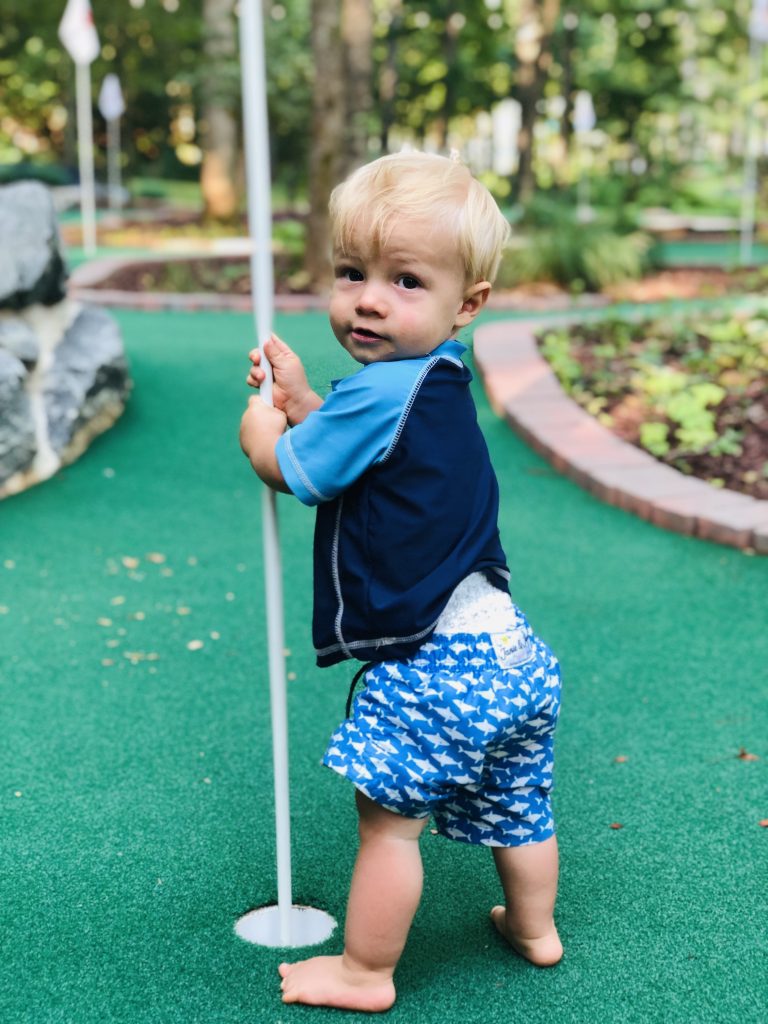 We hoped to spend an hour or two at the pool before driving back to Charlotte (hence the boys’ pool clothes) but the pool didn’t open until 10 a.m. and we could tell Ryder was needing a nap on the earlier side of the day so we figured we should make our way home to avoid meltdown territory.

Arriving home in the early afternoon actually worked in our favor because it gave us a chance to get organized for the week ahead. TODAY is actually Chase’s fourth birthday so we have some fun things planned and then my father-in-law is arriving in town for the week tomorrow. We’re clearly trying to cram in as much last-minute summer fun as possible right now!

I hope you all have a great week and thanks so much for stopping by PBF today!