Navigation
Holy cow that weekend was a fast one. I suppose when a weekend is filled with a couple of Christmas parties, church and hitting a few work-related deadlines, the hours slip away quickly but I feel like it was just Friday morning and I was typing up my usual Things I’m Loving Friday post! Yeesh.

Ryan and I were both up rather early on Saturday. Sadie was a little restless and jumped up off our bed at 5:30 a.m. to get some water to drink which woke us up and then we were both too wired to fall back asleep. Sadie is lucky she is a cute alarm clock!

I made myself an egg sandwich while Ryan headed off to the gym and settled on the couch with my devotional before sneaking in an hour or so of work before Chase was up. I had plans to take an 8 a.m. boot camp class – my first Saturday morning workout in weeks – and it was really nice to kick off the weekend the sweaty way!

I was home by 9 a.m. with just enough time to shower and assemble the holiday puppy chow I made the day before to bring to Alexis and Dan’s holiday cookie exchange party. I followed this recipe but added a large bag of red and green M&Ms to the mix at the last minute for a festive touch! Any yes, I realize puppy chow isn’t technically a “cookie” but I brought cups and baggies for people to scoop it up to bring home with them and it seemed to be a hit! 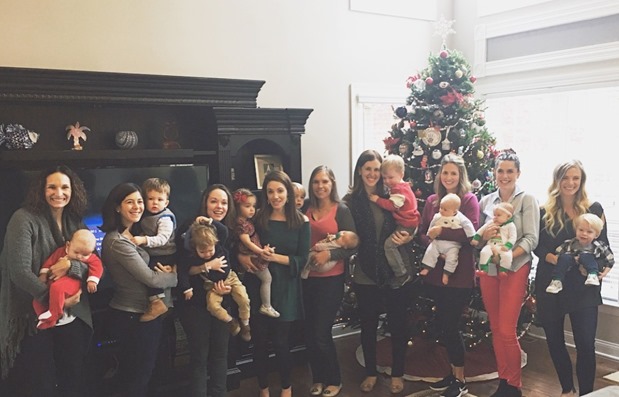 We were really looking forward to the party since last year we had an amazing time, despite the sheer terror on Chase’s face when he met Santa for the first time after my friend Alexis’ husband dressed up in a big red suit to surprise all of the kids. Thankfully Chase’s encounter with Santa Dan this year was a lot more mild and he gave Santa a high-five but firmly resisted any attempts we made at encouraging him to sit on Santa’s lap. At least we avoided any tears!

Everyone began saying their goodbyes around noon so we could take our kids home for naptime and while Chase slept, I got a jump start on making  some cilantro shrimp and a sweet potato casserole we brought to Laura and Steve’s ugly sweater party later that evening. I also worked for a solid two hours right up until Chase was awake again. Ryan, Chase and I then curled up on the couch to watch the tail end of the UCF vs. Memphis football game (Ryan and I both attended UCF) and the game was a nail-biter… and that’s coming from someone who rarely gets super into sports. Thankfully UCF pulled off a win and continued with their undefeated record. Woop!

We arrived at Laura and Steve’s house around 5:30 p.m. and I was immediately so impressed with the beautiful spread Laura put together for our crew, complete with a sweet kid’s table for Chase and three of his best friends. 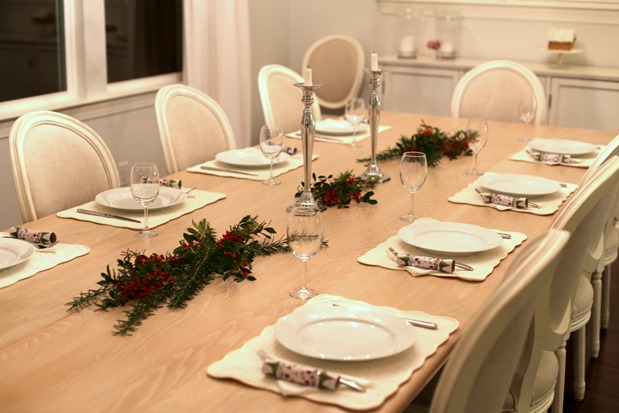 She really is the most incredible hostess and always blows us away! 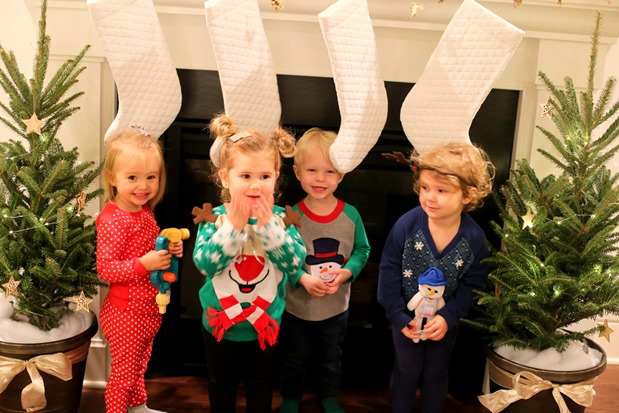 Ryan, Chase and I had the best time with our friends and enjoyed an amazing holiday meal of ham, roasted carrots and potatoes, homemade bread, sweet potato casserole, roasted Brussels sprouts and an arugula pomegranate salad. I had to go back to fill my plate a couple of times because everything was so tasty! 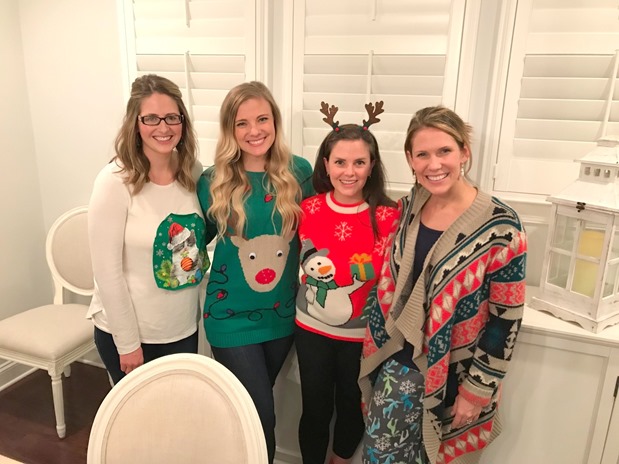 (If you happen to need a sweater for an ugly sweater holiday party this year, I ordered mine on Amazon Prime! Rudolph’s nose lights up for an extra-tacky treat.)

We laughed a lot with our friends and Ryan and I left feeling very grateful for the people we’ve met in Charlotte since we moved here a few years ago. Sometimes it’s hard to be far from family but they make it a little easier! 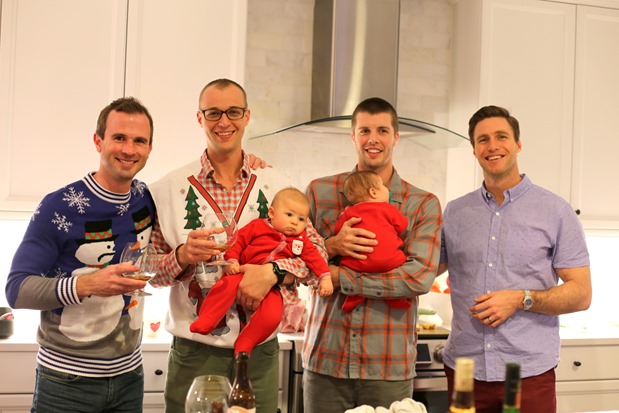 Sunday morning began with church and a little grocery shopping! 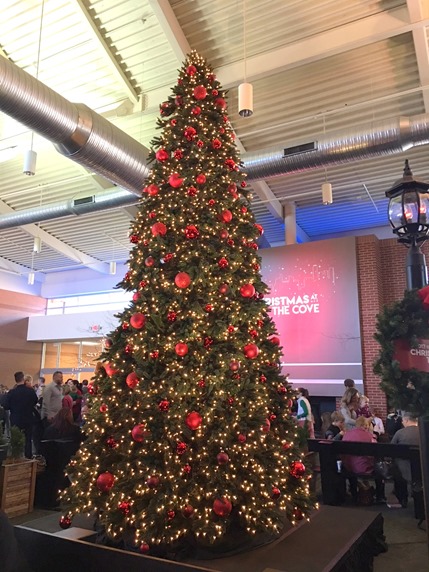 Chase fell head-over-heels in love with a giant $30 stuffed giraffe at ALDI but thankfully I pried him away from it and now Ryan and I are wondering if it’s something we should consider for Chase for Christmas since we have nothing for him other than this stomp rocket toy so far. 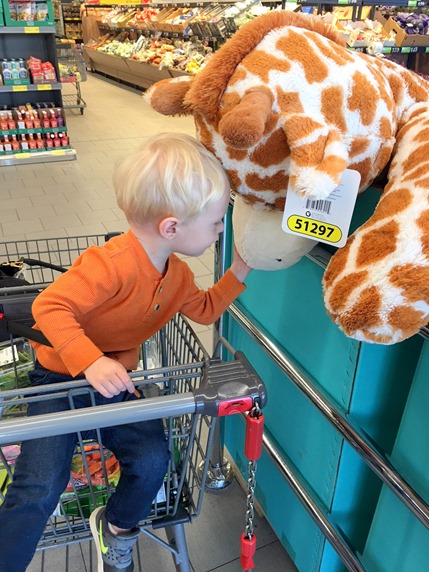 Can you tell they had a moment? Haha!

To those with past HUGE stuffed animal experience: Is this a purchase we would instantly regret? Chase loved the giant stuffed bear at his friend Lily’s house as well but I don’t know if it’s one of those novelty items that is cool for 5 minutes and then they ever touch it again. I think I’m romanticizing the idea because I have visions of Chase leaning up against his new beloved giraffe to read his books but who knows if that would ever actually happen!?

We arrived home ready for a quick lunch before Chase took his nap and Ryan headed off to the gym. I worked on making and photographing three recipes in the kitchen and by the time I was done our kitchen looked like it was hit by a tornado and I wished with all my might I could will the dirty dishes away. Ooph! I had just enough time to sit back down on the couch with my lap top and begin typing up this blog post before Chase was awake and Ryan and I were ready for a little more quality family time before the weekend officially came to a close.

We spent the rest of Sunday close to home, playing in the backyard with Sadie and reading Christmas books in our pajamas. I crashed hard in bed after reading a few chapters of my latest book.

I really hope you all had a wonderful weekend and appreciate you stopping by the blog today! Have a great week!