A bubbly visitor added an element of fun to our weekend! 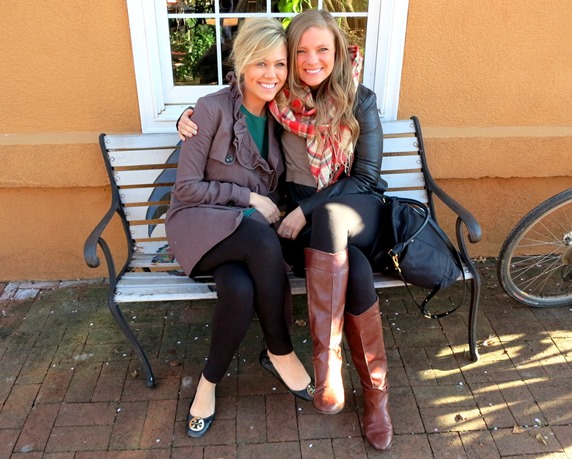 My friend Ashley arrived in town on Saturday! Ryan and I spent as much time as we could with one of my very best friends from college and were thrilled to have her back in Charlotte! Ashley has now been here three times since we moved (once in the fall before Kaitlyn and Kailon’s wedding and again in February) and I told her my personal goal is to get her here for every season. We’re on track so far! We just need a summertime visit to round out the year!

On Friday night, Ryan and I laid low and grabbed Thai food at a new local restaurant, Thai-Sushi 101, in Huntersville. We split the Tom Kha Gai soup which may be one of my favorite soups ever. 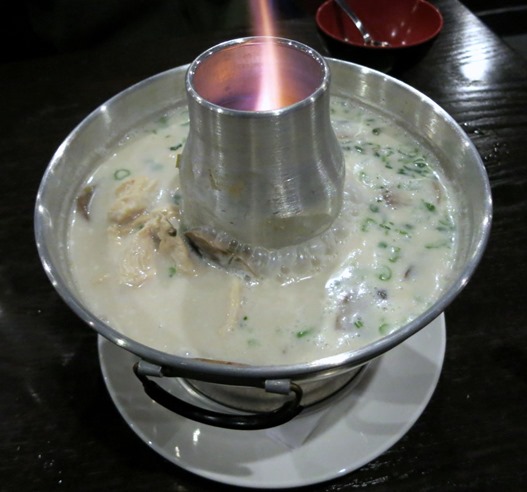 I cannot get enough of the creamy coconut broth and bright lemongrass flavors.

For my entrée, I selected the duck lettuce wraps and had no problem clearing my plate. 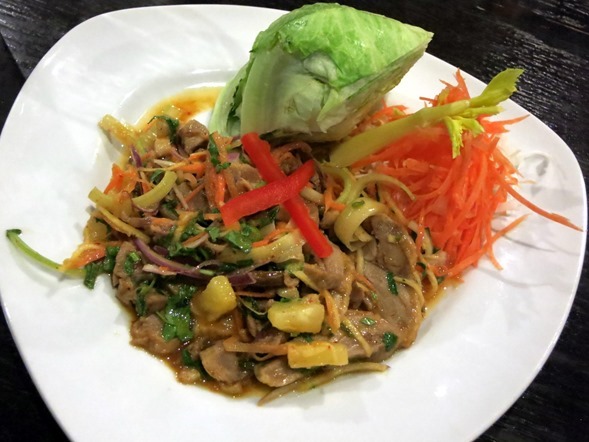 I also helped Ryan with his Pad Thai since his portion was rather large. We both really liked everything and will definitely return in the future!

On Saturday, our day began with a workout (Pure Barre for me and a gym workout for Ryan) and then we met up back at home to take Sadie on a two-mile walk before lunch. We spent most of the day working around the house before it was time to head to the airport to pick up Ashley!

Right before we left, I had Ryan snap a quick bump pic for my upcoming 21-week update and we both agreed I am definitely looking more and more pregnant! 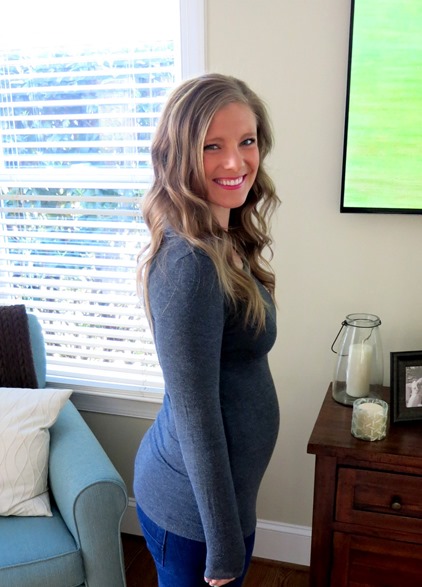 I also managed to get myself out of leggings – a pregnancy miracle for me! – and into a pair of James boyfriend maternity jeans that I bought on sale from Nordstrom Rack. I was surprised by just how comfy they were and may have a hard time returning to regular jeans after our baby is born…

Oh! And I spent a little extra time curling my hair on Saturday and followed a YouTube tutorial from Amber Fillerup, an apparently crazy-popular woman I randomly started following on Instagram because I loved all of her whimsical braid pictures. Her hair is gorgeous. I almost singed off four fingers in the process of following her tutorial, but I liked some of her tips for looser/softer waves like rubbing your curls between your fingertips rather than brushing them out.

Anyway, once Ashley landed, we scooped her up and immediately drove to dinner at Smoke, a modern barbeque hotspot in Birkdale village that we visited for the first time a couple of weeks ago when Ryan’s cousin was in town. (My friend Kristen and I actually ate lunch there last week, too, so you know I’m quite a fan!)

Ashley and I both ordered the barbeque chicken salad (I am seriously in love with it!), but the appetizers we shared with Ryan were definitely something to write home about! 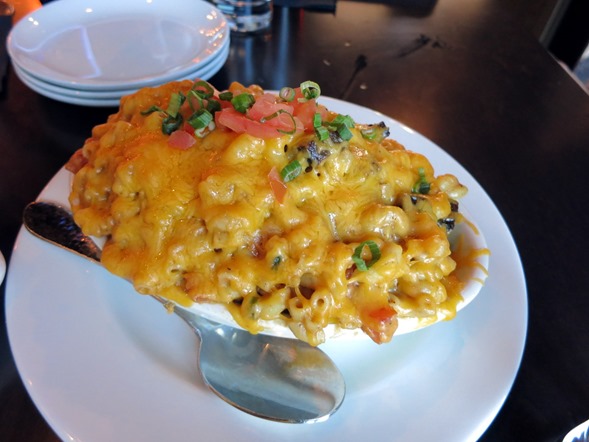 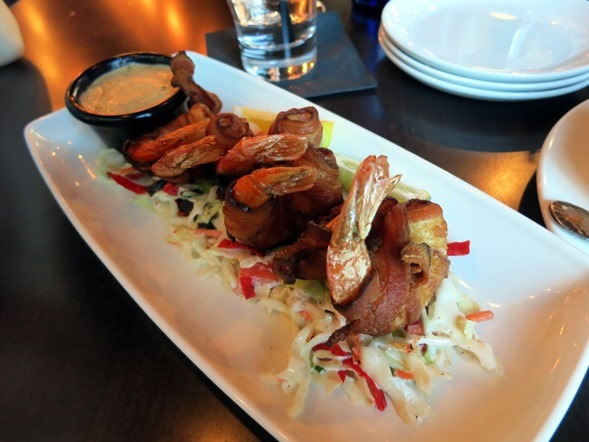 We split the bacon-wrapped shrimp and the burnt ends mac and cheese and gave them both rave reviews.

After dinner, the three of us headed home and Sadie almost peed herself with excitement when Ashley walked through the door! We opted for a night in on the couch in our pajamas and I loved every second of it!

On Sunday morning, the three of us woke up rather early and, at Ashley’s request, returned to Toast in Davidson for brunch! Ashley is a great dining buddy because though we both wanted eggs for breakfast, we had a craving for French toast as well and split it as a side in addition to our eggs. 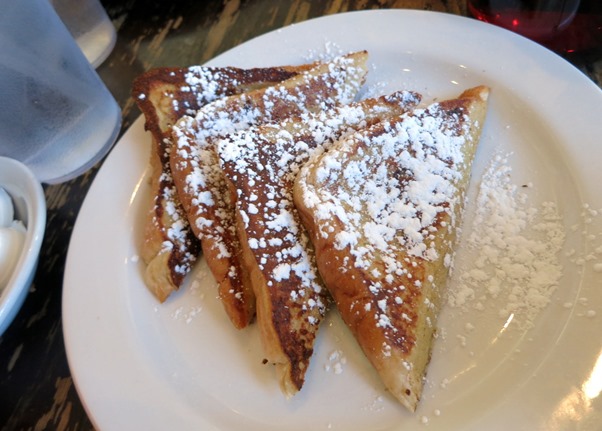 The more dishes I get to try during a meal out, the happier I am!

After brunch, Ashley and I headed out on a 4+ mile walk with Sadie because the weather was beautiful! It was definitely chilly, but the sun was shining and a jacket and scarf kept us plenty warm.

Once we returned home, Ryan, Ashley and I drove to the hotel where Ashley is staying for the next couple of days (she planned a conference in Charlotte which is what brought her here in the first place) and spent a few hours in the hotel bar, eating lunch and watching the Louisville/Michigan State game.

I ordered a hot turkey club with onion rings and, yet again, had no problem polishing off every bite. 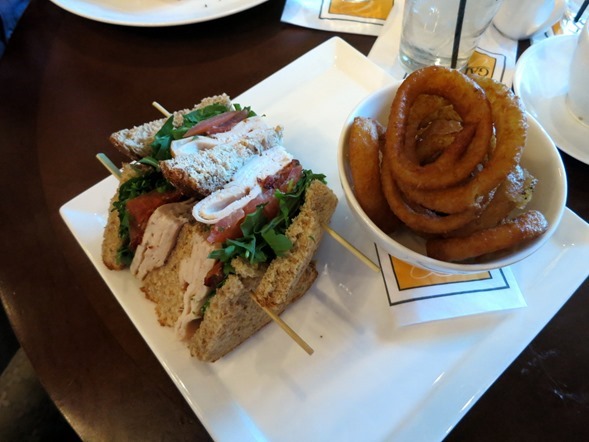 Ryan and I eventually hugged Ashley goodbye when she had to get everything ready for her conference registration and drove back home for a hot second before it was time to head back out. Ryan had a 6 p.m. soccer game on the agenda and I had plans to meet up with my friend Chandra to watch since her husband Kevin is on the same team.

Unfortunately, about 15 minutes into the game, Ryan really hurt his knee. I felt so bad for him and am hoping he’ll get some answers about what happened during his doctor’s appointment today. Poor guy!

We made it back home a little before 8 p.m. and ate dinner on the couch while Ryan iced his knee and got in bed nice and early which was fabulous.

And now we’re all caught up. I hope you had a great weekend!