Navigation
If I could sum up our weekend in one word it would be SNOW! We had our first snow of the season in Charlotte! 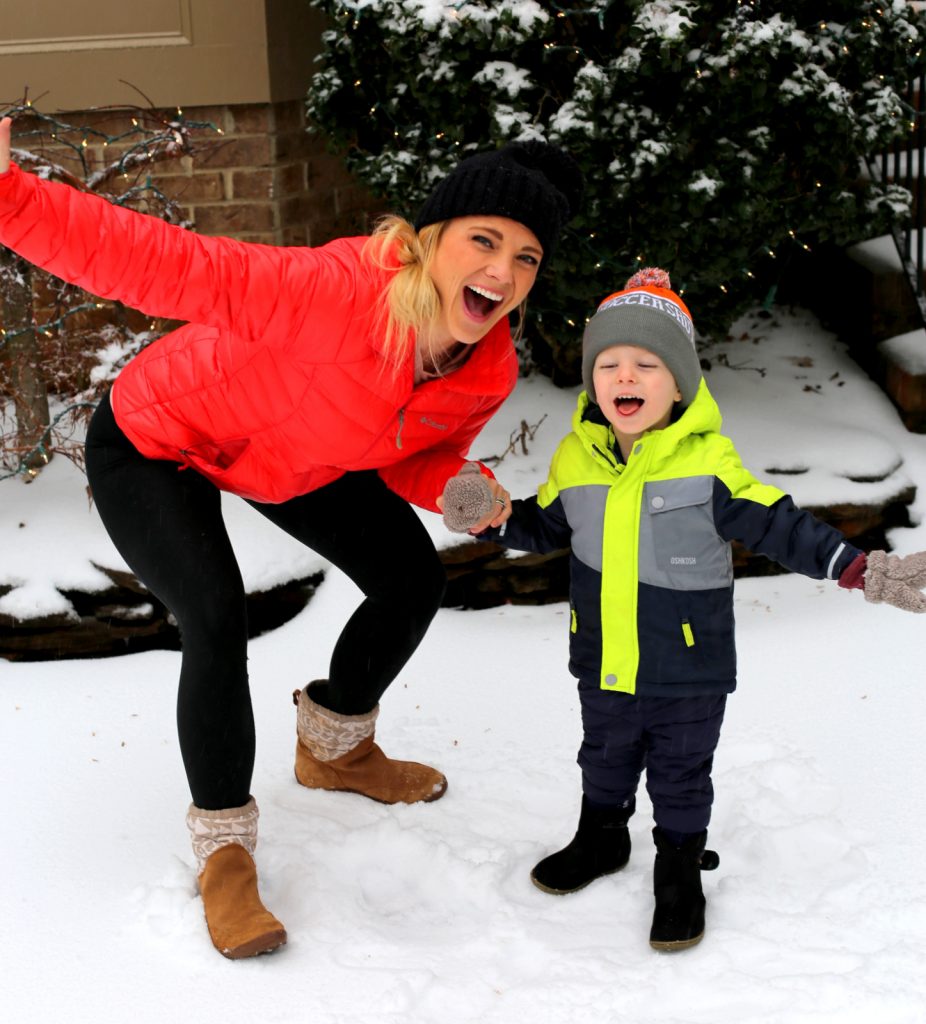 As the weekend approached, pretty much all anyone could talk about in our area was the impending snowstorm. I know I lived in Florida for 10 years, but the former Illinois girl in me is still getting used to just how much everyone freaks out over a small amount of snow. Buuut, the fact is, our area isn’t well-equipped to handle a lot of snow. Everyone gets all worked up at the thought of a few inches and shovels, boots, snowpants, sleds… everything sells out at local stores in a flash! We missed the boat on snowpants for Chase but somehow his new high snow boots and high socks helped cover the exposed calf skin from his way-too-small snowpants from last year. Thankfully we nabbed sleds from Lowe’s last spring when they went on sale so we were prepared for plenty of snowy fun!

The snow began to fall late Saturday night and started letting up a bit by Sunday evening. Schools are all closed today and Ryan is working from home. We’re hoping to have the chance to get out and play some more today before it all melts away!

We woke up on Sunday to a wintery wonderland but had to put the breaks on playtime for a few hours because the snow that was coming down in the morning was more like sleet. This ended up working in our favor because we were able to knock out a few projects around the house. I tackled a DIY project that’s been on my to do list forever (more on this soon!!) and it turned out so well! 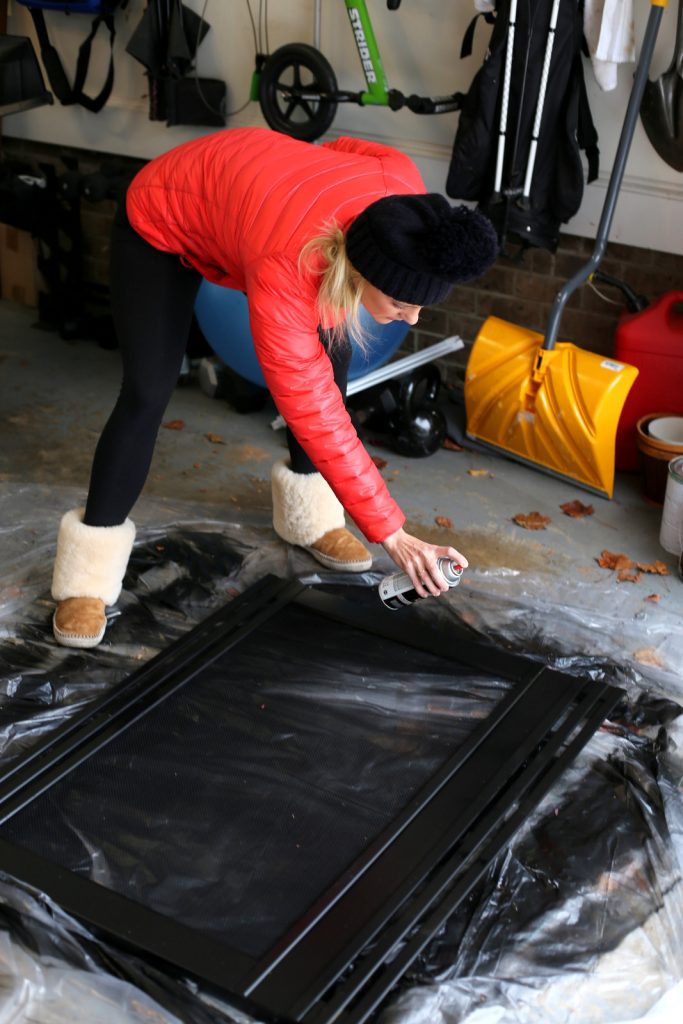 It was part of our living room refresh which is slooowly coming along. I promise to share more pictures once we get furniture in the space but right now it’s pretty bare. If you happen to have a white couch you love that’s easy to clean (<– HUGELY important!), please let me know! We’re looking for one but coming up short and I’m scared to have a white couch that we can’t clean easily with two boys and a dog who thinks she’s a human in our house.

We spent the rest of the morning making chocolate gingerbread cookies (thank you to blog reader Lilly for the recipe recommendation!) and eventually the sleet turned into softer snow flurries so we bundled up and went outside. 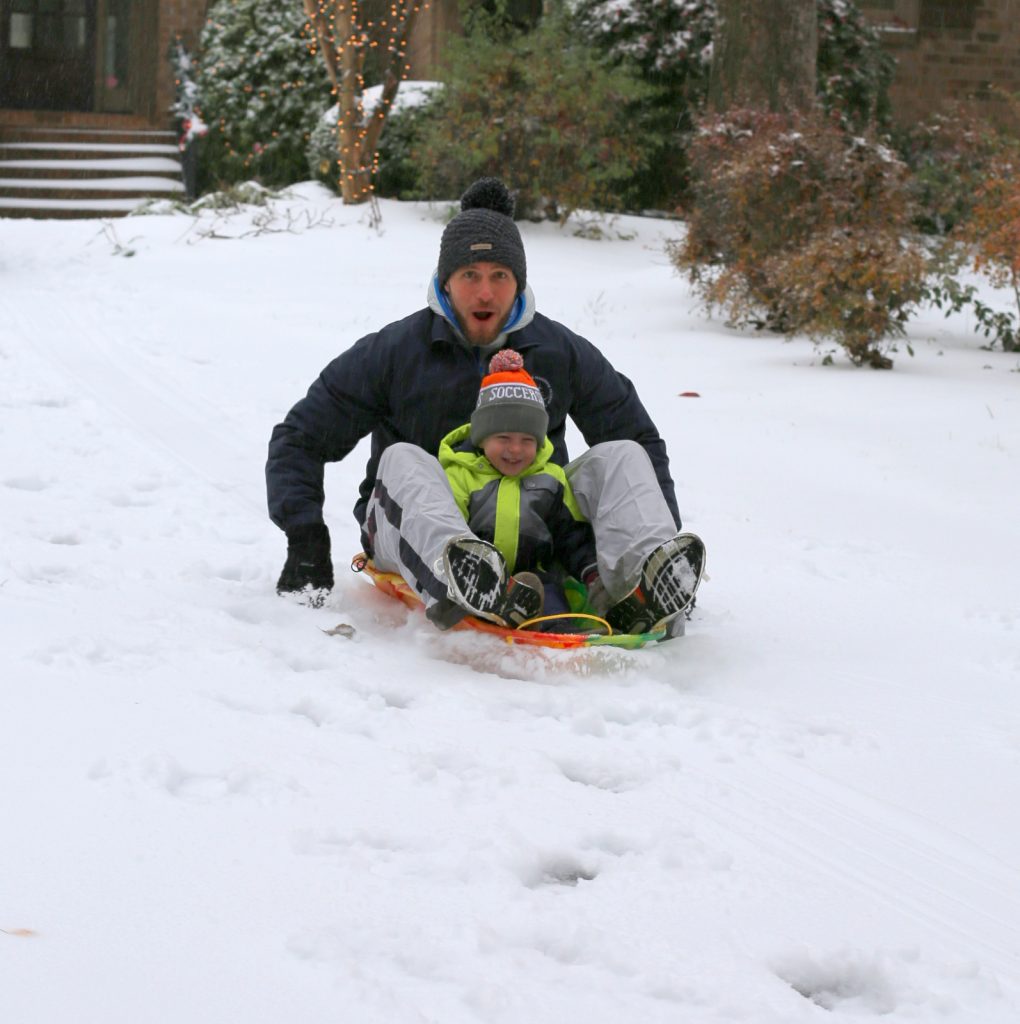 Ryder was napping, so I kept the baby monitor in my pocket and didn’t leave our front yard but Ryan and Chase ended up venturing off to the bigger hills in our neighborhood for some sledding! 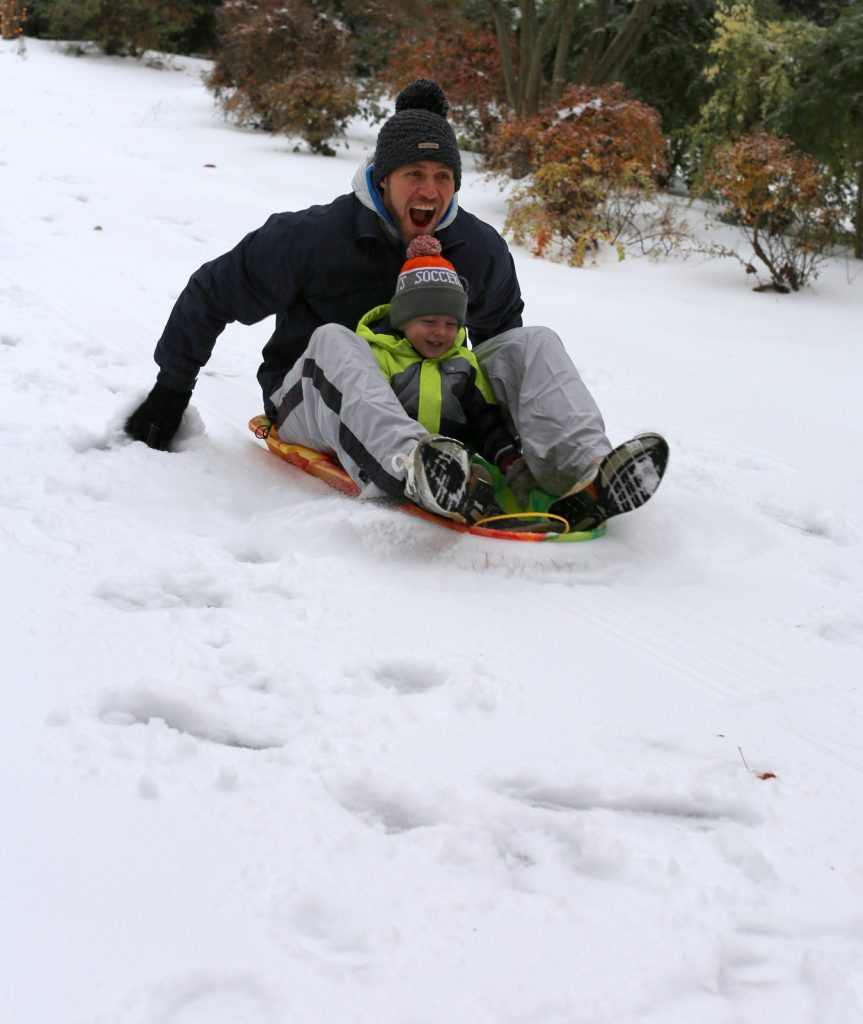 By the time everyone was home, we were all hungry and dug into sandwiches, cookies and hot chocolate!

We spent the next couple of hours indoors but couldn’t resist heading back out into the snow before dinner. Ryder even got in on the action this time and I bundled him up in lots of layers for a short amount of time in the snow. 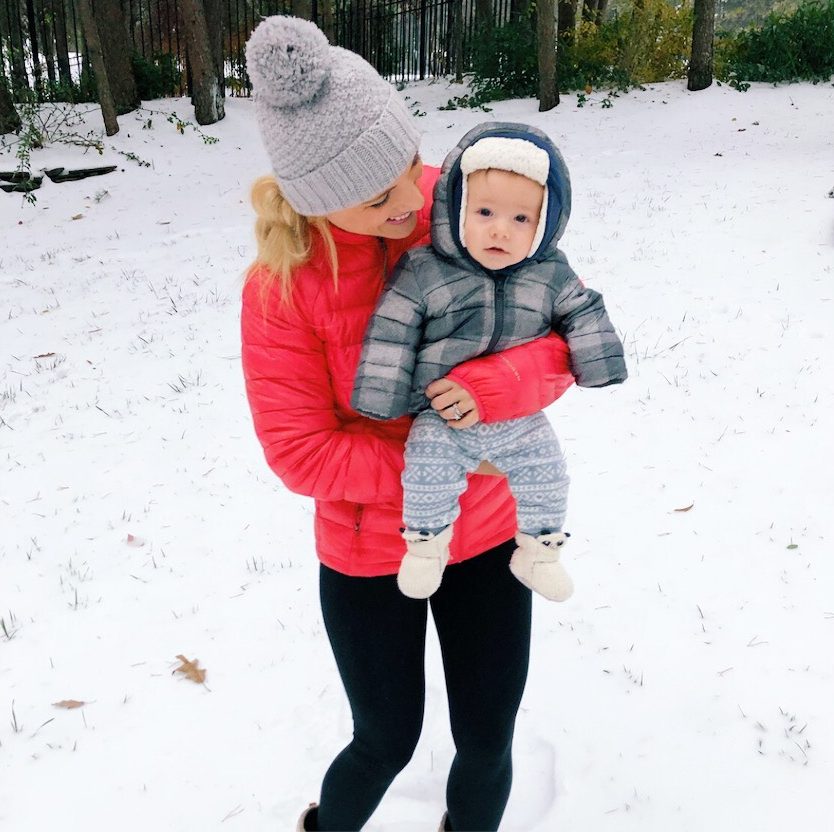 I mean I couldn’t have him just stay inside and miss his very first snow ever, right!? 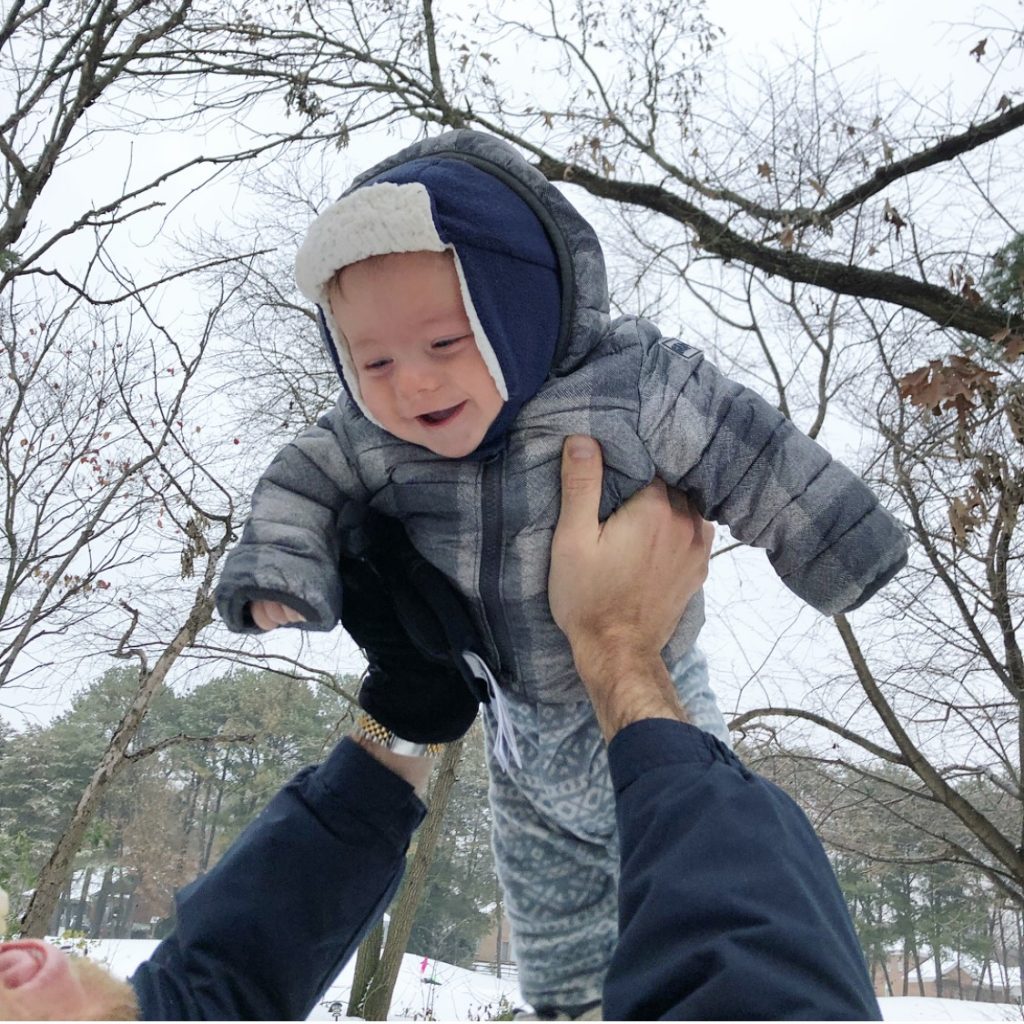 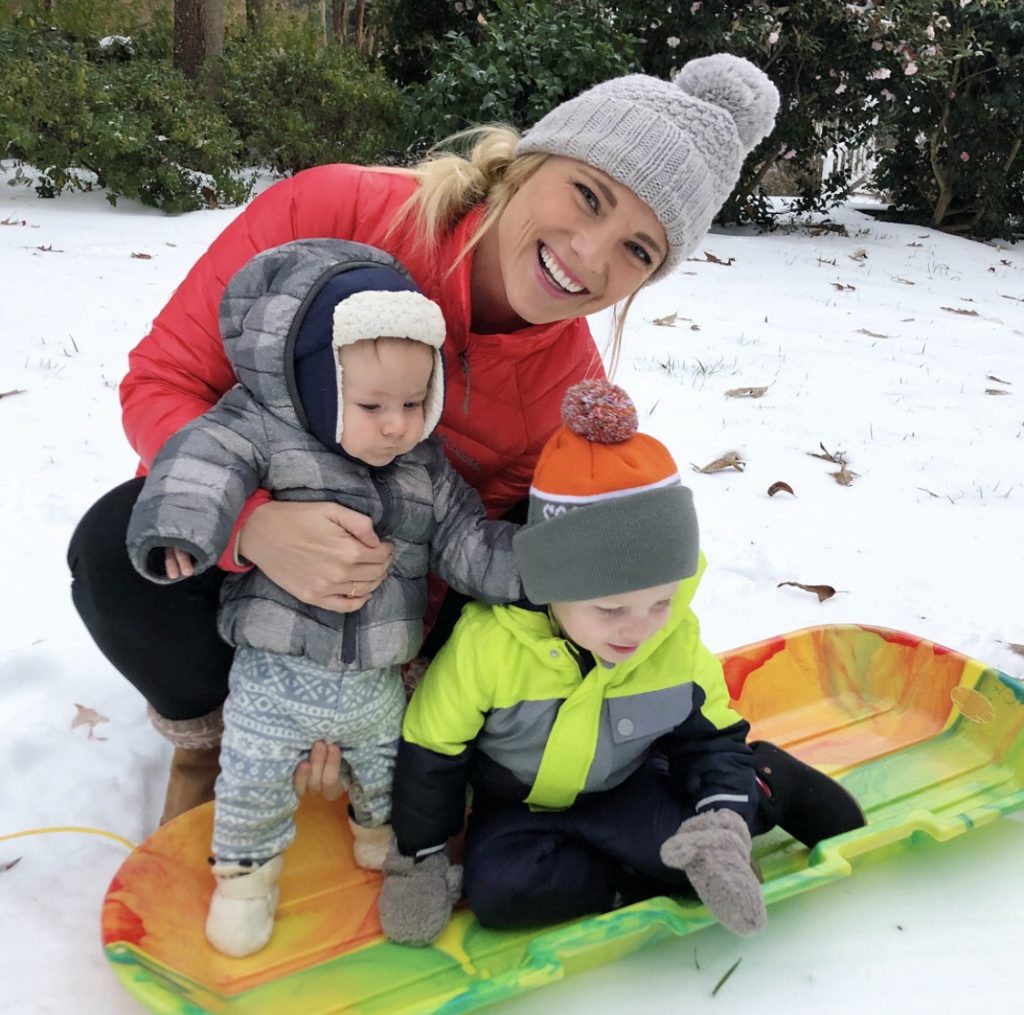 Ya win some, ya lose some.

We rounded out our Sunday evening with a big roast chicken dinner with all the yummy veggie sides and climbed into bed nice and early.

Oh! And aside from the snow one other semi-big thing happened this weekend… We finally transitioned Ryder into the crib in his nursery and started sleep training. The four month sleep regression hit us hard and I’ve been up nursing Ryder in the night 3(ish) times a night for the past two months and am hoping to see some improvement because I am dragging! We’re only the second night in and so far I’d give our experience a B. I’ll report back as we continue to navigate baby sleep madness and hope my next report is a very positive one. Fingers crossed!

Hope you all have a great Monday and stay warm out there!