Navigation
Hey friends! How are ya? I’m checking in this morning after a fun family weekend! We kicked things off on Friday night with homemade strawberry shortcake, a dessert I’m pretty sure I’ve made once a week for the past two months. Now that berry season is here, I don’t see our family’s shortcake obsession ceasing anytime soon.

Ryder usually just eats strawberries and a bit of the shortcake biscuits when I make strawberry shortcake but I passed him his very first beater filled with homemade whipped cream to try and he was ALL IN. 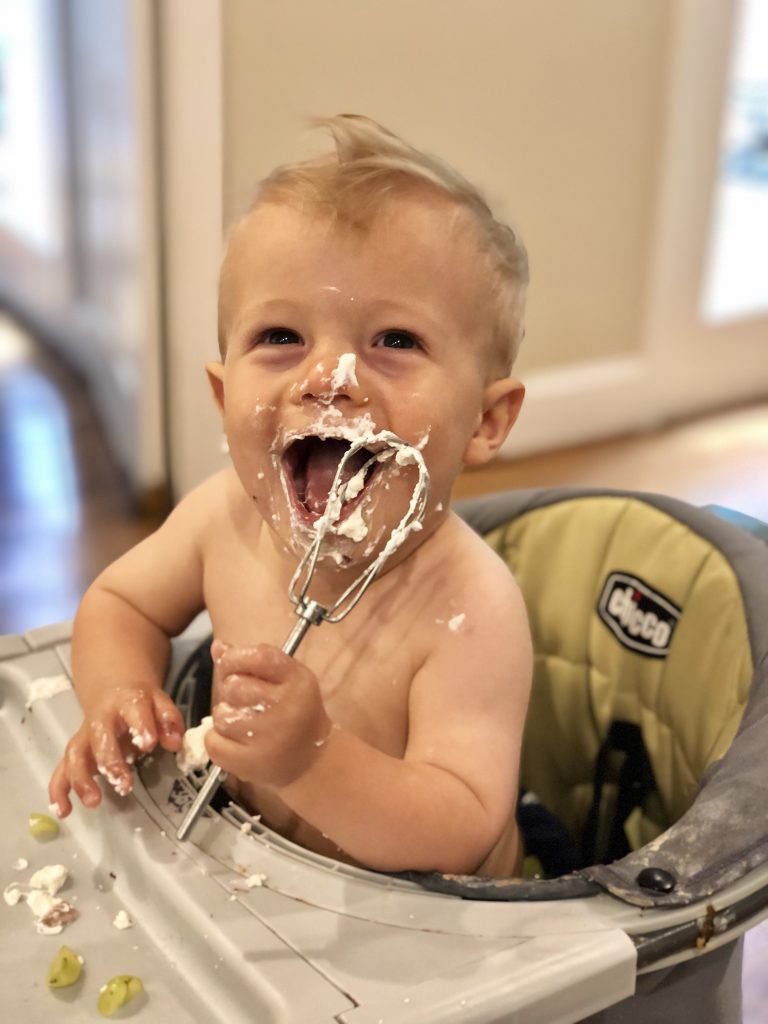 The apple doesn’t fall far from the tree, my friends.

It was absolutely beautiful and slightly cool outside on Saturday morning (well, cool compared to the 90+ degree heat we’ve had over here) and we figured taking Sadie and the boys on a walk to our favorite neighborhood park would be a good way to start the day. 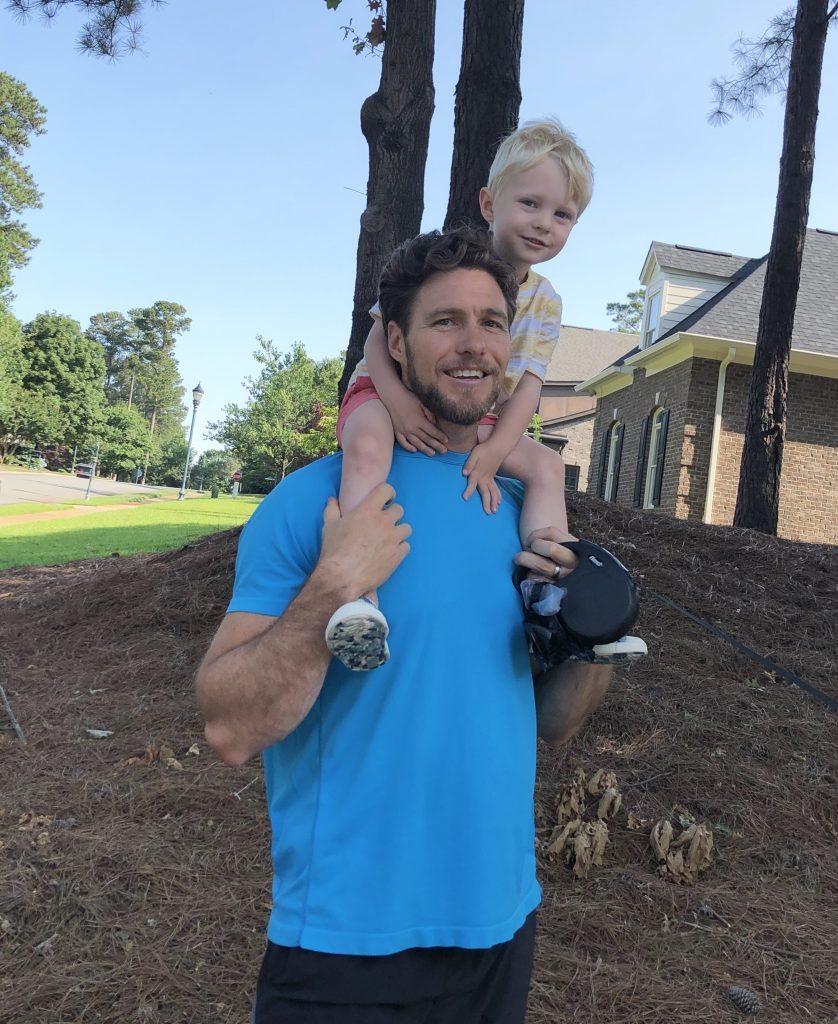 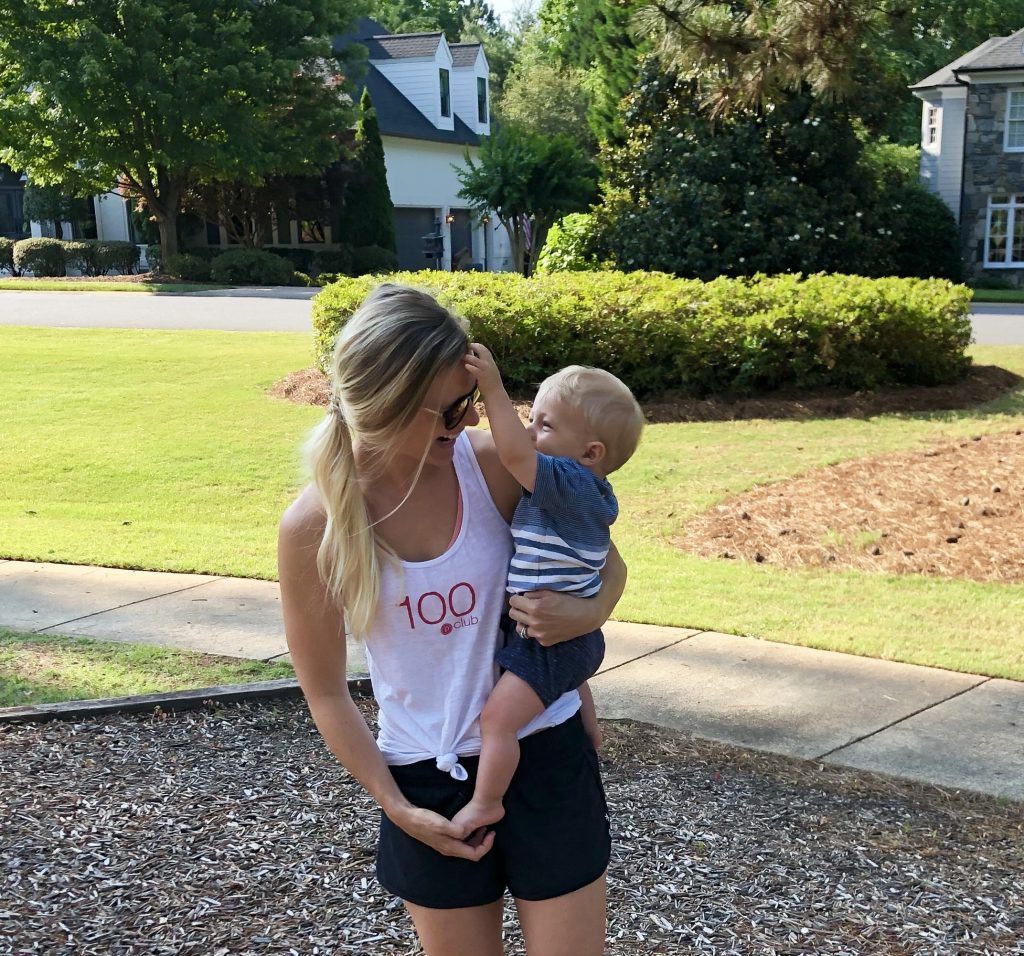 Chase morphed into a flying dragon on the swings and Ryder thought climbing up the tube slide was the coolest! 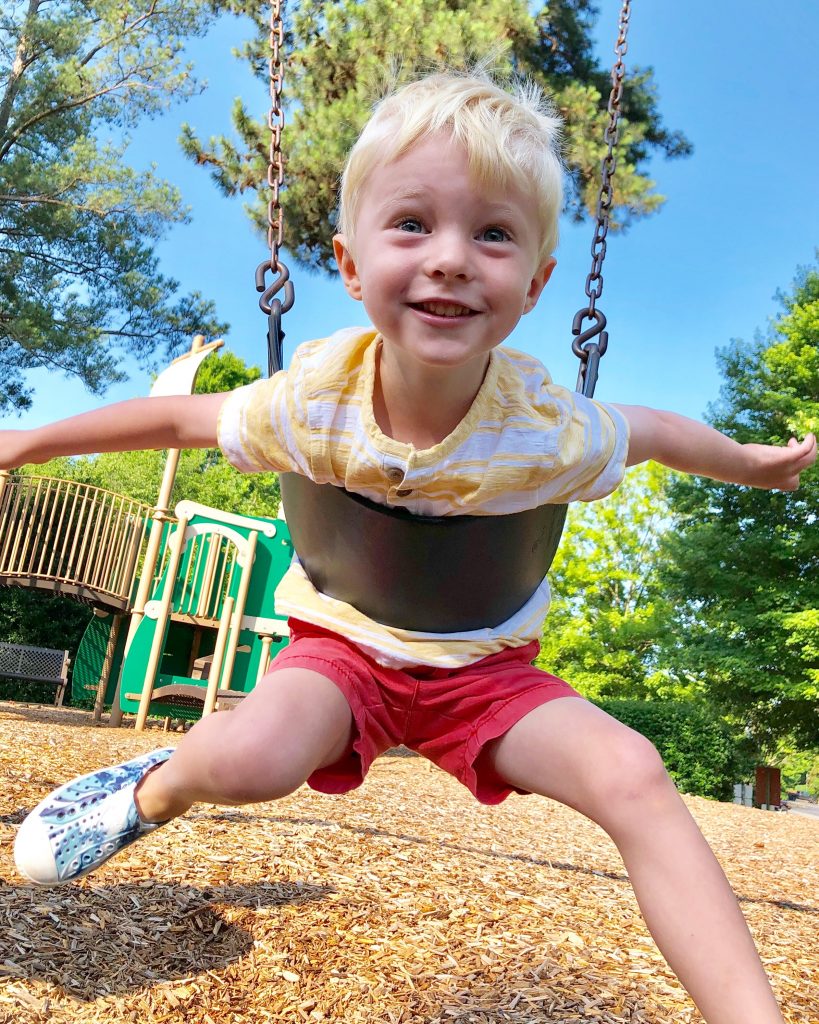 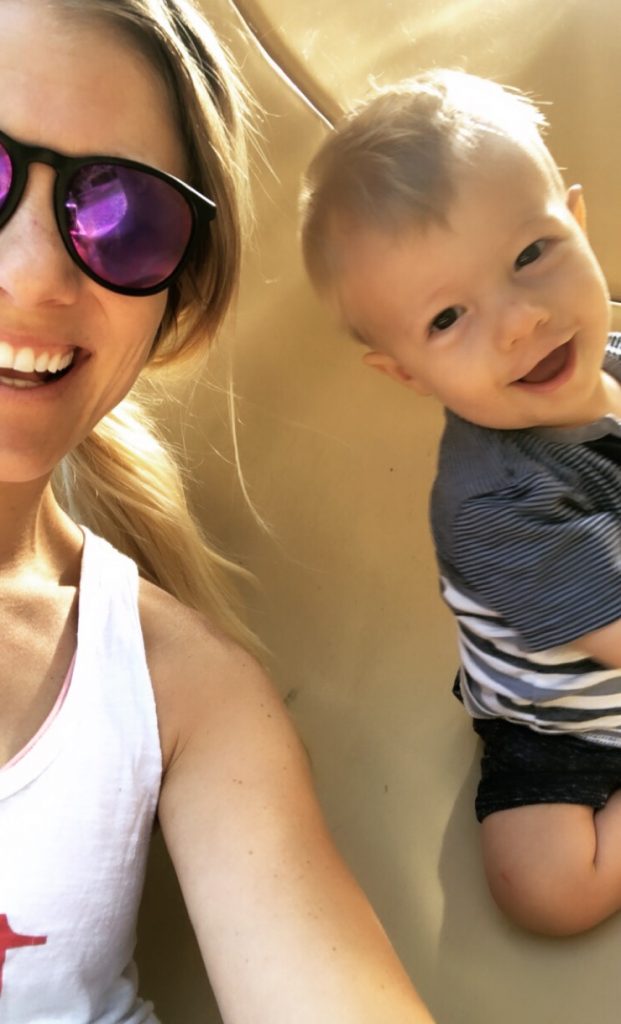 We made our way home in the mid-morning in time for Ryder to take a nap while Ryan and Chase played at home. I was dying to get to HomeGoods for a little solo shopping for some odds and ends we needed for the house and forgot how much I loooove browsing HomeGoods. I rarely go to any stores to wander the aisles and simply browse around these days because I have the boys with me so often but sneaking away for a little alone time in the late morning on Saturday was pretty sweet. I also popped into Lowe’s to pick up more mulch for our backyard and a bag of grout for our kitchen backsplash and made my way home.

I arrived home right when it was time for Chase to go down for his nap so I settled him in his room before playing with Ryder and cleaning out our upstairs hall closet while Ryan did yard work. Eventually Ryder went down for his afternoon nap and Ryan wrapped up mulching and joined me inside for a late lunch. We didn’t have too much time to sit back and relax before the boys were up again. We had plans to make it to the 4 p.m. service at our church so we quickly rallied and headed out!

After church, we drove to downtown Mooresville to wander around the Festival of Food Trucks! 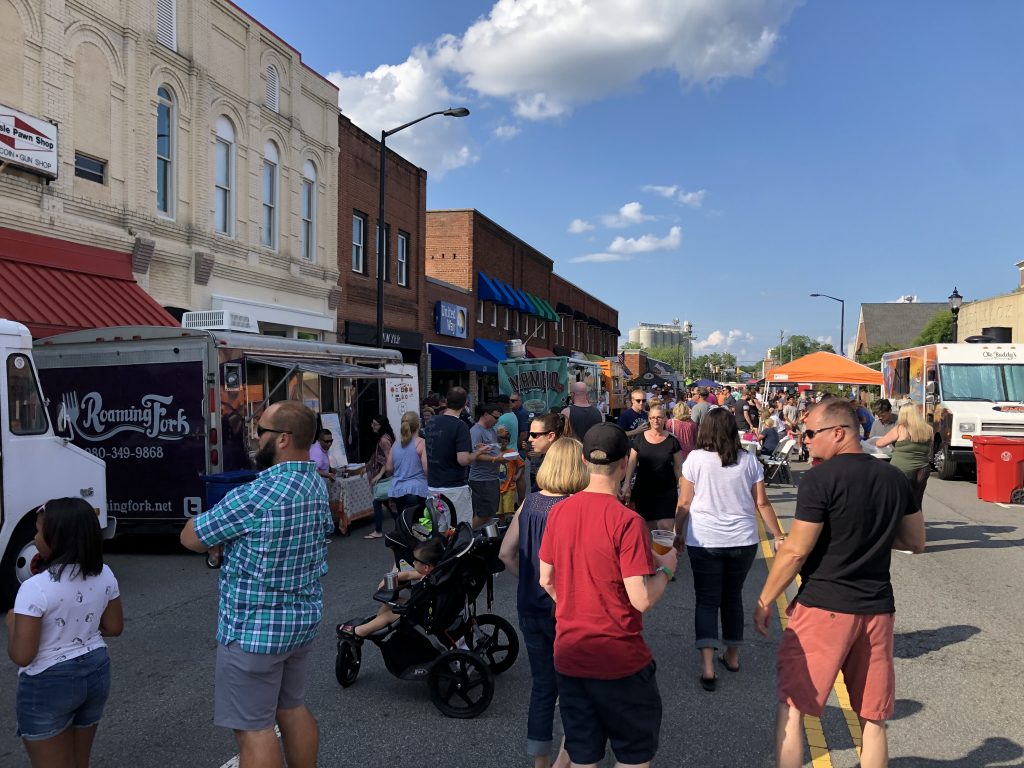 The first Saturday of the month through October, a bunch of food trucks line North Main Street and it’s a great place to go to listen to live music and grab a beer and a delicious dinner. 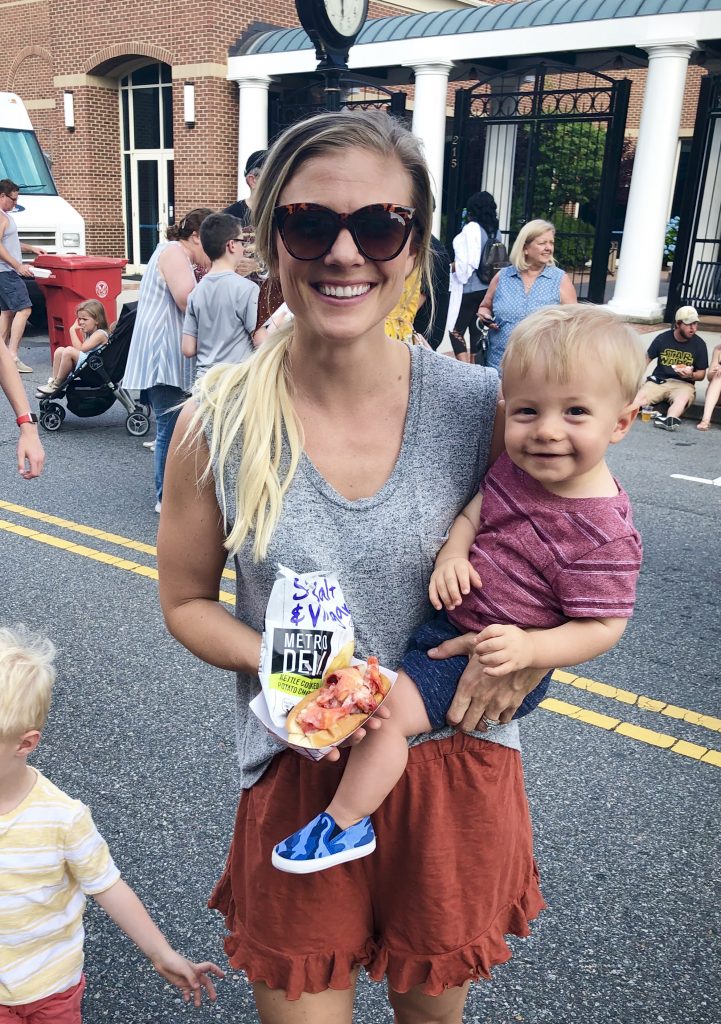 (I had a few questions about these super comfy ruffle shorts on IG Stories when I shared the above pic and they’re from American Eagle and currently on sale. I think they fit true to size but if you’re between sizes, I would size down.)

Chase was all about the live music and shook his little booty with the best of them!

We ordered an assortment of food for our crew — I opted for the lobster roll and it was fabulous — and found a spot on the curb to dig in! 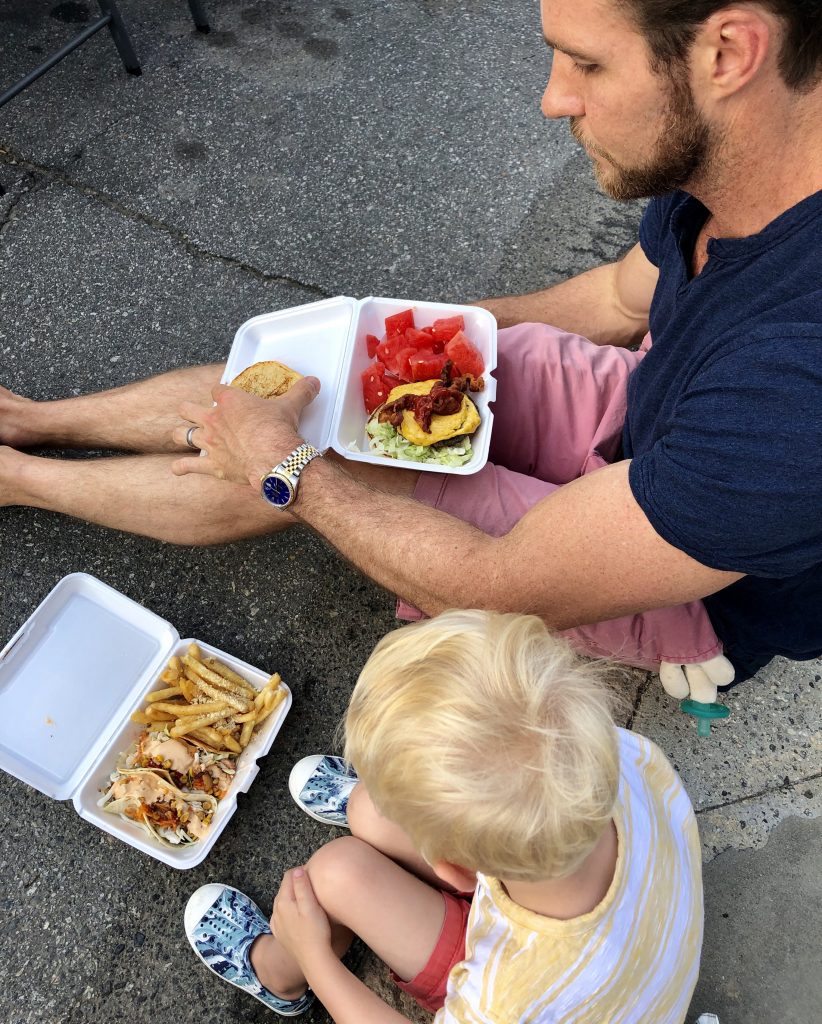 We saw a lot of families pack chairs and set up camp for hours which is something we’ll consider for next time. It was a small festival but a fun one.

Sunday morning began with a siblings class at MyGym! Ever since our beloved Gymboree closed down a while back (I am STILL bummed!), I’ve been on the lookout for a place to bring the boys where they can run, jump, play, sing and dance and just be kids. One of my friends told me about a summer promotion currently happening at our local MyGym where the normal monthly rate gets you unlimited classes rather than just one a week and so I signed both boys up last week. 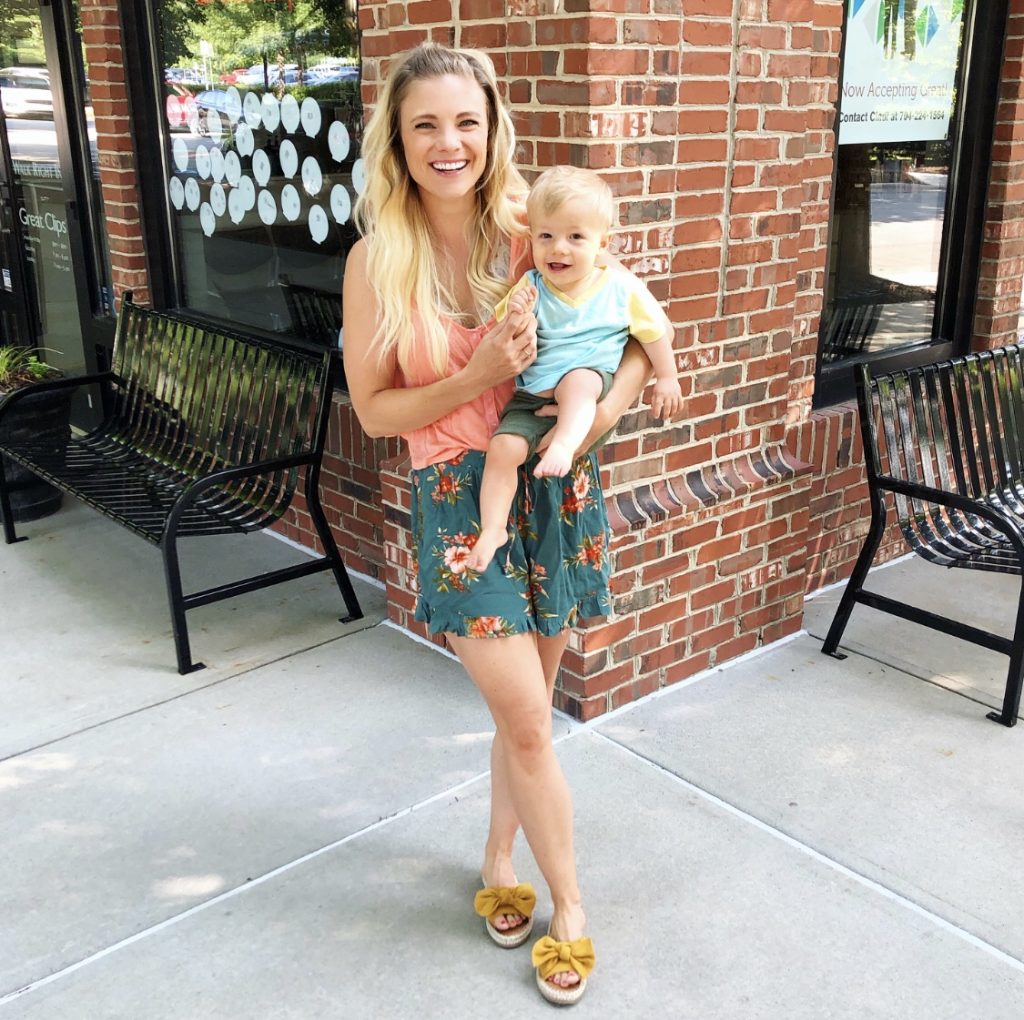 They were in heaven at their first siblings class last week and when I saw they offer a siblings class on Sunday mornings, I knew Ryan would gt a kick out of watching the boys at MyGym so we made a family morning of it! We grabbed doughnuts on our way in and the boys had a blast practicing gymnastics skills… well, Chase did, anyway. Ryder pretty much stuck to chasing balls all over the gym and climbing up ramps but they were both in their element!

After MyGym, we swung by Lowe’s for my THIRD trip there in three days. Anyone else feel like you live at home improvement stores when you’re in the middle of random household updates!? By the time we made it home, Ryder was more than ready for his morning nap and I settled him in his crib before working on my computer for a bit while Chase and Ryan worked on the yard outside.

Once Ryder was up, we wasted no time getting everyone ready for an afternoon on the boat! 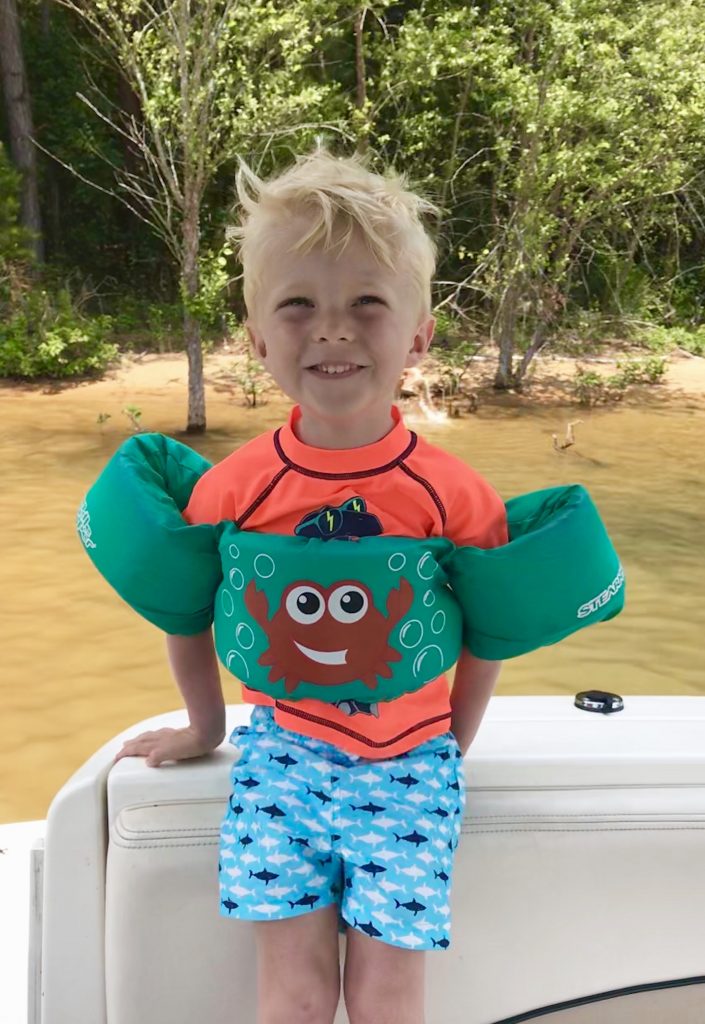 We dropped anchor at a nearby beach where Sadie could play fetch in the water and the boys could splash around. 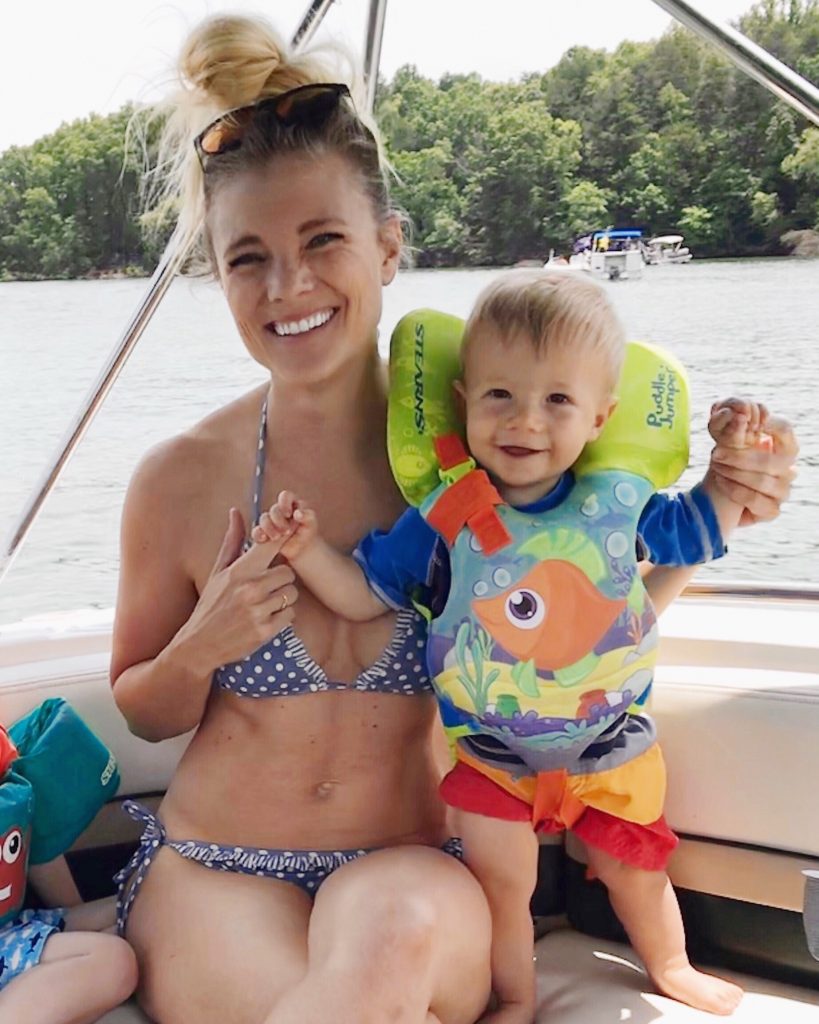 And yes, that would be Ryder SMILING IN A LIFE JACKET, people. It was a small miracle. Though he still screams his head off every time we put his life jacket on, I think he’s beginning to realize life jackets = Boat + Water which are two of his favorite things, so he’s rolling with the punches and even smiling in his life jacket these days. Phew!

We spent the rest of our Sunday evening at home. Ryan grilled burgers for our family while I took care of the sides and we rounded out our weekend with family movie night! One of Ryan’s all-time favorite Disney movies is Hercules, a movie he actually made me watch for the first time when we were dating in college. I loved it right away and still maintain that the music from Hercules is some of the BEST Disney music out there and seriously underrated. I even like working out to some of the songs from Hercules because they’re so darn catchy and upbeat. Just try not to smile when you listen to Zero to Hero. Impossible, I’m tellin’ ya.

Now I’m hearing Ryder making noise on the monitor, so it’s time for me to morph back into mom mode and get this Monday rockin’. Chase has his first week of summer camp so I’m hoping that means I’ll be able to check in here a little more this week! I hope you guys have a fantastic week and, as always, I appreciate you making PBF a part of your day today!