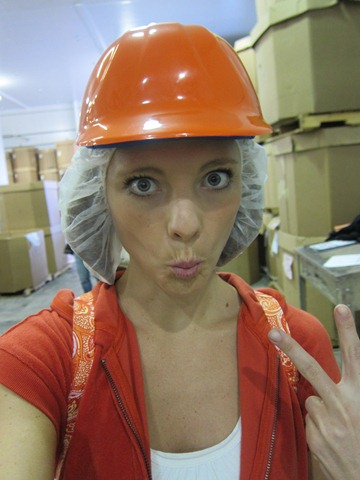 Today kicked off the touring portion of the POM Harvest Tour!

Before heading to the POM factory, I filled my belly with a tasty breakfast from the buffet. 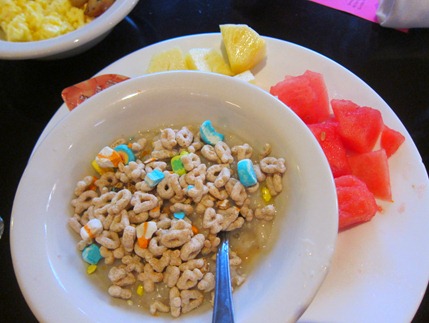 Yes, that would be oatmeal topped with Lucky Charms. That’s how I roll. 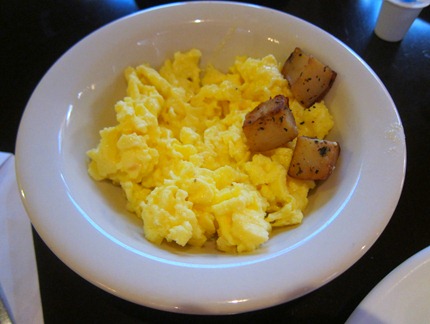 What is it about buffet-style scrambled eggs that are so good? They are always so fluffy and full. 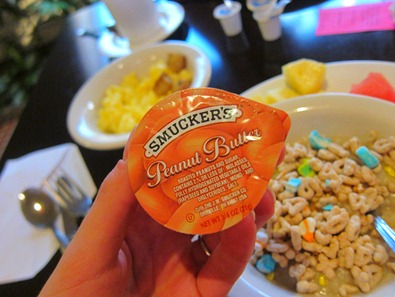 I’m not gonna lie, I ate that peanut butter straight out of the container with my finger… not that you’d expect any less from me.

A Touring We Will Go…

Once we were all sufficiently stuffed, we piled into two vans and headed toward the POM factory where we hung out for a bit, enjoying yummy snacks, including Wonderful Pistachios, POM tea and pomegranate arils. 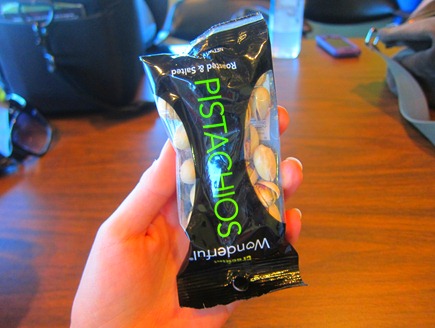 I ate two packs of the nuts and three bowls of the pomegranate arils (seeds) over the course of the day. Guys, that’s like 6 cups of arils. They’re seriously delicious and seriously addicting. 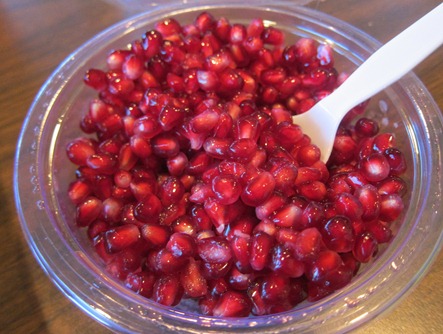 Man, I was missing out! They are flippin’ phenomenal. (Clearly I think so. I mean I ate 6 cups.)

Once snack time was over, we embarked on a tour of the factory.

Our first stop took us to the area where the plastic bottles are formed. 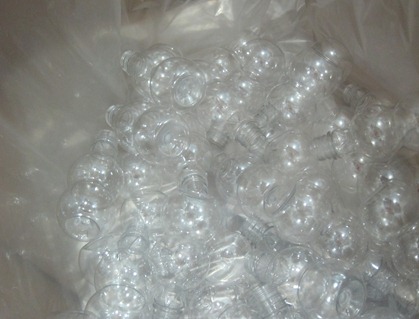 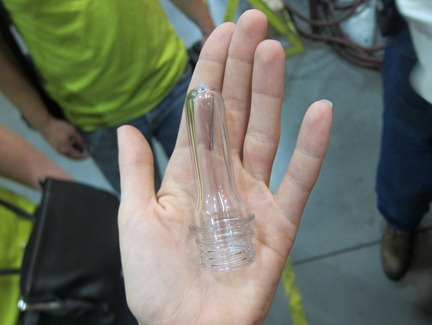 To this curvaceous little gem. 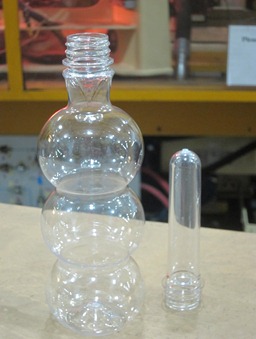 The POM bottles are modeled the way they are with the curves to mimic the shape of actual pomegranates, an idea conceptualized by the founder. She’s a creative one, huh?

The tour then led us into the filling room which we were not allowed to photograph for proprietary reasons. It was really neat to see how the bottles are sterilized and filled.

Each day the factory fills a different POM product. Today they were filling a peach tea that smelled fantastic. 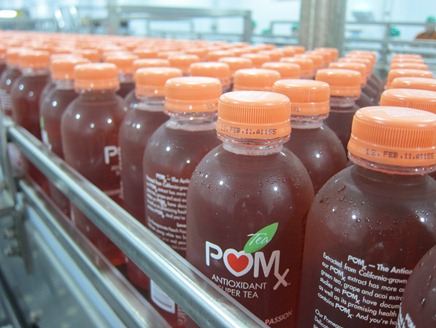 Several of the other bloggers and I commented that POM Wonderful should sell a bodywash or perfume or something because the scent in the factory was so wonderful. (<—Like my pun? Pom Wonderful… 😉 I’m a goober and I love puns. 10 points to anyone who leaves a pun in the comments section of this post! )

I thought it was really cool to learn that the whole process from shaping the bottle to filling it with the juice only takes about 15 minutes. These people are speed demons.

No Fruit Left Behind

As we were walking outside to explore another part of the factory, we saw remains of the pomegranate fruits being loaded into trucks. The peels and leftover fruit will then be used to feed cattle! 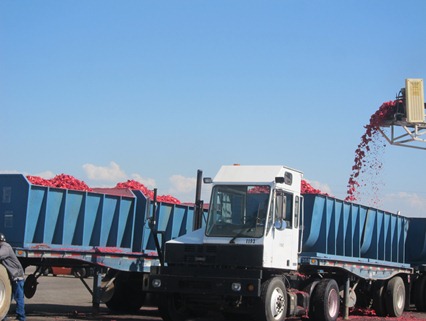 I grew up in a “no food wasted” family, so I appreciated the fact that POM uses every last bit of their fruit. I bet my dad would, too. 😉 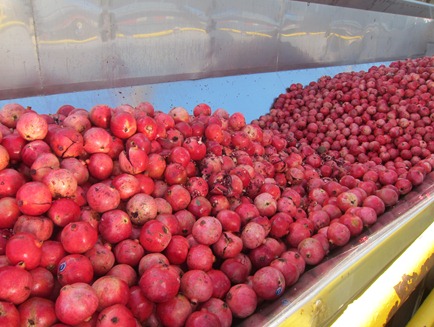 Our group then took a quick breather before heading out for the last portion of the tour.

We learned a lot about whole pomegranates and the process involved in determining which pomegranates will make it onto supermarket shelves.

One thing I found particularly interesting was that you really cannot judge a pomegranate on its color alone. A light pink, faded looking pomegranate (like the one pictured below) will typically yield arils that are just as delicious as those from a gorgeous, ruby red pomegranate. 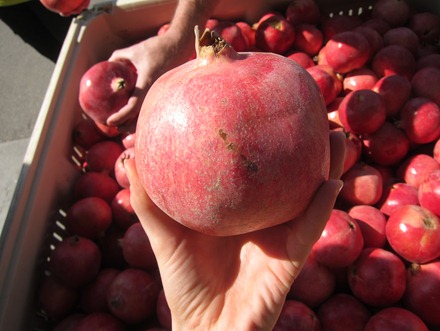 I guess pomegranates are like people… they can’t be judged on the outside alone. It’s what’s on the inside that counts. 😀

The inside of the final factory we toured was really impressive. Each pomegranate is photographed nearly 25 times to check for coloration, scarring and other factors before determining if it’s suitable for sale as a whole fruit, or should be made into juice. 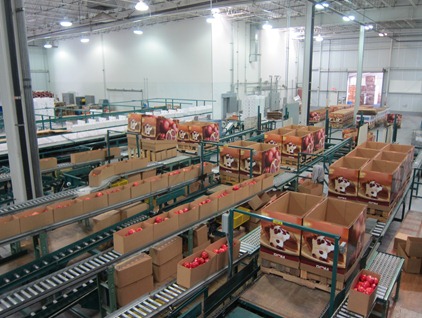 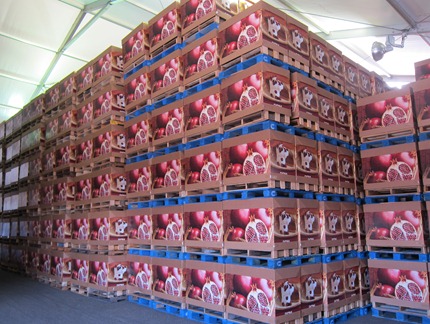 Once our tour of the factory concluded, we were shown how to cut into a pomegranate and scoop out the tasty arils. 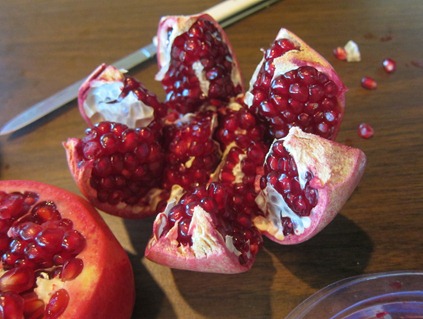 I want to try it for myself! I may even post a tutorial on the ol’ blog because the whole concept was pretty foreign to me and I’m assuming one of you out there might want to learn how to enjoy the fruits of your labor. (Again with the puns… :D)

Once the tour was officially over, we headed back to our hotel for a delicious late lunch. I really wasn’t that hungry (I blame the fibrous arils and two pistachio packages), but I still managed to down a whole marinated veggie sandwich. 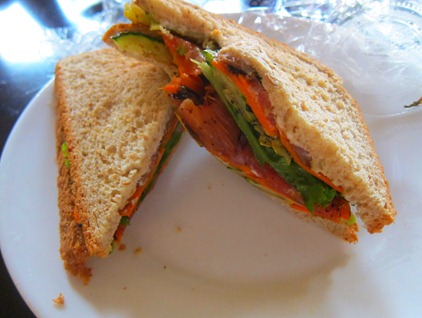 We’re heading to dinner in an hour and I am seriously stuffed. I hope I can pack in more food though because the menu for this evening sounds ah-maze-ing!

Hope you’re all enjoying your FRIDAY night! 😀 See ya in a bit.

« East Coast Time
How to Curl Your Hair with a Straightener: Video »