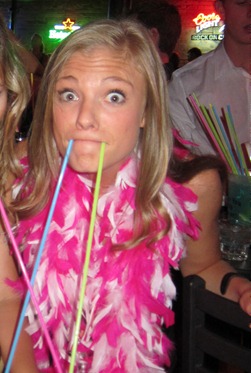 (Picture from my first bachelorette party.

Yes, Ryan and I fermented in our sweat from our respective morning workouts nearly all day. We’re gross, but at least we’re both gross.

After this morning’s blogger boot camp, Ryan and I took a short detour to the outlet mall before heading home because I wanted to pick up some tights since every single pair I own has a hole in them. (I blame Sadie and my wedding ring. Both seem to snag tights like it’s cool.)

Please notice that I say I needed tights. After work yesterday, Ryan and I were taking Sadie for a walk when he asked me if there was anything I wanted to do this weekend. I told him I wanted to pick up some tights because all of mine are holey.

He looked down at the pair of leggings I was wearing and said, “What about those? Those don’t have holes.”

“These are leggings,” I replied.

“Tights cover your feet and are thinner than leggings.”

“Okay, so what’s the difference between tights and pantyhose?”

“Well, for starters, no one under the age of 85 says the word pantyhose,” I said.

“Got it. So you want pantyhose.”

I couldn’t help but laugh because all last night and this morning, Ryan cracked himself up by referring to my quest for tights as my mission for “hose.”

(For the record, I do realize that there actually is a difference between pantyhose and tights. Some of you Kappa Deltas out there may recall having to wear legit hose back in the day… Gross.)

Fortunately I did nab two pairs of tights (black and brown) at the Banana Republic outlet. 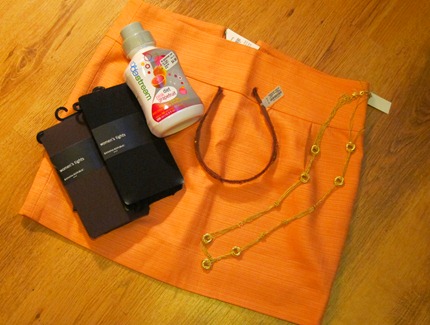 I also picked up a pink skirt and headband from the J.Crew outlet, a gold necklace from Banana and a bottle of pink grapefruit mix for the Soda Stream Ryan and I received as a wedding present. We are anxious to try it out!

A trip to the outlet mall is never complete without a stop at le gourmet chef for free samples! 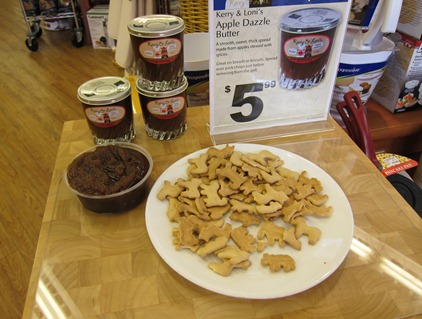 I ate a million.

One we arrived home, I was hungry for lunch.

I first ate a bowl of yogurt cereal made with a cup of banana honey Chobani Champions children’s yogurt that received from the company to try. (Adults love it, too!) 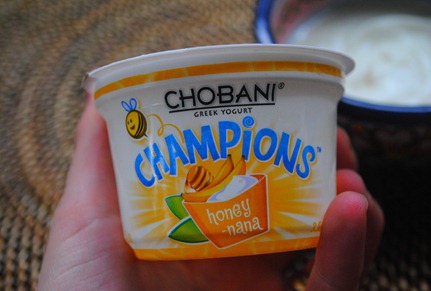 I paired the yogurt with strawberry cereal puffs and loved every bite. The banana honey flavor of the yogurt was absolutely delicious. I typically dislike anything banana-flavored, but I really enjoyed this yogurt. 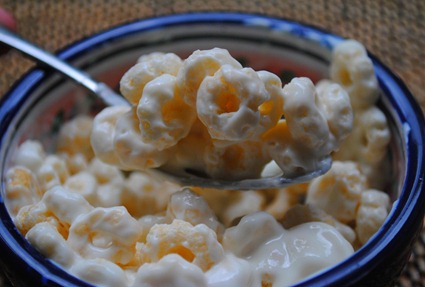 About 30 minutes later, I prepared a smoothie for lunch made with: 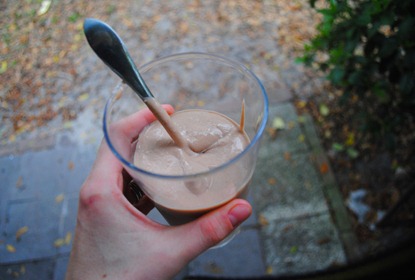 It was so thick that I ate it with a spoon.

Ryan and I spent the majority of the afternoon reading Mockingjay, the third book in The Hunger Games series. We have about 40 pages left and it has been such an entertaining read. Total page turner!

After reading numerous chapters and taking Sadie on a short walk, we headed to Moe’s for dinner. 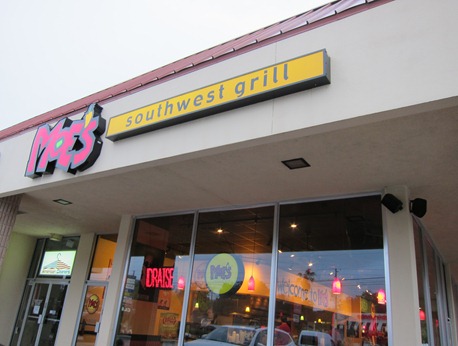 I ordered a chicken quesadilla prepared with salsa. 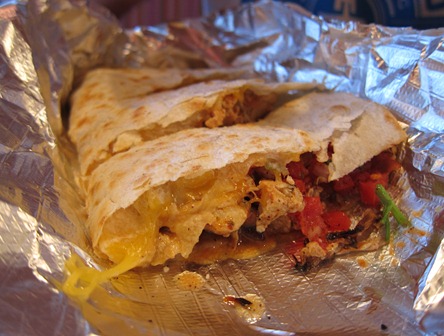 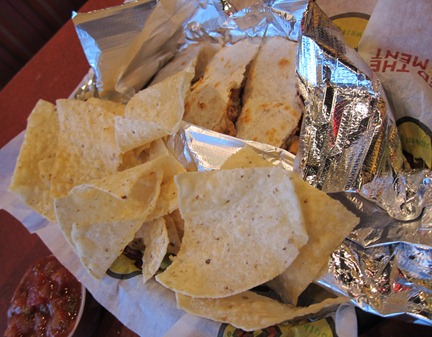 Moe’s doesn’t take it easy on the cheese which I appreciate.

Even though I was pretty full, there’s always room for frozen yogurt! 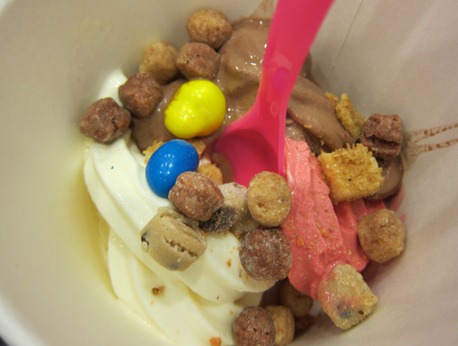 Ryan filled his cup with vanilla and red velvet fro yo while I opted for a combination of red velvet, cheesecake and dark chocolate frozen yogurt, topped with cookie dough, cheesecake pieces, Reese’s cereal and peanut M&Ms.

When we got home, Ryan got a call from some of the members of his men’s league soccer team. The guys were meeting up for a team dinner and since Ryan apparently has eight stomachs, he headed out to meet the team for meal number two. 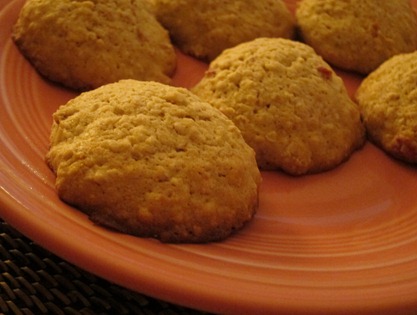 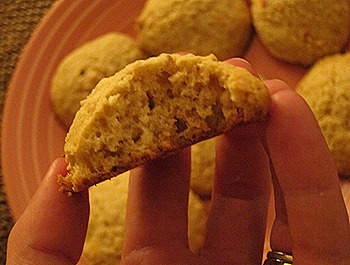 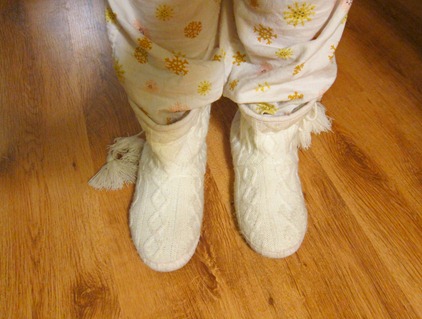 I am officially the coolest person in the world. I’ve even managed to bore Sadie… 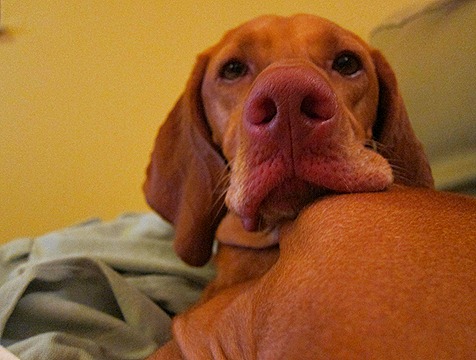 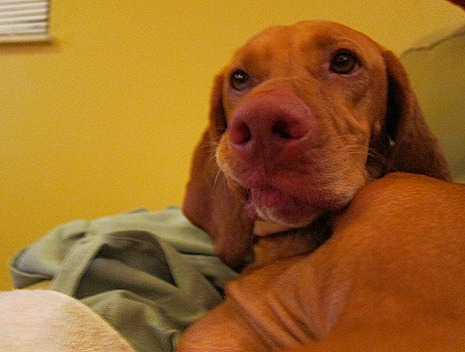 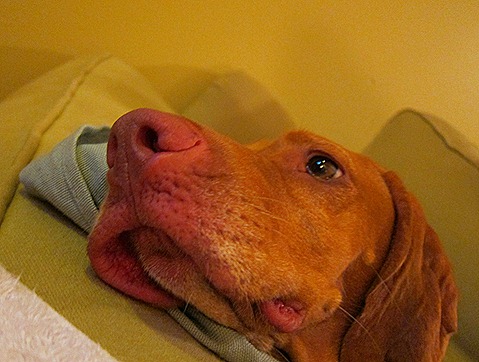 Even though Sadie may think I’m super lame tonight, I’m actually quite content to spend the evening on the couch watching girly television. I’ve felt a little out of whack the entire week and feel like I could use a night of pure laziness. Plus Ryan should be home soon and I’m looking forward to finishing Mockingjay tonight!

Hope your Saturday night is perfect, whether you’re partyin’ it up or being lazy like me.