Before the sun peeked over the horizon this morning, Sadie and I were driving through the Ocala National Forest on our way to the North Florida Race for the Cure. My sister created a team through her work and I signed up to participate a month or so ago.

The Race for the Cure is always an emotional and inspirational race for me. Whenever I run the race, I am transported back to the year my mom was diagnosed with breast cancer and I ran the race with my sister. I remember looking around the sea of pink and seeing survivors. Women and men wearing deep pink t-shirts with the word SURVIVOR on them gave me hope that my mom would wear the same shirt the following year. 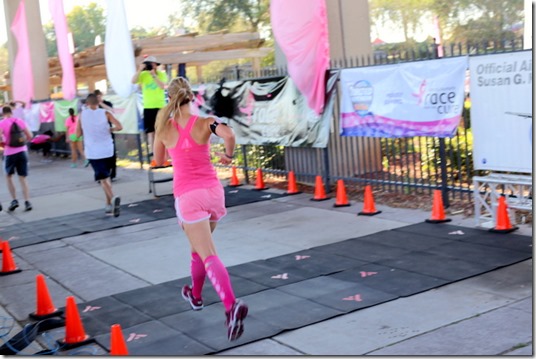 Five years after my mom’s double mastectomy, I am still emotional when I walk toward the starting line of a Race for the Cure event and witness, first hand, just how many people are affected by breast cancer. It touches so many lives and I am so incredibly grateful for my mother’s health. 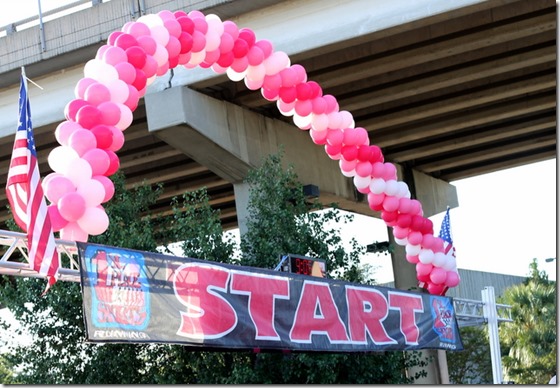 Unfortunately my mom could not be at today’s race because she is still attending to my grandmother and will not return from Pennsylvania until early next week, but my family and I participated in the race in my mom’s honor. (Ryan left on a business training trip today and couldn’t make it either.)

The race began at 9 a.m. which was both great and not-so-great. I appreciated the late start time since it meant I could hang out with Ryan in Ocala last night and still drive to Jacksonville this morning without waking up at a ridiculously early time, but the late start also meant that the race was H-O-T! The course was almost entirely in the sun and temperatures were in the 80s, so I finished red faced and super sweaty! It didn’t feel like my strongest run, but I still had fun! 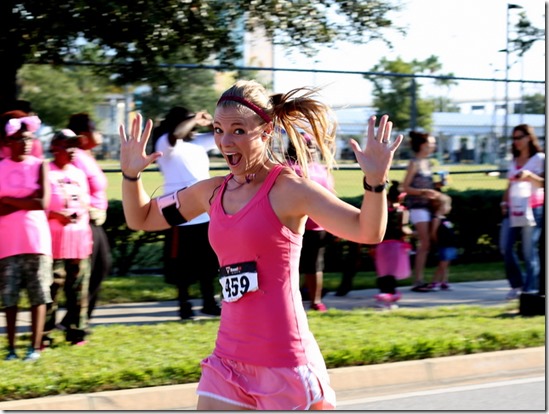 My sister is nursing an injury and could not run, so she and her fiancé, Ross, offered to watch Sadie and her fiancé’s chocolate lab, Kona, so they could come along and enjoy the energetic race day atmosphere. 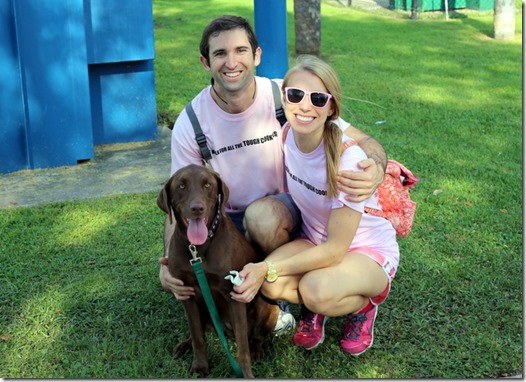 The dogs loved it! I actually saw quite a few people running with their dogs which made me wish I would’ve brought Sadie along to run with me, but I think running with your dog might be discouraged by race organizers, so perhaps it was for the best. I know she would’ve loved it!

As I was running, I knew to look for Leslie, Ross and the dogs around mile 1.5, and when I saw them, Sadie went berserk and started barking and jumping around which I interpreted as her version of cheering. Ross snapped a picture of Sadie watching me run into the distance after I passed them which I thought was adorable. 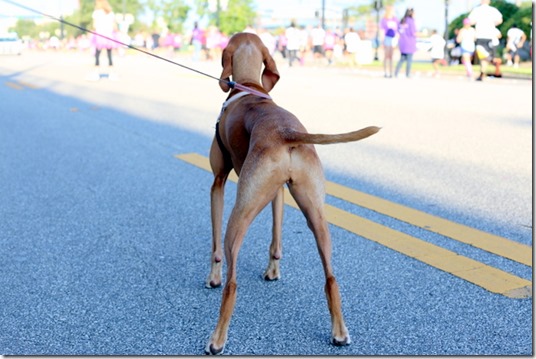 You can tell she just wants to run!

Unfortunately my Garmin ran out of battery within the first two minutes of my run, so I couldn’t check out my pace while I ran, but I ended up crossing the finish line in 28:11 (9:04 minute mile). Considering the heat and lack of shade on the course, I’ll take it!

Once I was done running, I took off my chip timer and backtracked to find my dad who was walking the race due to an injury. (He ruptured his bicep tendon and had surgery on his rotator cuff a month and a half ago.) 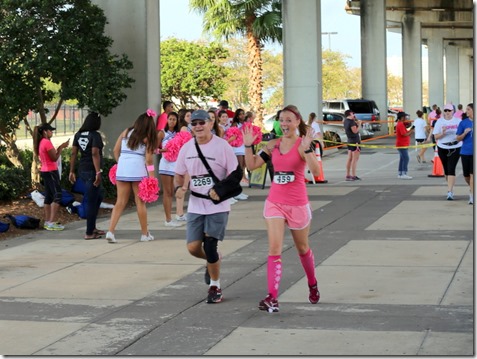 We crossed the finish line together and I could see tears in my dad’s eyes as he told me that he felt emotional just thinking about my mom as he finished the race. I wish she could’ve been there, but we sent lots of love and picture texts her way!

With the race complete, we met back up with Leslie, Ross and the dogs and made our way to the post-race party. 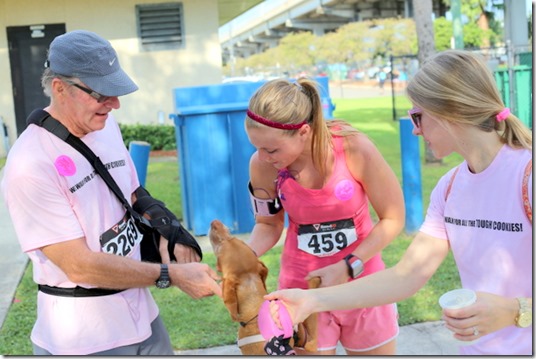 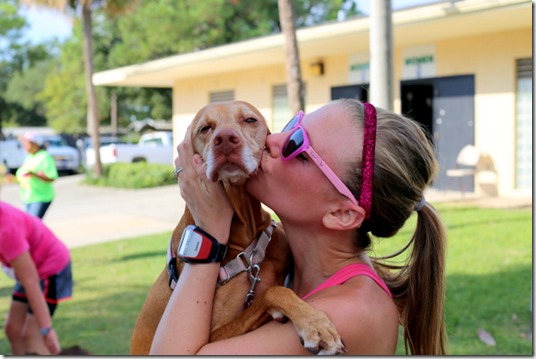 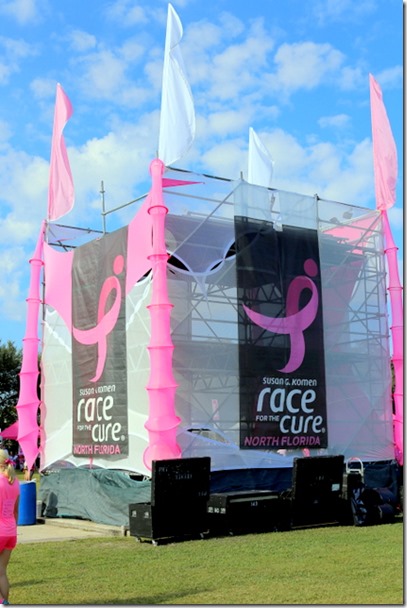 The post race party had food and gear for sale and samples of smoothies and popsicles for participants to enjoy. We grabbed water and I had a lemonade popsicle that tasted fantastic after such a hot run. 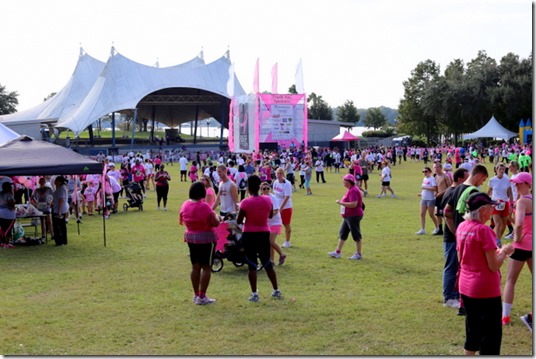 It was a wonderful race day and I’m sending lots and lots of love to everyone out there who has been touched by any form of cancer in some way. Big hugs to all of you!

And now I will sign off with this picture that I think perfectly sums up my relationship with Sadie. 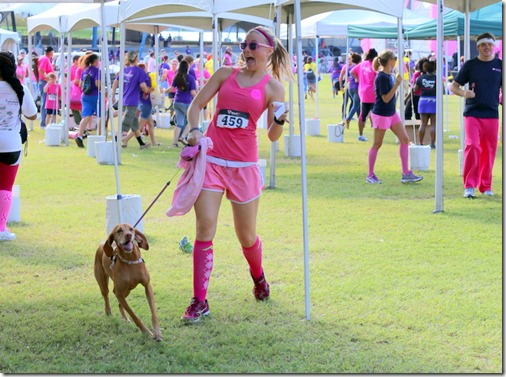 I love that crazy little rascal.

Have a great Saturday, my friends!