Navigation
The seafood lover in me was one happy camper last night!

Ryan and I had dinner plans at Latitude 31, a restaurant located on the pier in Jekyll Island. 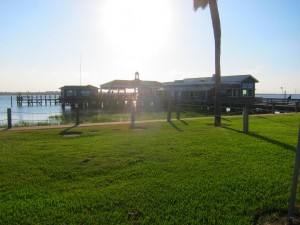 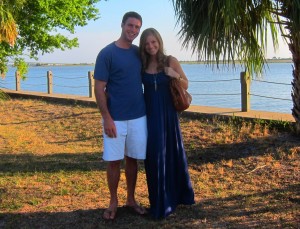 The restaurant was just as beautiful inside as it was outside. 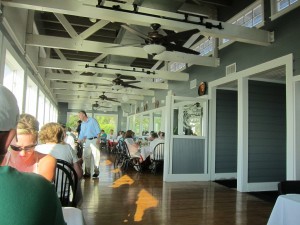 Check out the view from my seat at our table! 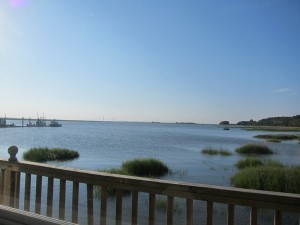 Once we started perusing the menu, a bunch of different things popped out at us. The moment I saw the blue crab and brie quesadilla appetizer, I mentioned it to Ryan and he agreed that it sounded fantastic. 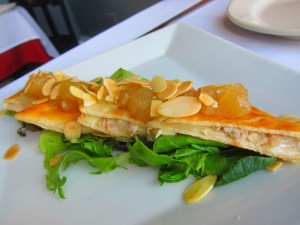 The crabmeat was plentiful and the brie was warm and oozing. A great selection!  I forgot to snap a picture of the bread basket at our table, but I had two rolls that were warm and slightly sweet and really good. They looked like generic rolls when they were placed in front of us, but they were absolutely delicious!

I arrived at the restaurant hoping for steamed shellfish for dinner and stayed true to my wishes by selection an order of a dozen oysters as my entrée. 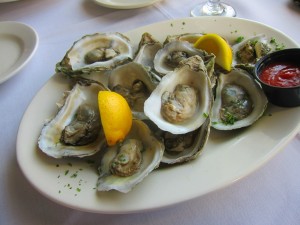 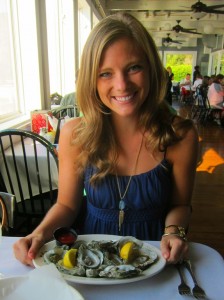 My oysters were good, but Ryan’s dinner stole the show. 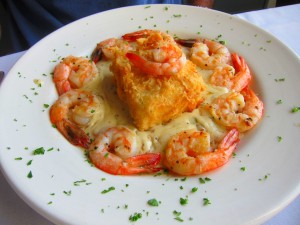 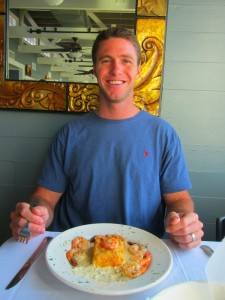 He ordered the shrimp ‘n’ grits and oooooh myyyy gooooosh. It was so creamy, flavorful and perfectly southern. If we visit Jekyll Island again, I am definitely ordering this dish. The fried block in the middle of the plate was actually the grits, and you had to break into it with your fork and mix it around in the creamy sauce. Unbelievable. I’m seriously salivating just thinking about it.

Before leaving, we asked out waiter for dessert recommendations and he suggested the xango cheesecake, a caramel banana cheesecake, fried, dusted in cinnamon and sugar and served with whipped cream. 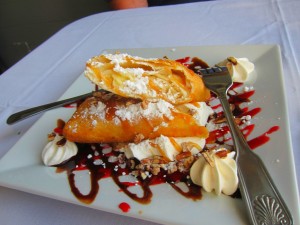 We had about an hour and a half to kill before we needed to be at back at the Georgia Sea Turtle Center for our nighttime turtle walk, so we ventured out around the island, stopping by the fishing pier to watch the sunset. Since we both have a fifth stomach when it comes to dessert, we also swung by Dairy Queen for a Hawaiian Blizzard to share. 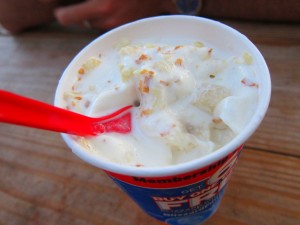 Then it was time for our turtle walk! 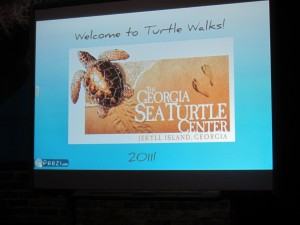 Unfortunately we didn’t see any sea turtles nesting on the beach, but we did see a ghost crab and a sea turtle nest. It was nice to simply walk on the beach at night. Most of the hotels on Jekyll Island were built a distance off the beach, so it was very dark and peaceful out by the water.

Once our walk was over, we came back to the hotel and crashed hard! It was a long but really fun day.

Today will also be full of adventure. We’re about to grab breakfast before heading out for a guided kayak tour. I hope Ryan and I get a double kayak, so I can let him do all the rowing impress him with my rowing skills.