Navigation
Hey friends! How was your weekend? We weren’t able to see my mom or mother-in-law on Mother’s Day yesterday but we made sure to send them some goodies ahead of time and had the chance to FaceTime, text and talk with my mom and Diane which was the next best thing. I keep telling myself that our eventual reunion will just be all the more sweet!

As for how our crew spent Mother’s Day, we went on quite an adventure! The morning kicked off with an uninterrupted workout for me which was awesome since my body was craving some strength training after a bunch of days off last week. It felt good to move and sweat and by the time I was done with my workout and shower, Chase came into my room beaming to tell me he and Ryan had breakfast and coffee waiting for me downstairs. (Ryder slept in on Mother’s Day which was a gift in and of itself!) 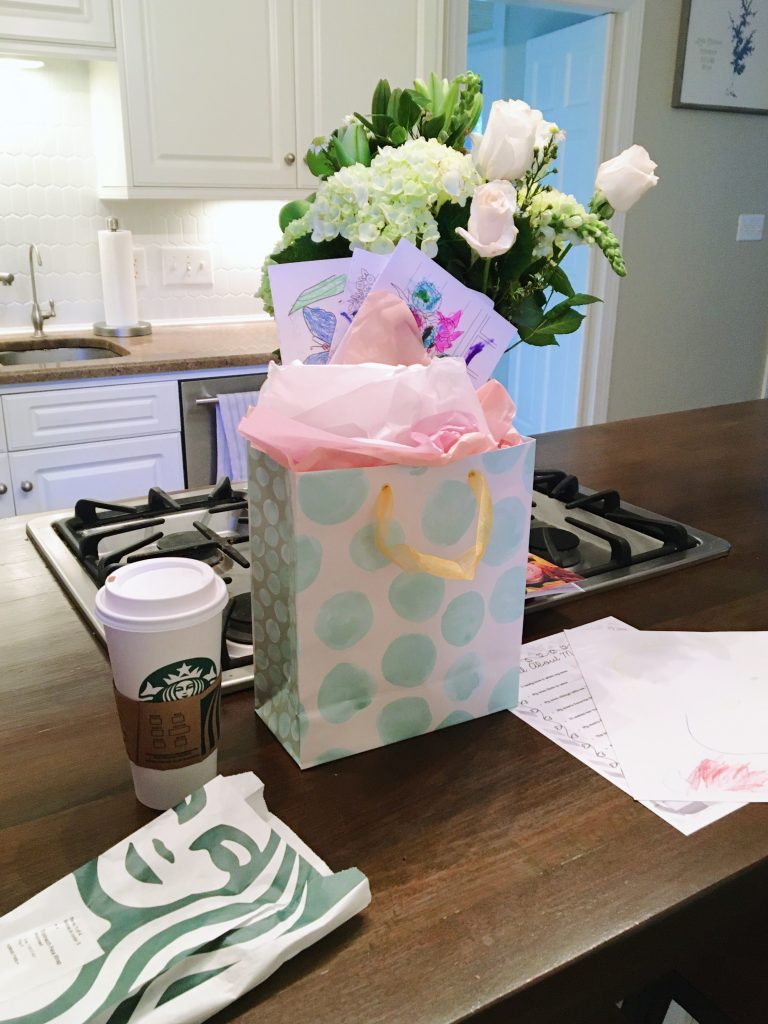 It’s been months since I’ve had a whole milk cinnamon dolce cappuccino (1/2 decaf) or my favorite breakfast wrap from Starbucks so it definitely felt like a treat. Once Ryder was up, I opened the homemade gifts and cards from the boys and they all made me smile and feel the love! 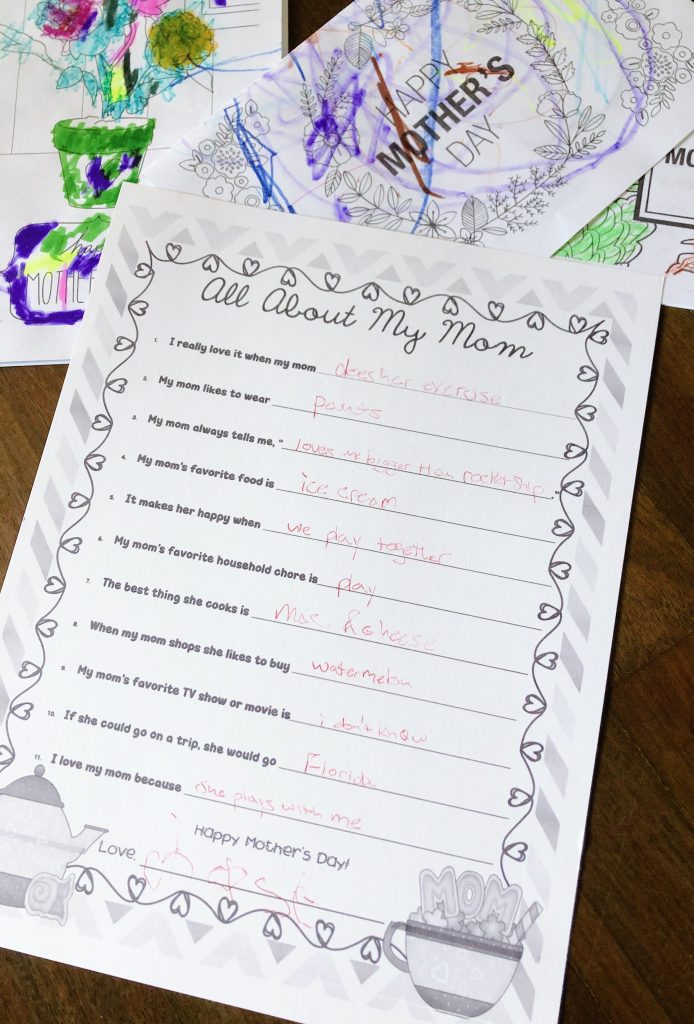 Any other mamas out there love the fill-in-the-blank questionnaires from kids on Mother’s Day? They’re my favorite and reading Chase’s answers is always so fun for me! (Hopefully Ryder will be talking enough to get in on the fun next year!) My favorite answer from Chase this year was “My mom always tells me she ‘loves me bigger than a rocket ship.'” I say this to Chase every night to kick off our back-and-forth nighttime “I love you” routine right before I shut his bedroom door for the night. He won’t go to sleep unless we say everything perfectly in order and it melts me every time.

As for our Mother’s Day adventure, Ryan planned a family hike at one of our favorite state parks. The timing worked out well since state parks opened back up on Friday evening and after a bit of a drive we arrived at Stone Mountain State Park around 10 a.m. (Flashback hiking trips to Stone Mountain: When we first moved to North Carolina in 2014 / When we took Chase with us when he was 7 months old / Again with Chase in 2017 when he was one month younger than Ryder is now)

We had plans for Ryan to carry Ryder most of the hike in our hiking backpack and figured Chase would walk along with us. 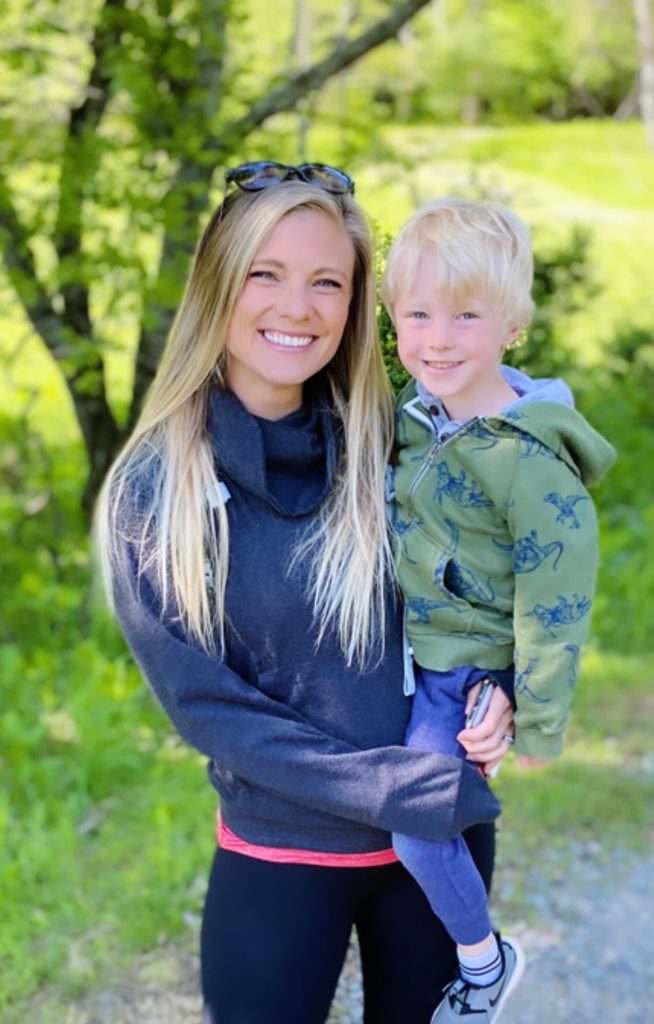 We headed into the hike with zero expectations as for how far we’d go. The hike from the parking lot to the large waterfall is a little more than half a mile and we tackled that part of the trail first. 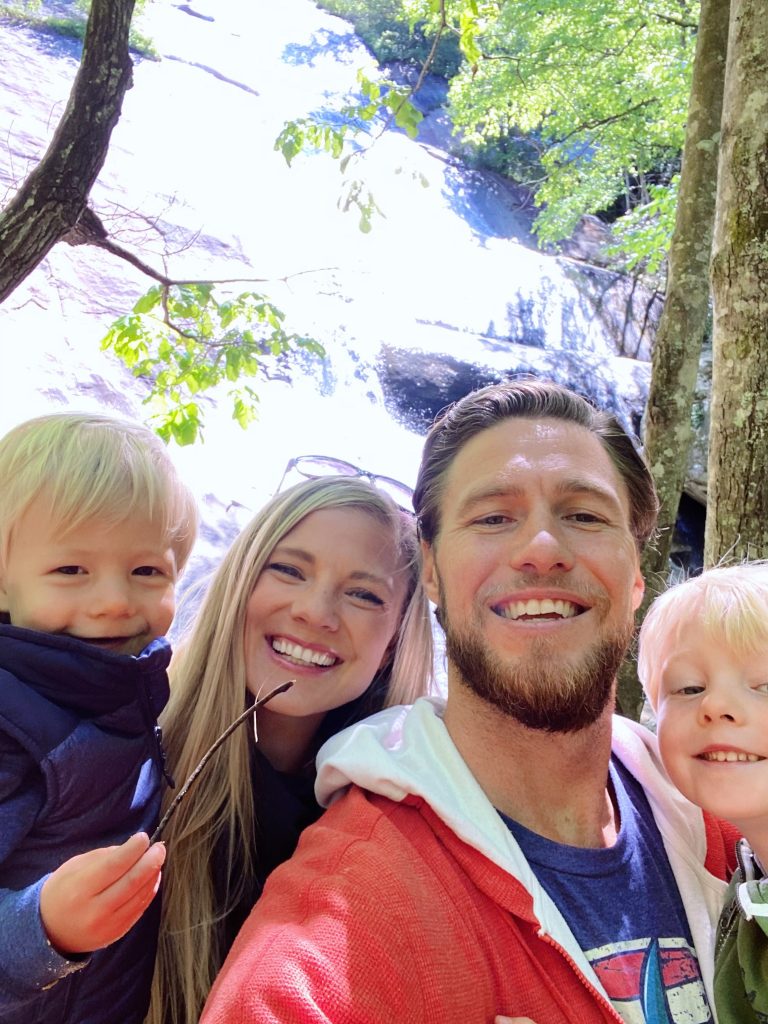 Both boys were all about it! Ryder walked almost the whole way but rode in the backpack for the descent down a bunch of stairs to the base of the waterfall. 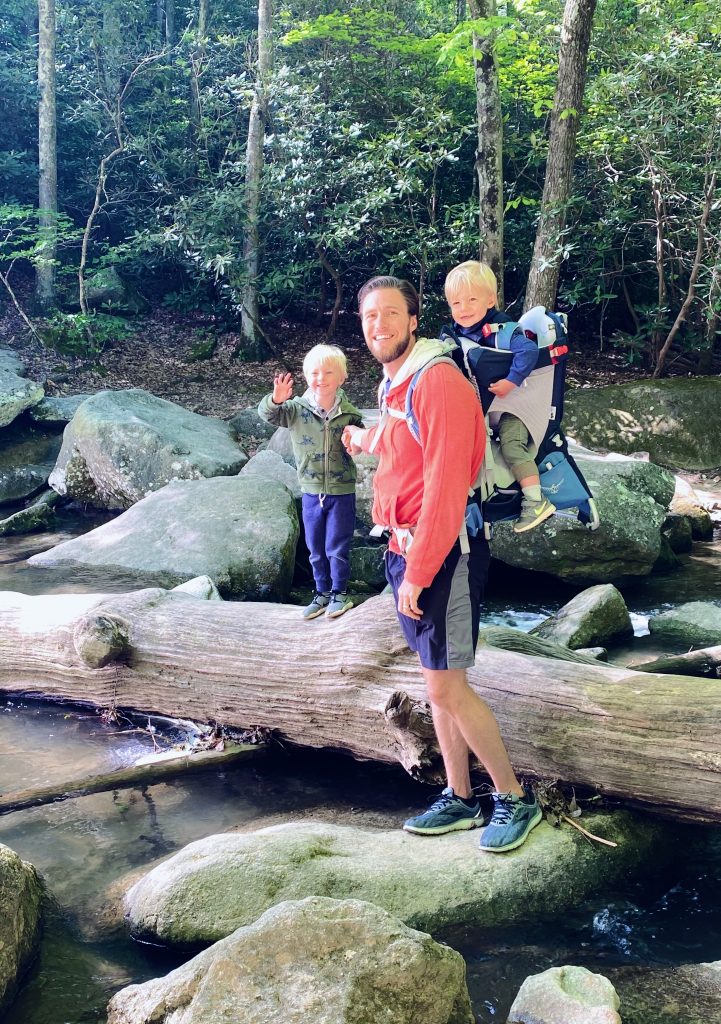 (Note: This is the current version of the Osprey hiking backpack we bought back when Chase was a baby. We’ve had it for years and the quality is fantastic. Both boys have seemed quite comfortable in it whenever we’ve used it!)

The boys loved being able to play with sticks and stones in the shallow water at the base of the falls and we hung out there for quite a while.

We then made our way back up to the start of the trail and gave the boys the option to head home or hike up to the top of the mountain which was just over a mile and a half away. Their energy levels were still through the roof so we started hiking and were unbelievably impressed with both Chase and Ryder on this hike. Ryder was in and out of the hiking backpack a bunch (he wanted to walk like Chase but then would ask to go back in for a break or a snack) and we only carried Chase on certain steep parts that seemed to be a little much for him. 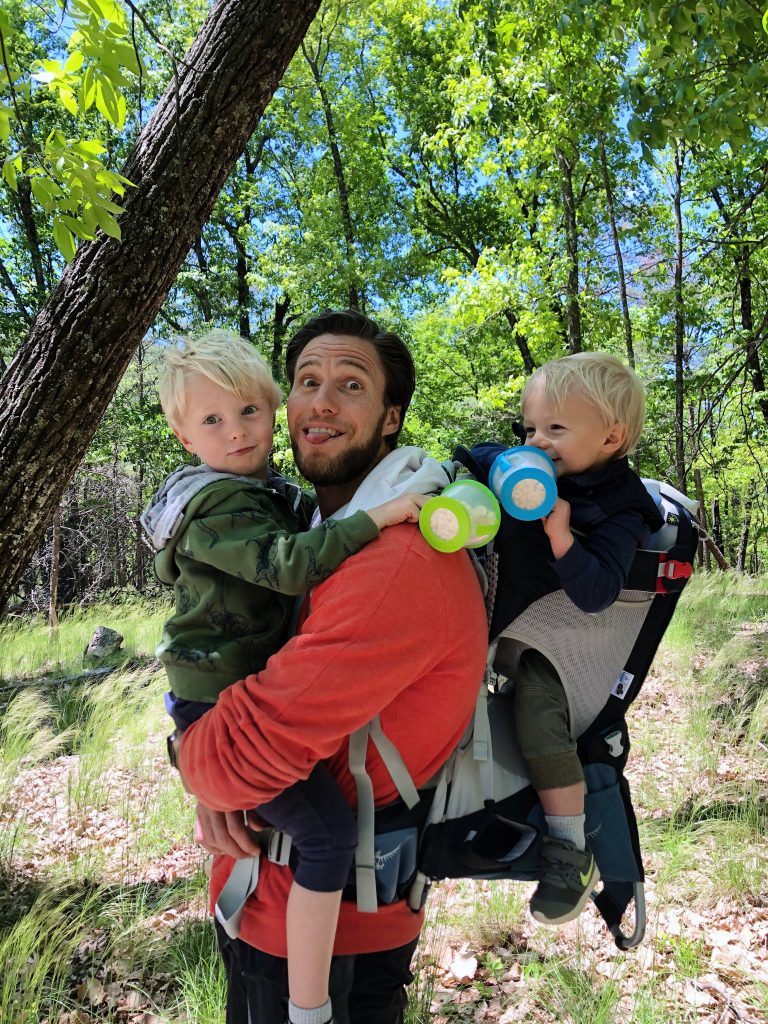 I had to snap a picture of Super Dad when he had both boys in his arms. He swore it wasn’t too much and that Chase helped balance Ryder’s weight but it looked pretty miserable to me! (And yes, I helped with the carrying even though there is no picture proof. Haha!)

The views from the top of the mountain made the hike more than worth it and it seemed like both boys got a huge burst of energy when we made it to the summit. 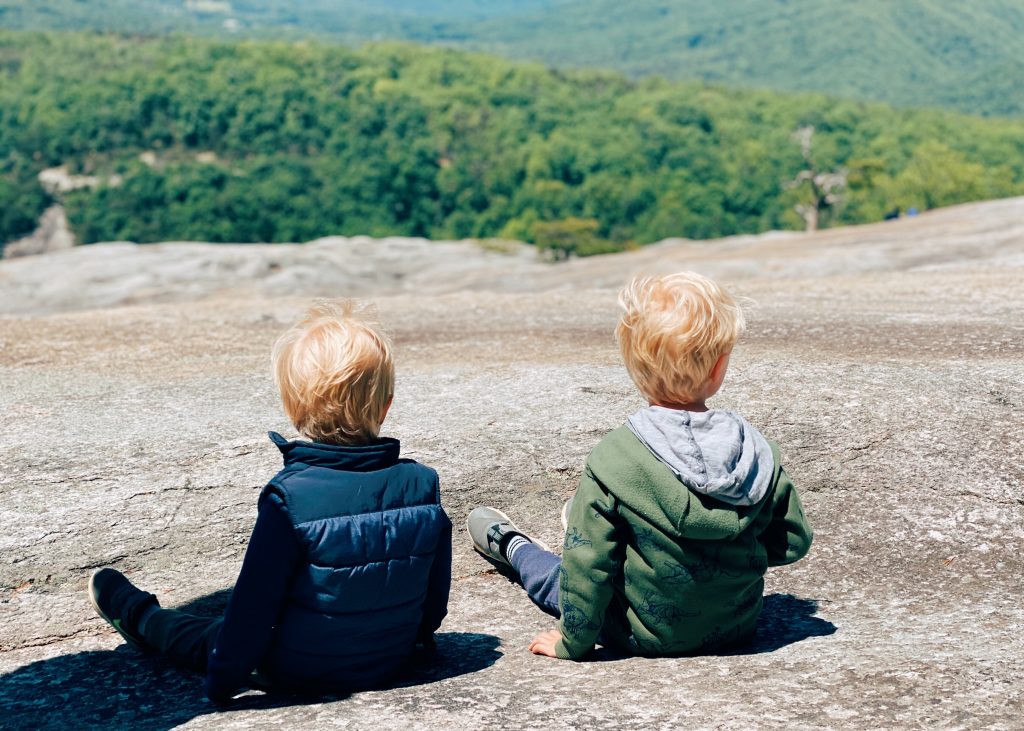 We stopped for another long break and ate a bunch of food, drank some water and let the boys play with some of the small cars we packed before making our way back down the mountain. We ended up out there for a little more than three hours total and it was such a nice way to spend Mother’s Day. 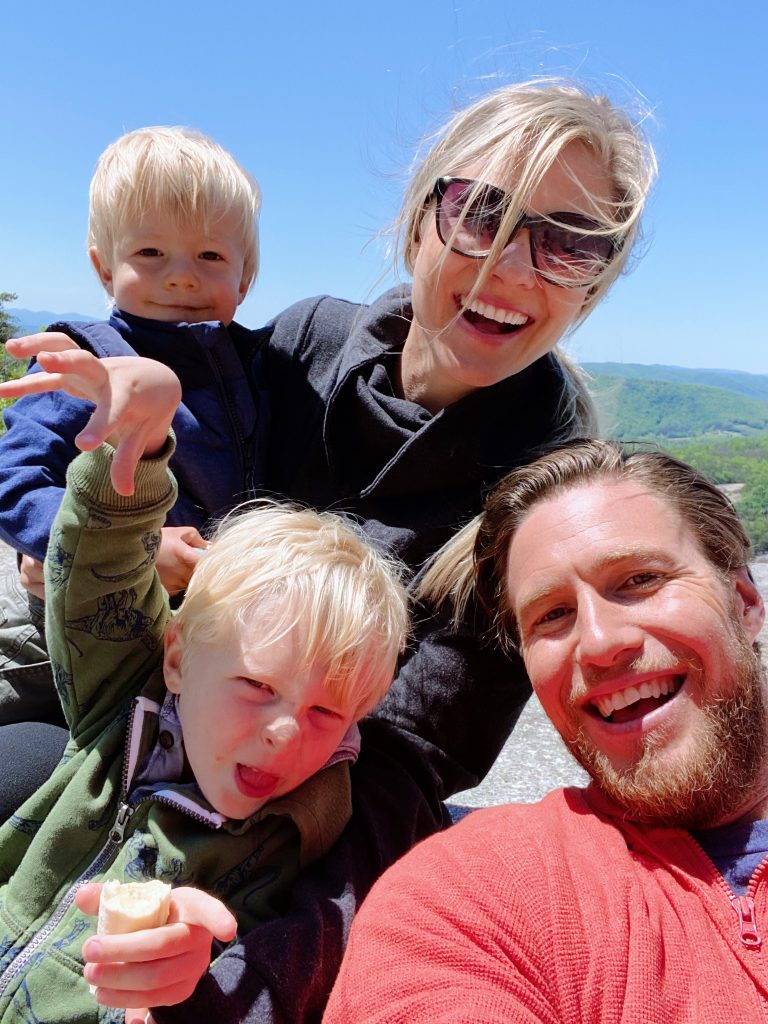 (For those of you who have kids who will smile sweetly for the camera, teach me your ways! Chase was being a dinosaur in the above photo and we’ve learned to roll with his silly antics. Haha!)

By the time we made it back to the car and most of the way home, we were ready for more food so I called ahead and ordered two French dip sandwiches from Table 31 for me and Ryan and two pizzas for all of us to share from Novanta off Langtree and we had a little picnic. It was a great way to end the day before we headed home, hung out in the front yard with Sadie and then did the whole bath time + bed time routine.

I ended Mother’s Day feeling very grateful as I dove into a new book and read in bed until my eyes would no longer stay open. I just started reading The Gown, a historical fiction novel that centers around the women who created Queen Elizabeth’s wedding gown (recommended to me by blog reader Melissa!) and it’s fantastic so far. I’m already looking forward to reading more of it this evening!

And now I’m off to do the whole mom life thang with the boys since I hear both of them making noise on the monitor. I hope you have a great Monday and a wonderful week! Thank you for making my blog a part of your day!