Navigation
Hey guys! How are you? I hope your weekend was a good one! Our weekend began on a high note with a lovely dinner… 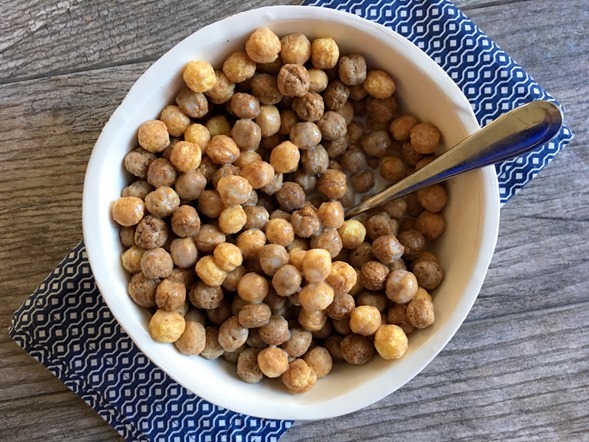 Yep, cereal for dinner is a high note. Especially when that cereal happens to be Reese’s Puffs. Love it.

After watching one of ESPN’s 30 for 30 documentaries about The Prince of Pennsylvania on Friday night, I convinced Ryan to watch the first episode of Fuller House with me. It was everything this cheeseball sitcom loving Full House fan hoped it would be. So, so cheesy but so great. It felt like an old episode of Full House to me with the same corny jokes and Ryan kept laughing at me smiling throughout the episode. Nostalgia, my friends. It will get ya!

Saturday began like most do around here with a fitness-centered morning. Once Ryan was done with his workout, we fed Chase some butternut squash together (he LOVED it) before it was time for me to head out to a 9 a.m. Burn Boot Camp class. It was sweaty and phenomenal, as always.

By the time I made it home, Chase was already 20 minutes into his morning nap, so I grabbed a shower and made a morning snack before Chase woke up and Ryan’s coworker and her husband and 2-year-old boy came over for a few hours. We enjoyed talking to them about what’s to come for us as Chase gets older and had a nice morning just hanging out before Chase went down for another nap around 1 p.m.

I used nap time to make myself a late lunch and work on blog stuff while Ryan and Sadie went for a walk. A trip to the grocery store was desperately needed, so my lunch ended up being a random assortment of the stuff we still had left in the fridge and pantry. 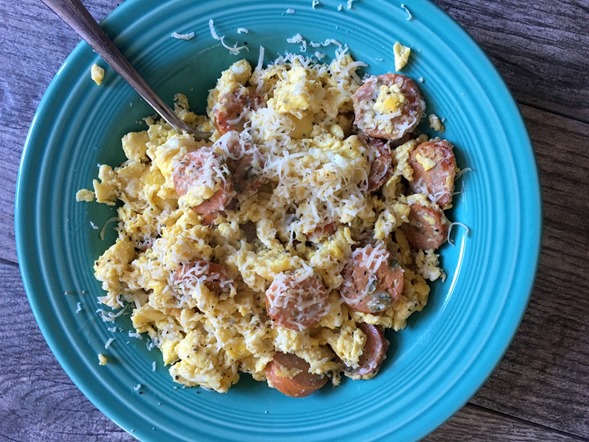 Scrambled eggs with chicken sausage and cheese and a back-to-basics smoothie made with frozen bananas, peanut butter and milk. 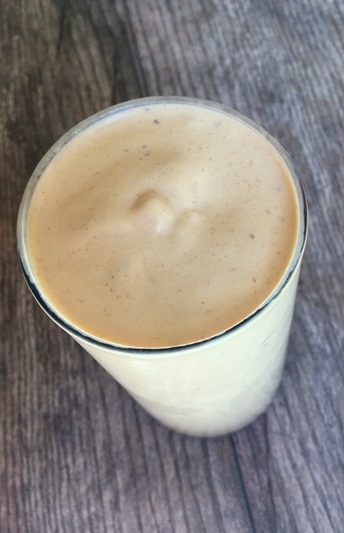 By the time everyone was back home and awake, I was in the mood to get out of the house and suggested a trip to Davidson so I could make a return at the local bookstore and figured we could grab an early dinner while we were out. 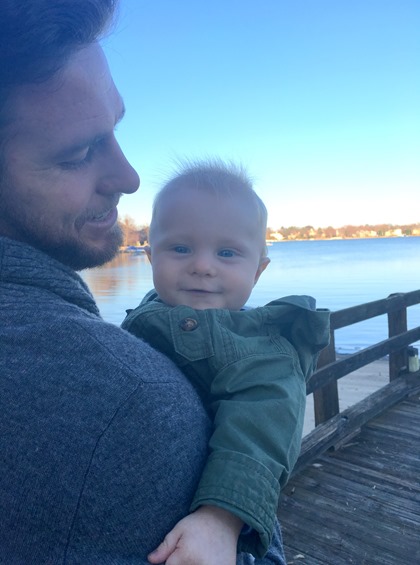 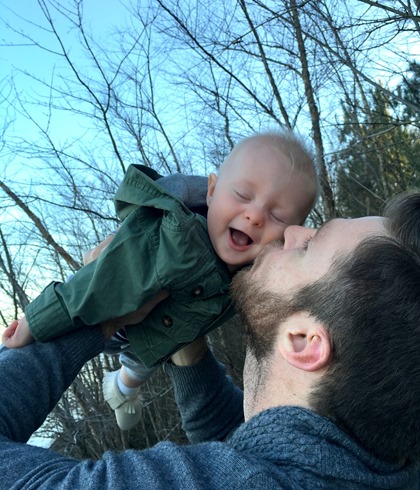 During our time at the bookstore, Ryan pointed out a print of downtown Davidson that we now have on our radar for a possible option to frame and hang in our foyer. We love Davidson and think this would be a nice way to add some local flare to our home! 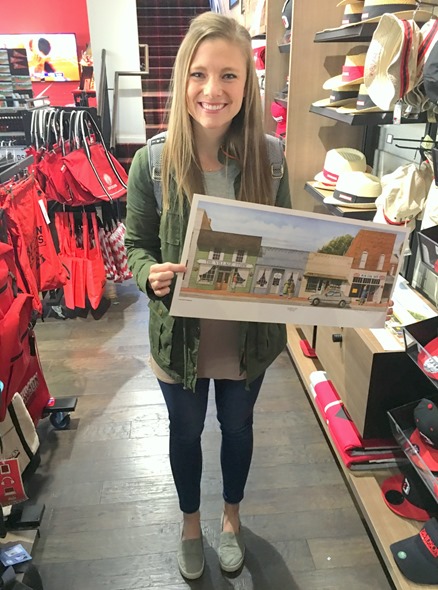 We then headed out and walked to Summit Coffee for his and hers hot beverages before walking another half a mile or so to Carburrito’s for an early dinner. 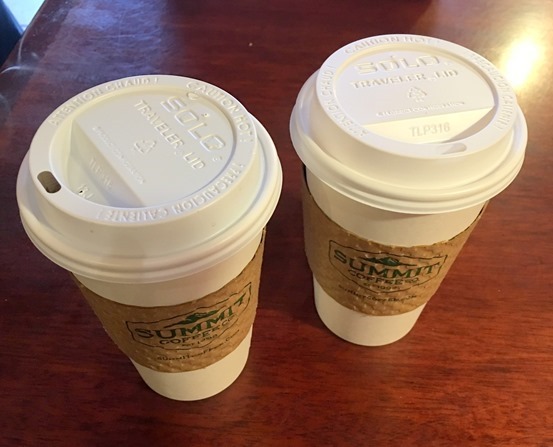 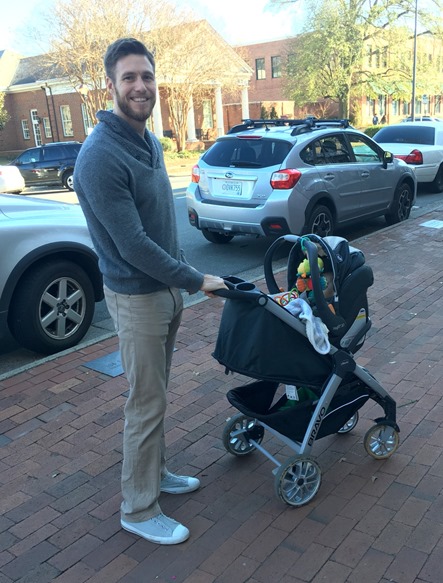 I opted for a giant salad topped with pork and also ate a wedge of Ryan’s quesadilla. We left full and happy and drove to Publix to pick up The Martian on Red Box and some movie snacks for a wild and crazy Saturday night at home. 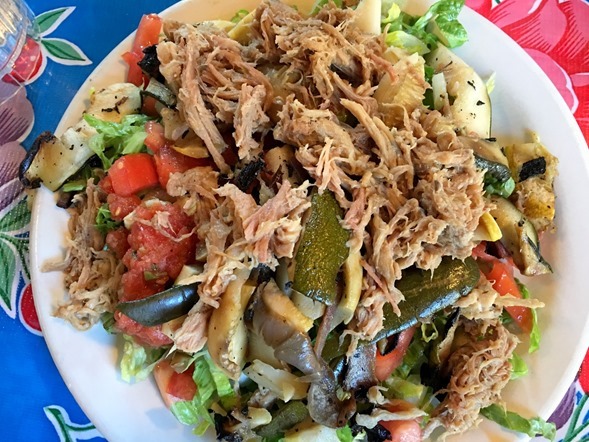 We both thought the movie was entertaining and made it the whole way through (a major feat for us when it comes to movies lately) and I was fast asleep by 10:30 p.m. And then something glorious happened… I didn’t wake up until 4:45 a.m.! I typically wake up multiple times a night, even now that Chase is sleeping better, and have the hardest time getting back to sleep. I’m assuming Chase must’ve been extra quiet or something because I slept like a rock straight through until nearly 5 a.m. Even though I tossed and turned from that point on until around 7 a.m., it was still one of the best sleeps I’ve had in ages. Woop!

Sunday began with coffee, banana bread protein pancakes and a fun FaceTime session for Chase with my mother-in-law! Then, once Ryan headed off to the gym and Chase went down for a nap, I made a grocery list and started working on this blog post before we were off on our adventure for the day.

Ryan and I were in the mood to see some mountains and decided to make the drive to Stone Mountain State Park to tackle a 5-mile loop with Sadie and Chase. We visited Stone Mountain one time before in the heat of the summer when we first moved to North Carolina and were excited to be back! 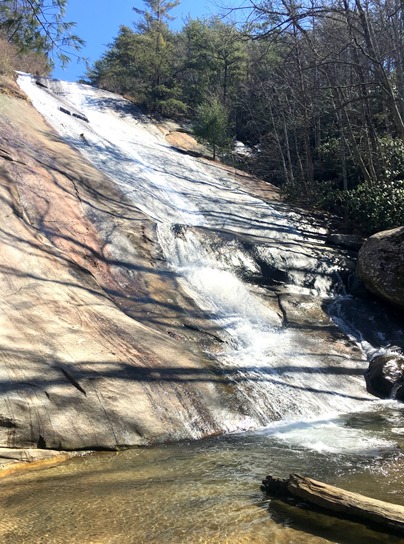 Even though many of the trees were bare and it wasn’t as green as we remembered, the hike was still beautiful and we were rewarded with breathtaking views when we made it to the top of Stone Mountain. Plus, Sadie had an absolute blast running around and sniffing everything which is always such a joy to watch. 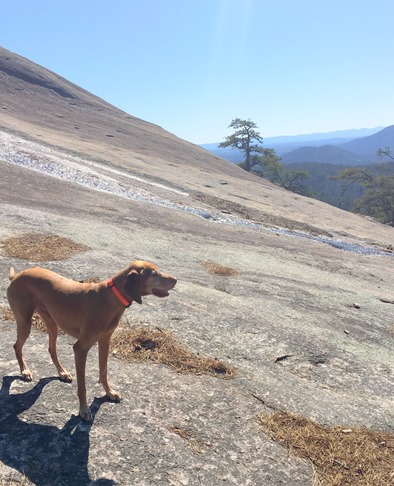 Chase was the wildcard of the trip, as we weren’t really sure how he would handle over an hour in the car followed by a couple of hours in the ErgoBaby carrier, but he was a total champ! He slept in the car but stayed wide awake during the entire hike. He seemed to love being outside and watching Sadie sprint all over the place. 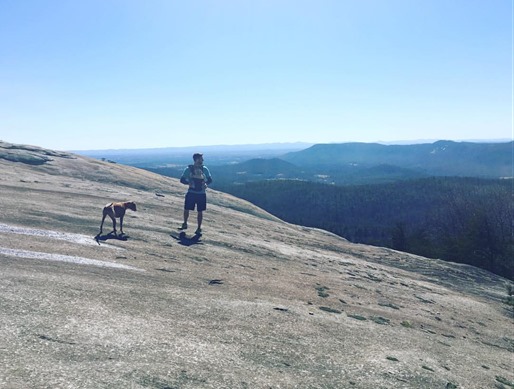 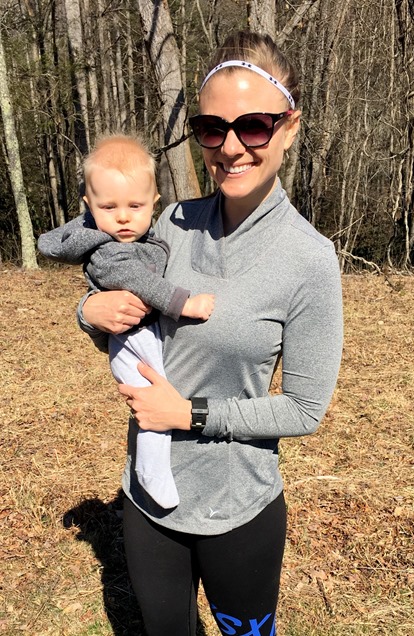 We ate lunch along the trail and didn’t make it back home until just before 4 p.m. The rest of our Sunday was spent hanging out at home as a family, relaxing and enjoying what was left of our weekend.

I hope you guys had a good one, too!