Navigation
After receiving a request from a reader, I am in the process of compiling a list of tips for new runners.

I have a bunch of different thoughts to share and clearly you guys do too!  Thanks to everyone for sharing  your running tips after my last post. Stay tuned for the upcoming tips for new runners post! 😀

Before posting my tips, I figured I should give you some insight into my running background (or lack of a running background). 🙂 I am definitely not a runner with a natural ability to kick some serious running booty, but by working at it and going out there and just running, I’ve built up the ability to tackle several miles without difficulty. Trust me when I say that back in 2007, I wasn’t sure if I could run an entire 5k without stopping (or puking!).

So, without further ado, here’s my running story (with a few pictures thrown in so you don’t fall asleep)!

When I graduated from college and entered the real world, I found myself a lot less busy than I was during my four years at UCF.

During my senior year, I took a full load of classes, had a part-time internship, a part-time gig with student government and was actively involved in several clubs. I feel better and tend to thrive when I have a lot on my plate, so when I graduated and only had the commitment of a full-time job, I suddenly felt like I had a lot more free time.

No homework? No meetings? What was I supposed to do?

I felt like I needed a goal. I needed something to work toward. 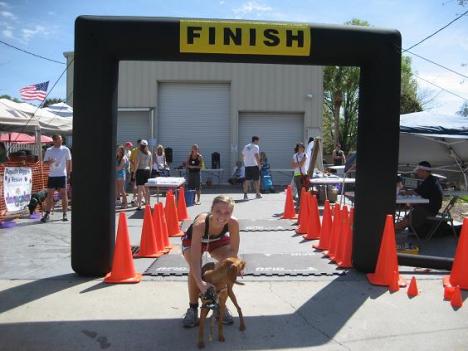 Smiling After Running a 5k with Sadie

Throughout college, I worked out regularly, but was never a runner. I always admired those who could slip on a pair of sneakers and go out for a run like it was no big deal.

I began looking into running races and on a whim I signed up for a 5k in August 2007 just to see if I could run 3.1 miles non-stop. My goal for my first 5k was to simply run the whole thing.

When race-day came, I headed to the start line with my own personal running mantra for the day: “Just keep running. Run as slow as you want, but just keep running.” Knowing I could run as slow as I wanted, even if it meant that I was practically walking, made me feel less nervous.

After a 5 Mile Race

I managed to accomplish my goal and ran the entire thing. I even surprised myself by enjoying the experience. I loved the energy of the race and the camaraderie I felt with the other runners who shared a similar interest in fitness.

The 5k was enough to spark my interest in other running races. I searched for races in my area through the following websites:

When I saw that there was a half marathon at the beginning of December in Orlando, I immediately became interested.

I knew in my heart I finally found the goal I was looking for. Committing to running a half marathon would require lots of training, patience and time and I set out to find a training plan I thought I could follow.

I found several training plans on Hal Higdon’s website and thought the Half Marathon Novice Training Plan seemed like a perfect fit. Since my goal for the half marathon was to simply run the whole thing and simply cross the finish line, this plan was ideal. It didn’t complicate training with speed drills, hills or anything that overwhelmed me.

I veered from the training plan a bit, but followed it almost exactly when it came to the long runs. The only long run I missed was the 10 mile run the week before the race because I was sick and throwing up on the day I typically did my long run (Sundays).

The longest run I did before the half was a nine-mile run, which made me a little nervous. The actual race distance was 4.1 miles more than that!

Ryan decided to run the half marathon with me on the day of the race! (Must be nice to have that kind of natural ability, huh?)

I can honestly say his support and presence made a huge difference for me. Having a running buddy to tackle 13.1 miles with was motivating and made me feel like I wasn’t in it alone.

I am happy to say we ran the entire half marathon together. When I crossed the finish line I felt proud and powerful, even though my body felt pretty weak!

I will be starting my training for another half marathon (the Chicago Rock ‘n’ Roll Half Marathon) in June this year. I’m a little nervous because I haven’t run a half marathon, or a race longer than a 10k since 2007! I plan to approach my second round of training as I did my first: Run regularly, but run at an easy pace and enjoy the training process.

I used to think of my lack of natural running ability as a setback, but now I look at it as a gift. Since I know I am not going to bust out a half marathon in 1:30, I don’t feel the pressure to run really fast. I allow myself to enjoy the running experience and run at a pace that is comfortable for me. Though I know many runners thrive on running fast and beating previous times, eliminating the pressure of running for time allows me to enjoy long runs and races.

Are you a runner? Do you want to be a runner? What’s your running story?