Good morning, my friends! How are you guys doing so far this week? It’s been a good week but a busy one over here so far. The self-imposed pressure to get a ton of stuff done before our baby’s arrival has definitely kicked in big time but fortunately I’m making headway which makes me feel slightly less stressed than I felt last week when my to-do list seemed to be a mile long.

My Tuesday morning began with a big bowl of oatmeal made with pumpkin, flax seeds, chia seeds, blackberries, cinnamon, collagen, cacao nibs and almond milk and topped with a sprinkling of pumpkin seeds. 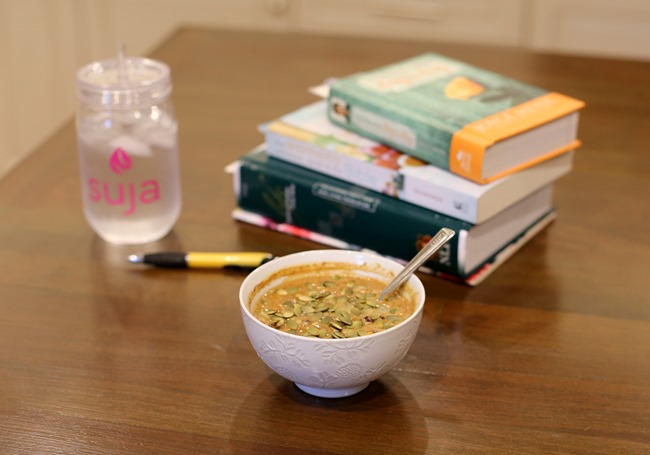 I sat down with my devotionals as I ate my oatmeal and it was just the way I needed to begin my day. I’ve let my morning devotional time slip here and there over the past month mainly because my sleep has been so terrible. If I sleep in as little as an extra 30 minutes in the morning, I feel like I need to use every second to work before Chase wakes up otherwise I feel behind all day long. Yesterday morning served as a good reminder that waking up a bit early is more than worth it to begin my day with my devotionals!

Oh, and this is kind of random, but as I was putting my devotional stuff away, I realized the kitchen cabinet I cleaned out months ago following the advice I read in A Simplified Life is STILL clean and organized!

Here was the BEFORE: 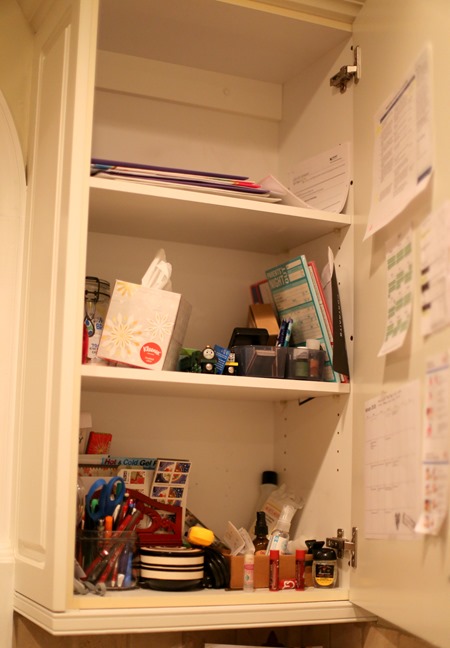 And this is the present-day AFTER (5 months later): 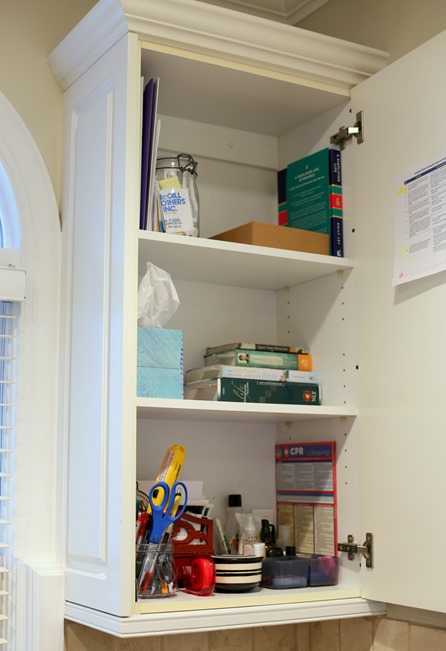 It made me think back on the other spaces I’ve organized using the tips in A Simplified Life and ALL of them are still rockin’ a more organized look. This is HUGE for me since so often I’ll clean up a space and a few weeks later it’s a disaster again but I think the tactics in that book (taking everything out of a space to evaluate, eliminating duplicates, etc.) worked better for me than winging it in the past.

Eventually I made my way into my office to work until Chase was awake and ready for action! Chase is in half-day summer camp this week (I have him signed up for three sporadic weeks of camp spread throughout the summer and this is one of our “on” weeks) so after reading a few books and playing together in his room, we headed downstairs where Chase ate breakfast and I packed his lunch.

We were out the door a little before 9 a.m. to make it to Chase’s school in time for summer camp drop off and once he was happily playing with his friends, I headed back home. I opted out of the gym yesterday morning in favor of taking Sadie on a walk and we covered right around two miles while I caught up on a past podcast episode of Wait, Wait Don’t Tell Me. 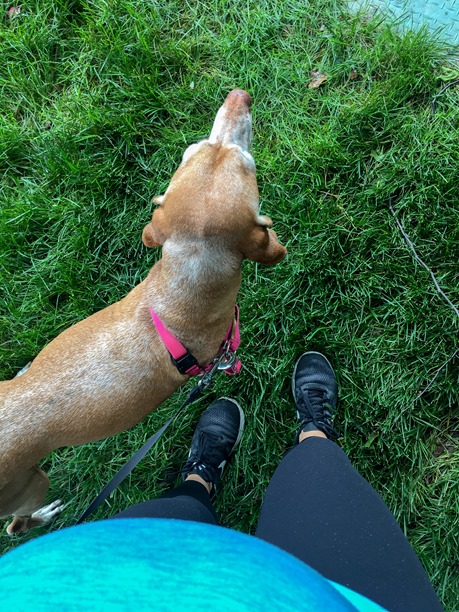 Even though it was just after 10 a.m. when we wrapped up our walk, my stomach needed food, so I whipped up a batch of egg salad to eat with some Simple Mills crackers. 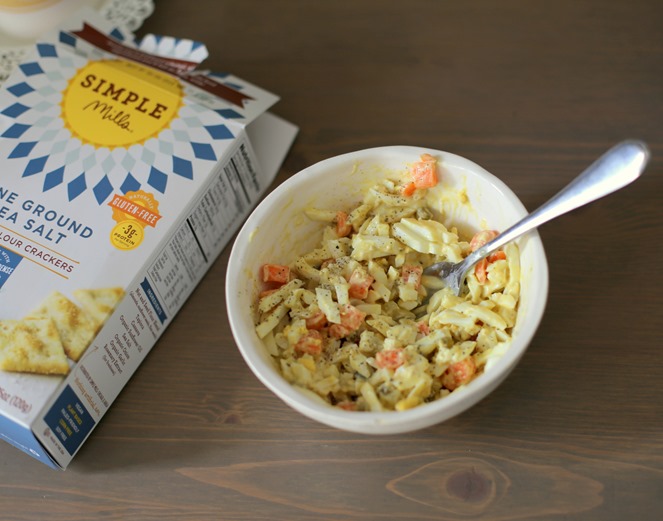 Plus a golden kiwi! 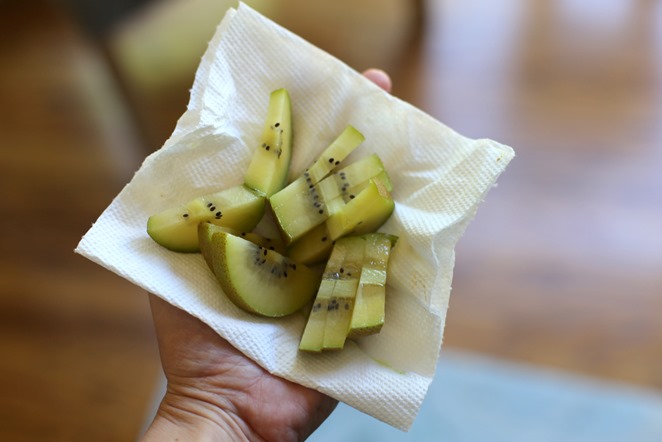 As I ate, I responded to some time-sensitive emails and did some social media scheduling before I had to head out to my eyebrow appointment which lasted all of 10 minutes. (I’m going every two months or so and just use this cheap tint kit to give my normally iridescent blonde brows some color in between appointments if they start to disappear on me.)

With my brows shaped and my face nice and red and blotchy from the wax, I headed back to Chase’s preschool lookin’ fine and scooped him up before heading home. We grabbed a snack to bring with us to enjoy on the back patio swing while we played fetch with Sadie and it became clear pretty quickly that Tuesday was going to be a No Nap Day in our house. 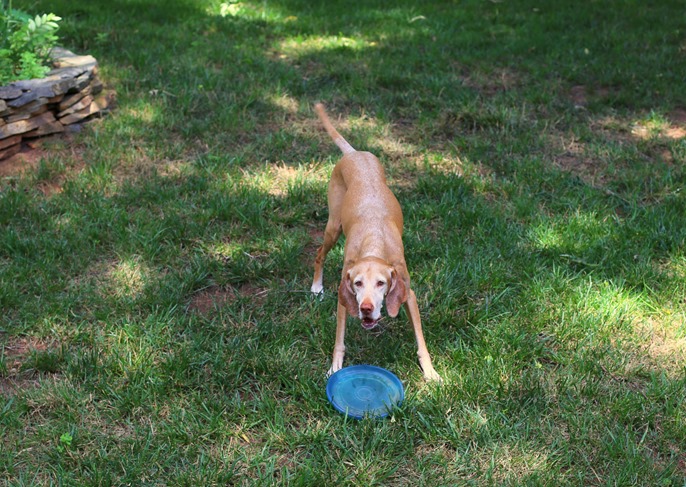 We have a few no nap days a week right now and rather than fight it, I decided to take advantage of Chase’s seemingly endless energy and take him to Birkdale Village for a haircut before we grabbed his and hers smoothies at Clean Juice and met up with a friend at the splash pad for some afternoon fun. 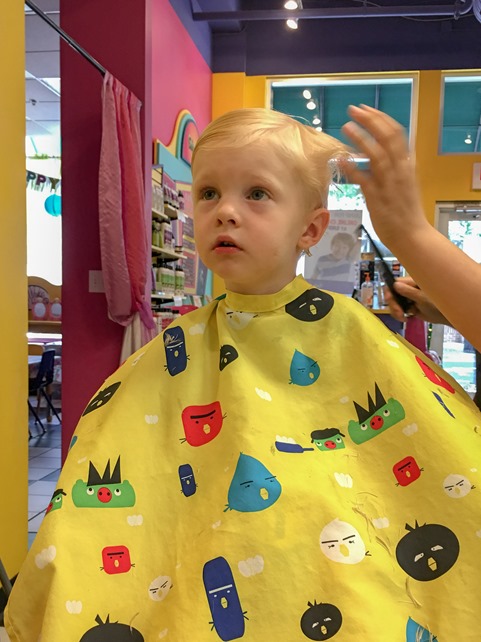 A haircut for Chase was one of those random things on my to do list since his hair was basically a giant fluffball and beginning to get in his eyes and I’m pretty sure I walked into Snip-Its with a two year old and left with a five year old. 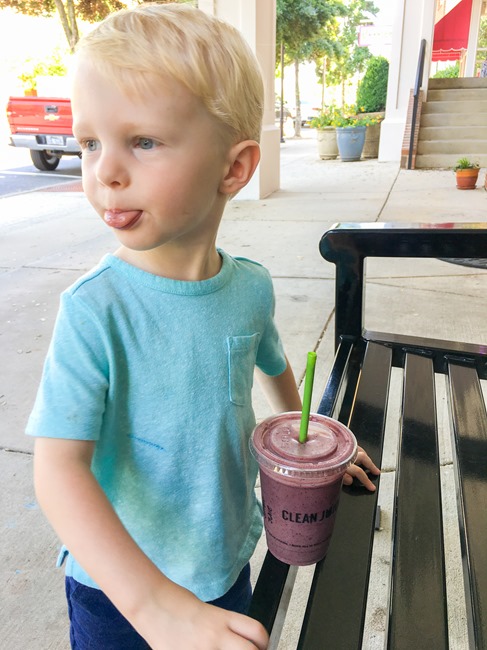 What it is about kids’ haircuts that make them look so much older!? My little man!

We had a fun afternoon at Birkdale Village before we made our way back home and threw together a roast chicken for dinner. I had grand plans to follow Ina Garten’s Perfect Roast Chicken recipe to a T but cut some corners for the sake of brevity and we still loved the end result! (I roasted it upside down to make the breast meat extra juicy.) 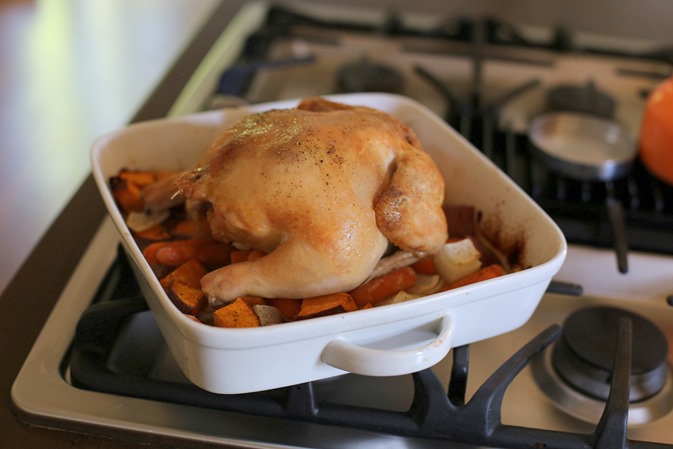 Ryan arrived home on the early side of the evening which was a nice treat and we spent some time hanging out as a family as the chicken roasted away.

I also took a much-needed shower before dinner and realized how AMAZING it feels to take an evening shower on occasion. (I am usually all about nap time showers.) I did a load of laundry earlier in the day to clean our sheets and I’m convinced there’s something magical about climbing into freshly cleaned sheets after you’ve had a shower at the end of the day. Bliss!

We made our way upstairs after dinner and Ryan and I took a few things down from the attic that we’ve been meaning to bring back out before our baby arrives, including some swaddles and clothes, a Rock ‘n’ Play (worth its weight in gold!), baby bath tub, activity play mat (Chase loooved this!) and a 4moms mamaRoo swing (Chase never liked this thing but we held onto it hoping it might be a hit with baby #2). 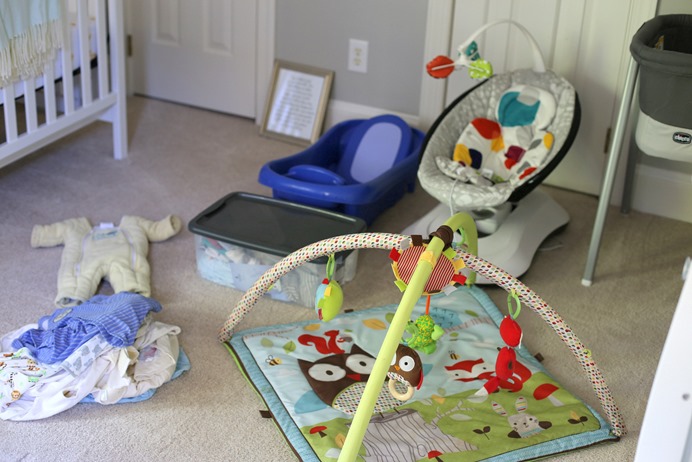 Just seeing all of these baby items made me realize for the thousandth time how FAST the baby phase goes by. It may not seem like it on the fussy days or when your child still isn’t sleeping through the night after months and months (I FEEL YA), but it’s crazy for me to think that I have an almost three year old who I swear just yesterday was distractedly oogling the lights and fans in our house as I tried to get him to nurse. Aaand here I go with my emotions and hormones again!!!

After some attic unpacking, we did the whole bed time routine before I read for a bit and turned out the lights.

Plans for today include my 38-week prenatal appointment this morning which includes an ultrasound. I’m admittedly a bit more nervous going into this one because last week my belly measurements were behind again so we’re just checking on the baby’s growth to be safe. I measured behind my entire pregnancy with Chase so I know that’s perfectly okay but I just get nervous since, during this pregnancy, I’ve been measuring ahead most of the time. Lots of praying is happening over here, as usual!

I hope you guys all have a fantastic Wednesday and I hope to see ya back here tomorrow!