First things first, thank you so much for your kind words about the new look of PBF! I am obviously excited about it and am thrilled so many of you seem to like the cleaner look of the blog. Thank you again to Swoon Creative for making my vision come alive!

Now, let’s get back to the #OmniGames fun, shall we?

Just in case you are catching up, here’s my first recap that includes an explanation of the Columbia Sportswear #OmniGames and the #Omniten crew: The First #OmniGames

When we last left off, I was paired with Rebecca and ready to compete in the first day of the #OmniGames! 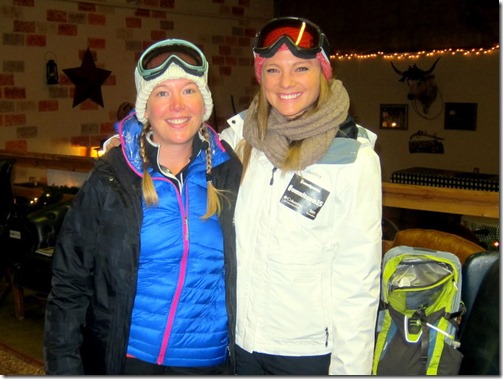 Day one included the first five events of the #OmniGames. Each team rotated through the events over the course of a little more than four hours. 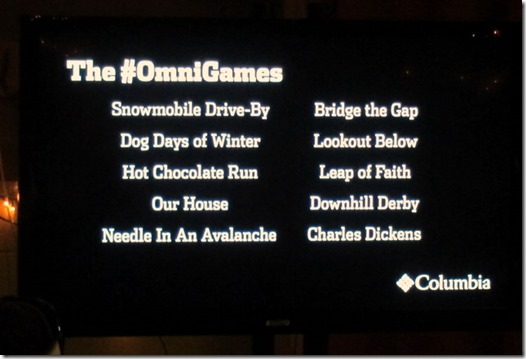 First up for our team was the Needle in an Avalanche event where we learned how to search for a beacon in the snow to try to locate a “person” who had been buried in an avalanche. 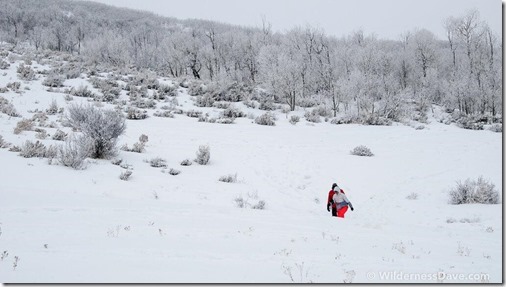 (Thank you to David Creech for the awesome photos featured above and below.) 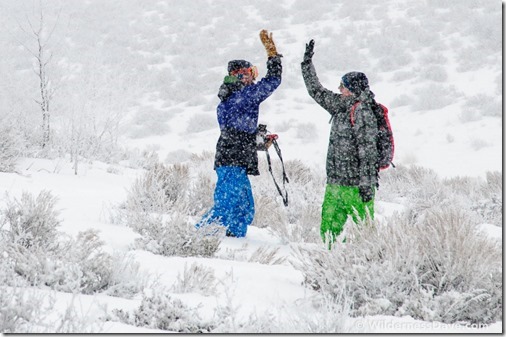 Rebecca and I found our beacon in less than a minute and were told that we would’ve saved a life! Woop! (Apparently you have five minutes or less to find someone buried in an avalanche before they may not make it.)

The next event for our group was Dog Days of Winter. This was the event I was most excited about going into the day because it involved dog sledding! 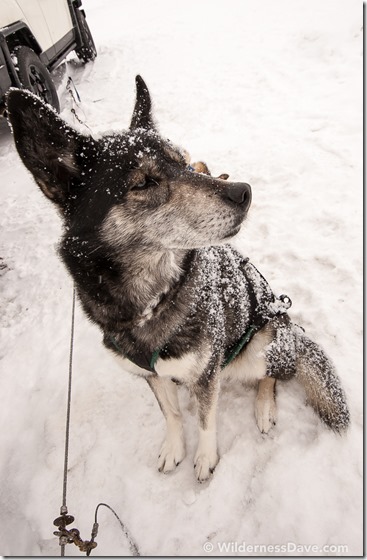 The dogs were so sweet and friendly until they realized it was time to run. Once they saw our group pile into our respective sleds, they started to bark and jump around like crazy. They wanted to go! 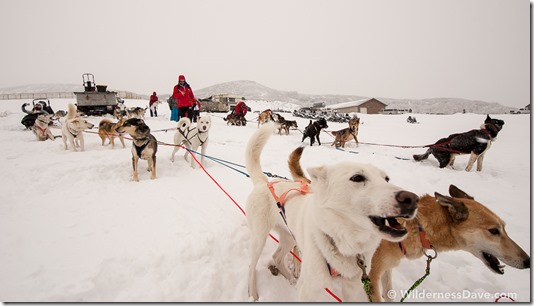 The Dog Days of Winter challenge was meant to test our intellect since we had to remember facts our musher told us as we were pulled along a beautiful, snowy course by some very enthusiastic dogs! 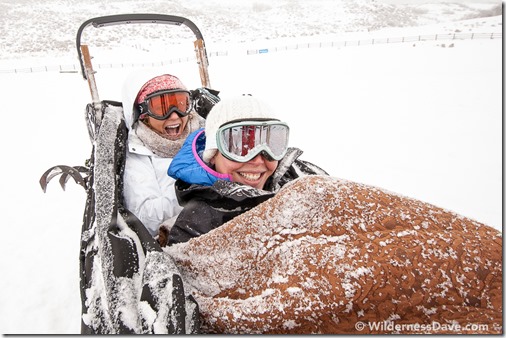 The dogs were adorable and clearly loved running around outside. We did well on our quiz and remembered the commands for left and right (“Haw!” and “Gee!”), the name of the rope the dogs were tethered to (tug rope) and other various facts about dog sledding. 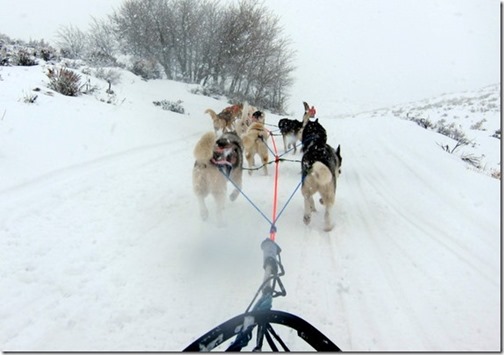 Dog sledding was quickly followed by the Snowmobile Drive By, one of my favorite events of the day! 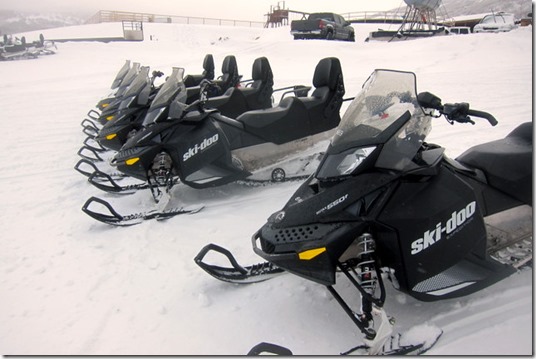 I had never driven a snowmobile before and had the BEST time cruising through the snow at 30+ miles per hour. 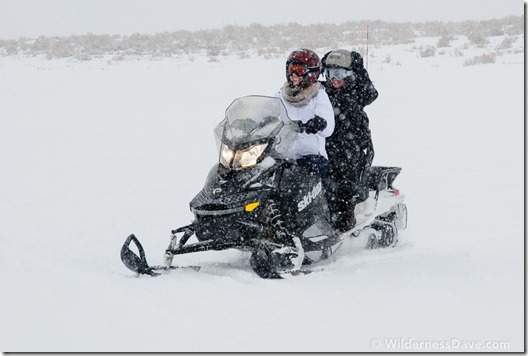 It snowed the entire time we were outside during the #OmniGames events and as I drove my snowmobile, I felt my mind wander a time or two as I looked around and soaked in the beautiful snow-covered scenery around me. I knew I was in the middle of experiencing something I’d never forget and I felt so grateful to be in stunning Park City in that moment. 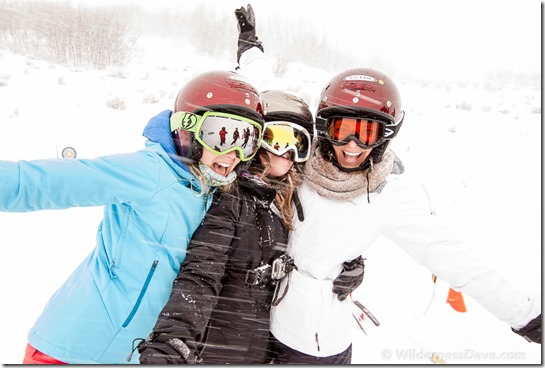 We drove our snowmobiles along a trail for about 10 minutes before arriving at a pair of targets and preparing for the competition part of the event. 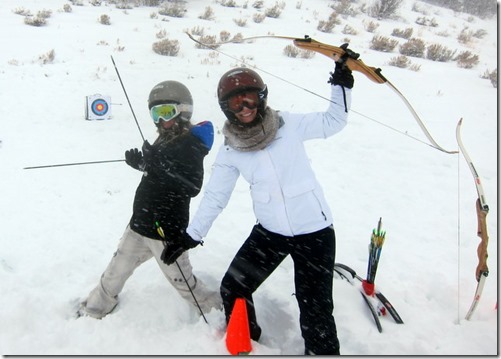 After aiming at the targets and firing off one practice shot with a bow and arrow, we had to shoot at the target three times to try to accumulate points toward our team totals. 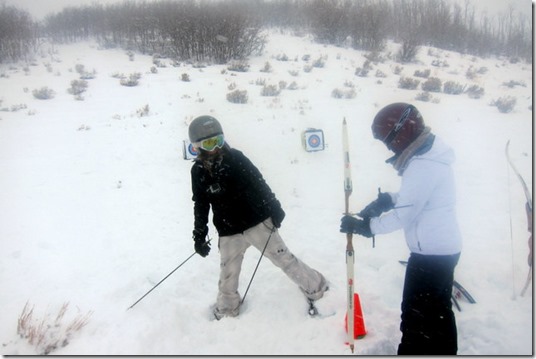 It was much harder than it looked and in our group of six, only two people hit the target one time. I need lessons from Katniss!

Once we collected our arrows that didn’t make it on the target, we had some free time to play around on the snowmobiles which was way too fun. I want to plan a vacation at some point in the future and spend a day riding around in the snow outside!

The Hot Chocolate Run event came next and proved to be the hardest event of the day. We were given 20 minutes to try to start a fire using a magnesium block, a knife and some newspaper. 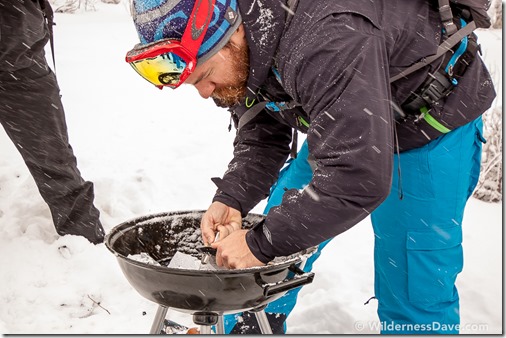 Additional points were rewarded if you could get water to boil on top of the flames and make a cup of hot chocolate. Rebecca and I tried our best to accumulate a pile of magnesium shavings and spark a flame with our knife, but the snow and wind made it very, very difficult because everything kept getting wet and the wind blew the magnesium shavings around. We tried to shield our station, but in the end we only saw sparks and no flames. Bummer!

Our final event of the day was Our House. We were given a tarp, two aspen logs and some string and told to build a shelter that could withstand 30 mile per hour winds and cover two people through the night. Rebecca and I were on the same page with our game plan for this event and immediately got to work. 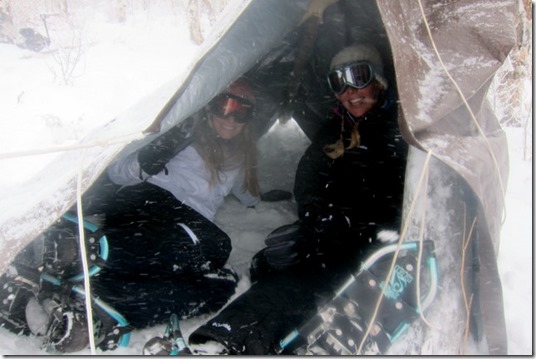 We found a leaning tree to use as the base of our structure and propped the two aspen logs up against tree, securing them in a natural notch in the tree. We then wrapped the tarp around and secured it to another tree using the string before packing the sides of the tarp with snow to keep it in place. We used another string to secure the front flaps of the tarp and dug out a bunch of the snow in the inside of our structure to make additional room. You’ll have to come back next year to check out our tarp house. We’re going to upgrade the kitchen!

With our first day of #OmniGames events under our belts, the #Omniten team boarded a big bus and headed back to our hotel to quickly turn right back around and drive to Deer Valley to check out the World Cup mogul competition. 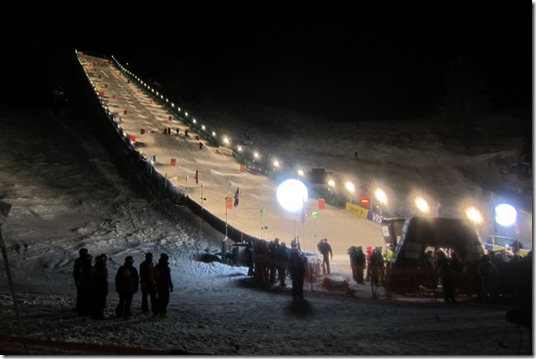 Columbia is the official sponsor of the United States ski team and designed the team’s uniforms for the upcoming Olympics in Sochi. (I’ll definitely share pictures in an upcoming post!) Our group was treated to dinner and drinks as we watched the athletes compete for a chance to go to the Olympics. 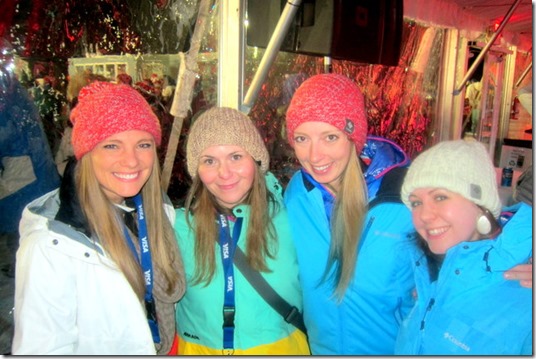 (With Anne, Heidi and Aleya)

The talent of the athletes was incredible and I think we were all blown away by their speed and the difficult tricks they demonstrated throughout the night. Watching the ridiculously high twists and flips brought me back to my high school diving days and I was completely captivated. 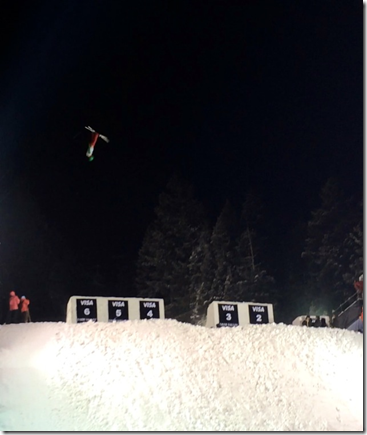 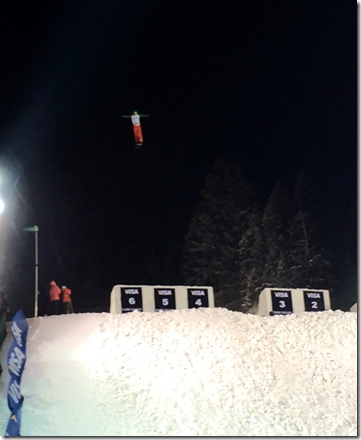 After the competition, our group couldn’t resist dancing around outside (Kriss Kross’ “Jump” came on – Can you blame us!?) but it soon became clear that it was time to make our way back down the mountain.

(Thanks to Gina for capturing this fun moment with Weston, Beth, Ed and Ann!)

Since the lift was closed, we had to walk down the mountain, but most of us opted to slide down the steep or slippery parts of the mountain. 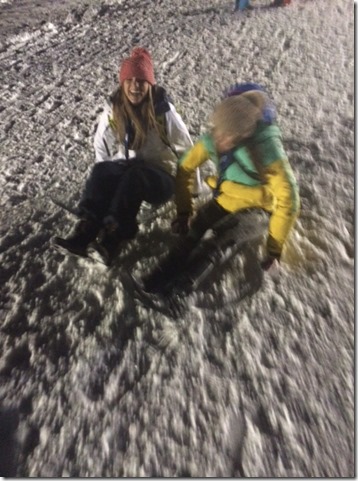 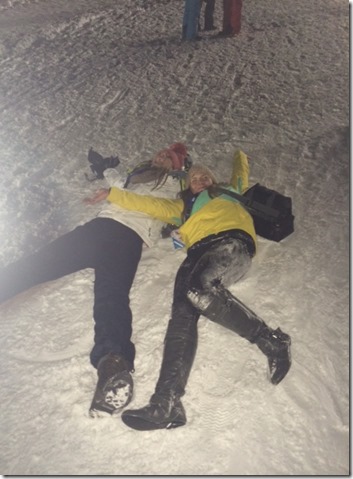 (Shout out to Anne who is way too fun!)

Our group arrived back at the hotel around 10 p.m. The #Omniten team was split up into groups of four to share large suites at the hotel and a good number of us met back up in one of the suites to hang out for a few hours before crashing for the night. It was a long and incredibly fun day!