Navigation
You guessed it! 😀

Today is my one-year blogging anniversary.

On September 7, 2009, I started Peanut Butter Fingers and began an exciting endeavor that has proved exciting, challenging, rewarding, educational and FUN. 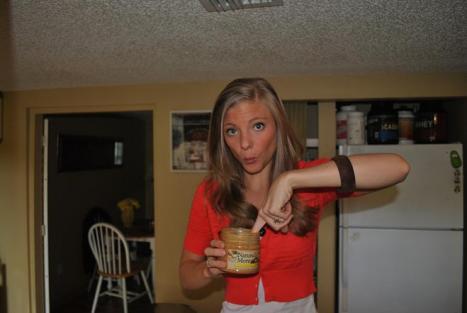 What I Do Best

When I first began blogging, I remember feeling so self conscious about taking pictures of my food. I mean what kind of a nut job takes pictures of a salad or a scoop of peanut butter?

Fast forward one year, and snapping pictures of my meals feels like second nature.  Bloggers are a rare breed of crazy, I’m tellin’ ya.

I started my blog because I love to write and enjoy learning about health, food and fitness.

I continue to blog because of YOU.

You guys know I get all mushy-gushy from time to time and my one-year blogging anniversary sparked that “Oh I just love you guys so much” emotion in me.

Thank you for reading this little creation of mine. Your comments, support and emails truly mean the world and keep me motivated to blog day in and day out. For those of you “silent readers” out there, you are just as important to me I send a big, overbearing hug your way! 😀

Birthdays and anniversaries are often a time of reflection, so in honor of this one year of blogging milestone, I wanted to drum up a few old posts to highlight some big moments that have occurred in my life throughout the past year.

One of my favorite things about having a blog is looking back through old posts and reliving fun experiences through pictures and words.

In honor of my one year blogging anniversary, I wanted to host a lil’ giveaway.

By simply commenting on this post, you will be entered to win a homemade batch of cookies (flavor of your choice), made by yours truly. I know it’s not the most amazing giveaway in the world, but I promise the cookies will be made with lots of love!

I will randomly select a winner tomorrow afternoon.