As I sit here eating breakfast, I have so many thoughts running through my head about yesterday’s Fitfluential blogger event at the Reebok headquarters. 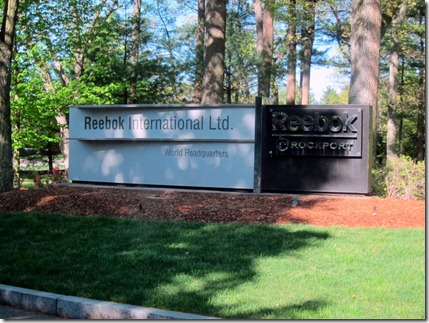 I have so much to share with you guys about the day!

Before the event, participating bloggers were sent a package full of Reebok apparel to wear. I paired a Reebok CrossFit racer long bra top and sports bra with spandex capris and hot pink Reebok RealFlex Transition sneakers that I got in the goodie bag from the Fitness Magazine Meet & Tweet event earlier this week. 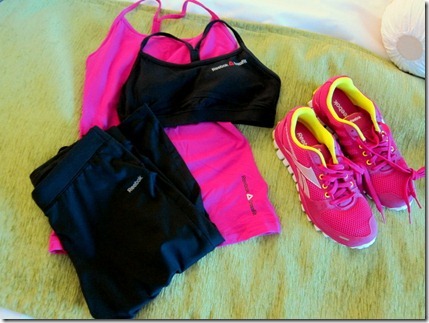 As I was getting dressed, I received a text from Tina that absolutely made me light up inside. It simply said, “Maryloooooou’s!” 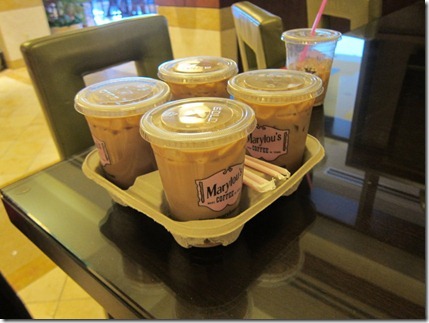 Tina lives just outside of Boston and frequently blogs about Marylou’s and their fabulous flavored iced coffee. A bunch of us were hoping to try the peanut butter wonderful iced coffee that she raves about and Tina was kind enough to go out of her way and pick some up and bring them to the hotel where a group of us stayed the previous night. 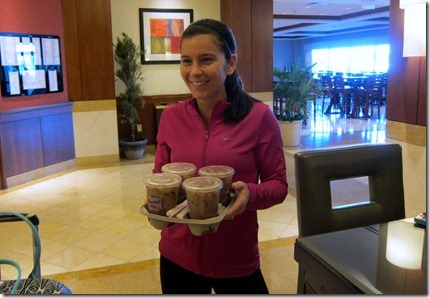 Now that’s what I call service! 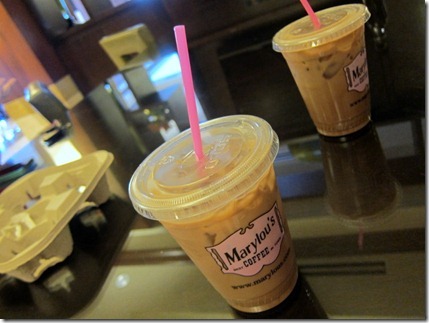 The iced coffee lived up to Tina’s hype (though Sarah would disagree, saying, “Guys, it’s just iced coffee,” but she knows not what she says). I kept saying I thought the peanut butter iced coffee would taste fantastic if you blended it… like some kind of a coffee and peanut butter milkshake. It was sweet and creamy and I slurped it down in no time at all.

Breakfast occurred at the hotel as we waited for the shuttle to arrive to take us to Reebok headquarters.

Since we ate at the hotel, breakfast was unfortunately rather pricey, but at least it tasted good! 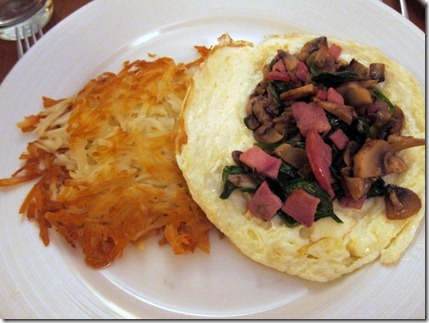 I got the egg white frittata with hash browns. The hash browns were the best part and the crispy edges made me one happy girl. I also shared a bowl of fruit with Courtney. 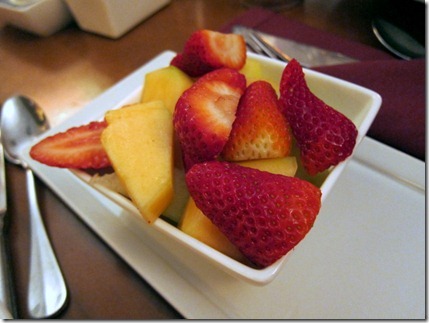 And then it was time to head out and start the day!

As we drove up to the Reebok headquarters, I felt like we were driving onto a very small college campus. 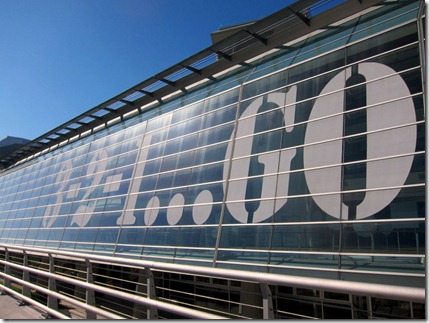 Inside the facility was nice and bright thanks to a ton of windows. (I have a thing for well-lit buildings and houses after living in an apartment that I called “the cave” in Orlando that felt like death and dying because of the lack of light.)

The Reebok employees we met were so enthusiastic, knowledgeable and excited about their jobs. Perhaps it’s because they’re encouraged to use the workout facilities on the campus and, as Elle Woods would say, exercise gives you endorphins and endorphins make you happy!  (How many of you are thinking your grouchy coworkers should do 5,000 jumping jacks a day right now?)

Throughout the day, our group would come back to a small room upstairs that acted as our staging area and was set up with displays of the latest Reebok shoes and apparel. 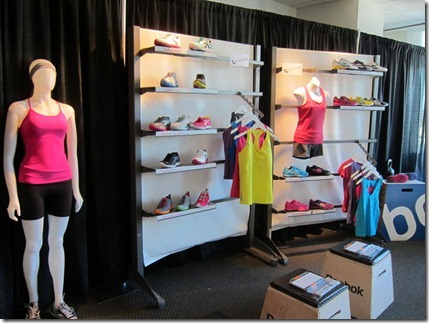 The day began with a PowerPoint presentations outlining what Reebok is all about and the way they want their brand to be viewed by consumers. 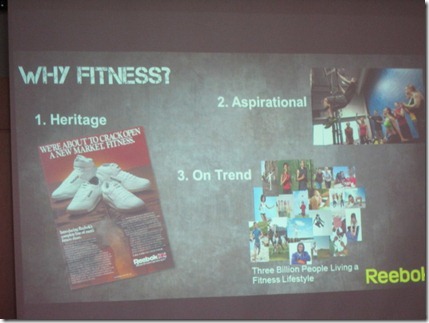 They made reference to the time when Reebok was the pinnacle of women’s fitness during the decade when step aerobics was popular and everyone wore the solid white Reebok sneakers. They seem to want to return to being viewed as the primary brand for “Fitness,” which inspired their partnership with CrossFit.

If you’re unfamiliar with CrossFit, the workouts are, according to CrossFit, “constantly varied, high intensity, functional movement,” and are typically fairly short, frequently lasting 20 minutes or less. But the beauty of CrossFit, as it was explained to us, is that it’s scalable to any fitness level.

Reebok and CrossFit joined forces in January and the popularity of CrossFit only took off further than it already had, with more and more CrossFit gyms, called “boxes,” popping up everywhere.

We were told ahead of time that we were going to try a CrossFit workout at the CrossFit One facility on the Reebok headquarters campus and I was beyond excited. 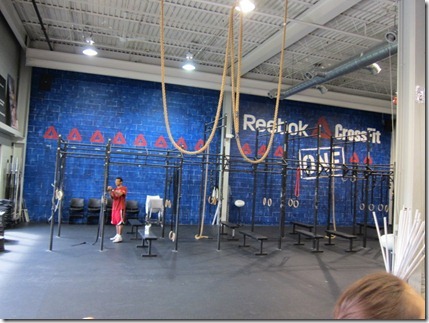 I’ve read a lot about CrossFit and heard a lot about it from friends who are absolutely enamored with it, so I knew to expect a workout that would kick my booty. I was actually a little nervous about the workout but pretty pumped to finally try something I’ve heard so much about throughout the past several months.

Before we were allowed to begin our workout, two CrossFit instructors from Reebok took ample time to teach us the correct form and make sure we knew how to do everything safely before attempting anything ourselves. 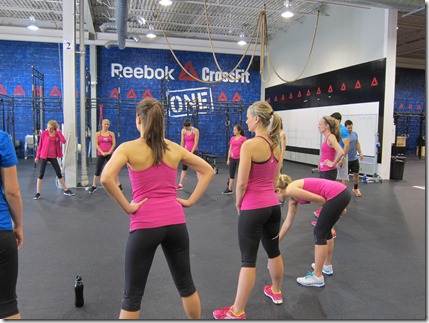 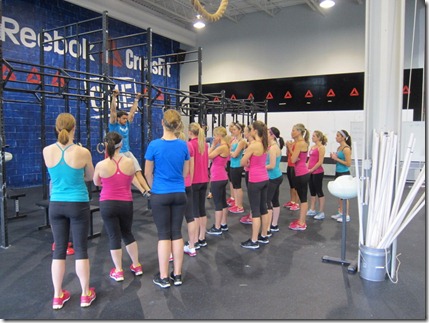 We learned how to properly complete bodyweight squats, kettlebell swings and pull-ups using a band for assistance thanks to coaching from Austin Malleolo, a CrossFit coach and superstar CrossFit athlete. (He placed 6th in the CrossFit Games in 2010!) 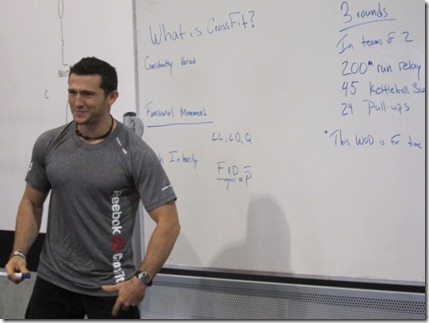 And then it was time for the workout!

In teams of two, we were told to complete the following:

Courtney and I teamed up which made me happy since we were both CrossFit newbies and weren’t sure what to expect. I knew that we’d support each other and just have fun with it and we definitely did. 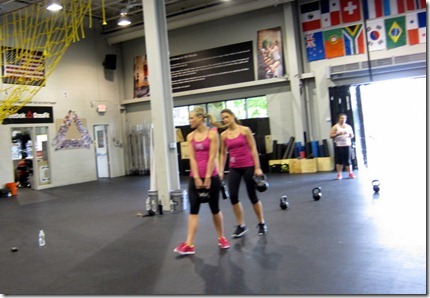 And you’ll never guess what happened… 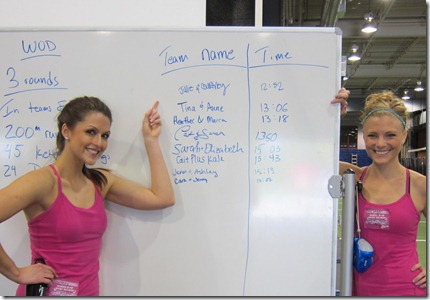 Somehow we ended up finishing the workout first! (Major props to Anne and Tina who were second but used a heavier kettlebell than the one recommended since Tina is a CrossFit pro!)

I cannot tell you how much fun I had during the workout. I felt like a kid at recess (or Field Day – did you guys have that?) and loved cheering for Courtney and pushing myself harder than I would if I were working out on my own.

I was also VERY surprised to find myself feeling slightly competitive. When Courtney and I started we had absolutely no expectations for ourselves, but once I set out on the second round of 200 meter sprints and realized we actually were doing okay, I found myself wanting to do really well and kicked it into gear.

The fact that any sort of competitive drive came out in me was a shocker because I was literally the girl who asked her track coach in junior high if I could just practice with the team and not compete because I hated competition so much and just liked the team atmosphere and workouts.

I can see why people love CrossFit for numerous reasons, including the community and the desire to push yourself out of your comfort zone. 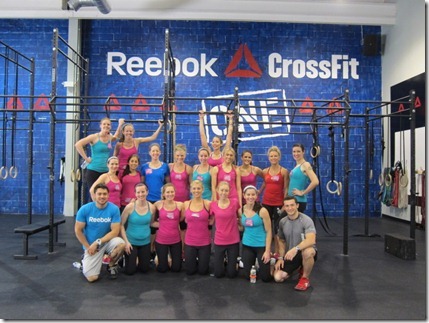 I texted Ryan immediately after the workout saying how much I loved it and now he’s anxious to go. I think he would absolutely thrive in a CrossFit environment because he loves athletic challenges.I think there are a handful of CrossFit boxes in Ocala, so I’m hoping to check one out soon.

I’ll be back in a bit with part two of this recap!