Navigation
This blog post is a reader request I received from quite a few of you in the comments section of yesterday’s blog post! Since we’re fresh off one heck of a long road trip (we drove four to six hours nearly every day for five days in a row), I figured I should type this one up while our experience road trippin’ with a baby is fresh in my mind. Here are some road trip tips for traveling with a baby. 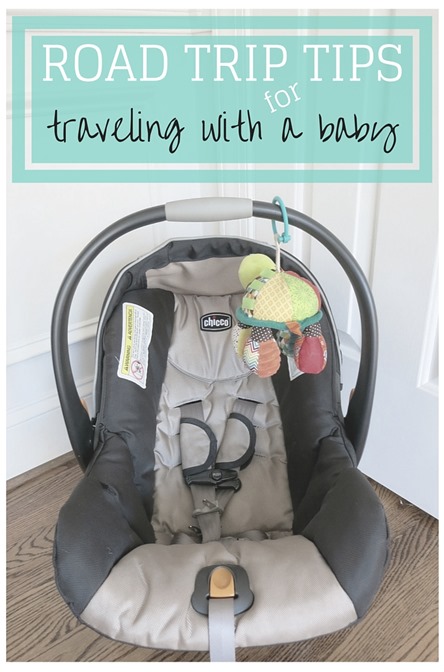 I hope these tips help those of you who may be new at this whole parenting thing (like me!) and, as always, I’d absolutely love for those with more experience to weigh in and share their go-to tips for easier travel in the comments section of this post. Some of the tips you see below that we implemented came from you guys already!

Road Trip Tips For Traveling With A Baby 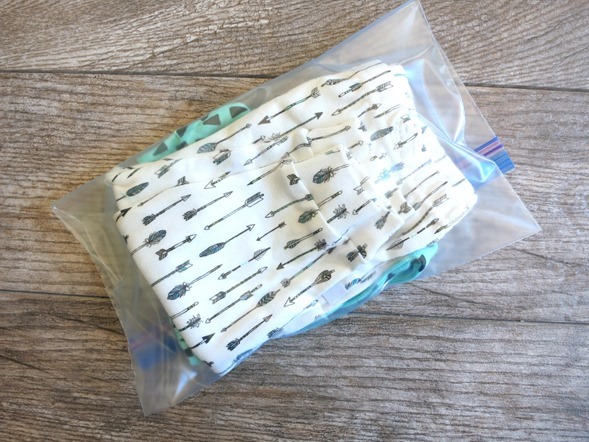 This is my number one tip! There is something about the angle of a baby’s booty in a car seat that seems to be perfect for blowouts. If a baby poops in a car seat, I am convinced it will find a way to explode out every side of a diaper and cause quite a mess. That’s where the spare onesie in a Ziploc bag comes in handy! You can easily strip the soiled clothes off your little one and toss them into the Ziploc bag so poopy clothes are now sealed off away from everything else. A fresh onesie is also easily accessible to you so you’re not left rummaging through duffle bags or suitcases during a time when your baby is covered in poop! We relied on this tip twice during our travels to Florida and I was very grateful for the ability to quickly change Chase and keep his dirty clothes away from everything else until we were able to wash them. 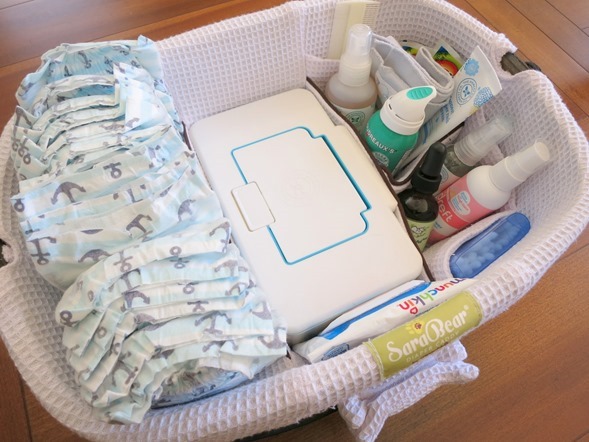 You can definitely pack your diaper bag but I honestly felt like bringing Chase’s diaper caddy along and having it easily accessible in the backseat made everything a little easier for us. When we wanted to change his diaper, we had everything we needed at our fingertips and didn’t have to dig through his diaper bag to find anything. This definitely isn’t necessary, but it was really nice to have Chase’s diaper caddy with us during our trip for all of his diaper changes as well. 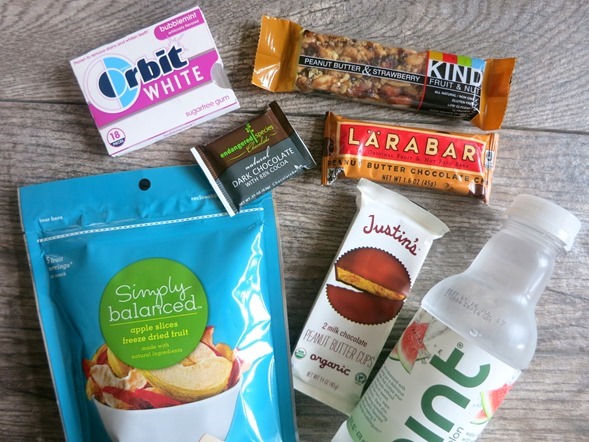 This is another BIG one for me! If your baby is anything like Chase, they tend to sleep much better when the car is moving and will immediately wake up the minute the car slows or stops. This means that if the baby is sleeping and you happen to be hungry, the thought of stopping for food becomes risky. Do you chance waking up your little one to quell your hunger? (The answer for us is a big NO because a sleeping baby during a 6-hour road trip is something you do NOT want to mess up!) Having a bunch of snacks on hand to tide us over between meals was important for us so we could keep stops to a minimum, especially when Chase was sleeping. Trail mix, turkey jerky, dried or fresh fruit and nut butter packets are very portable and work well!

As little ones get bigger, I’ve also heard moms swear by packing snacks for their children to distract them in the car as well, but we aren’t at that point with Chase just yet.

We were not able to do this on Wednesday night on our way to Jacksonville and it made the drive a little painful, but for the other drives ahead of us to Sarasota and Clearwater and back to Jacksonville and Charlotte, we timed our departure with Chase’s naptime and everything went much smoother. Playing with Chase and tiring him out before loading him in the car worked really well for us, since he was already sleepy and ready for a nap. For the most part, this allowed him to rest and sleep for 90 minutes to two hours which was phenomenal!

Back in October, when we drove to the mountains with a three-month-old baby, I sat next to Chase the whole time. Now, at nearly eight months old, Chase is much better about chillin’ in his car seat without the need for company but when we drove four to six hours almost every day for five days in a row, Chase definitely needed a playmate to entertain him. I flip-flopped back and forth between riding shotgun and riding next to Chase. Sometimes just having me next to him helped calm his fussiness, though I would typically need to engage him with silly faces, songs, toys, etc. to keep him happy during some of the longer stretches.

I packed a bunch of toys to entertain Chase during our drive to Florida and found that when I gave him one toy at a time, he seemed to do best. At first, I loaded him up with three toys, thinking the more toys he had, the more entertained he would be, but found that swapping out a toy when he got fussy for a new toy seemed to help prolong his entertainment. I tried saving the light up/electronic toys for when he was starting to go downhill and needed us to pull out the big guns when it came to baby entertainment! The toys that worked best at entertaining Chase during our road trip were the Baby Einstein Take Along Tunes Toy, Sesame Street Silly Sounds Remote (my mother-in-law gave this to us while we were in Sarasota and it was an instant hit!), the Oball and the Taggies Soft Monkey stuffed animal.

Having a baby means you’ll be stopping more than you did before. As someone who likes to push through on road trips and stop at little as possible, I tried to adjust my expectations going into our long drives. On one of our four-hour drives we lucked out and only needed to stop once, but be prepared to stop for a myriad of reasons. We stopped to feed Chase. We stopped to change a poopy diaper. We stopped because Chase clearly needed to stretch his legs and just be out of his car seat for a little while. For the most part, we tried to do as much as possible during a stop (feeding/changing/fresh air and playtime outside) and knowing a drive that used to take you six hours might take more like seven hours just seems to be the way it goes with a little one sometimes!

Also, if you can break up SUPER long distances and stay overnight somewhere in between the long drives, I think this might make the drive a little less daunting. We choose to break up what would’ve been an eleven (plus)-hour drive to Sarasota into two drives by staying one night in Jacksonville which was less intimidating. 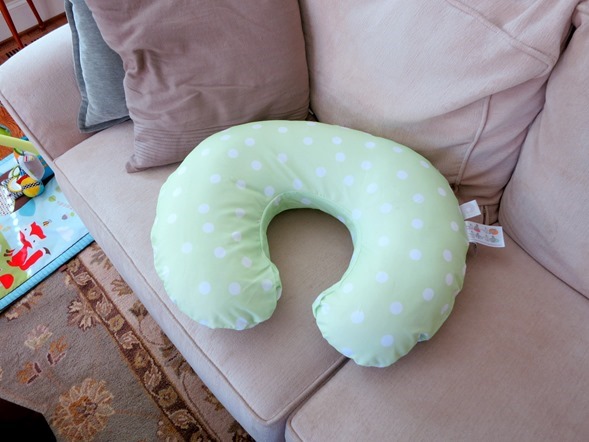 I am still nursing Chase so I wore nursing-friendly clothes and we pulled over and I fed him whenever he needed to eat while we were driving. I packed my Boppy pillow to make things more comfortable and would just feed him in the backseat whenever we stopped. I even nursed him in his car seat when we pulled off for a bathroom break at a rest stop one time when he just needed a little “snack” to drift back to sleep and we didn’t want to take him out of his car seat and get him all excited and awake again. (I leaned over his car seat when we were parked which was all kinds of awkward. Hey, whatever works, right!?) 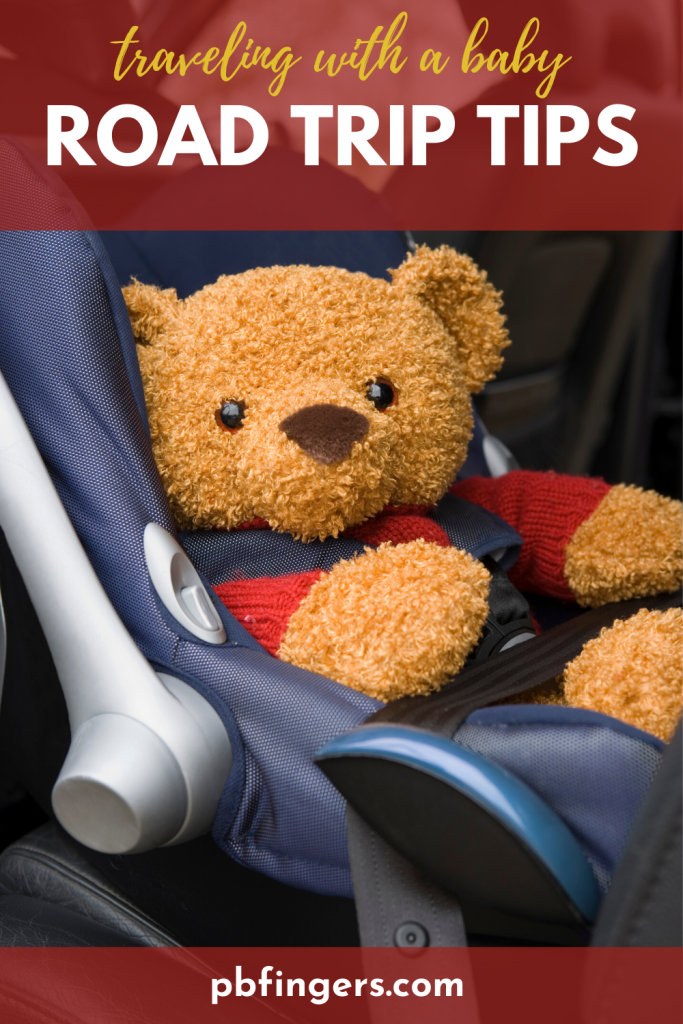