Navigation
We have just over one month until Ryder turns one year old. I’m going to go ahead and embrace the cliché and say that time with our baby boy is flying. Something happened almost exactly on the day Ryder turned 10 months old when I held our toothy 19-pound baby in my arms and realized just how limited the number of “baby days” we have left with Ryder are before he’s a walking, talking toddler. 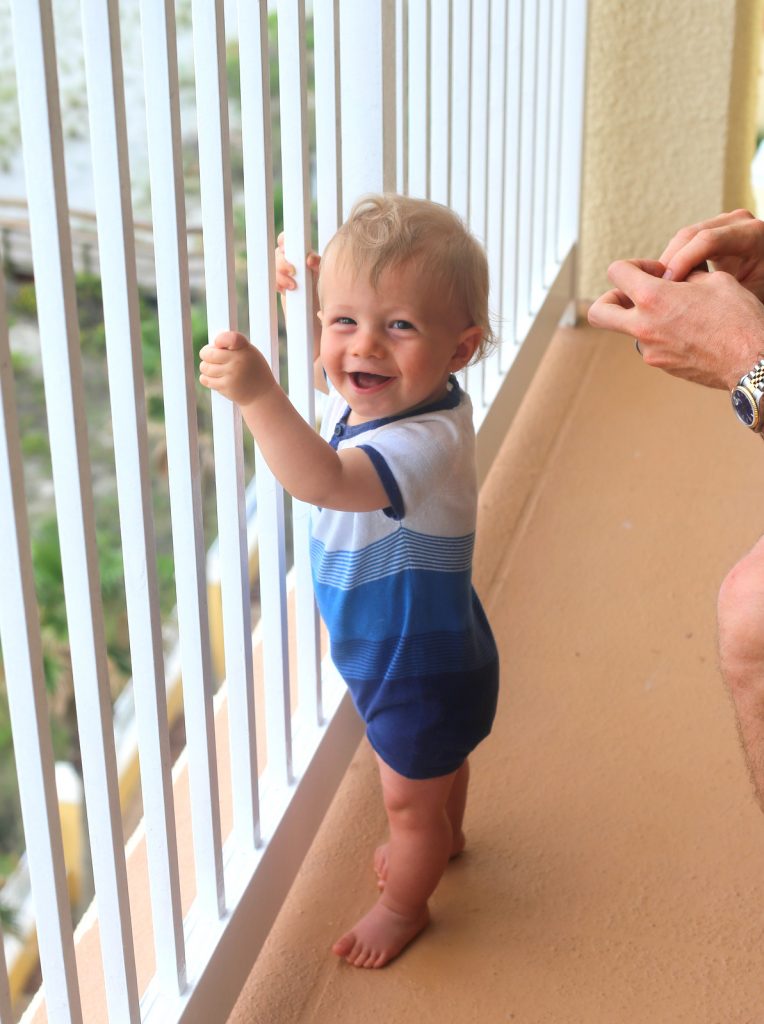 Time needs to slow down because I’m not sure I’m ready to think of Ryder as anything other than “Baby Ryder” at this point. Ryder, on the other hand, seems more than ready to enter into toddlerhood. He’s crawling around everywhere and loves exploring new places. He’s fully embracing his new mobility and independence. He loves pulling himself up to get the best views and then crying because he’s not sure how to slowly lower himself down without a big plop just yet. 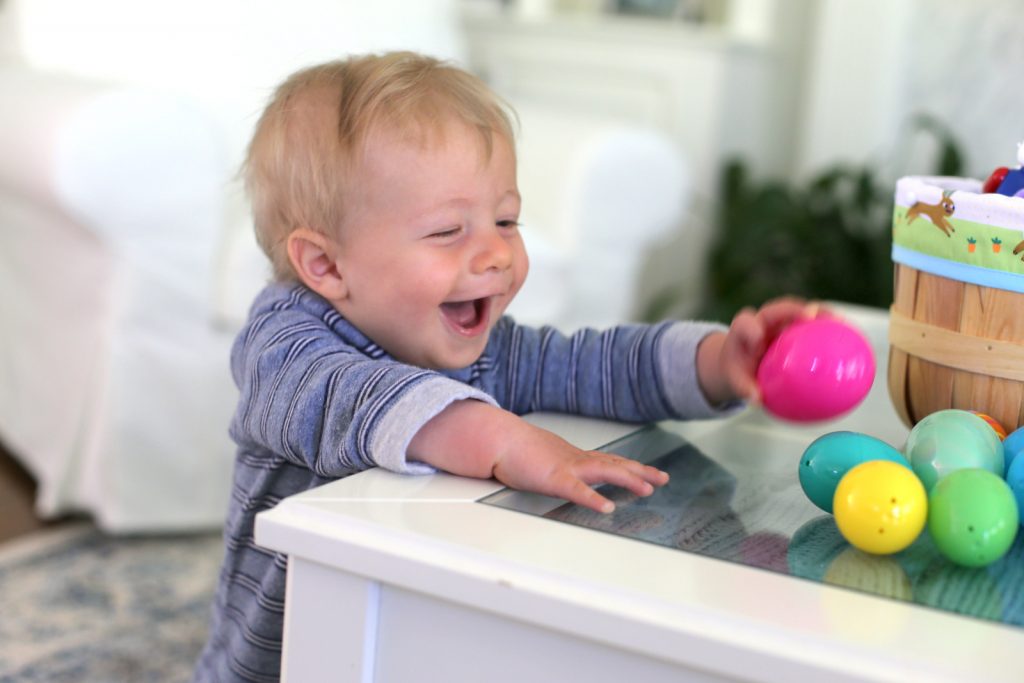 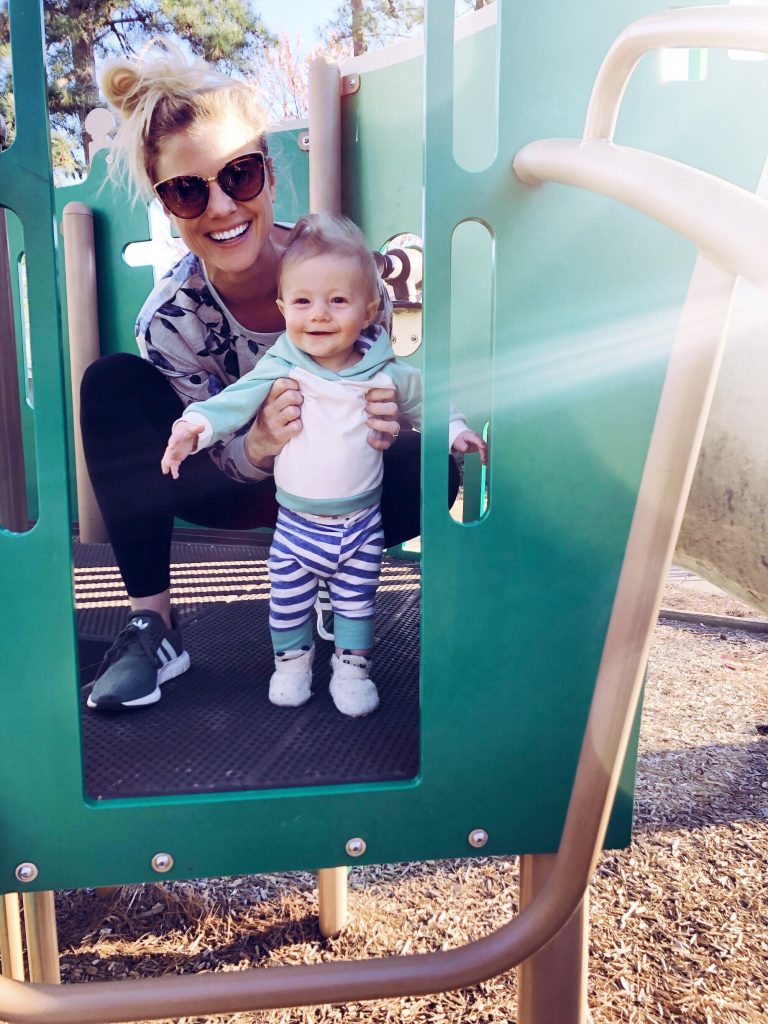 He’s fascinated by anything and everything, especially his big brother. Ryder’s new found mobility thrust us into the stage of brother battles and I find myself talking about the importance of sharing and trying to select a toy for Ryder that Chase doesn’t care about approximately 100 times a day. Thankfully Ryder seems to be a rough ‘n’ tumble little dude and smiles and laughs during most playtime with his brother but when things go south, they go south fast and he needs Mom Love STAT.  Either that or a new toy. Whatever works!

I call Ryder my little “angel baby” for a myriad of reasons, most notably because he truly feels like a gift from God in my life but also because he’s such a sweet, happy and content little guy. I hope and pray every day his easygoing and joyful demeanor lasts him his whole life. I’ve said it before and I’ll say it again, but something about this kid calms me down and serves as a point of peace in my life which is such a bizarre thing to say about a baby, but it’s simply the truth. 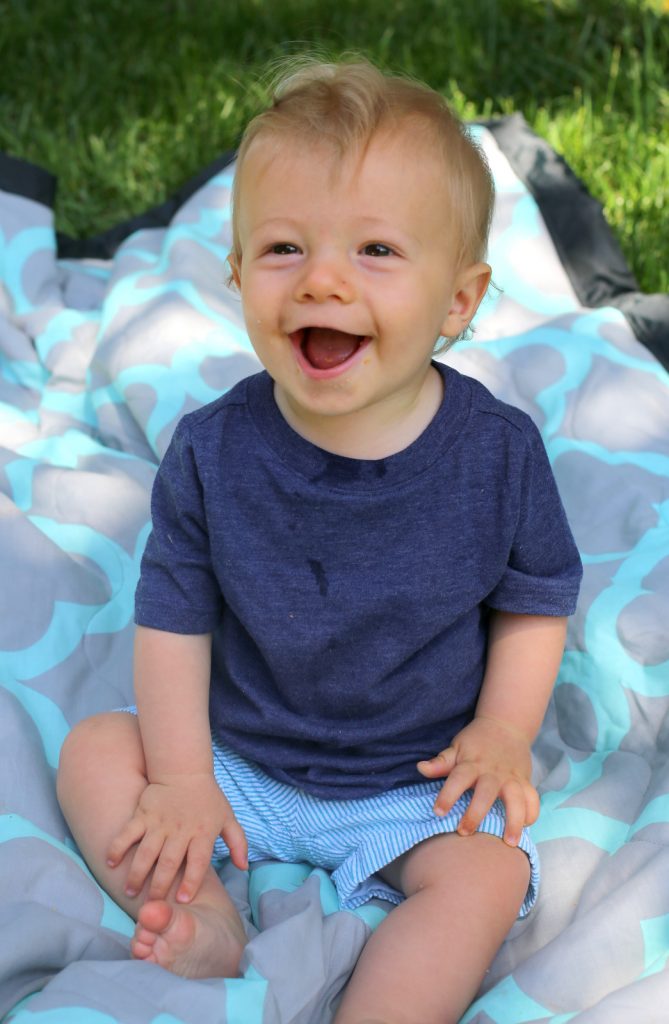 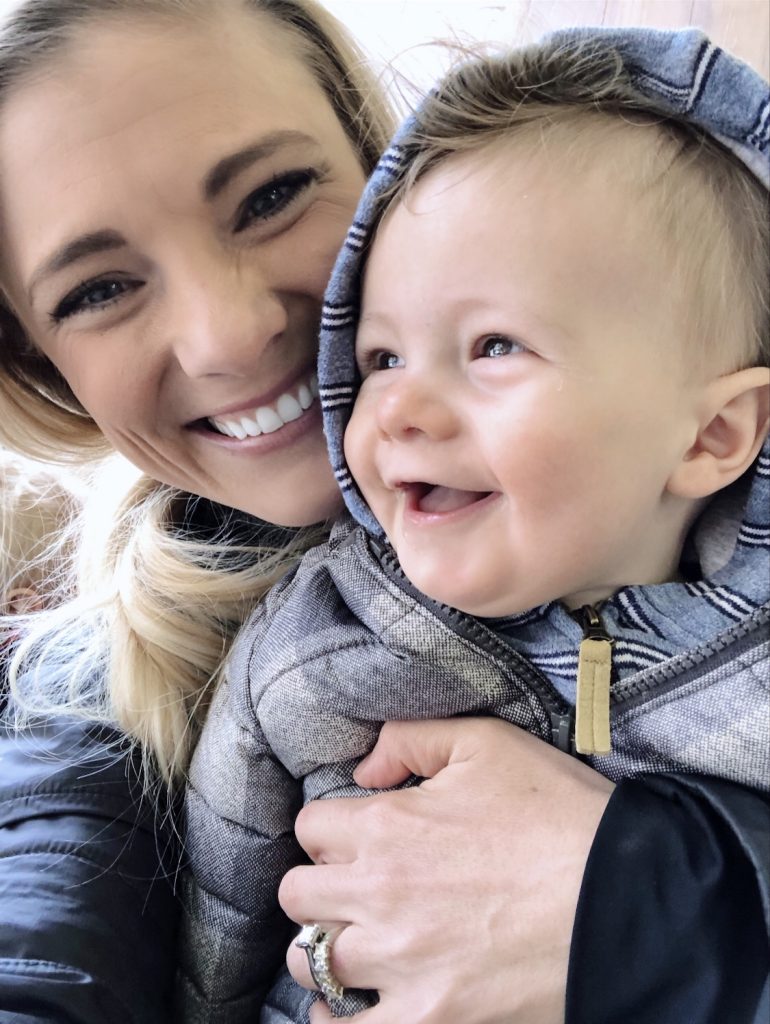 Babies and children have a way of forcing you to slow down and soak up moments because there’s simply no rushing a nursing baby and no way to resist a baby who needs love and cuddles from Mom. A baby puts everything else on pause which can take some adjusting but when I remind myself that nothing matters more than the very thing I’m pausing everything else for, I’m able to be present in a way that brings me the ultimate joy.

Chase and Ryder are my ultimate joy not only for the way they make my heart ache with love but for the way they act out joy through high-pitched squeals, racing cars down the car tower track that takes up entirely too much room in our house or simply smiling with their whole bodies. 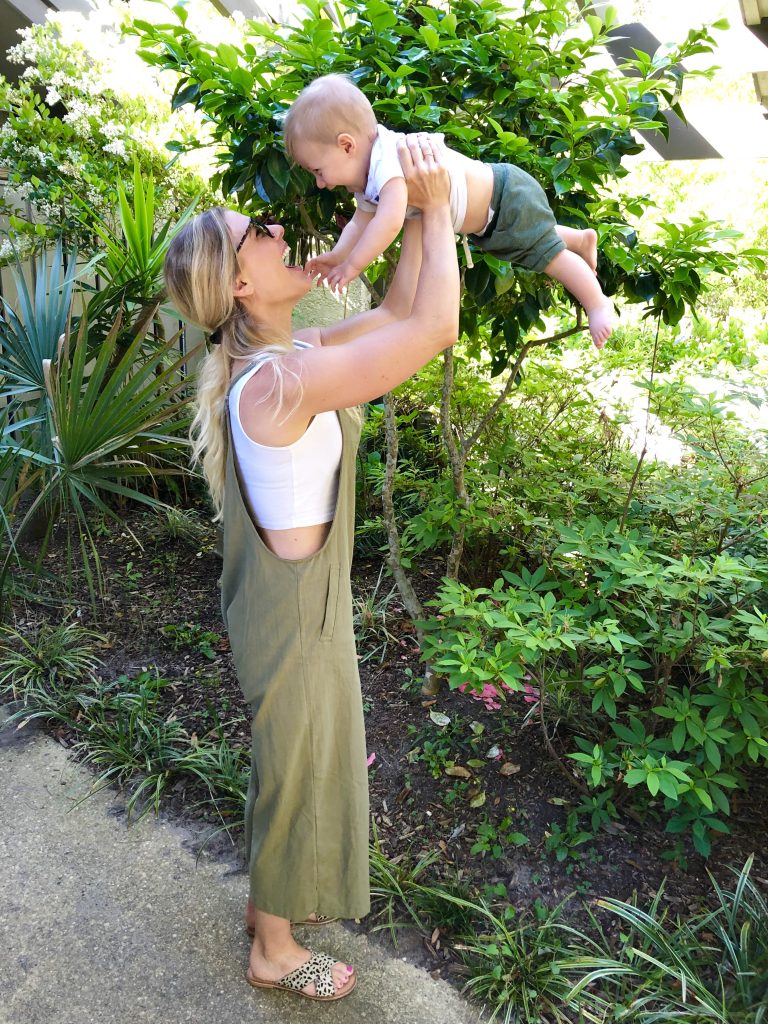 Like his big brother, Ryder is a social little guy. He babbles up a storm and loves practicing his tongue clicks, claps, head shakes (he shakes his head “no” for just about everything) and the enthusiastic whole-body bounce and hand waves he does whenever we say, “Yaaaay!” Ryder is also incredibly observant. He loves watching Sadie run and his big brother play and can usually be found crawling as fast as he can after them. It’s clear he already has a strong desire to be included in the fun!

I feel incredibly lucky because we’re in a really good place with sleep. I count my blessings every day for that one because I know how hard it is to have a kid who isn’t naturally a good sleeper. Ryder’s been consistently sleeping through the night since he was right around 6 months old and we implemented the Gentle Cry It Out sleep training method. Occasionally he’ll wake up in the middle of the night but there’s usually a reason (travel, teething, etc.) and it often takes us only a night or two to get back on track with decent sleep. 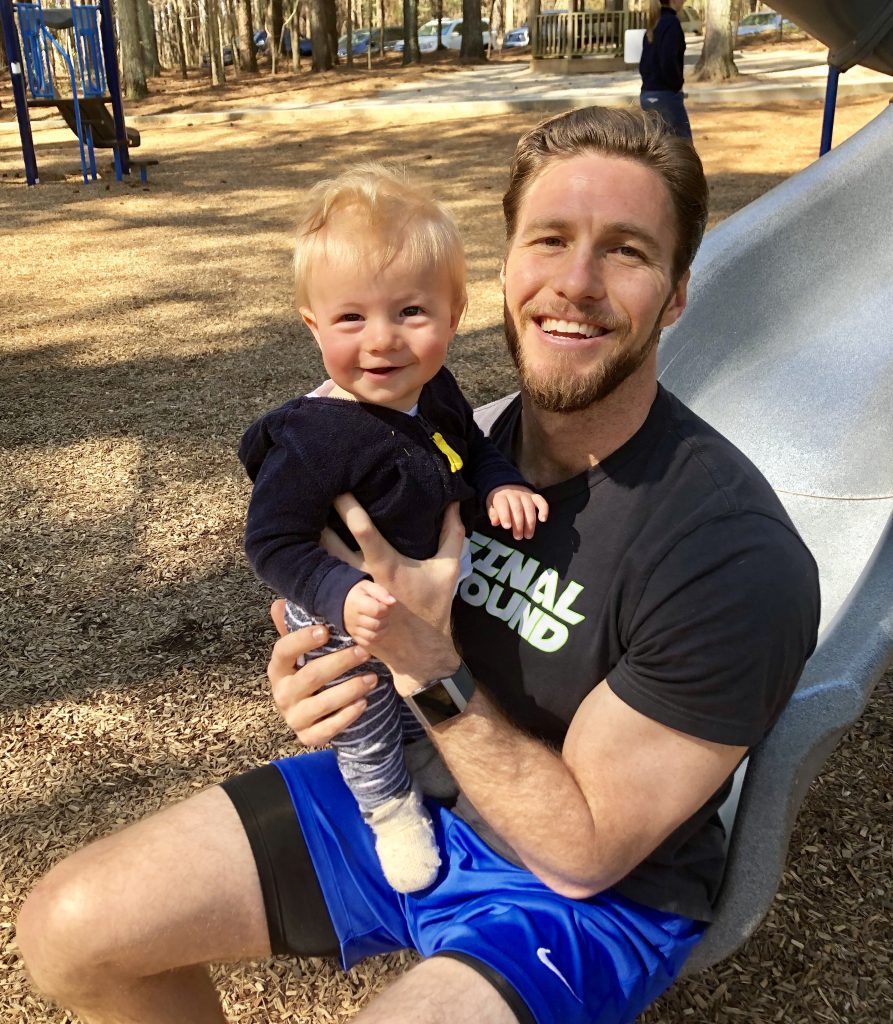 As far as naps are concerned, on one hand I’m kind of shocked I don’t have more of a steadfast schedule going for Ryder, but on the other hand, what did I really think would happen with a second child? With another kid’s activities to work around, Ryder’s nap times are rather flexible but thankfully that seems to work for him. Ryder takes his best nap in the morning and it’s right around two hours. He’ll go down for a nap anytime between 9:30 a.m. and 10:30 a.m. (depending largely on when he wakes up in the morning) and then his afternoon nap is usually around 2:30 p.m. While I can generally count on a solid two hour nap from Ryder in the mornings, the duration of his afternoon naps are all over the place! 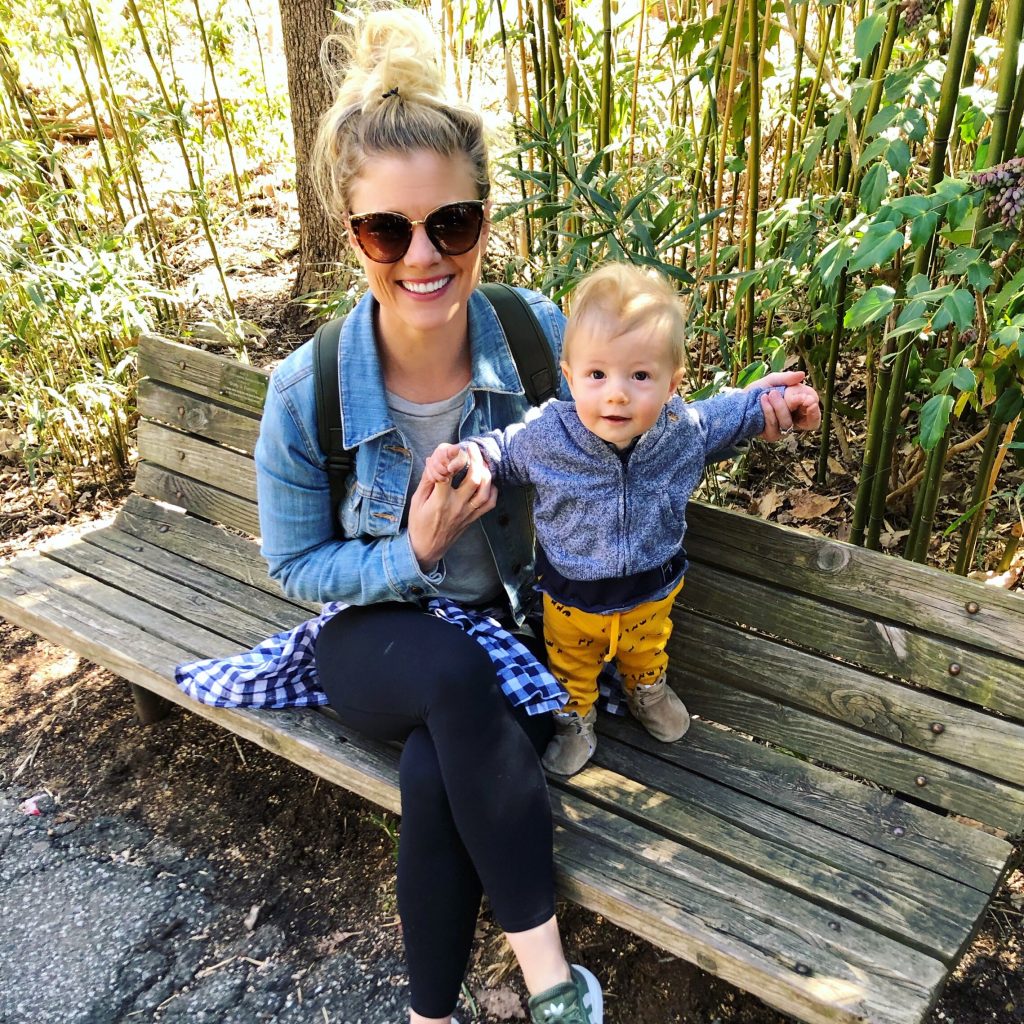 I truly hate to compare babies but I think it’s only natural that it happens sometimes as a second-time mom. The experience you have with your first child is so ingrained in your mind and you cannot help but expect your second child to be exactly the same so it blows your mind a bit when they’re so incredibly different. 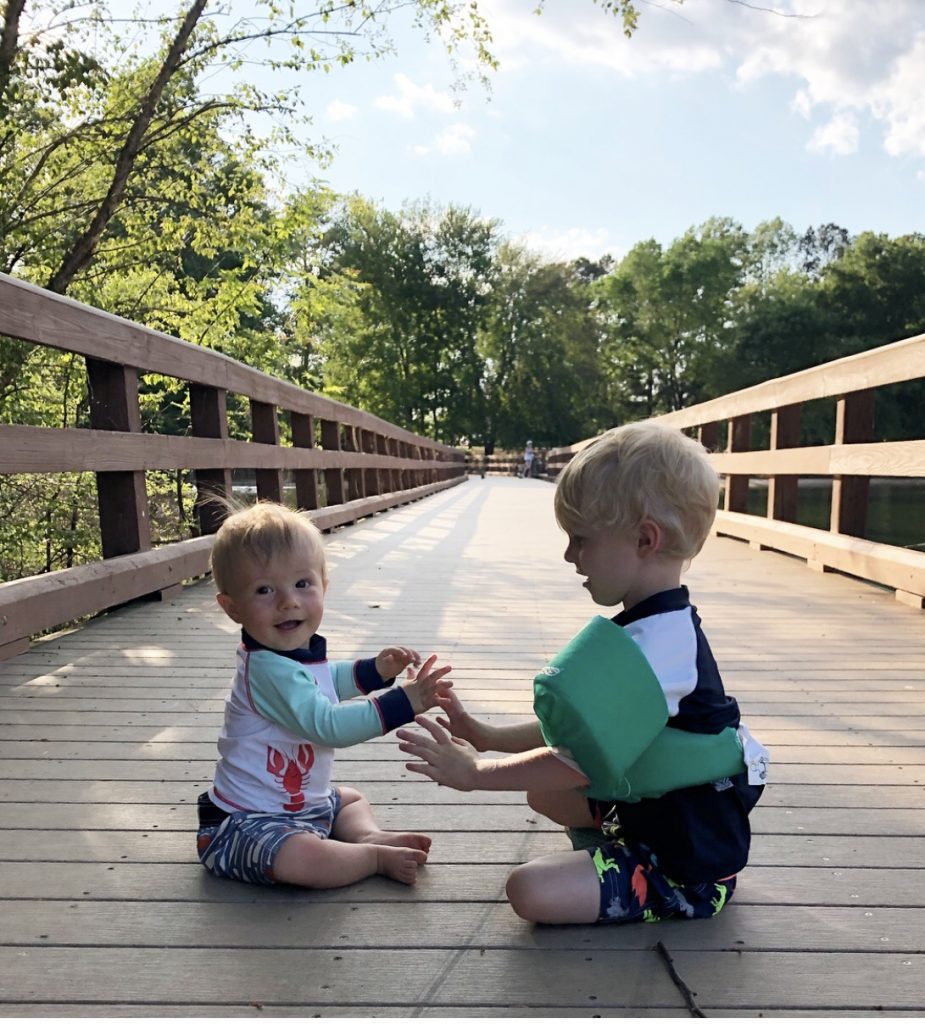 I fully expected to have another child who could not care less about food on my hands and was ready for all of the stress that comes along with trying to feed a baby with little to no interest in eating. To say Ryan and I are shocked by how well Ryder eats on an almost daily basis is a serious understatement. Having a baby who shows genuine interest and enthusiasm around food is a serious gift in my eyes. To be completely honest, watching Ryder shovel bites of chickpea burger into his mouth and suck down a pouch of baby food in 2.5 seconds is a giant relief and makes meal time waaay less stressful. For those who are navigating solids with a baby whose interest in food is practically non-existent, I feel for you. I must add that we’ve done absolutely nothing different with Ryder than we did with Chase and he’s just naturally a lot more interested in eating. All kids are so different and I know it’s easier said than done, but please don’t beat yourself up whenever you see someone’s baby gobbling up food and your little one would live off breastmilk or formula for all the days if they could. I get that feeling times a thousand so part of me hates to talk about how well Ryder is eating because I know someone out there is reading this and feeling stressed about how their kid is eating. If having a second child has taught me anything, it’s that babies truly are SO different and comparing babies is not helpful in the least. Ryan and I both say that Ryder is a very grabby baby both during playtime and meal time but never is it more prevalent than when you’re holding him and trying to eat something that Ryder then decides he wants. The food very quickly becomes his obsession! Ryder is game to try pretty much any food we put on his plate and his favorites continue to surprise me. Right now he’s loving Thai chickpea burgers, roasted broccoli, lentils (not plain but prepared in a recipe of some sort), Bolognese sauce, smashed blueberries, peanut butter, pretty much any baby food pouch that has at least one fruit in it (have YOU tried the all-veggie pouches? Bleh!), frozen banana (we give it to him in a mesh food feeder and he LOVES it), apples, pancakes and Cheerios.

Aside from eating solids, I am exclusively breastfeeding and typically nurse Ryder four(ish) times a day. His best feeding is his first feeding in the morning and aside from our morning feeding session, most of my nursing sessions are an acrobatic endeavor!

Ryder is thankfully an efficient eater but he also loves to multitask when he nurses so breastfeeding looks like a whole lot of face grabbing, body bending, wiggling, hand exploring, playing and baby babble! Sometimes he seems content to eat for two minutes in the middle of the day and then just wiggle around and play and grab my face. When this happens, I roll with the punches and let him skip a mid-day nursing session in favor of eating more real food/solids which I think is part of the natural weaning process. (When I say I “let him skip a nursing session” I have to laugh because there’s definitely no forcing a baby to nurse when they don’t want to!) 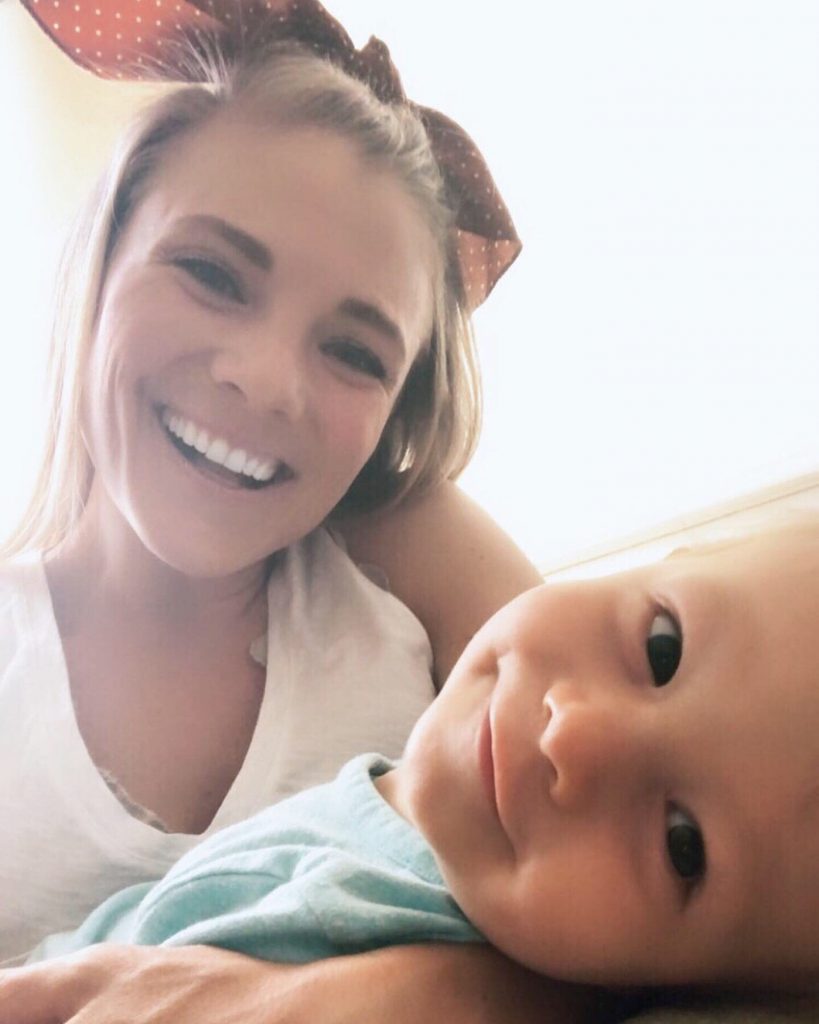 I feel very fortunate that nursing Ryder continues to go well! One thing we didn’t realize until his front teeth came in and he had a pretty big gap between them was the fact that Ryder has a slight lip tie. For some reason this makes feeding on my right breast quite painful at times (something about the way his teeth settle in — ooph!) but since it’s not affecting his nursing efficiency and isn’t too severe, both his pediatrician and pediatric dentist said not to worry about getting it clipped.

The biggest hurdle for me is and always has been my excess lipase issue and I quickly learned that my pumped breastmilk actually begins to turn within 24 hours but I haven’t been able to pinpoint the exact moment it changes over. It’s honestly all such a headache and even when I’ve followed steps to scald my milk, Ryder still doesn’t seem to want it so I am pretty much just throwing in the towel on pumped breastmilk at this point and opt to schedule my time away from Ryder around nursing sessions. It’s not ideal but I also recognize how fortunate I am to be able to be around him and nurse him. As far as when I’m planning to wean, I’m not sure! I am going to follow Ryder’s lead but will likely try to wean a bit once he turns one and eliminate middle-of-the-day feeds so we’re get him down to a morning and evening nursing session.