Is it just me or did this weekend feel like one of the last official weekends of summer? Though temperatures are in the 90s in Charlotte right now, it feels like summer is winding down, probably because all of the signs in front of our local schools are welcoming kids back and Labor Day weekend – which always feels like the real conclusion of summer – is only two short weeks away.

Though anytime spent outside this weekend resulted in lots of sweat, feeling the sun on my (overly sunscreened) skin was worth it.

Friday night felt like the celebration of nothing in particular… The end of a long week? Ryan’s return from the Keys? We felt like enjoying our fair share of treats as a family on Friday evening so we celebrated absolutely nothing with an assortment of cupcakes from a local bakery and it was lovely. 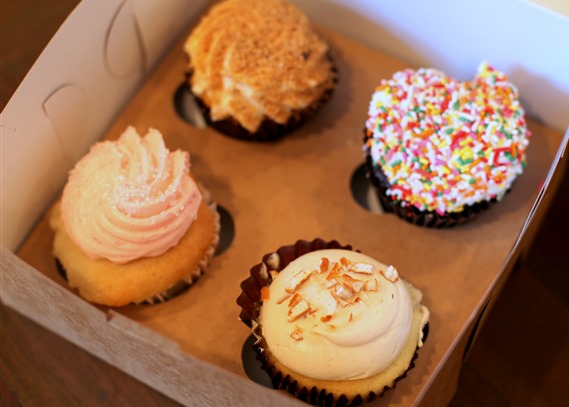 (I’ll give you one guess who chose the Sprinkle Explosion cupcake.)

I was in my pajamas by 8 p.m., curled up on the couch watching Big Brother with Ryan and a stomach full of sugar so I think it’s safe to say my Friday night was a good one.

Saturday morning kicked off early, as usual, and we were up by 6:30 a.m. Ryan headed off to the gym first while I did a little work and got Chase up and ready for the day before we flip-flopped workouts and I headed off to boot camp. 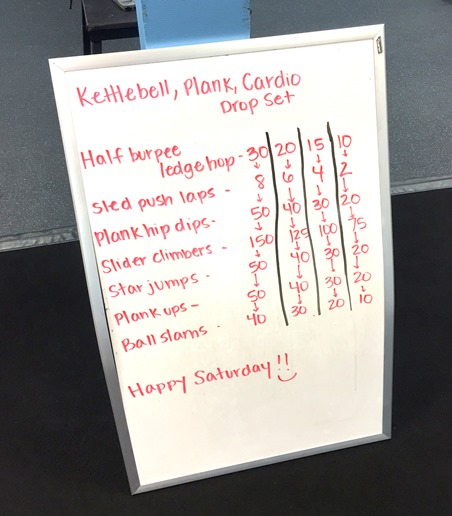 My workout was a good one and since you guys know by now that decreasing rep formats are my favorite (they always give me the best sense of accomplishment), I was all about the whiteboard workout we went through on Saturday morning.

Once I was done at the gym, I popped into the grocery store to pick up some food for a mid-day barbeque before driving home and meeting up with Ryan, Chase and Sadie for a walk around the neighborhood. 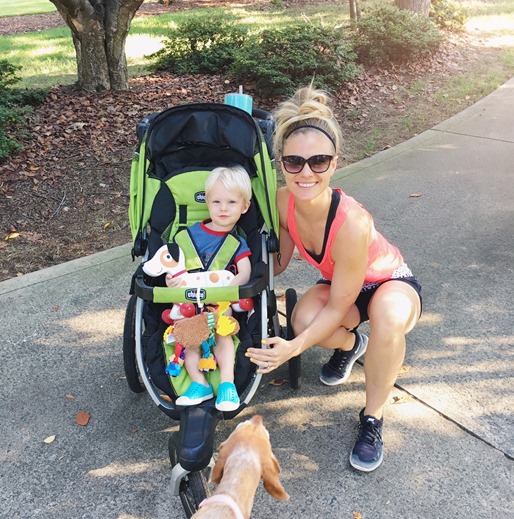 In case you were wondering, yes that is a big dog pull-along toy in Chase’s lap. It’s coming with us everywhere these days and he seems to think it’s quite cuddly, despite the fact that it is made out of wood. It’s actually beyond adorable, because Chase talks to the dog exactly the way we talk to Sadie (“Good girl!”) and pets it, feeds it, cuddles with it, etc. My heart explodes every time.

By the time we made it home, we had to hustle to get ready for the mini-cookout we had planned with our friends Ryan and Janessa who were stopping by en route to a wedding they were attending in the city Saturday evening. 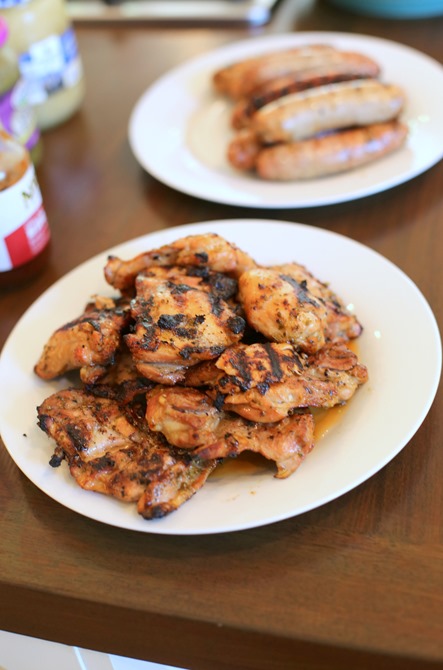 Ryan and Janessa arrived around noon and spent a little over three hours hanging out with us at home which was wonderful! It was great to catch up with them (Ryan is one of Ryan’s best friends from childhood) and hear all about their future plans since it looks like a big move is on the horizon for them soon.

Chase woke up a little bit before Ryan and Janessa left, so after we all said our goodbyes, we could tell Chase was ready for some action and decide to head off to Discovery Place Kids. 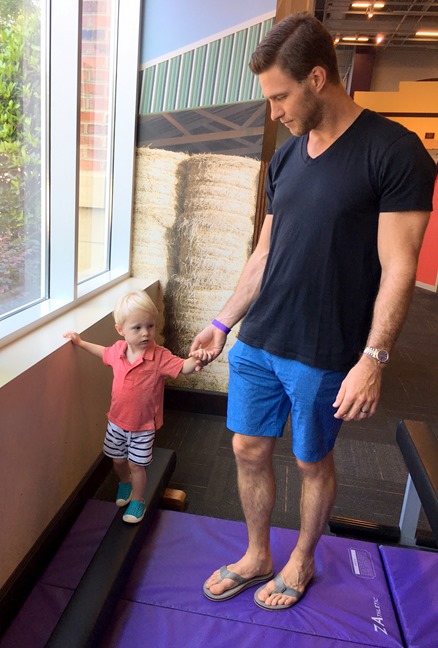 We were only there for 45 minutes or so before they closed but the timing worked well for us since we wanted to go to our church’s Saturday evening service at 5:30 p.m.

The service was a good one and emphasized the importance of cutting out a specific time each day to focus on quiet time with God. I recently purchased a new devotional to read every morning so the service made me even more excited to dive in. I did some research and the devotional seems like a good fit for me (aka someone who is still quite intimidated by simply picking up the Bible and knowing where to begin), since it provides structure and guidance for reading. I started it on Sunday morning and so far so good.

The rest of our night was uneventful but peaceful and we were in bed before 10:30 p.m. Not too shabby.

Our Sunday kicked off with a family walk around the neighborhood before the heat of the day set in. We had plans to take the boat out with our friend Ben a little before 10 a.m. and after a tasty breakfast of high protein hemp oatmeal, we were off!

Unfortunately our boat had other plans in mind and wouldn’t start. We haven’t taken it out in a while (I wasn’t supposed to swim for a few weeks following my D&C) and apparently it needed to charge longer than a few hours so we swapped our boating plans for beach plans instead! We made our way out to a nearby beach and spent the rest of the morning enjoying the sun and splashing around in the lake. 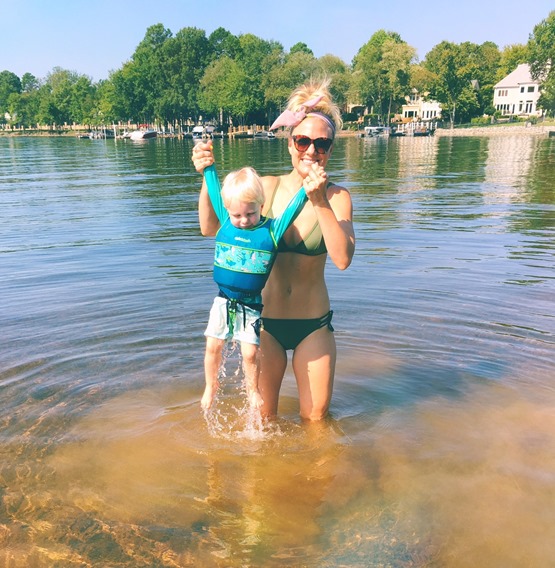 We arrived home in time for a lunch of cookout leftovers around noon and when I put Chase down for a nap, Ryan and Ben headed off to the gym together. While Chase slept, I worked on a freelance recipe project and tested two recipes, one of which was a total success so I photographed it and then sat down at the computer to spend the rest of Chase’s naptime working. Apparently Chase had other plans because he slept for less than an hour before deciding that was enough of a nap for him on Sunday.

He woke up tired and cranky (doesn’t it kill you when you know your kid just needs more sleep to feel better but they absolutely refuse?), so we cuddled up at home, read some books and laid low for a few hours until Chase’s energy level picked up and his mood improved.

Once Chase was back to his normal self, we headed out and ran a couple of errands before changing into our pajamas nice and early, throwing burgers on the grill for dinner and digging into hot apple crisp with vanilla ice cream for dessert.

And that was our weekend in a nutshell!

The week ahead should be a decent one. I’m watching my friend Lauren’s daughter today and tomorrow and I have a follow-up doctor’s appointment on Thursday before Ryan’s dad arrives in town at the end of the week! I have a feeling this week is going to fly by!

Thanks so much for checking in this morning. I hope you guys all have a great Monday and don’t forget to check out the eclipse today!