Navigation
Today kicks off what looks like five days in a row of rainy weather in Charlotte which has me feeling all the more grateful we spent almost every moment of this past weekend outside. Ryan and I both have the tan lines on our backs and shoulders to prove it and that was even after a lot of sunscreen application! Apparently there’s something to wearing sun shirts/rash guards like the boys…

When we took a peek at the weather forecast midway through last week and saw sunny skies and temperatures in the mid-80s on the horizon, we hopped for a weekend filled with boating, water fun and outside time and got our wish!

Saturday morning kicked off with blueberry banana protein pancakes followed by a short walk around the neighborhood with Sadie to a little marina to check on our turtle, fish and duck friends. Since it was nearly 80 degrees by 10 a.m., we wasted no time suiting up for a day on the boat and headed out on Lake Norman soon after we arrived back home. 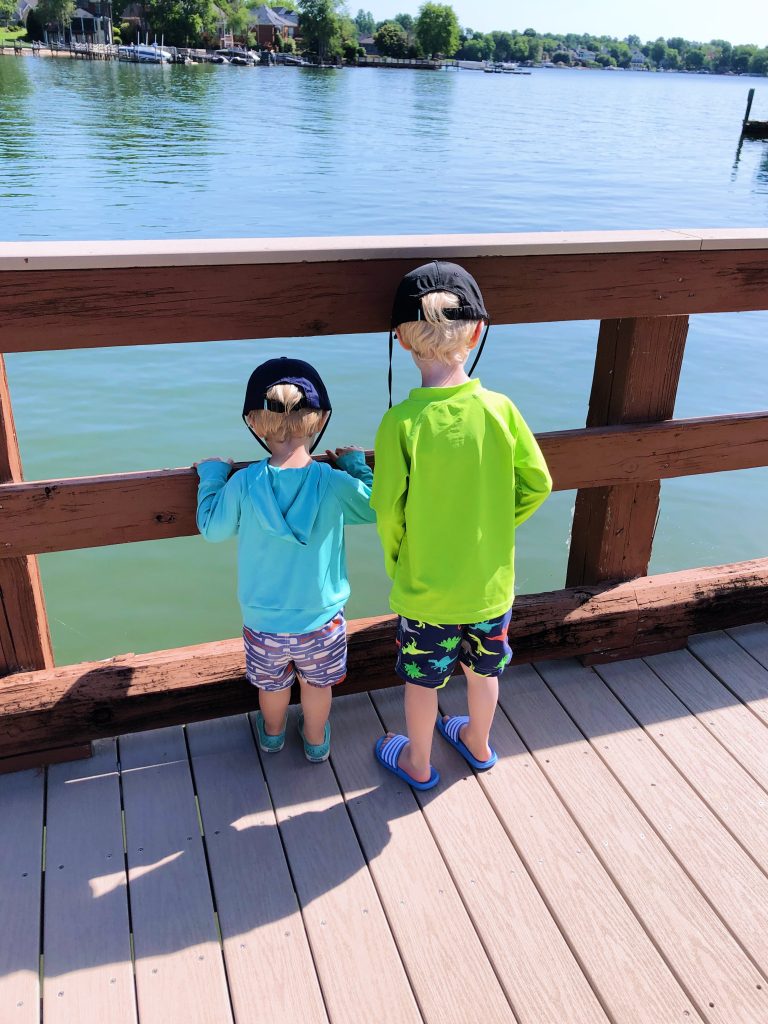 I packed lots of snacks, water, sunscreen and beach toys and Ryan took us up to a little island where we dropped anchor and splashed around for a few hours. 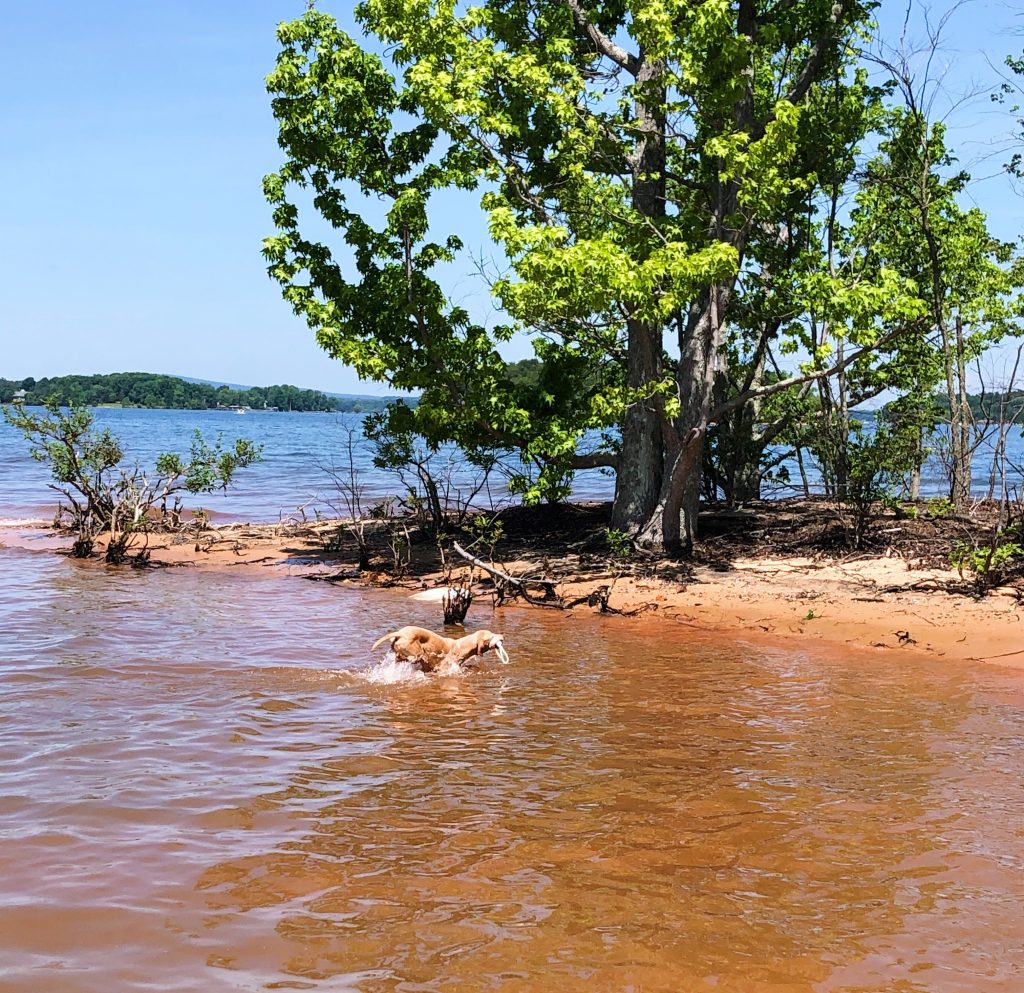 Our water dog Sadie was in heaven, of course, with a billion rounds of fetch. I need to check to see what kind of toy we use for her when it comes to playing fetch in the water because it’s her absolute favorite! It floats well, throws far and has held up for years. My mother-in-law knocked it out of the park with that gift for her granddog a while back!

The foam mat Ryan got me for my birthday proved to be the biggest hit of the weekend and Chase and Ryder had the best time running on and off that thing and using it to play all sorts of imagination games. (Chase was a turtle and Ryder was a “water squirrel” — whatever that is… ) 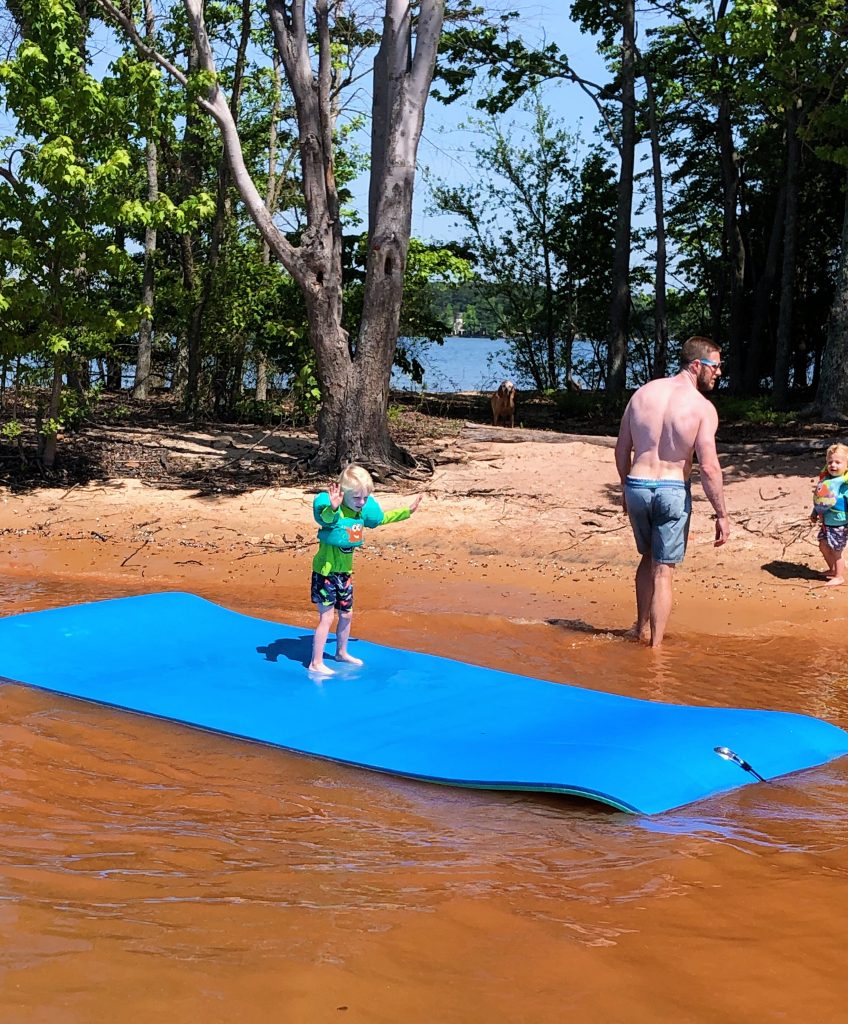 The boys’ appetites were raging after so much time on the lake so we ate the food we packed and then they snuggled up in towels for the boat ride home. 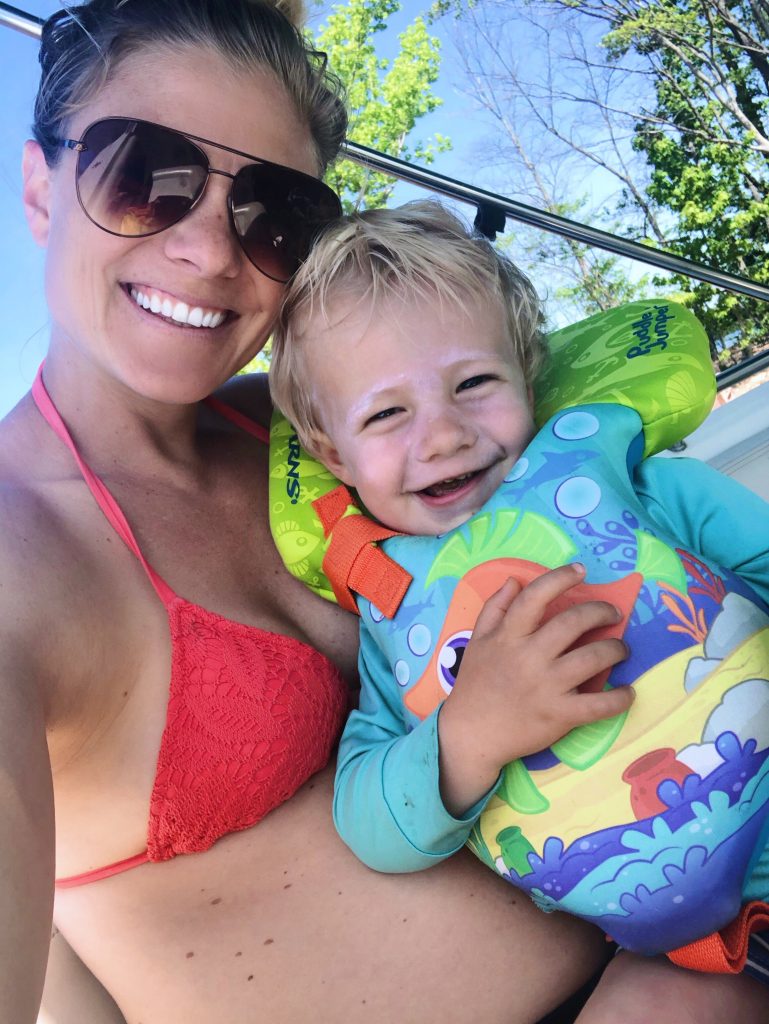 I told Ryan there’s a feeling I get when we’re on the lake that I can only describe as a peaceful sort of calm contentment that I don’t find many other places. I guess the lake is what Chubbs from Happy Gilmore would call my “Happy Place.” (I LOVED that movie so much in high school. Any other late ’90s Happy Gilmore super fans out there?)

Once we arrived home, we put Ryder down for a late afternoon nap and then I quickly wrapped a baby shower gift and headed off to a drive by driveway baby diaper sprinkle for a friend. My friend Morgan is expecting her third baby next month and it was so nice to be able to celebrate her social distancing-style by dropping off a gift under a tent in her driveway. I ended up hanging out from afar for a bit because it was just so darn nice to see a couple of friends even if it was for 6-feet-apart conversation. I’ll take it!

I arrived home to find Ryan and Chase trimming trees and bushes in the yard so I took that as an opportunity to whip up another batch of homemade ice cream and throw together all of the fixings for the taco dinner we had on the menu for the evening. 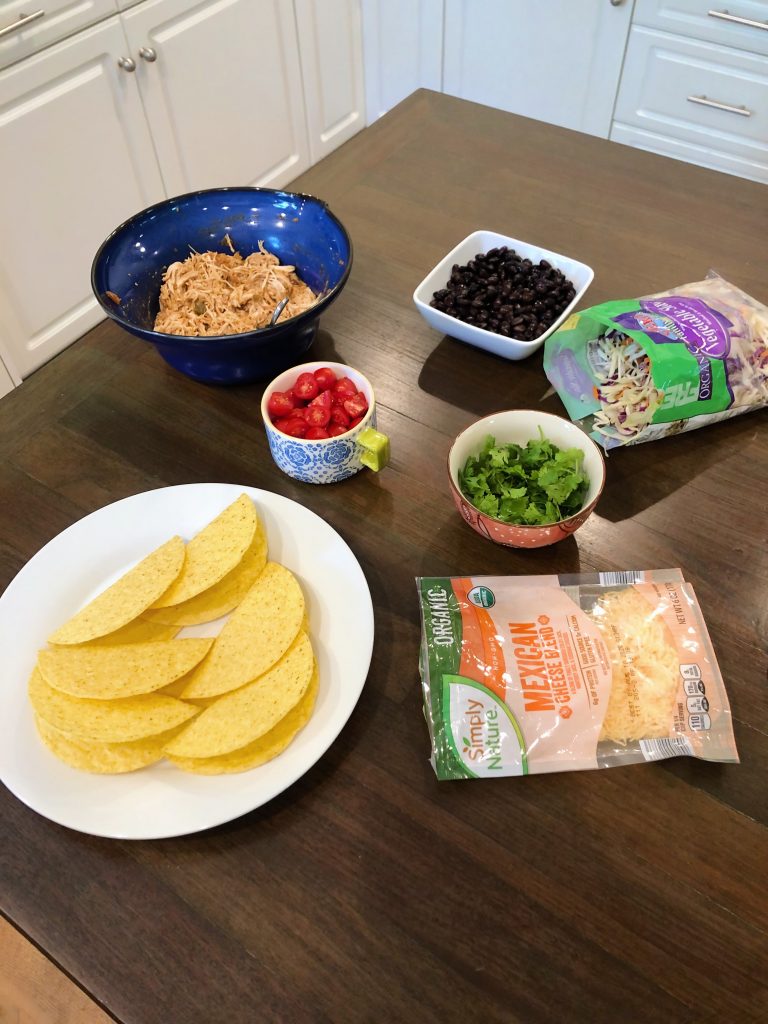 Earlier in the day, I prepped my slow cooker cilantro lime salsa chicken to serve with hard shell tacos, black beans, tomato, cilantro, vegetable slaw and cheese. I also served some unpictured cilantro rice on the side and we all loved this meal!

And there were no complaints about dessert either! 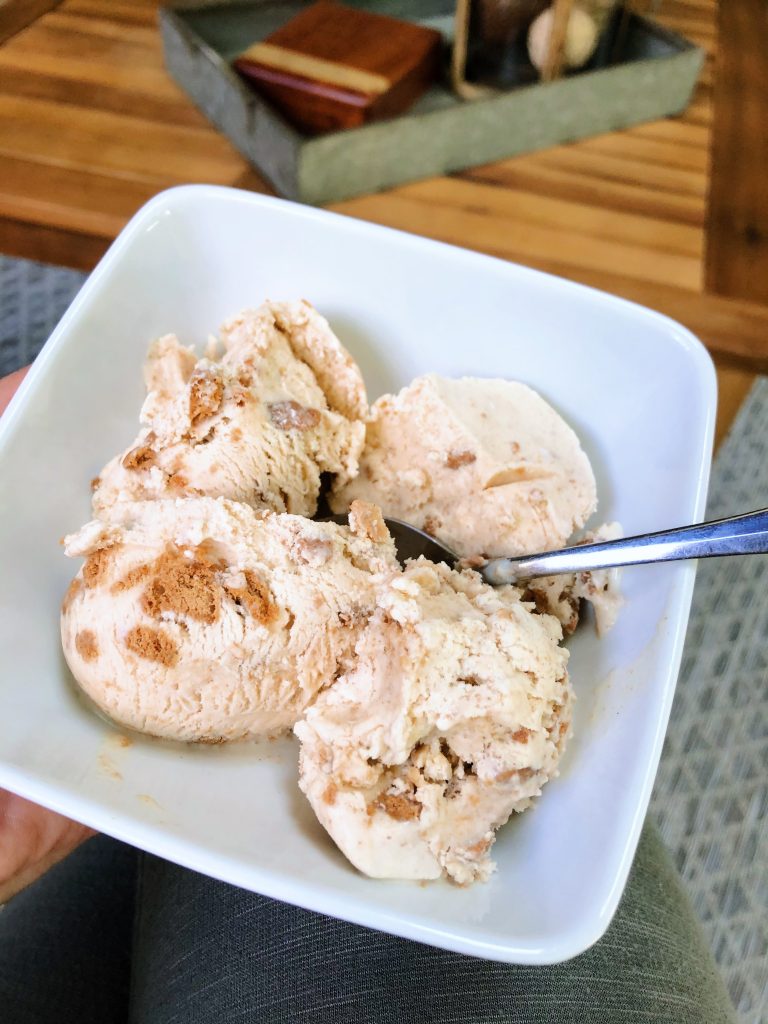 I made this batch of homemade Biscoff ice cream by following the same cinnamon ice cream base I detailed in this post and then I added almost an entire package of crushed Biscoff cookies to the ice cream maker for the last five minutes of the churn cycle. This was one of my favorite creations yet!!

Sunday looked nearly identical to Saturday and after a morning walk with Sadie we found ourselves out on the lake again. 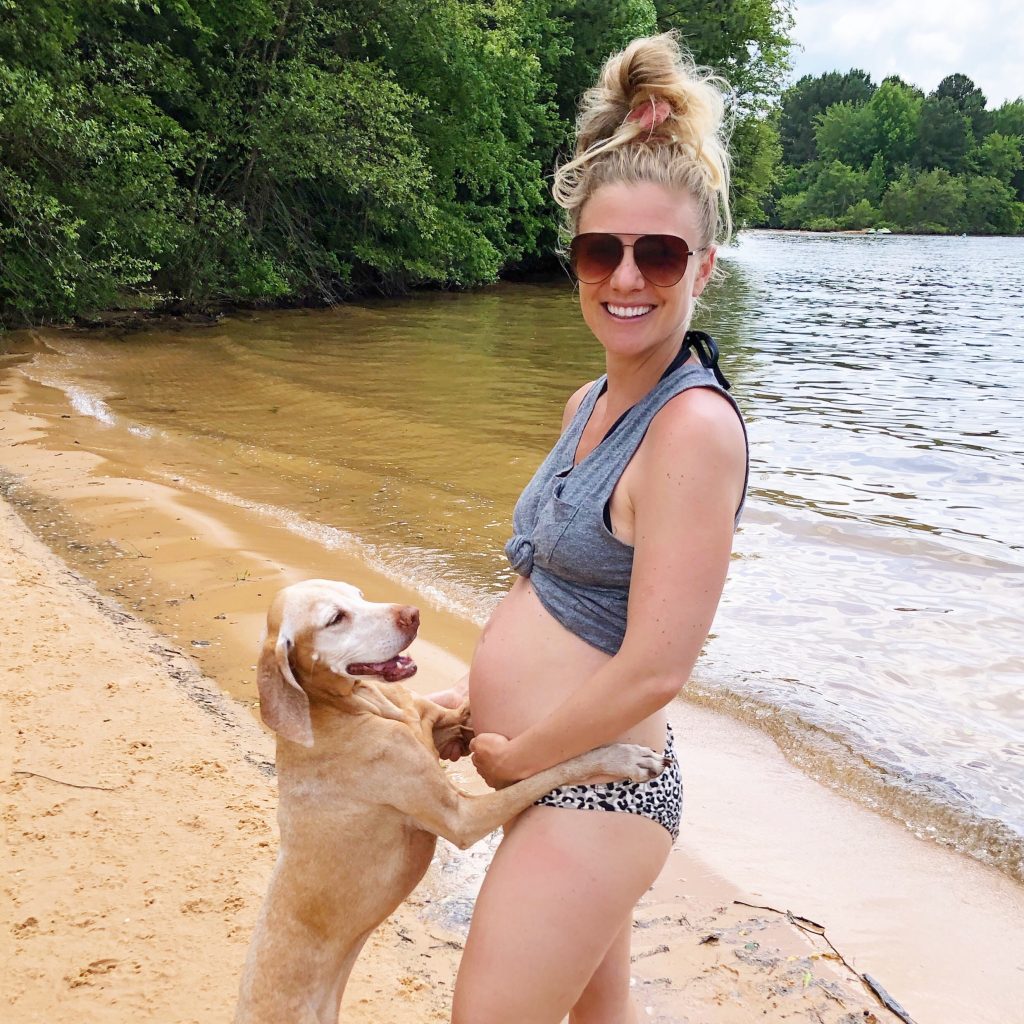 I joked that this may be the most love our littlest member of the family gets from Sadie because she isn’t exactly known to welcome a newborn into our home with lots of licks and love. Despite the fact that our boys are 100 percent obsessed with Sadie, we’re still pretty sure she wishes she was still the only child and will roll her eyes at us big time when we add another member to her wolf pack in September. Oh and just like with my pregnancies with Chase and Ryder, she’s 100 percent clueless I am pregnant again and still loves putting her butt on my belly any chance she gets.

I always think it’s adorable when you hear about dogs who “just know” when someone is pregnant and rest their sweet little heads on their dog mama’s baby bump but that definitely isn’t happening over here. Sadie prefers putting all of her weight on top of my belly and body slamming me with her excited enthusiasm to show her love.

We passed our time on the water with faux-fishing using the learning rod my aunt gave Chase a couple of years ago. 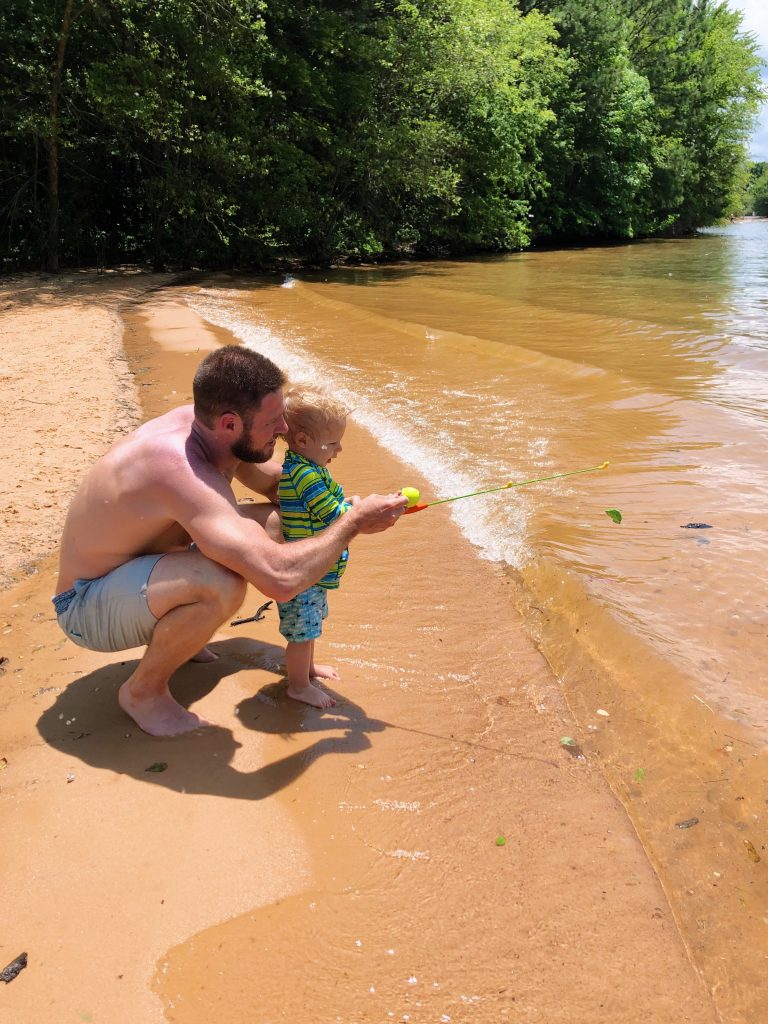 The fishing rod can be used for real fishing but we have yet to take off the weighted green fish at the end of it since the boys are all about practicing casting and pretending they catch real fish. Whatever works! 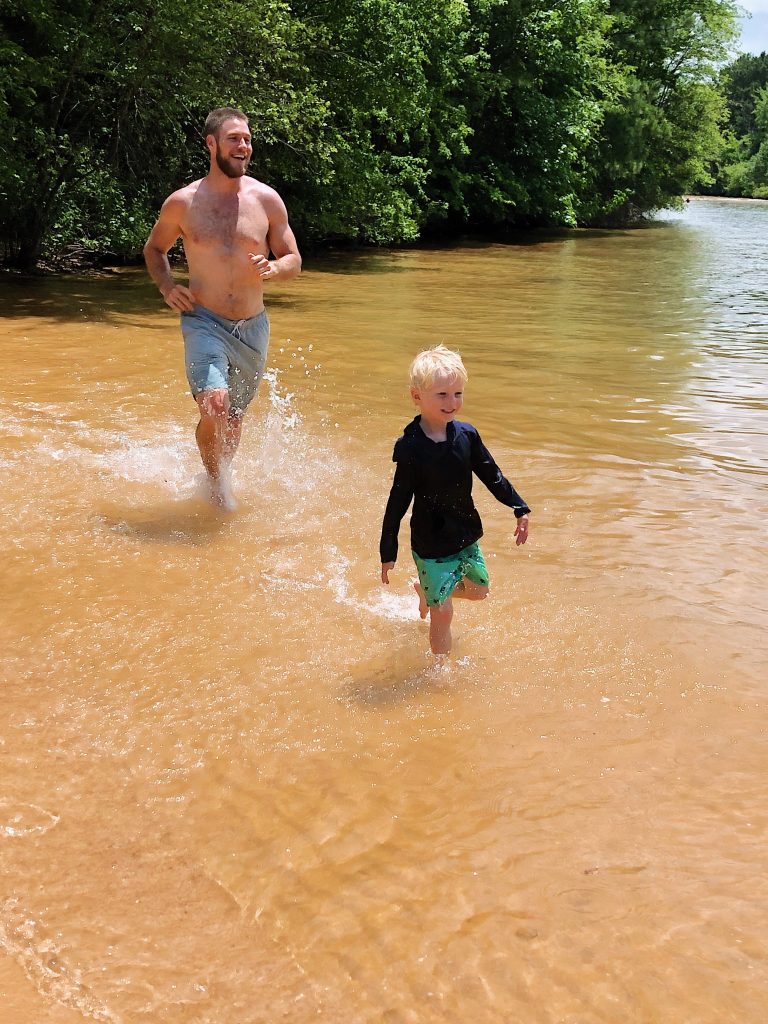 Of course a lot of splashing and running around in the water happened as well!

Oh, and yes, Ryan was the latest victim of a “quarantine haircut” when he finally threw in the towel on his growing locks and let Chase buzz it on Friday night. I helped clean up the sides and edges a bit so it was a family affair. Haha!

The rest of our Sunday passed by in a blur of more outside time at home after Ryder’s super-short nap. 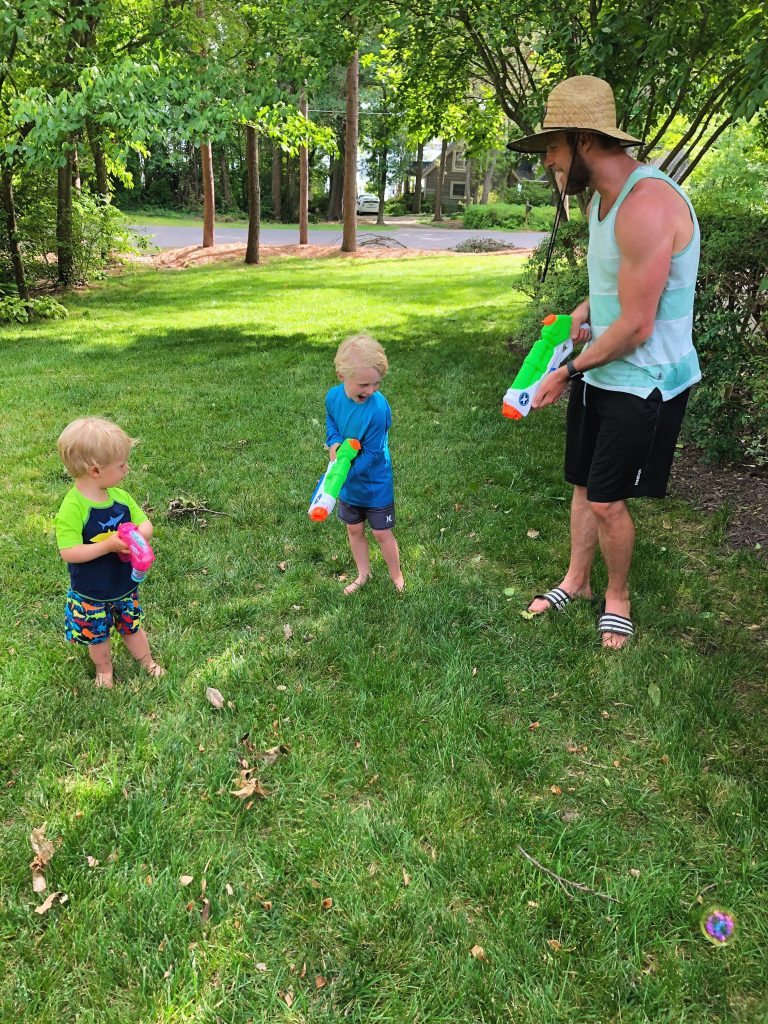 We grilled burgers for dinner, played water games in the yard and got the boys in bed just before 8 p.m. Success!

As for the week ahead, I’m hoping to be able to find pockets of time to knock out work since I have a number of deadlines approaching and am crossing my fingers for a bit of sunshine amid the rain on the forecast. I hope you guys all have a good week and, as always, appreciate you making PBF a part of your day!!