Ryan and I had tentative plans to go out to eat tonight to celebrate my blog milestone (we still haven’t gone out to enjoy a sit-down meal in our new hometown since we moved back in July), but a late meeting at work for Ryan foiled our plans.

We’re thinking we may reschedule them for Friday night. Sounds good to me!

Ryan’s late meeting also meant I got hungry for dinner before he got home… and I just couldn’t seem to wait. 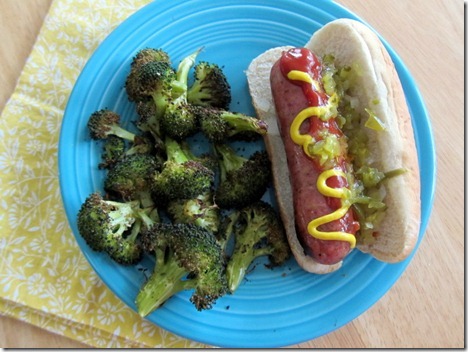 Tonight’s dinner included an Aidells apple chicken sausage. (Seriously I can’t bare to use descriptive words to describe a sausage because they all inevitably turn into one giant TWSS.)

I topped the sausage with the usual suspects. Ketchup, sautéed onions, relish and mustard. 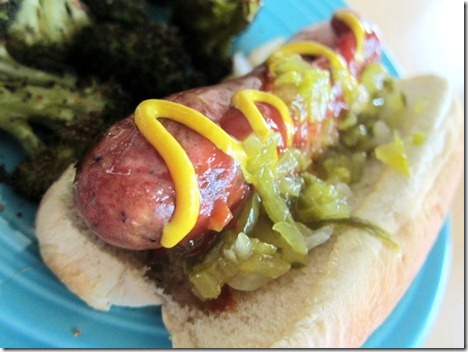 I’m also pretty sure every single close up picture of a sausage somehow manages to look wildly inappropriate.

I ate my apple chicken sausage along with roasted broccoli. I had plenty of broccoli leftover for Ryan until someone got a little sneaky when she was left alone in the kitchen. 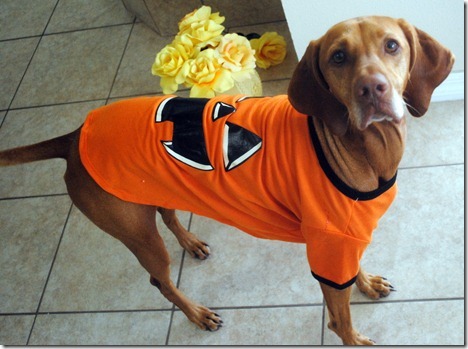 As you can see, Sadie tried on her new Halloween t-shirt that we bought her at Target this weekend.

The creatures that shall not be named may have ruined her previous pumpkin shirt. Ew. So glad were out of that place!

Sadie Fun Fact: She was dubbed “Pumpkin” as a puppy before we got her and named her Sadie so her new shirt is quite fitting.

« Two Years
See and Be the Good in the World »