Somehow I wrote this blog post on the plane home from Oahu and completely forgot to publish it! Oops! It’s a little delayed, but here’s a recap of our final night in Hawaii!

Our final evening in Hawaii began on a double decker trolley. Just after 6 p.m. we boarded a Waikiki Trolley for a ukulele serenade through Honolulu en route to the final dinner of the press trip. 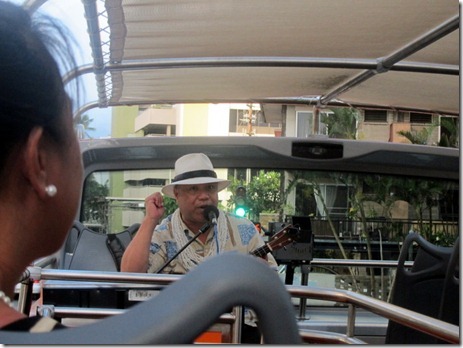 The man playing the ukulele had such a mesmerizing voice and in between the time he spent singing old Hawaiian songs, he told us stories and facts about Oahu. 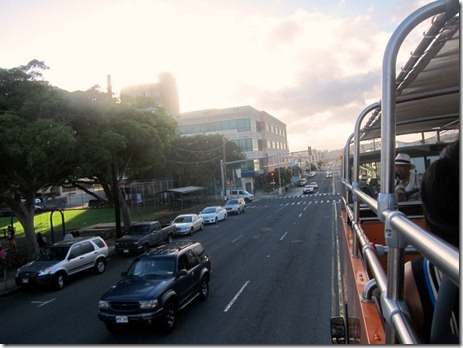 He made sure to point out historic sites… 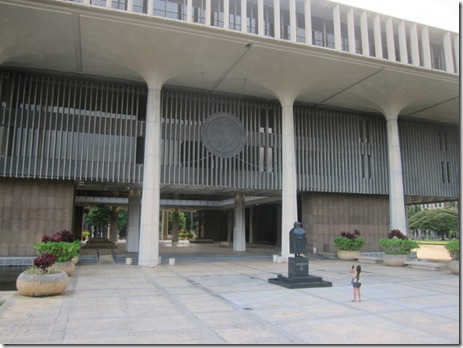 And the apartment building where President Obama grew up! 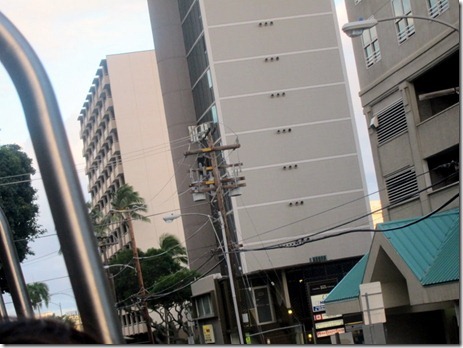 We were moving quickly, so my picture is pretty cruddy, but his old apartment building is the tall one that is the farthest away in the above picture.

I love island music and could’ve listened to the ukulele and soft singing of the ukulele player for hours. It was so relaxing. I asked him whether or not he had CDs available for purchase and he said, “No, you just have to come back!” His jovial, fun-loving attitude was so refreshing and seemed to be characteristic of the local people we met during our stay in Hawaii.

Both Ryan and I commented on how kind everyone seemed to be not only to tourists, but to each other. Maybe it’s a goofy thing to notice, but drivers seemed to let each other into traffic more and most of the locals we spoke to seemed so genuine. When I mentioned this to the director of the Honolulu Museum of Art over lunch earlier in the week, he joked that everyone in Oahu has to be nice to each other because you’re bound to run into each other again since the island is so small. He said that the whole “six degrees of separation” thing is really “one degree of separation” in Oahu. That made me laugh!

The trolley eventually stopped outside of Café Julia, our dinner destination of the evening, located inside the YWCA.‘ 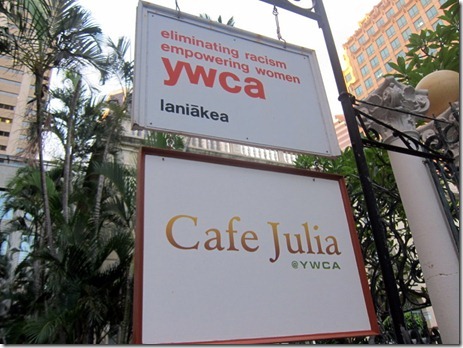 I started the evening with a lager from Aloha Beer Company. 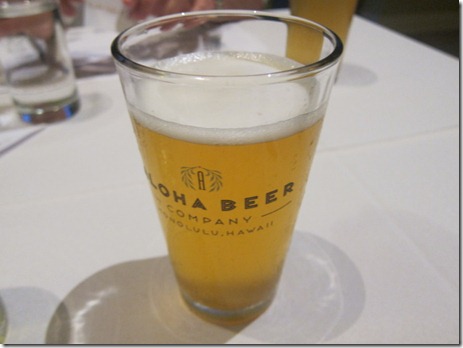 When I went to put my purse down at my place at the table, I got a kick out of the text on the placemat in front of me. 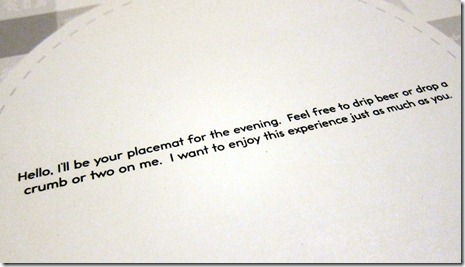 When Ryan saw it, he said it was perfect for me, since I somehow manage to get crumbs and food particles everywhere when I eat, cook or bake. He’s absolutely right and it’s kind of ridiculous how I’ll find a piece of cilantro from lunch or something in my hair an hour after we’re done eating. It’s a gift. 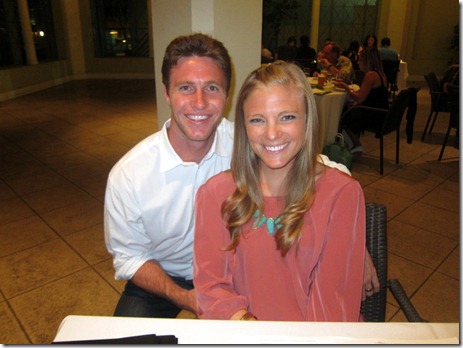 Though dinner was served in the beautiful courtyard location at Café Julia, the meal itself was a collaboration between the head chef at Café Julia and the two chefs behind the pop up dinner duo, Miso and Ale. Apparently pop up dinners are quite popular in California and other places in the United States, but I was completely in the dark and thought the concept was so unique! Just in case you’re new to “pop up” dining like I was, restaurants lend their kitchens to other chefs who are able to “pop in” and use their space to create their own meal for the afternoon or evening.

Our meal included five courses of some of the best food I had since my arrival in Oahu.

The first course included a local farm-fresh salad with Waialua asparagus, MA’O Farms organic greens (we toured this farm earlier in the week!) and Ka Lei eggs in a lemon vinaigrette. 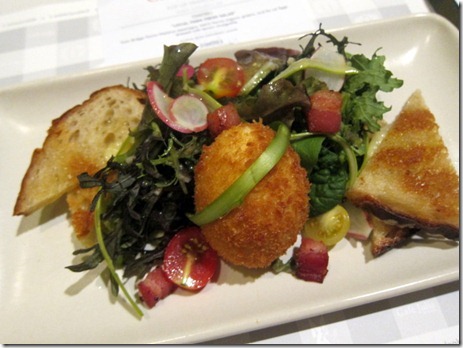 As a huge fan of dippy yolks on my salads and vegetables, this course was easily one of my favorites of the night. The little toasts you see in the above picture were topped with cheese and sealed the deal on this course for me. A winner! 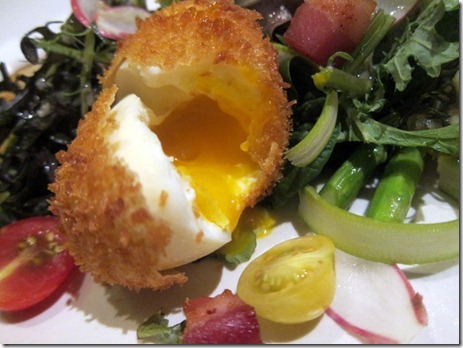 The second course of the evening blew everyone at my table, including myself, away. 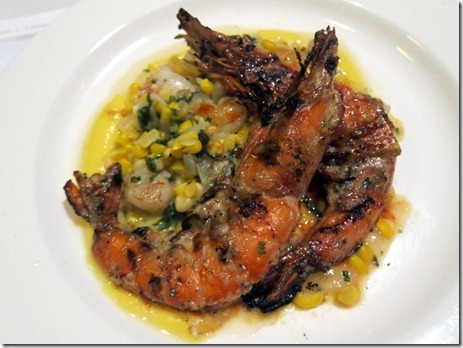 The corn was incredibly sweet and added the perfect texture to the dish. It was my favorite course of the evening! 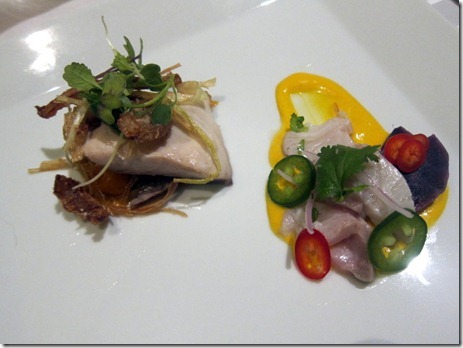 The yellow sauce had quite a kick to it!

The fourth course featured a braised short rib with the most fantastic purple sweet potato. This course was like comfort food on a plate! 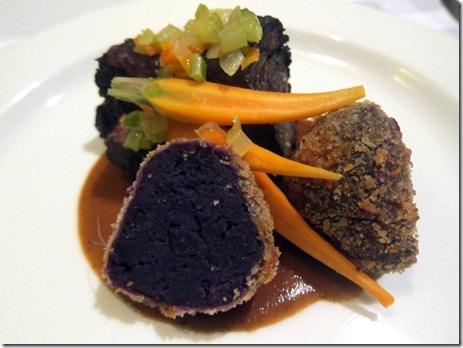 The fifth and final course was dessert and involved a fun demonstration from two of the chefs from Miso and Ale. 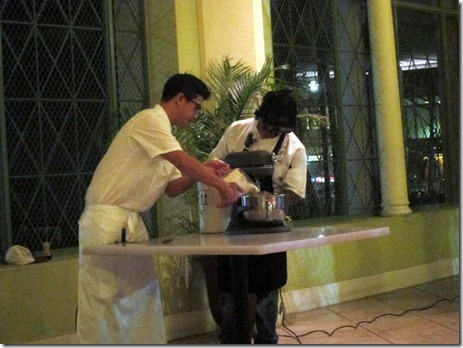 They made ice cream in a KitchenAid mixer with liquid nitrogen. 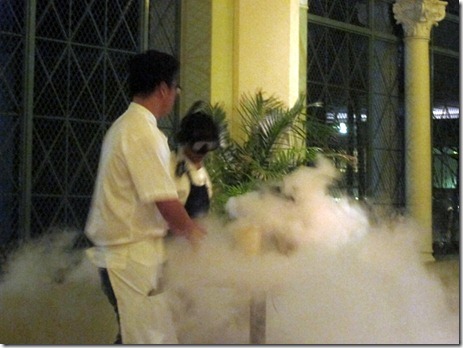 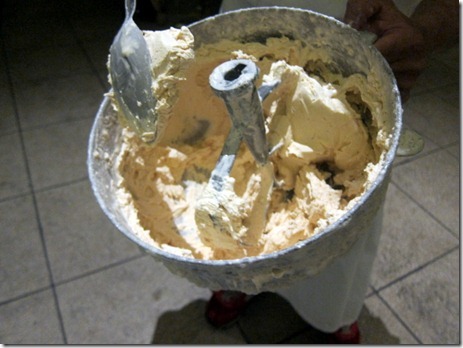 The ice cream tasted like creamy gelato and they used it to make a “deconstructed bananas foster.” 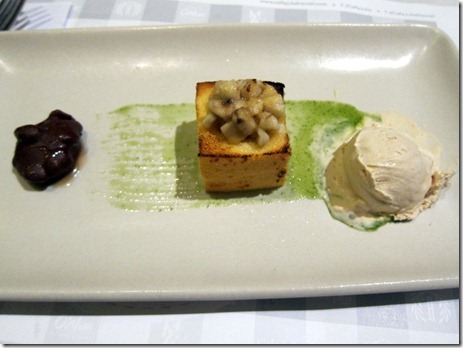 No bite was left behind!

When we were done eating, our press group said goodbye to the fantastic women who organized our trip. We spent so much time with them during our stay in Hawaii that it was really sad to say goodbye. Our time in Oahu was absolutely unforgettable and I am so grateful for the memories!

P.S. The Fashion page was updated.