Navigation
It was a very L-O-V-E filled weekend for the Fagan family as we spent most of the past few days as a family of five (Sadie always included). This is exactly what I wanted after Ryan spent the past week in Vegas on a work trip. He booked a red eye home on Friday and texted me at 3 a.m. our time telling me he was boarding the plane. A few hours later, he walked through the door of our house and Valentine’s Day celebrations ensued! 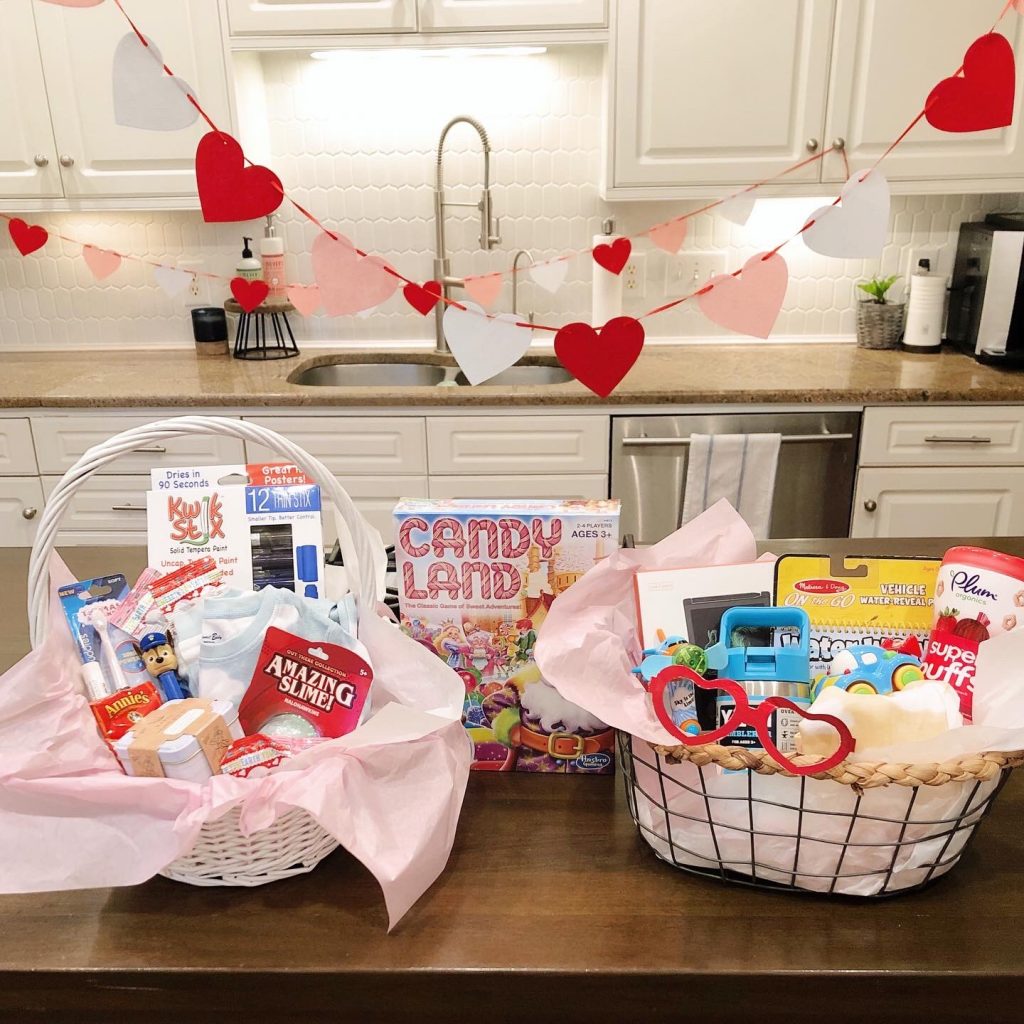 I think this is the first year I put together gift baskets for the boys for Valentine’s Day and I had so much fun assembling some treats for our little guys. I mostly filled their baskets with some things they needed like a toothbrush, water bottle and the cutest cloud pajamas that look $$$ but were only $14 on Amazon (I ordered blue for Chase, yellow for Ryder and pink for my niece) but couldn’t resist including a few surprises I knew they’d love as well.

For Chase, the biggest hits were Candy Land (an impulse buy from ALDI), glitter slime and Kwik Stix, fast-drying, non-toxic tempera paint pens that two of my friends highly recommended to me. Ryder was all about his Puffs (surprise, surprise) and the LCD writing tablet I ordered for him since he’s been stealing Chase’s since Christmas. (FYI, that $9 writing tablet is the BEST for car entertainment. Chase loves drawing maps, practicing his letters, etc. Ryder simply enjoys scribbling his heart out. Keep that tablet in mind if you need a good Easter basket filler!)

We ate banana bread protein pancakes as a family for brunch and played around the house until Ryder was ready for his nap. Since Ryan got about two hours of sleep total on the plane, he napped as well and Chase and I filled our quiet time with Candy Land and card games. 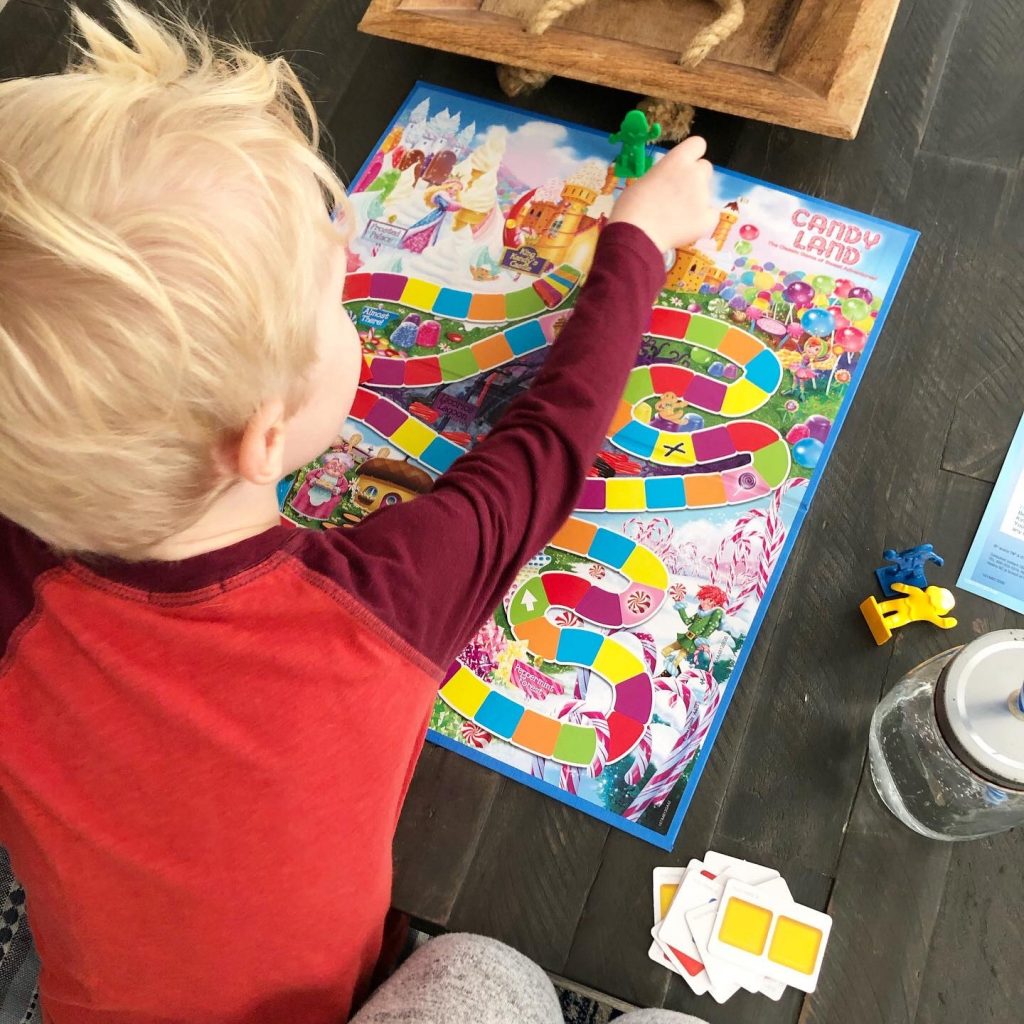 Apparently Chase has played Candy Land a number of times already at preschool because he told me, “Mom, I already know how to play this game and it’s okay if we don’t win.” Ha! Clearly his teachers are working with his class so the kids don’t all dissolve into tears every time they lose a game.

Once Ryder and Ryan were awake, we kicked off our Valentine’s Day plans and drove to Concord to put our Sea Life Aquarium memberships to good use. 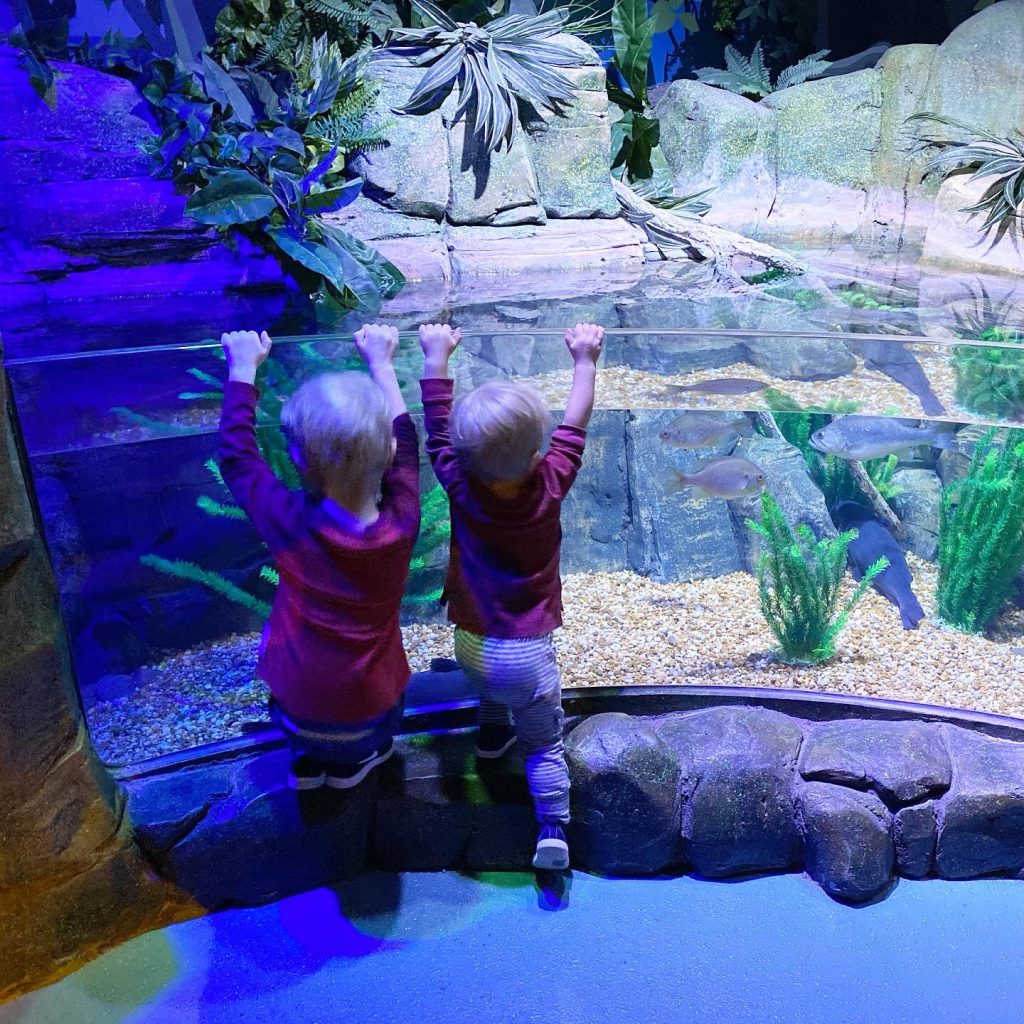 The aquarium was more of an afterthought activity because it is located in the same mall that’s home to Build-a-Bear which was our big plan for the boys for the day. 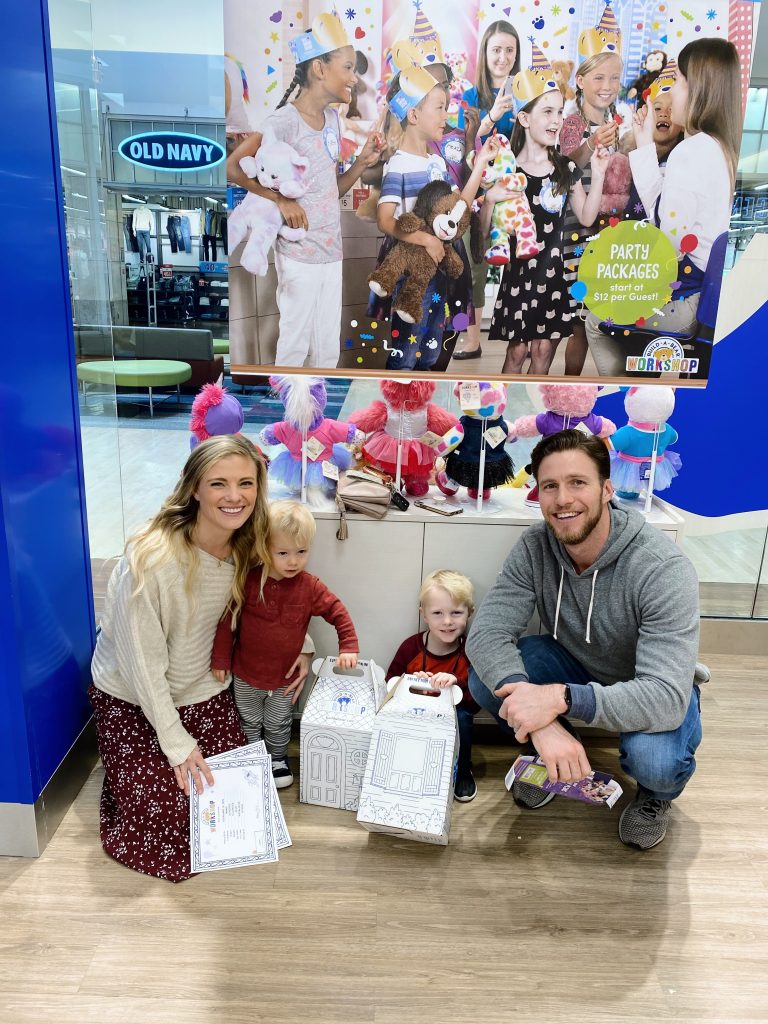 Neither Chase nor Ryder have ever been to Build-a-Bear and they were ALL about it! They ended up choosing random shark toys (Ryan and know enough by now to strongly encourage Ryder to pick the exact same toy as Chase) and both boys loved the whole process. 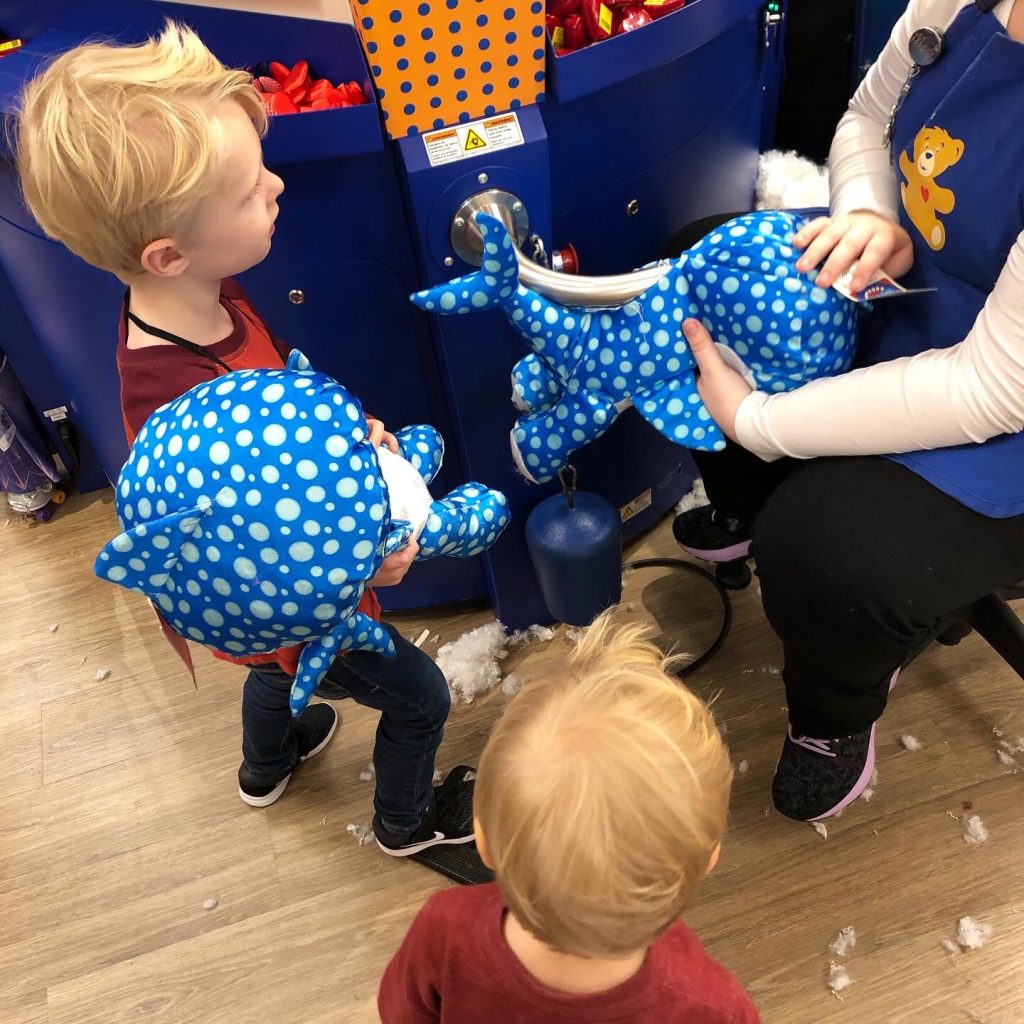 They were very into stuffing their sharks, selecting a heart for inside their matching animals, naming their sharks (both are “Mako” thanks to Chase) and printing their “birth certificates.” While I know the boys got to keep a stuffed animal out of this ordeal, something about the whole Build-a-Bear visit felt much more like an experience gift and we loved it! Plus, it was the gift that kept on giving all weekend because the boys loved decorating the cardboard box houses for their sharks on Saturday morning and carting them all over the house all weekend long.

We wrapped up our Valentine’s Day fun with a visit to Alino Pizzeria — our family’s favorite pizza spot in the area — and ordered two pizzas to share. 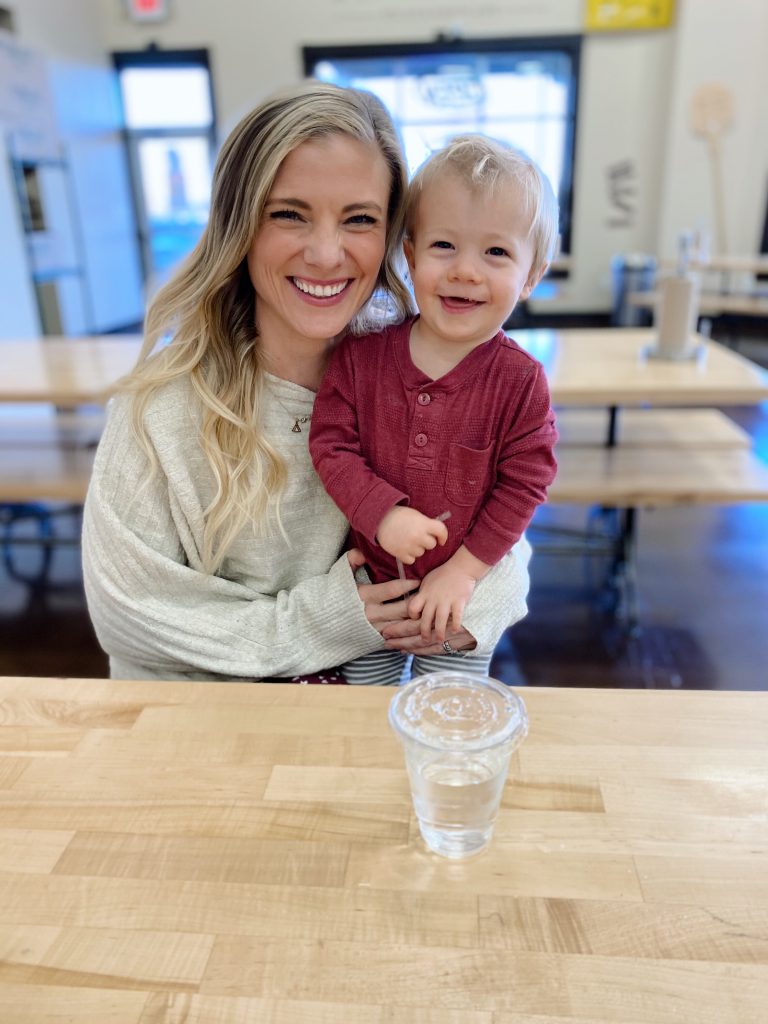 We left full and happy and made it home just in time to dive straight into the boys’ bedtime routine.

The family fun continued on Saturday with a lazy morning at home (Sadie’s favorite #notamorningdog), some crafting and more pancakes. 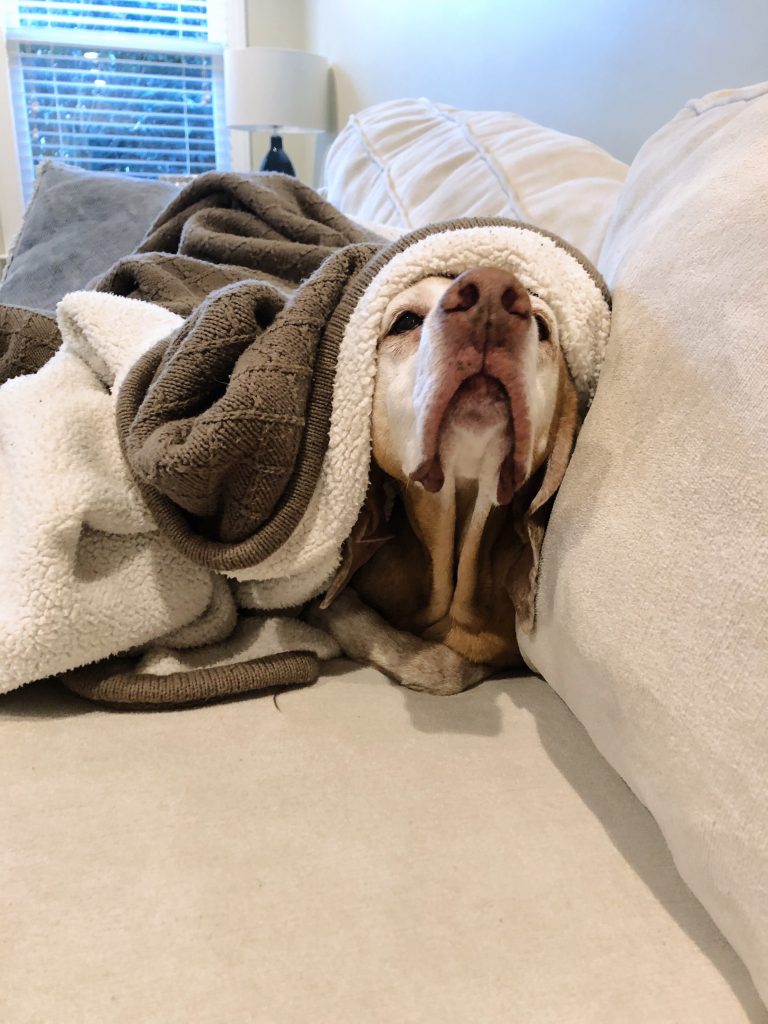 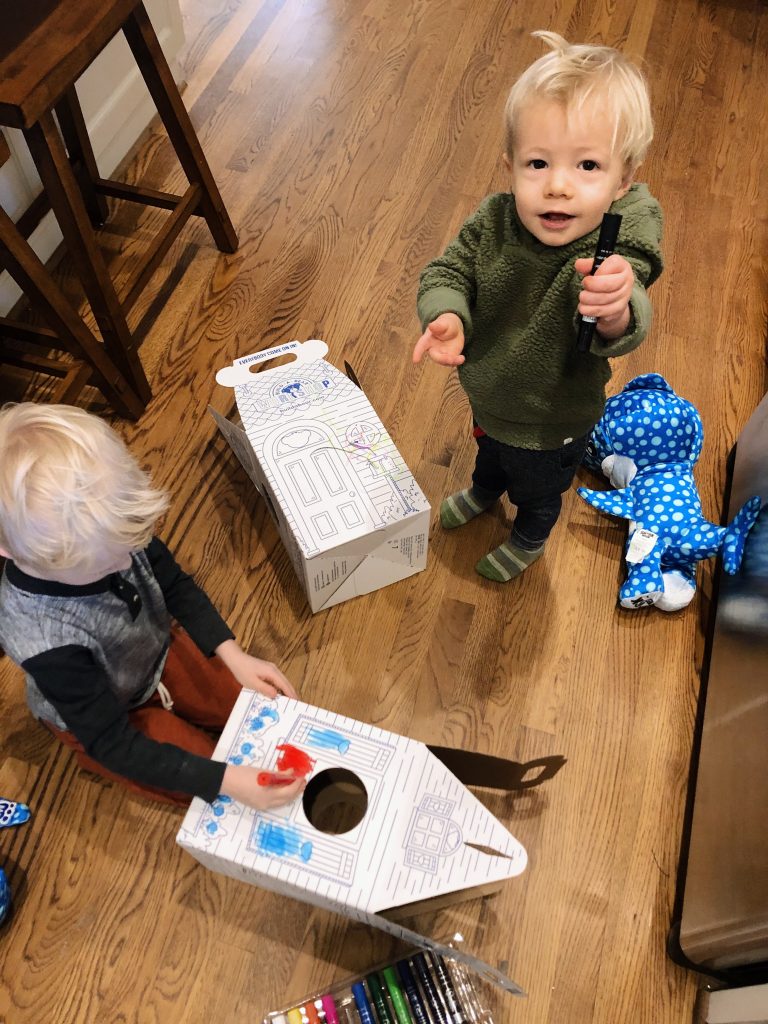 (The Kwik Stix were clearly a better gift for Chase than for Ryder at this point because Ryder would have me open one for him, draw a single scribble on his shark’s box house and then immediately select another paint pen for me to open for him.)

We made the mistake of hyping Chase up about a library event in the area where Pete the Cat was set to make an appearance because we didn’t realize the event was limited to the first 20 kids in attendance. Though we arrived 20 minutes early, we were still too late for a spot and after some tears in the car, we managed to salvage the morning when we mentioned taking the boys to Lowe’s since we had a microwave waiting for us for pickup. Yep, you read that right… Lowe’s. Chase rides the completely stationary tractors at Lowe’s with all the enthusiasm of a kid at Disney World. 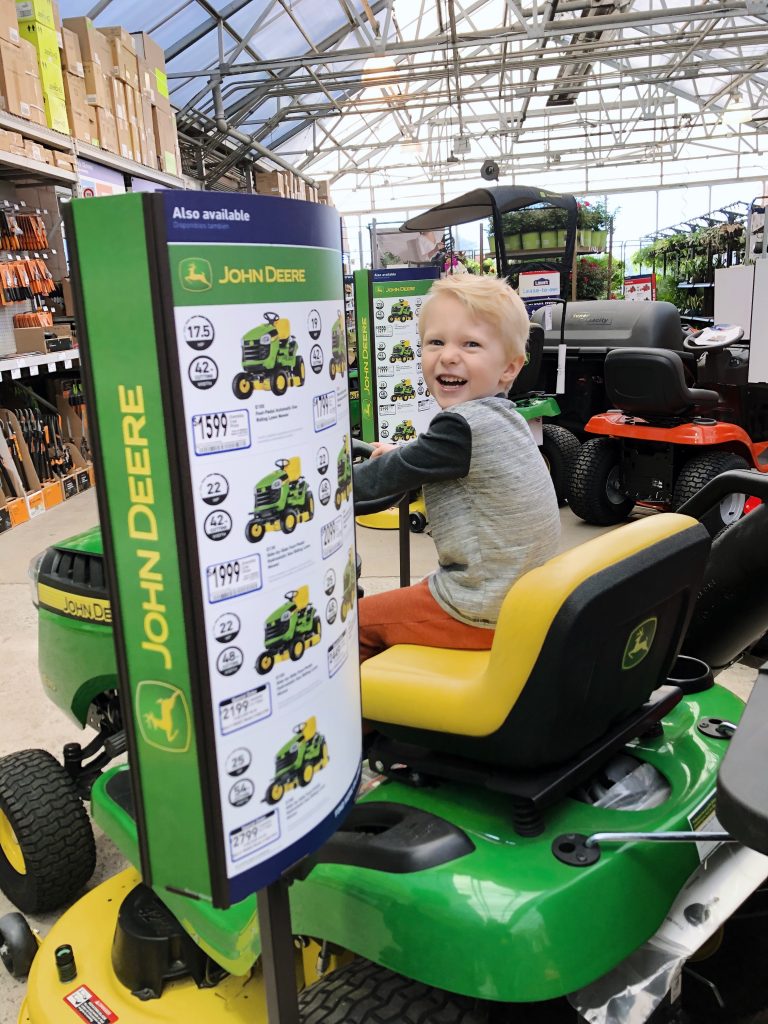 Most of the time our family trips to Lowe’s look like me riding the tractors with the boys while Ryan runs all over the store shopping for whatever items are on our list. 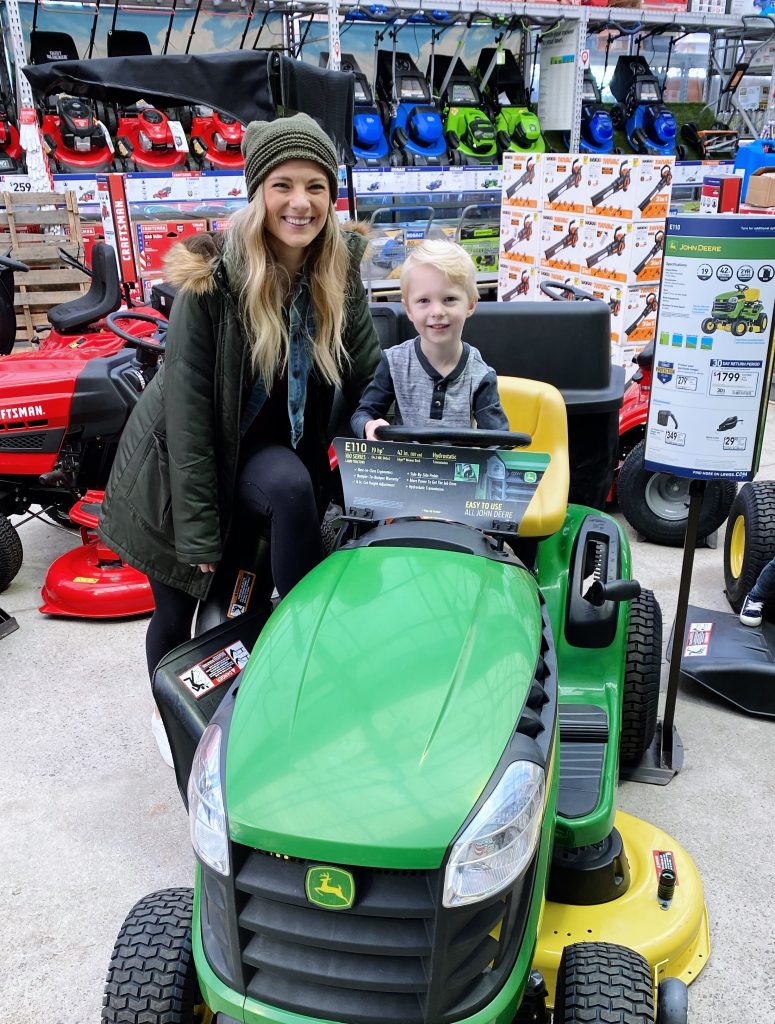 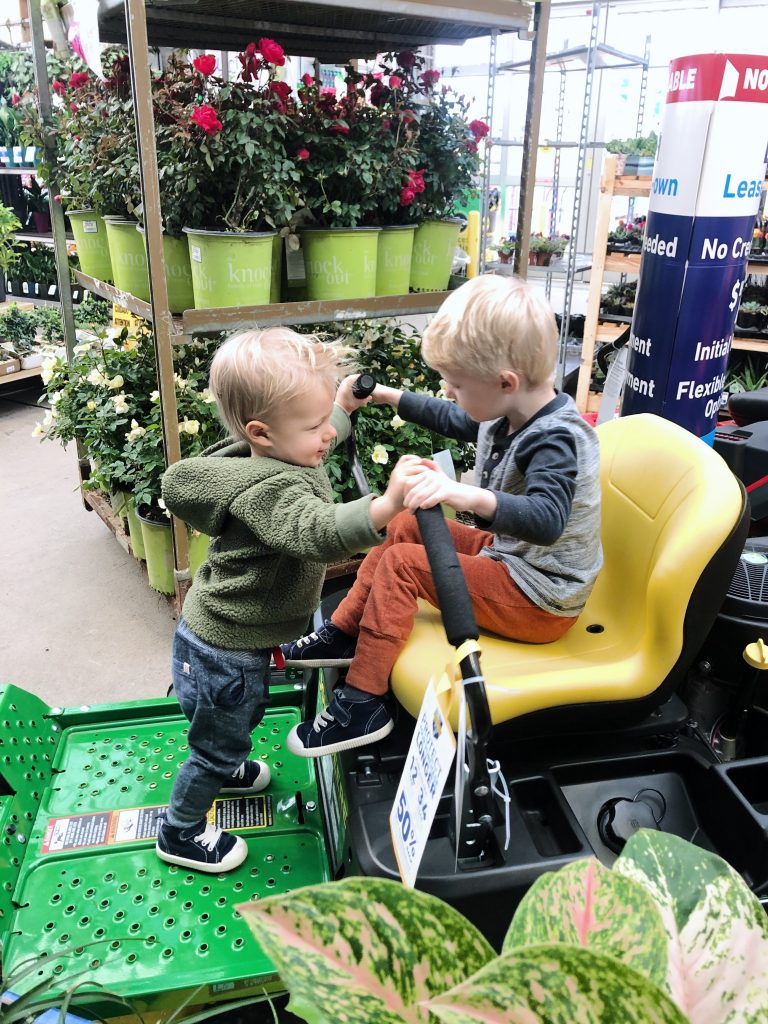 After our stop at Lowe’s we took the boys to Target with us for our annual Valentine’s Day mission! We wanted to include the boys in the mission this year so they could see me and Ryan caring for each other and also encourage Chase to think of others on a day that’s all about spreading love. Ryan and Chase teamed up with $20 and went on the hunt for a Valentine’s Day gift for me while Ryder and I set off in search of some treats for Ryan. 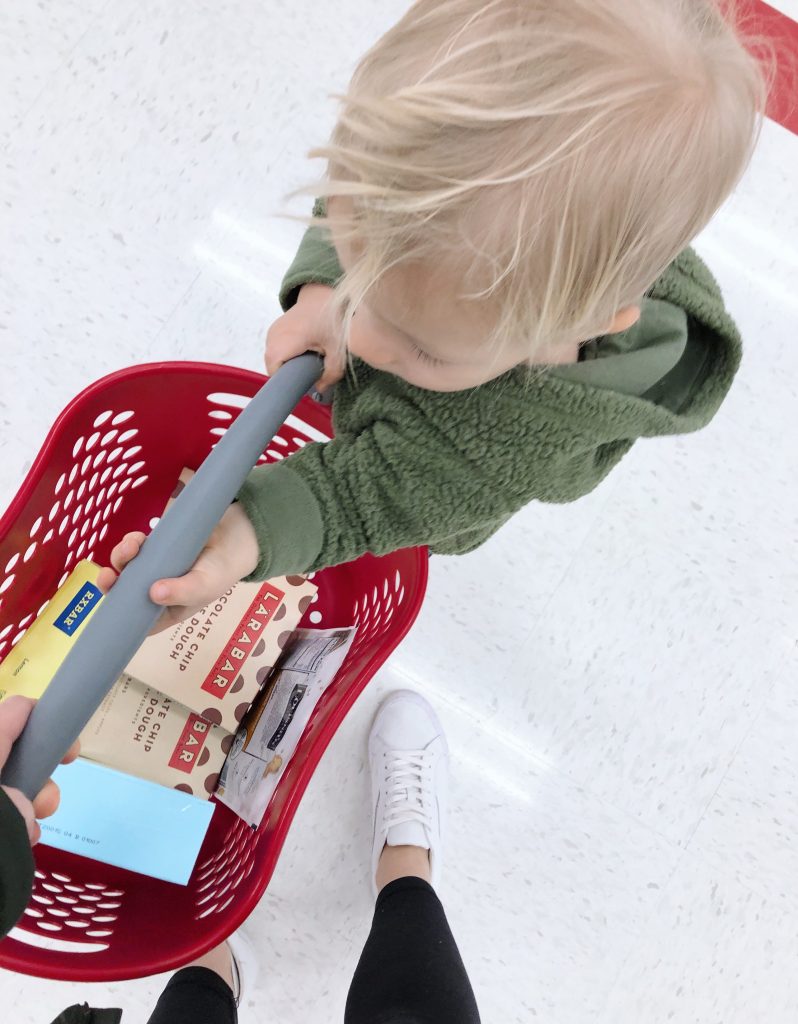 I made the ginormous mistake of letting Ryder walk around Target versus strapping him in a cart, so most of my time was spent wrangling an almost 20-month-old who was determined to touch everything in all of Target.

Once we made it back home, we ate lunch as Ryan and I opened our Valentine’s Day surprises. Chase helped Ryan pick out some winners for me — a new 1,000 piece puzzle (I’ve been really into puzzles ever since my mom and I got into them again over Christmas), a 100-piece puzzle Chase already helped me assemble on Sunday, two chocolate bars, tea and no-show dinosaur socks that clearly called to our T-Rex-loving dude.

Ryder then went down for his nap as Chase and Ryan leashed Sadie up for a walk around our neighborhood while I caught up on some work and did a load of laundry. The rest of our Saturday looked like Jimmy John’s for dinner and playtime at home in our pajamas.

I slept terribly on Saturday night. I was randomly up for 2.5 hours in the middle of the night and then couldn’t get my body to sleep past 5 a.m. The plus side of this sleep madness? I finished my latest book, The Overdue Life of Amy Byler, and really enjoyed it. The downside? By 2 p.m. on Sunday I was seriously dragging!

I took advantage of my early Sunday wake up and did my devotional before I managed to get a bunch of work done. Once everyone else was up and we were all dressed, we downed smoothies for breakfast and made our way to the siblings class at MyGym. 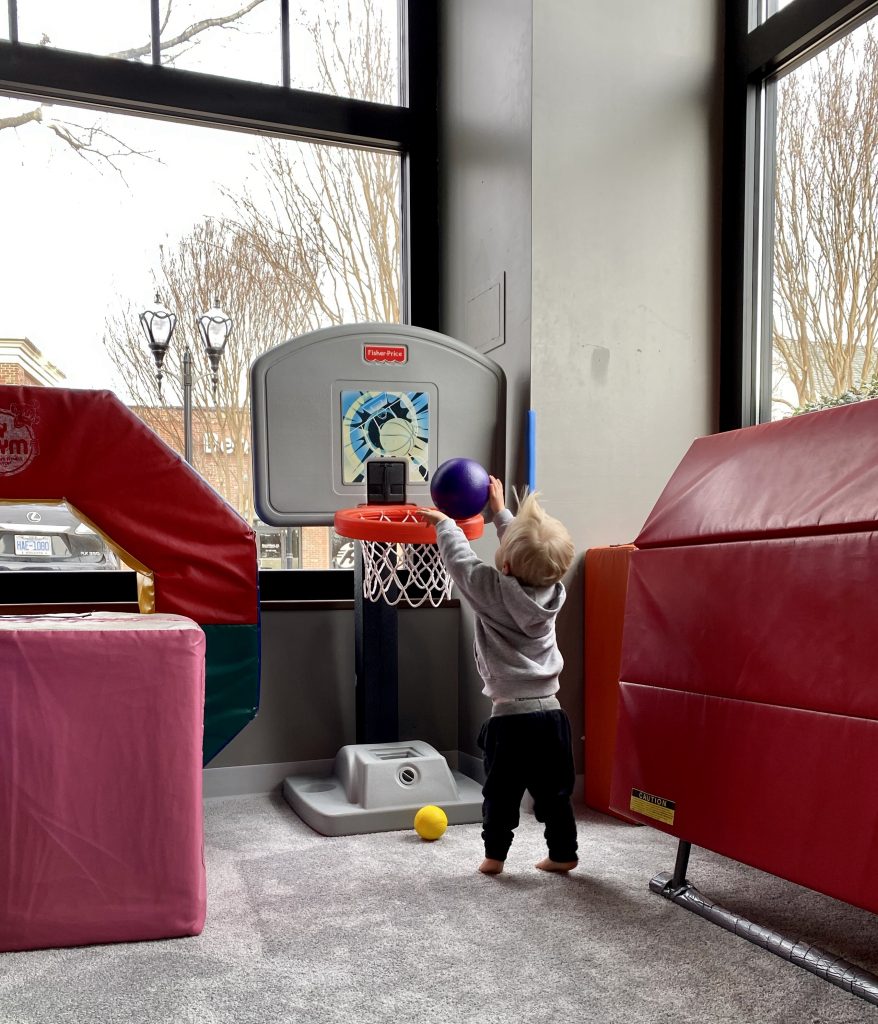 As usual the boys were super into it and had a great time running all over the place.

After MyGym, we made our way to a local park for playtime. It was overcast all day on Sunday but not nearly as cold as Saturday and we were all itching for some time outside.

By the time we made it home, we were ready for a little downtime. Ryder took his nap while Ryan and I played Candy Land a million times with Chase. Eventually Chase and I took off for an afternoon birthday party at a local bounce house place and spent a couple of hours with his buddies eating cupcakes and bouncing all over the place. 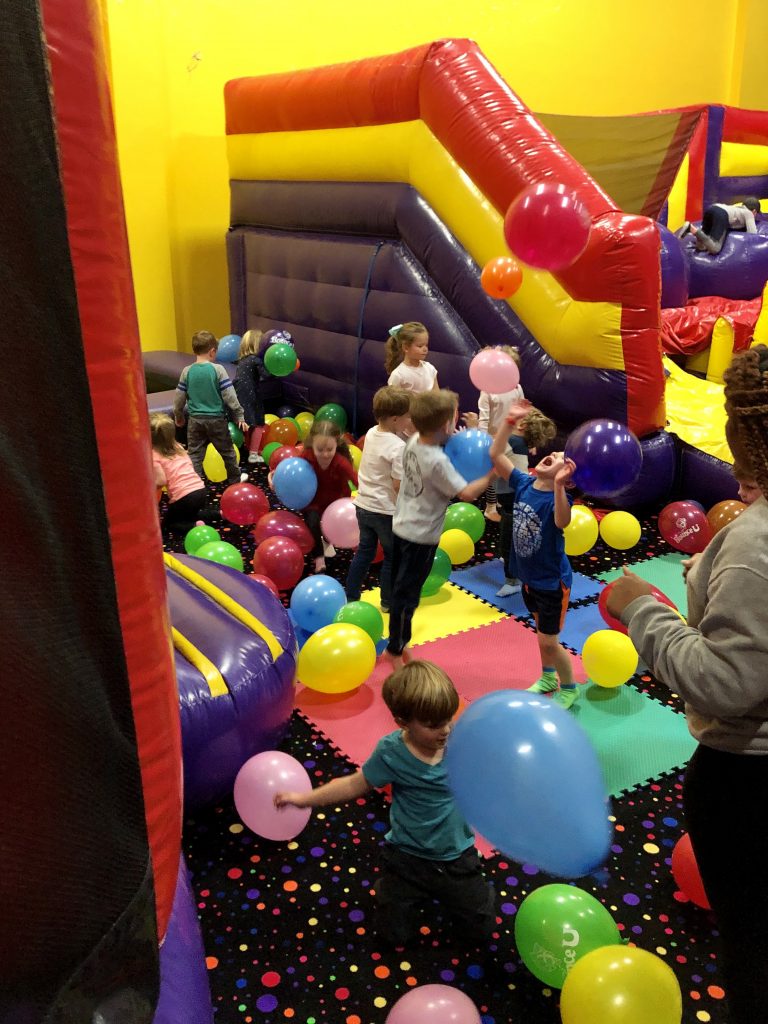 All of the kids were super sweaty by the end of the party — always a sign of a good time!

On our way back home, Chase and I popped into Fresh Chef to pick up dinner for our family and spent the rest of the evening playing at home before the whole bed time routine.

As for our plans for the day, Chase doesn’t have school in honor of President’s Day so I’m sure the boys and I will get up to something fun this morning. Ryan and I also have our couples small group this evening so I have a feeling it will be a good day from start to finish. Thanks so much for stopping by PBF today and I hope you have a fabulous Monday!