When I think about yesterday there are 10,000 things I could blog about because we crammed so many sights, activities and adventures in one day. It was incredible and we had a BLAST!

Our day began with a 5.5 mile sunrise run around Waikiki. Ryan and I still aren’t completely adjusted to the time change and have  been waking up ridiculously early despite our best efforts to sleep in. Awaking extra early on vacation has its perks though and our run yesterday morning was the best run I’ve had in a very long time.

It was so peaceful running around Waikiki as the sun came up. Ryan and I were both surprised at just how many other runners we saw out so early. It seems like Oahu is a very active island which is really neat.

After our run, a quick rinse off in the shower and a speedy breakfast at the Honolulu Coffee Company’s adorable store located in the Moana Surfrider hotel, we hopped in the car and drove out to Waimea Falls, our first destination of the day.

Many of you recommended checking out Waimea Falls and I can see why! 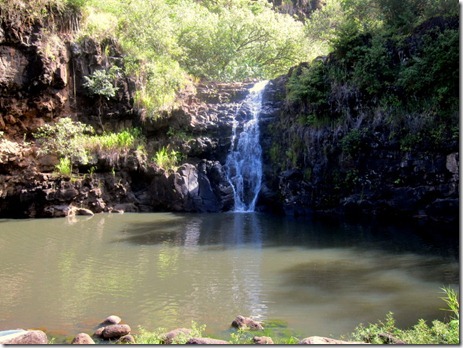 The walk to the falls was a little less than a mile and meandered through a beautiful botanical garden. 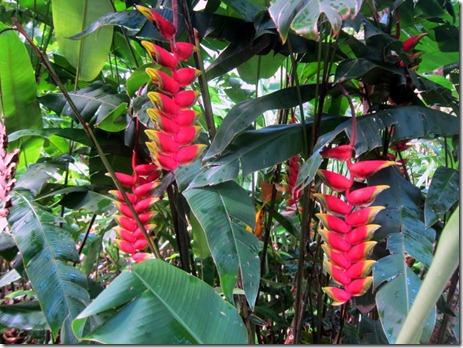 Everything was so lush and vibrant. 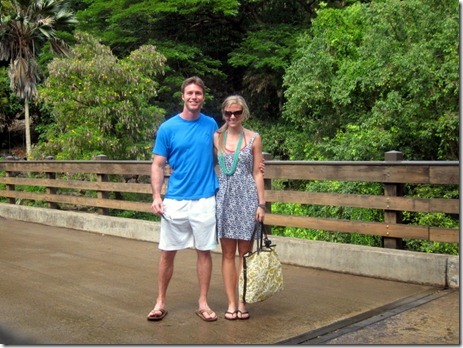 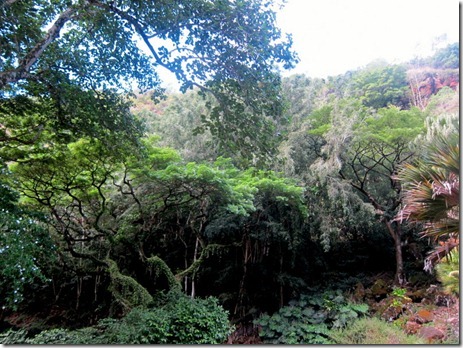 We arrived at Waimea Valley right when it opened at 9 a.m. and were the first ones there, which was pretty cool since it felt like we had the gardens to ourselves. When we made it to the waterfall, the charismatic lifeguard at the falls seemed excited to have his first visitors of the day and encouraged us to swim before more people arrived. How often do you have a gorgeous waterfall to yourselves without the help of Chris Harrison? 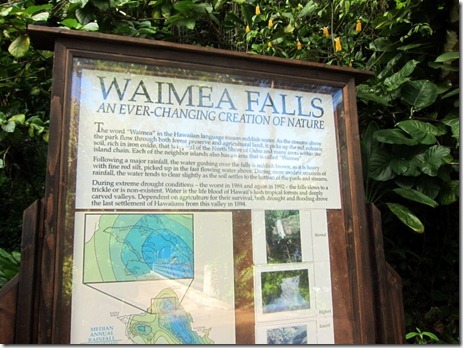 Before we got into the water, the lifeguard asked us if we heard about any of the legends surrounding the falls and began telling us some super creepy stories about human sacrifices and spirits. The water below the falls wasn’t very clear and apparently the depth reaches 30 feet. The deep, murky water, coupled with the freaky stories from the lifeguard had me spooked and Ryan amped!

As Ryan and I waded into the water alone, I had a billion creepy thoughts going though my head and kept feeling like something was going to grab my legs and pull me under. Clearly, I cannot handle scary stories (or scary movies). The drains at the bottom of pools always freaked me out as a little girl. I don’t mind deep water and love scuba diving, but tell me a scary story and then make me swim in water where the clarity is so poor that I can’t see below my stomach and I turn into a big baby.

Obviously nothing grabbed my legs and I had a good time splashing around with Ryan. 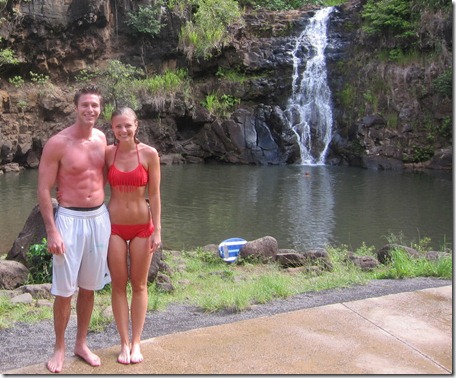 I feel like you can still see the nervousness on my face in the above picture! Or maybe I was just cold? The water was 72 degrees, but I didn’t really notice the temperature because I was too concerned with the sprits below the water who were coming up to eat my soul.

The lifeguard was really fun to talk after we were done swimming and was full of facts and information. When I asked him about how many rescues he makes, he said that lifeguards at the falls typically make between three and seven saves a day. I was shocked! I was a lifeguard at a community pool for four years and only witnessed one rescue the entire time. Swim safe, my friends!

After our time at the falls, we drove across the street for the most exhilarating activity of our trip so far. 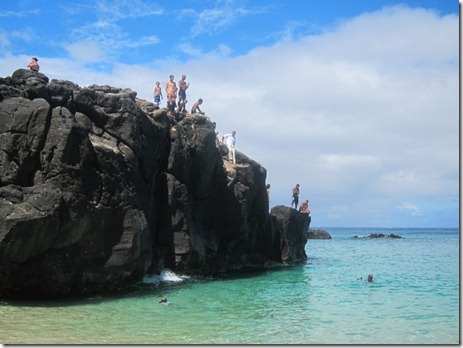 This activity became a MUST for me after Karli tweeted a picture to me of her jumping off the rocks on Monday. It looked so awesome and I was sold the minute I saw her picture. 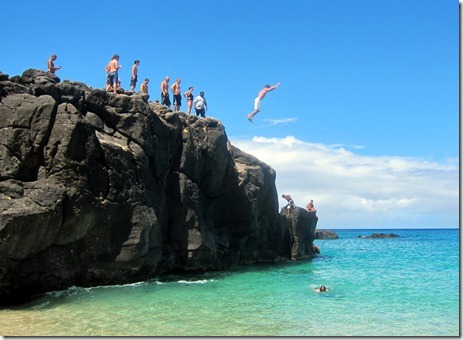 And then I jumped! 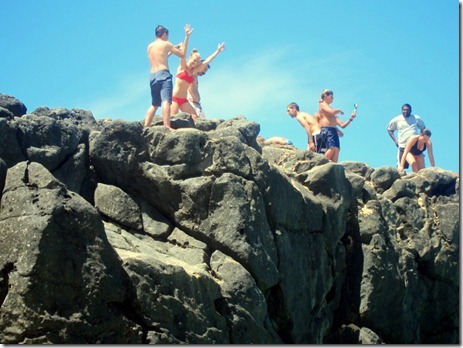 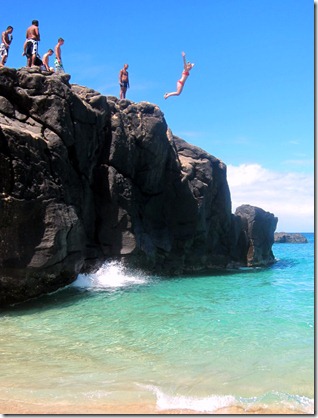 I thought I would be much more nervous about jumping off the rocks, but once I got up there, I found myself feeling so, so excited. It was a blast!!!

Our next stop of the day took us to Shark’s Cove for some snorkeling. 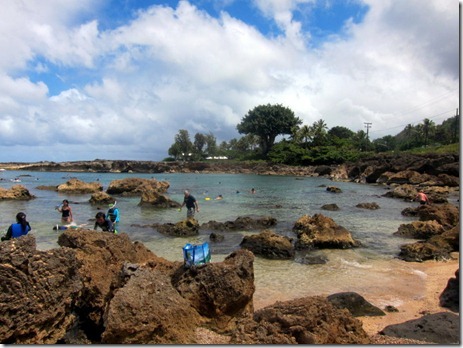 We saw a lot of fish and sea urchins and the visibility was great! The water was cold, so I didn’t last very long and my grumbling tummy told me it was time for lunch.

Ryan and I grabbed lunch at Kono’s, a casual, local restaurant located in Haleiwa. 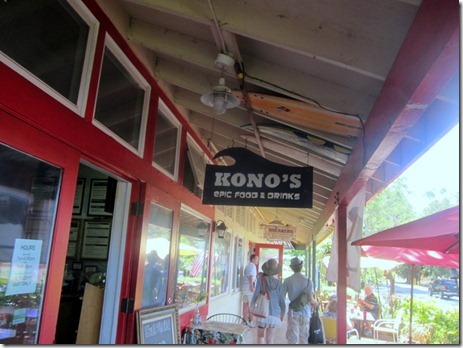 I ordered the avocado salad with papaya dressing and we ate our meals outside at a picnic table which was perfect. 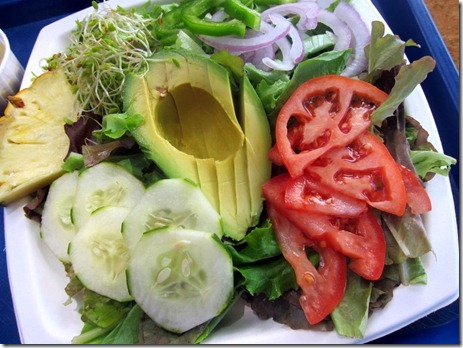 Gotta love a salad that incorporates half of an avocado!

After lunch we knew we had to try Matsumoto’s shave ice after reading so many of your comments that absolutely raved about this sweet treat. 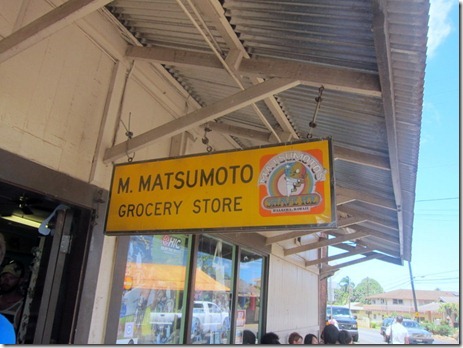 I’ll be honest when I say I wasn’t all that intrigued since I am not the biggest fan of snow cones, shave ice or Italian ice. If I’m going to eat something cold and sweet, I want it to be creamy, like ice cream or frozen yogurt.

Well, I am a changed woman. This stuff was out of control! 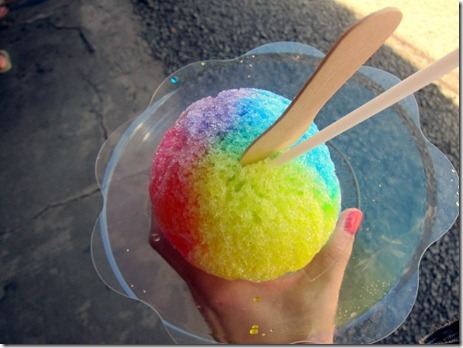 I ordered a Matsumoto (pineapple, coconut and lemon) with ice cream (served below the shave ice) and could not stop raving about the flavors. Most of the colors didn’t match the flavors at all, which I found really amusing. Coconut was pink and pineapple was blue! Pineapple was my absolute favorite.

I kept the pineapple lovin’ going as we headed back to our hotel when we made a pit stop at the Dole Plantation. 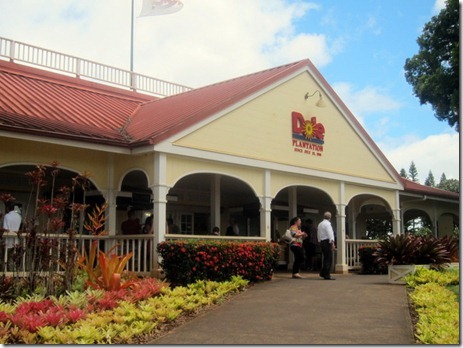 Ryan and I shared a cup of the Dole whip before walking around the plantation and loved every bite. 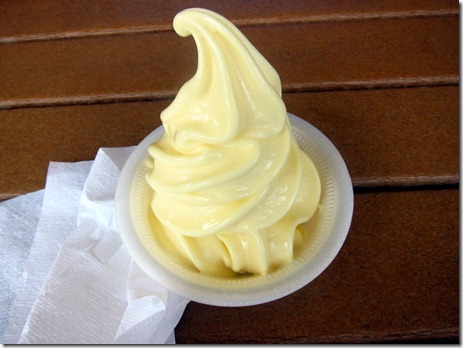 We didn’t have much time to change and get ready for dinner, but I’ll be back with a recap of our incredible meal in a bit!