Navigation
Oh hey there, Monday! You sure do like to sneak up on us, don’t you?

After another way-too-fast weekend, Monday has arrived but this week will be a little different than usual around here. Chase, Sadie and I are headed off to Florida today! I’ve never tackled the drive to my parents’ place in Jacksonville with Chase alone and let’s just say I’m a little on edge and curious to see how everything will go with just me behind the wheel for seven(ish) hours. I have snacks, toys, games and a DVD player packed and ready to go. My fingers are crossed all goes well!

I’ll be sure to share some of our Florida adventures on the blog this week but until then, let’s back up and chat about the weekend!

Saturday morning began with a bit of a slow start which was so nice. Ryan went to the gym a little before 7 a.m. and I made myself a bowl of triple chocolate protein oatmeal before settling in at the computer and working for almost an hour until Chase was up for the day. He slept in a bit more than usual which played right into our plans for a low key Saturday.

Once Ryan was home and everyone was fed and happy, we leashed Sadie up for a walk around our neighborhood and ended up at a nearby park for some playtime. 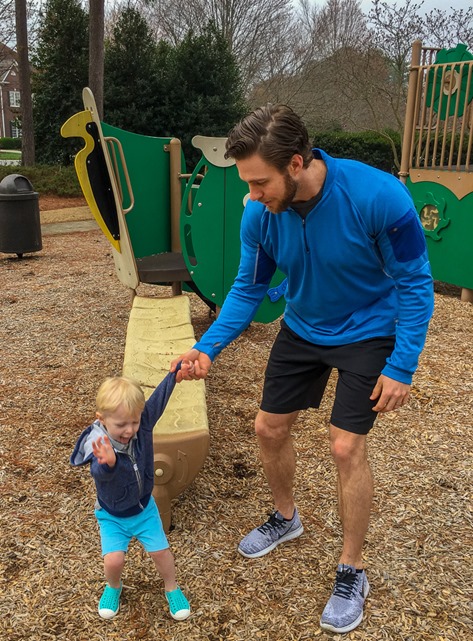 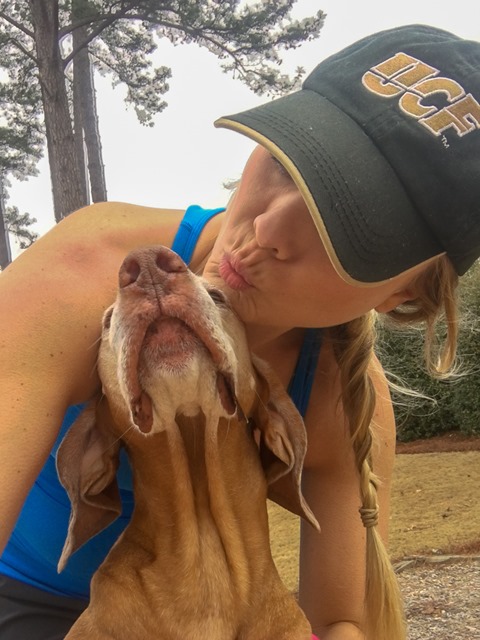 The park was empty so we had free reign and had a great time playing before we made our way to the nearby boat dock to throw rocks and feed the fish some of Chase’s snack crumbs. 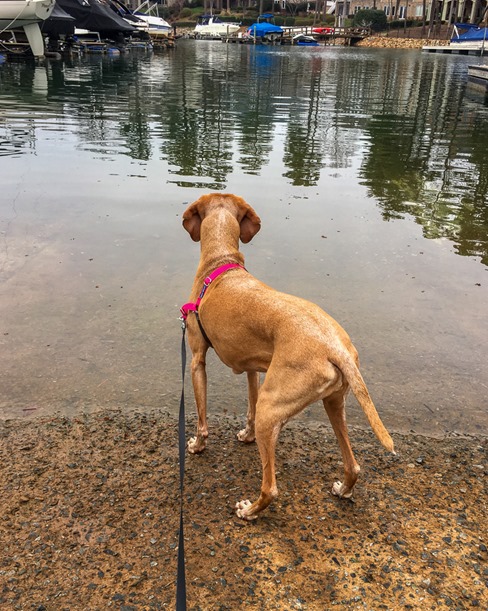 We made it back to our house around 10:30 a.m. and headed out to pick up some road trip essentials that I wanted to grab before we leave for Florida today. I know a constant supply of snacks is key for toddler happiness and entertainment on a long car ride, so I’m hoping the large supply of some of Chase’s favorites (and mine, too) will keep us from getting hungry and cranky! 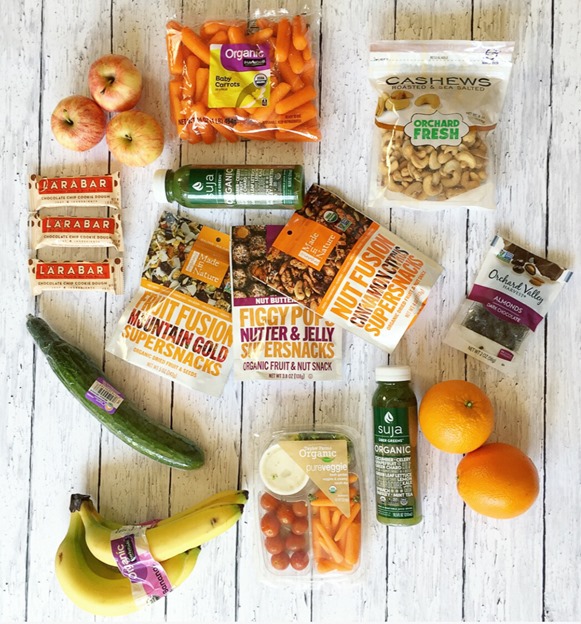 By the time we made it home, we were ready for lunch and I threw together a frittata and made sure to add a bunch of veggies to the frittata so we could avoid wasting as much fresh produce as possible before our travels.

Ryan and I both had work to do during Chase’s nap on Saturday, so we set up camp side-by-side on the couch, streamed Friends on Netflix and plugged away until Chase was up. Once he was awake again, Ryan suggested heading to Carburrito’s for dinner and since chips, salsa and guacamole always sound great to me lately, we piled into his car and made our way to Davidson. 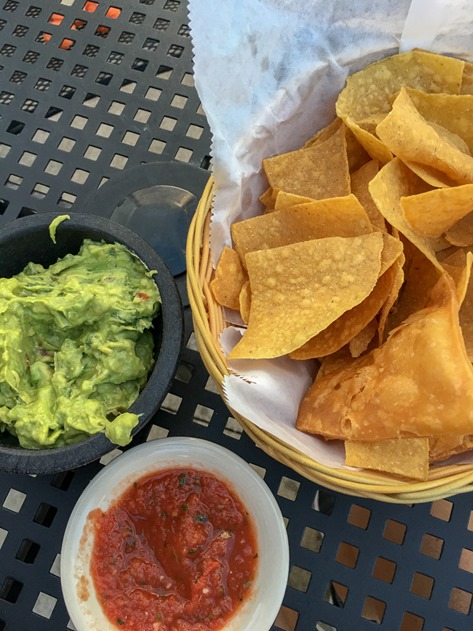 We’ve seen slooow progress with Chase when it comes to dining out (I laugh when I think about my pre-kid self who thought you could “train” a child to be calm and easy at a restaurant) but thankfully he seems to be becoming increasingly content to hang out with us and actually eat some of his meal when we go out to dinner. Choosing the right restaurant helps a lot (aka one that’s not too quiet with either outside seating or a lot of windows where Chase can point out cars and trucks passing by) and we had a really nice meal together on the patio of Carburrito’s on Saturday evening. Dining outside in February felt like quite a treat, too!

Of course there was no way we could be within walking distance of Whit’s an not stop by our favorite frozen custard shop for dessert. We ate our custard on a bench outside and as usual Chase ate his slower than we thought humanly possible and ended up with frozen custard soup. At least he seemed to enjoy every last bite of his liquidy treat.

Once we made it home, Ryan and Chase did some laps around the house in their cars (a nightly occurrence) before bath and bed time and, as usual, Sadie joined in the fun. 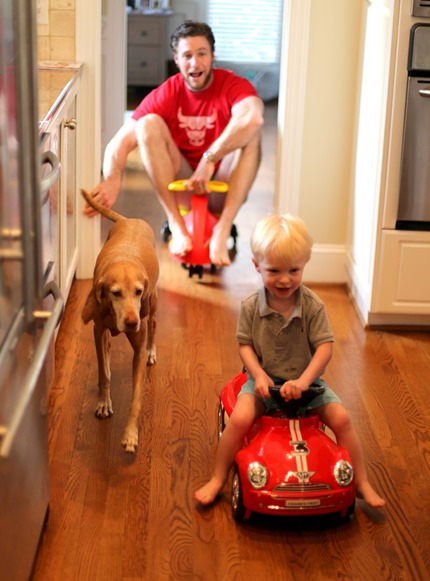 This activity always cracks me up because Sadie inserts herself in to their lineup almost every time and typically serves as their faithful caboose. 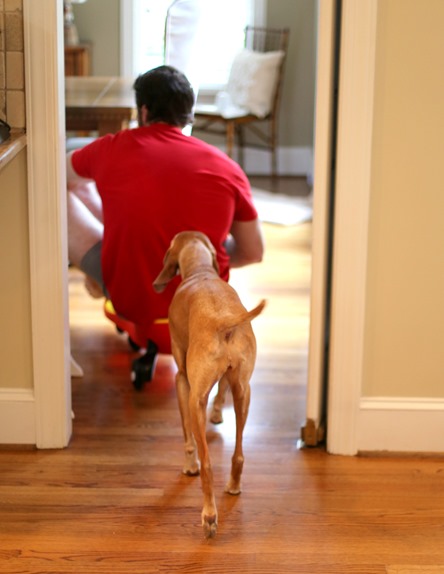 What a goof! I think she tired herself out because a very sleepy Sadie gave me a low growl when I tried to scoot her over from my spot in bed after I was done putting Chase down for the night.

Sunday morning began quite early! Ryan had his alarm set for 5 a.m. because he had to catch the first flight out to California for work. We’ll definitely miss him a lot this week! After I said goodbye to Ryan, I dozed in bed for another 45 minutes or so before it was clear I wasn’t going to drift back into a solid sleep. I got up, did a little online shopping for a friend’s upcoming bridal shower and threw a load of laundry in before Chase was up for the day.

Chase and I spent the morning at church and followed up the first service of the day with some errands. I really wanted to find a portable DVD player to bring with me for our drive to Florida today and grabbed one at Target but we ended up visiting three additional stores trying to locate a car adapter that will reach from the back seat to the cigarette lighter charger that’s located underneath the radio in the very front of my car. We weren’t able to find anything long enough, so I’m hoping I won’t be pulling my hair out in a few hours once the battery is drained and Chase is sick of his books, toys and snacks! (Side note: This is why I Amazon Prime everythinggg. I am kicking myself for waiting until the last minute to pack and get organized!)

We arrived home in time for lunch and a few stories before Chase went down for his nap and I began working on this blog post and a blog post I’m hoping to share tomorrow recapping the most recent four weeks of my pregnancy. I’m hoping to check in on the blog most days this week but also want to soak up some family time so I’ll do my best to blog when I have a spare moment or two to myself! (I’ll also likely be posting more in Instagram Stories so you can also follow some of the day-to-day fun there if you’d like!)

Once Chase was up for the afternoon, the rest of our Sunday centered around packing for Florida. Thankfully Chase needs WAY less stuff now than when he was a baby which makes packing for a week away a bit less daunting but it’s always hard not to feel like you’re forgetting something crucial!

I hope you all had a fantastic weekend and I’ll see ya next time from Florida!