When I was a student at the University of Central Florida, Hurricane Charley hit and caused some pretty intense damage on campus. The UCF gym was affected pretty badly and for months students didn’t have access to the amazing workout facility.

UCF worked to move weights into other rooms around campus, but everything felt very out of whack and I began limiting my workouts to group exercise classes since they were well organized. Spinning was my favorite! (This was also during my “cardio queen” phase, so I wasn’t too bummed out about not having access to weights at the time.)

This morning I took a spinning class and remembered why I liked it so much. Spinning really is such a great workout. Talk about sweaty!

Our gym apparently spent some dough on some snazzy new spinning bikes! I’ve never seen anything like them. 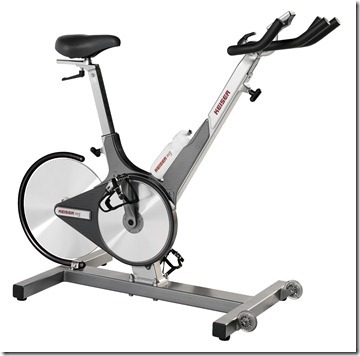 At first the bikes looked totally normal, but after adjusting my seat and hopping on, I noticed that there wasn’t a nob to rotate to change gears, but a little silver thing to tweak up and down that altered the resistance. 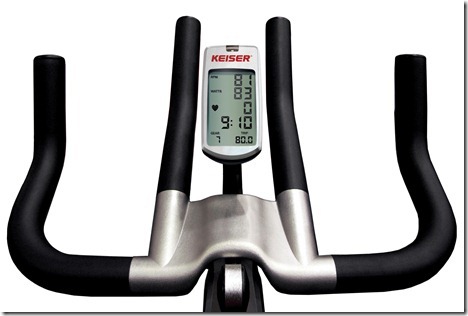 (It’s the silver piece right below the handlebars.)

The bike was also equipped with a computer that told riders the following information:

Knowing my RPM and resistance level was incredibly helpful because the instructor would use it as a reference point, saying things like, “Your RPM should be between 90 and 95.” I’ve never really had a direct measure of my work effort in spinning before and loved having a way to make sure I was working in the zone I was supposed to be in. It was also neat to see how “far” I biked at the end of the 45-minute class.

It made me think that taking a treadmill class that did something similar would be really cool. I’m not sure how a gym could work that out since treadmills are usually located with all of the other cardio machines, but I think a group treadmill class would be awesome! I’d love to tackle treadmill interval workouts and intense incline walking with other people by my side, motivating me to kick my booty!

Breakfast this morning was the usual egg, cheese and jelly sandwich. 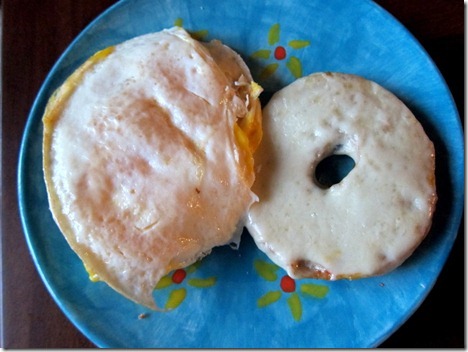 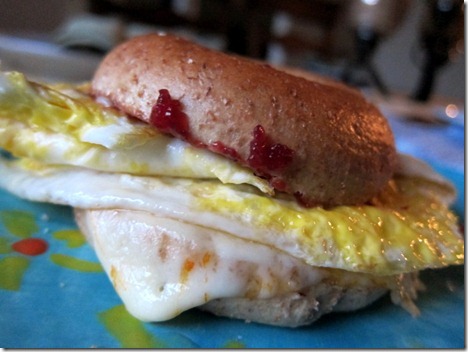 I are my breakfast at the kitchen table with a hot mug of Georgia pecan coffee. It’s a rainy morning in Ocala, so eating a warm breakfast sandwich and sipping on a steamy mug of coffee felt oh-so-cozy.

Just a little head’s up that the following book reviews were added to the Still Missing review page yesterday:

I was off my rocker earlier in the week and posted my review early, so these blogger reviews were sent my way after my review was published. Check ‘em out!

No Marathon on the Books

To avoid any confusion over yesterday’s post, I just wanted to let you guys know that I am not planning on training for a marathon (nor is my relationship with Ryan on the fritz). Those were just two examples I used for the whole “yes but/ yes and” analogy. Sorry to disappoint my running friends out there and any evil little rascals who may be rooting for the big Fagan family break up of 2012. 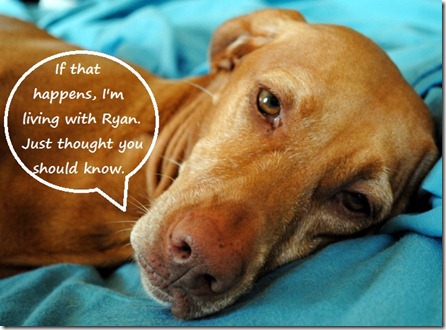 I will not be running billions of miles and Sadie will continue to hog a bed shared by her two loving humans.

In addition to the treadmill class I mentioned above, I would love some kind of a swimming group exercise class that centered around games like sharks and minnows, water polo, water volleyball, Marco Polo or something of the sort.