Navigation
We’re halfway through the week, friends. How are you doing? I was in a m-o-o-d on Monday and thankfully found my way out of my funk by Tuesday. I blame the rain that stuck around all morning on Monday and prevented me and the boys from getting outside which I’ve come to realize is crucial for my sanity while we’re all holed up at home. The boys love being outside, I love it, Sadie loves it and we were back in action with plenty out outdoor fun on Tuesday. Oh happy day!

I woke up on Tuesday morning at 5 a.m. and made myself a cup of collagen coffee to sip on with a sweet potato muffin. I then dove into my devotional and cranked out about an hour of work before joining Ryan in the garage for a workout.

I kept things short and sweet and was in and out of the garage in less than 30 minutes. I grabbed a quick shower, threw my hair up and headed into Chase’s room where I found him getting dressed and waiting to begin the day with some story time. Ryder joined us shortly after we were done with a couple of chapters of a Merlin Missions book (we’re re-reading the series at Chase’s request) and then we all headed downstairs for breakfast. 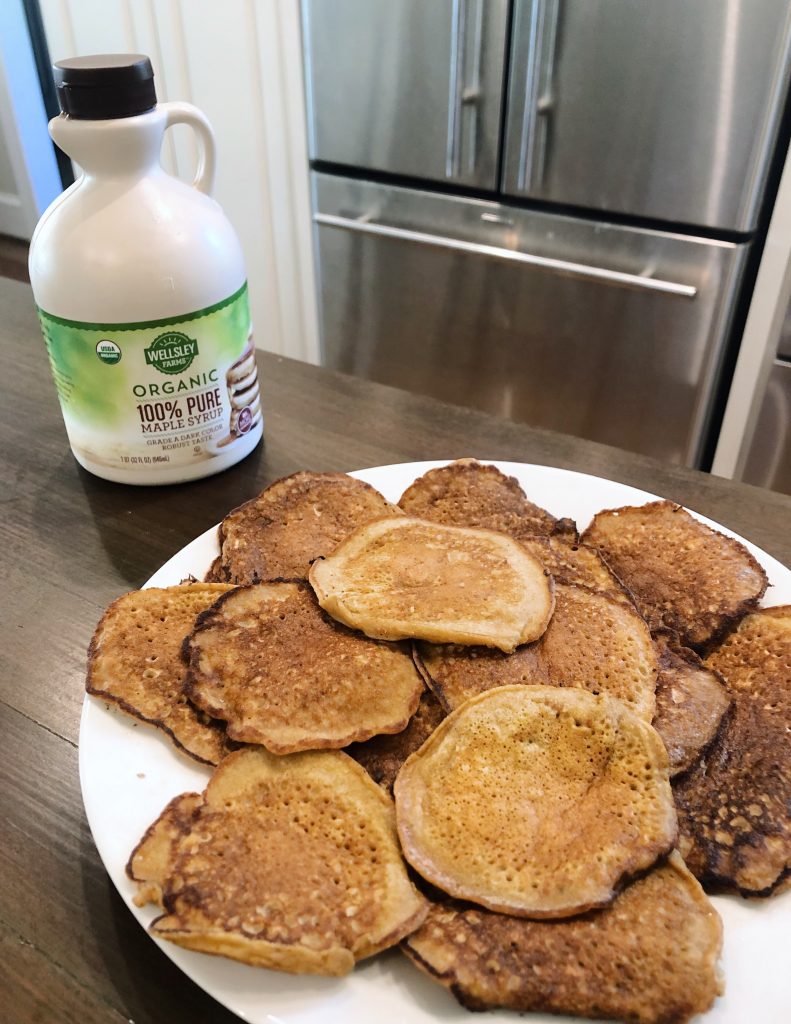 The boys played while I whipped up some pancakes for all of us. I followed this recipe for sweet potato pancakes from Ambitious Kitchen since I had some canned pureed sweet potato leftover from a batch of chocolate chip sweet potato muffins we made over the weekend. The boys loved them the last time I made them so I knew they would be a hit again and we were all happy campers! (I omit the chai seasonings in the recipe and just use a little more cinnamon.)

After breakfast, the food processor ended up serving as our morning entertainment. The boys loooved loading veggies into the processor and pulsing them around. (The veggies were for the veggie-packed meatloaf you’ll see below.) 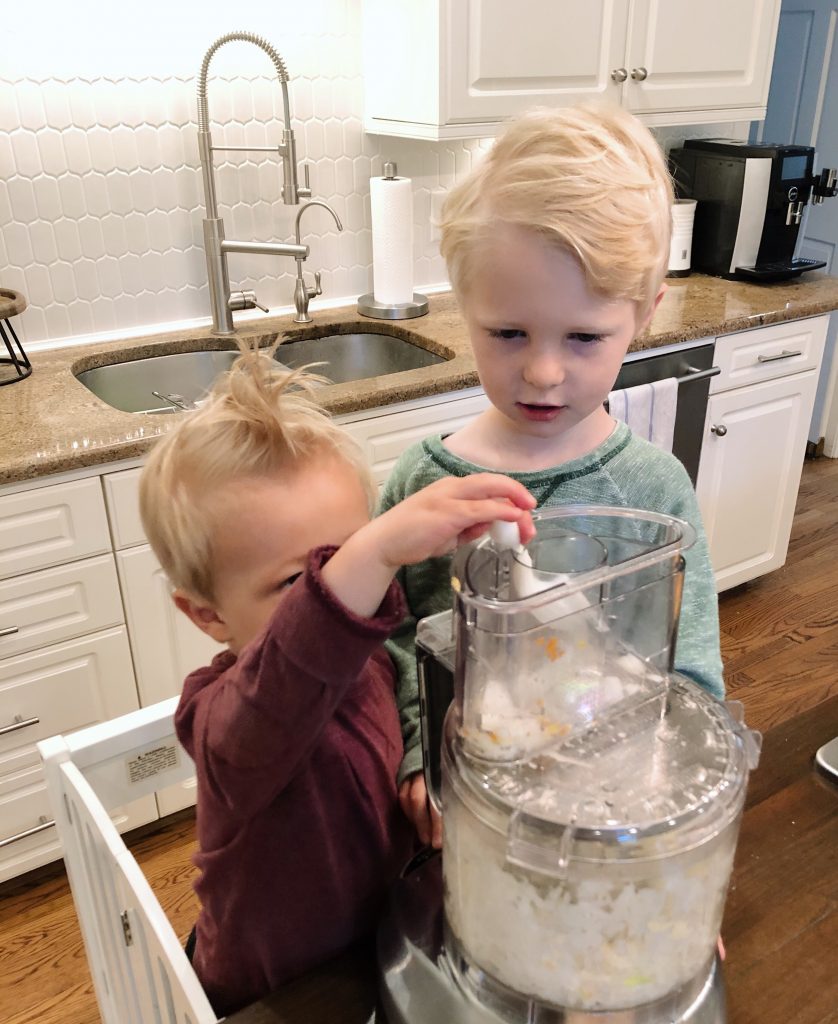 We also made a batch of energy bites with dates, pecans, peanut butter, honey and oats. (I didn’t follow a specific recipe, but my ingredient ratios were similar to the ones in this recipe for Chocolate Superfood Energy Bites. Just omit the cocoa + greens powder and add oats in their place + honey to taste.) 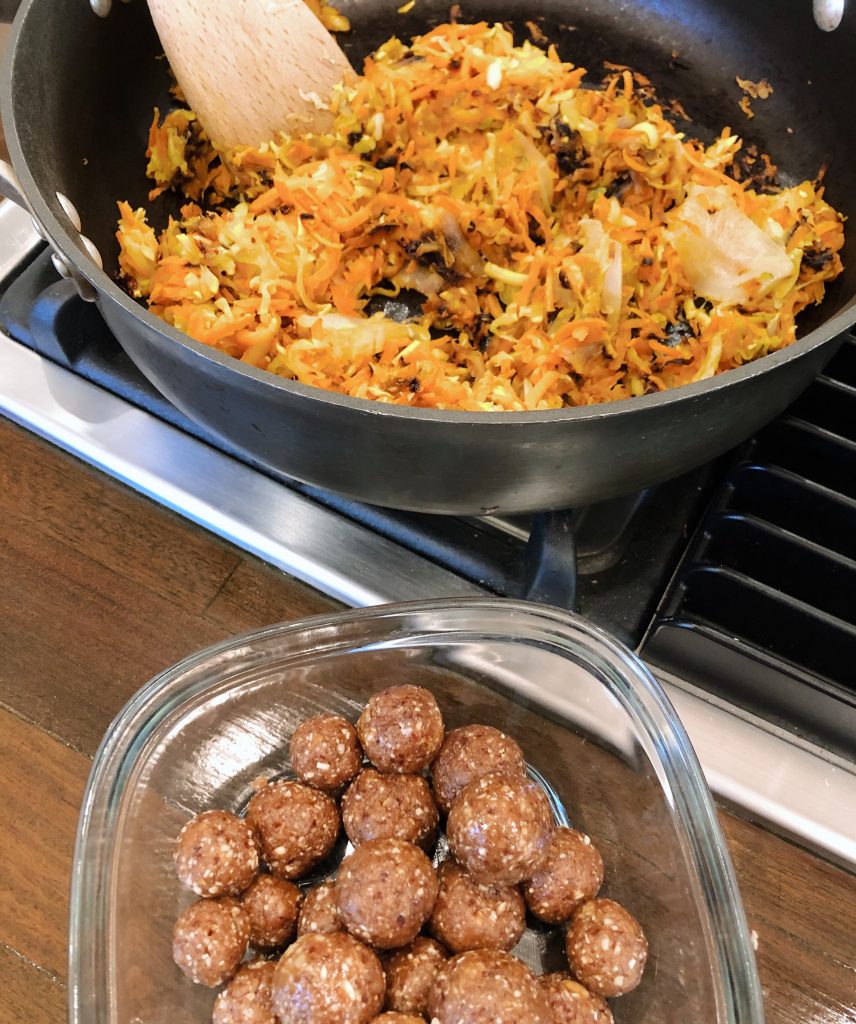 The boys then played inside for a bit while I did a little more food prep and straightened up the kitchen and then we made our way outside.

Ryan and I recently gave Chase his first “big boy bike” and it’s been the biggest hit! He stuffs Lizardy, his little stuffed animal friend, into the water bottle slot on the back of the bike and away we go! 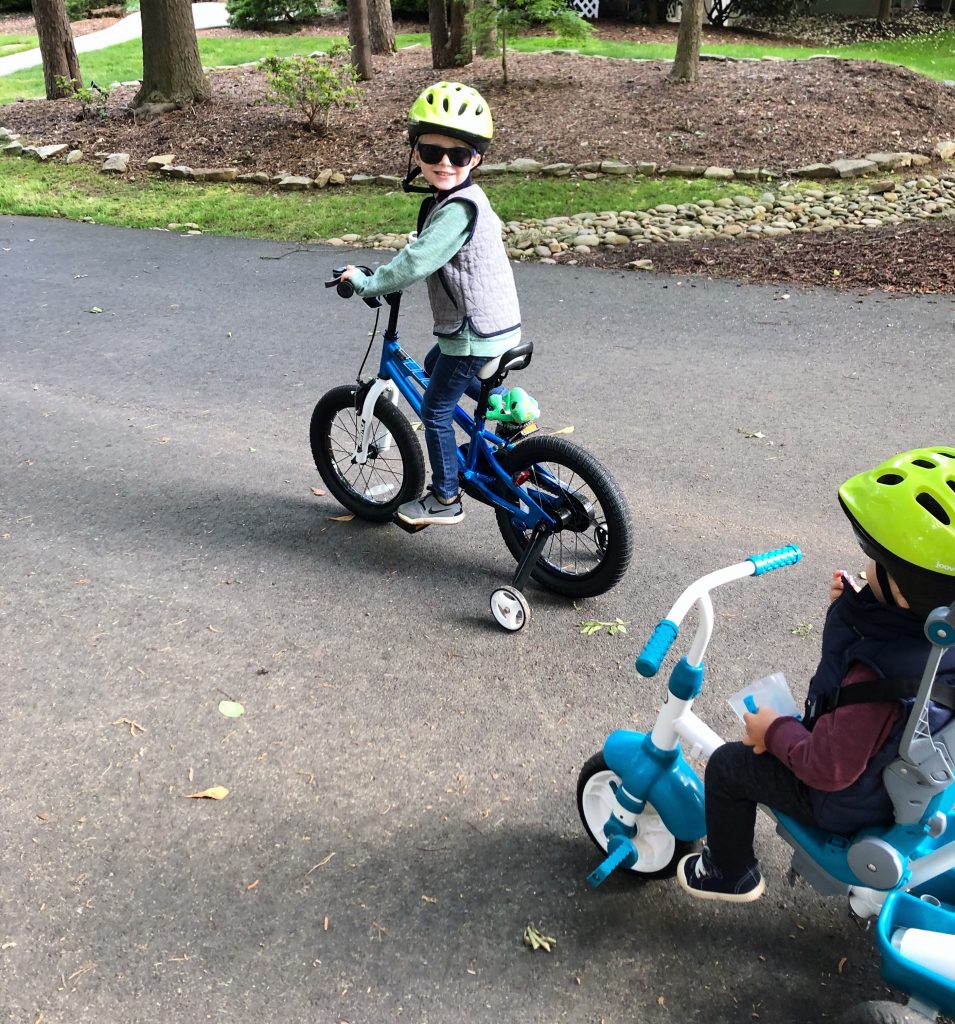 Super random fact about Lizardy: He’s actually a stuffed version of the Geico lizard. A nice man working for Geico gave it to Chase when the two of us were at the office after I got in a car accident a few years ago. He gave it to Chase while I was filling out paperwork and I’m sure that man had no idea this lizard would become one of Chase’s most treasured stuffed animals. Chase now freaks out and yells “LIZARDY!” whenever he sees a Geico commercial, a Geico billboard, etc.

I pushed Ryder along in his convertible trike as I walked Sadie and we made our way to a local marina where the boys love to run around in the grass and look for turtles, ducks and fish. 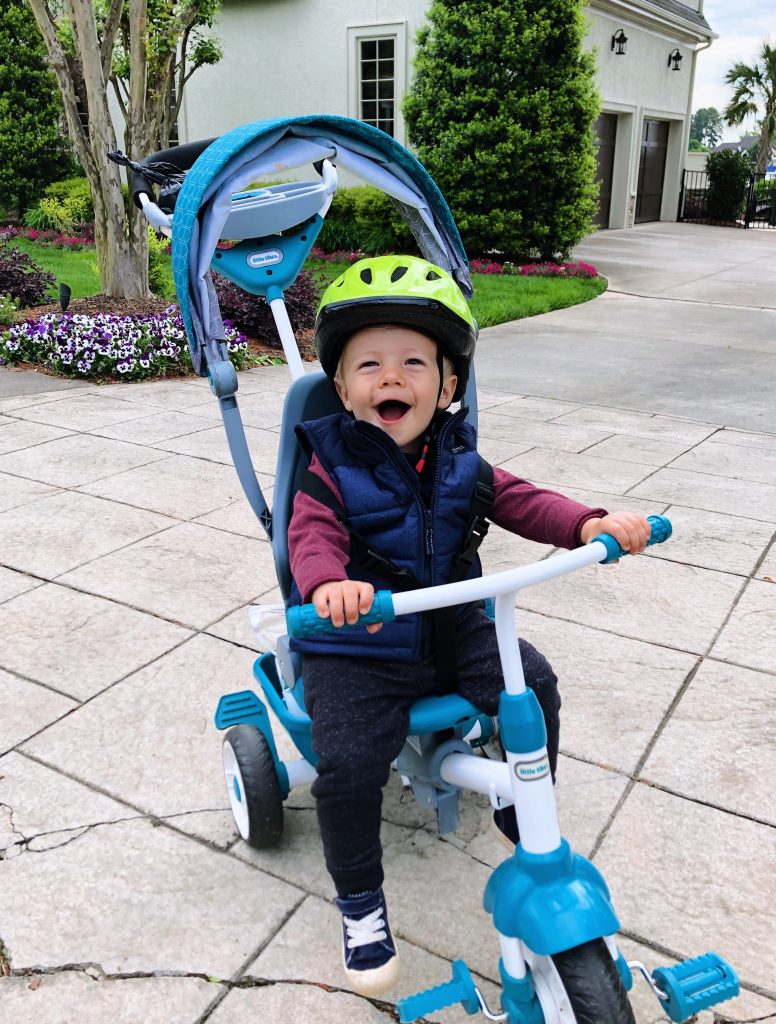 I packed some toys for them to play with and we stayed at the marina for quite a while since they were having a blast and Sadie seemed to enjoy putting her butt on me as usual. 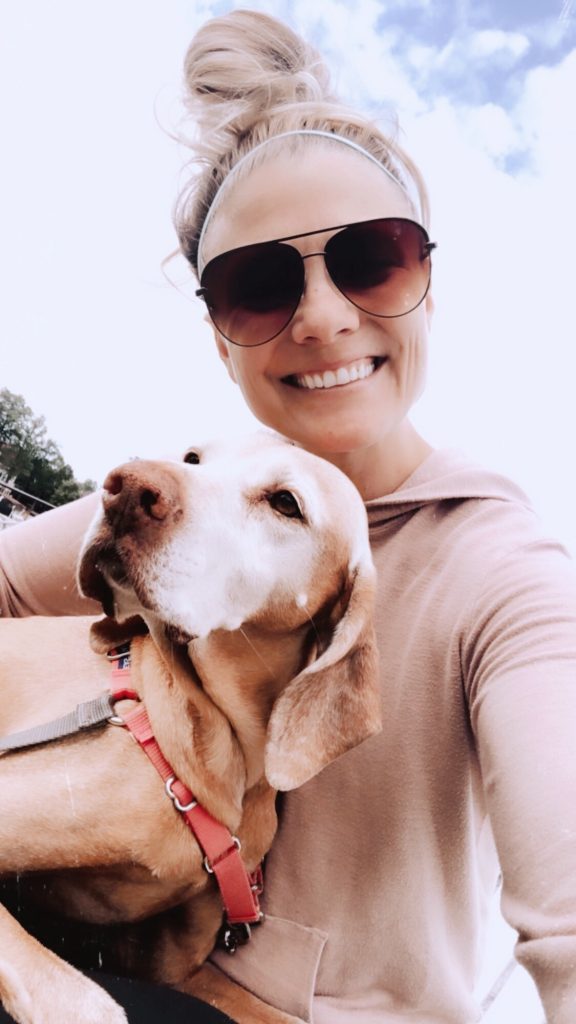 By the time we made it home, Chase was all psyched about the idea of searching for worms and slugs so that was the next adventure on the agenda. (He pretends to be “Creature Man” when he searches for/rescues/plays with/”helps” various creatures. Ryder’s version of “Creature Man” that I shared on Instagram yesterday cracked me up!) We headed into the backyard after I put a veggie-packed meatloaf and potatoes in the oven.

My initial plan was to save the meatloaf for dinner and whip up some sandwiches for lunch but the meatloaf was calling to me and ended up smelling too good to resist! I based our meatloaf off this recipe from Jen’s blog and only made a few minor substitutions. (I swapped the turkey for ground chuck from Evan’s Family Farm, yellow squash for the zucchini and Italian-seasoned breadcrumbs for the panko.) 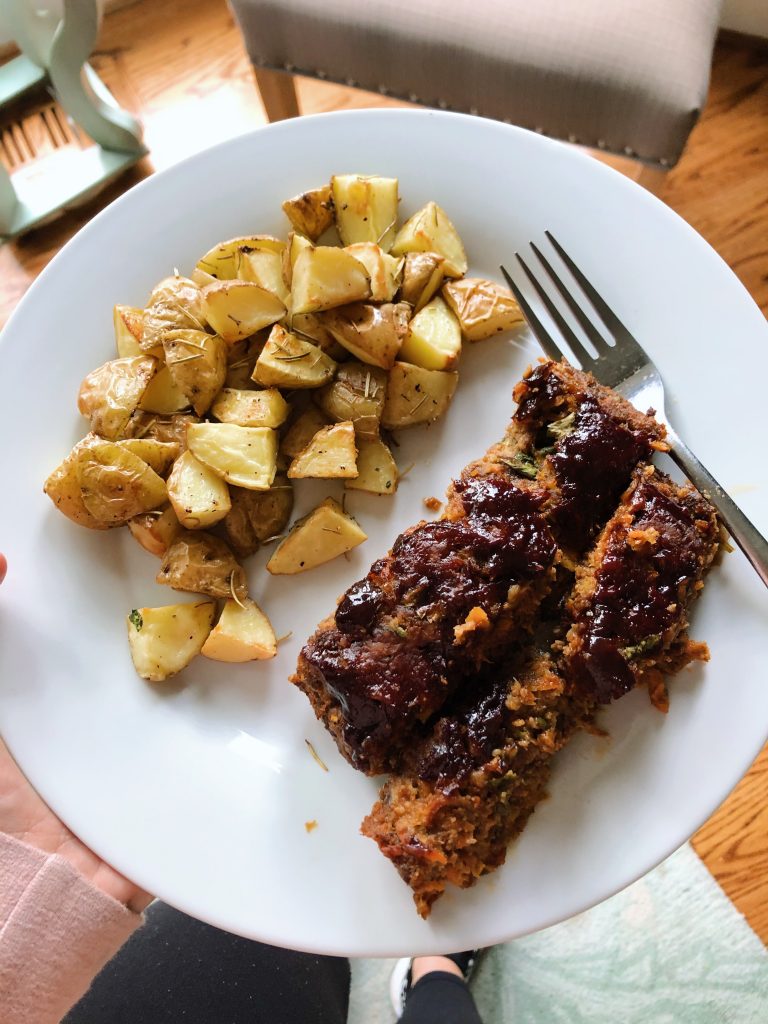 The meatloaf was a slam dunk!!! It was absolutely fantastic and the veggies added flavor but were pretty much undetectable. The best part? Both boys ate and loved it! (Chase didn’t like the glaze on top, but that was easy to work around.) As for the potatoes, they were simply tossed in avocado oil, garlic salt, rosemary and pepper roasted at 400 degrees until they were tender and slightly browned.

Eventually I changed the boys’ shirts because they had a little too much fun washing their hands before lunch and then I got Ryder down for his nap. With Ryder sleeping, Chase and I had the chance to dive into “preschool time” together and went through the short list of (optional) assignments from his teacher. It’s bug week for Chase’s class this week which is right up Creature Man’s alley! 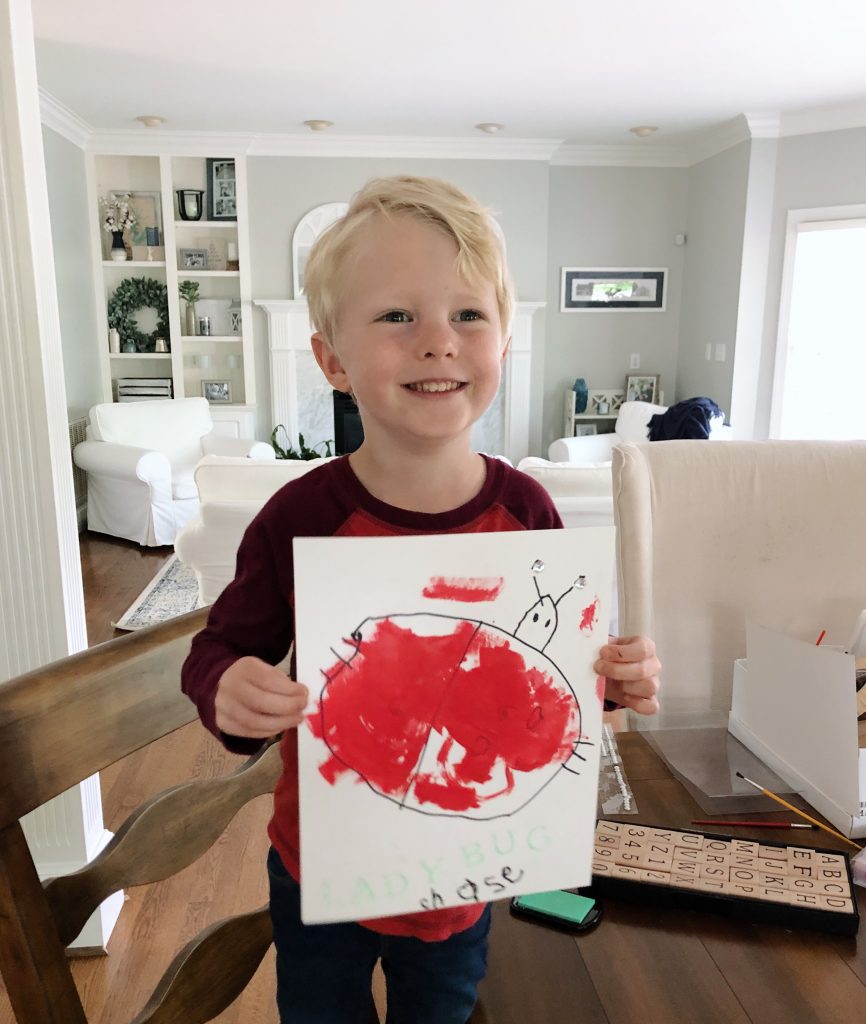 We also did a little sight word scavenger hunt in our screened-in porch! 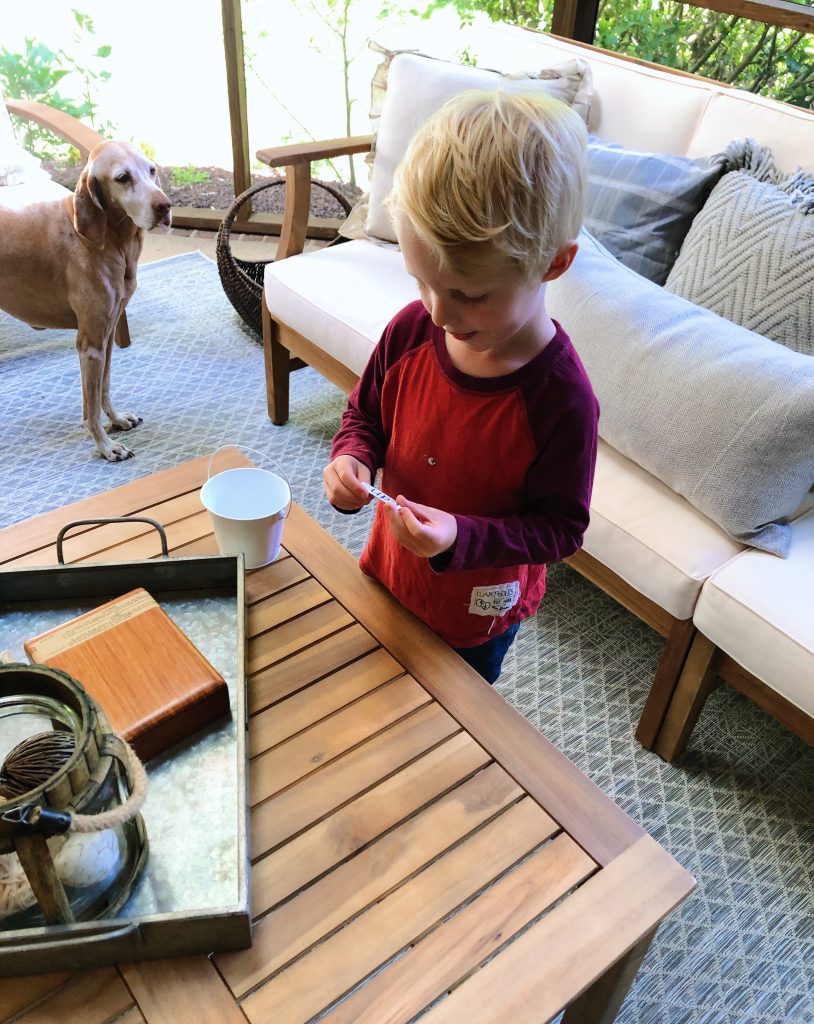 After his school activities, he settled next to me on the couch with his very first kid’s podcast! You guys, I am SO darn excited about this discovery!!! Last week, I received a sweet DM on Instagram with a recommendation to try The Alien Adventures of Finn Caspian podcast for Chase since he loves his audio books. Episodes are 20-25(ish) minutes and Chase was all-in from the the first episode!

While Chase listened to the first two episodes of his new podcast, I worked on my computer until Ryder was up and ready for action. We spent the rest of the afternoon playing outside around our house and then Ryan joined us for some more outside shenanigans once he was done with his work day.

By the time dinner rolled around, I was not about to spend a ton of time in the kitchen again, so dinner looked like mashed up leftover meatloaf from lunchtime stirred together with spaghetti squash. 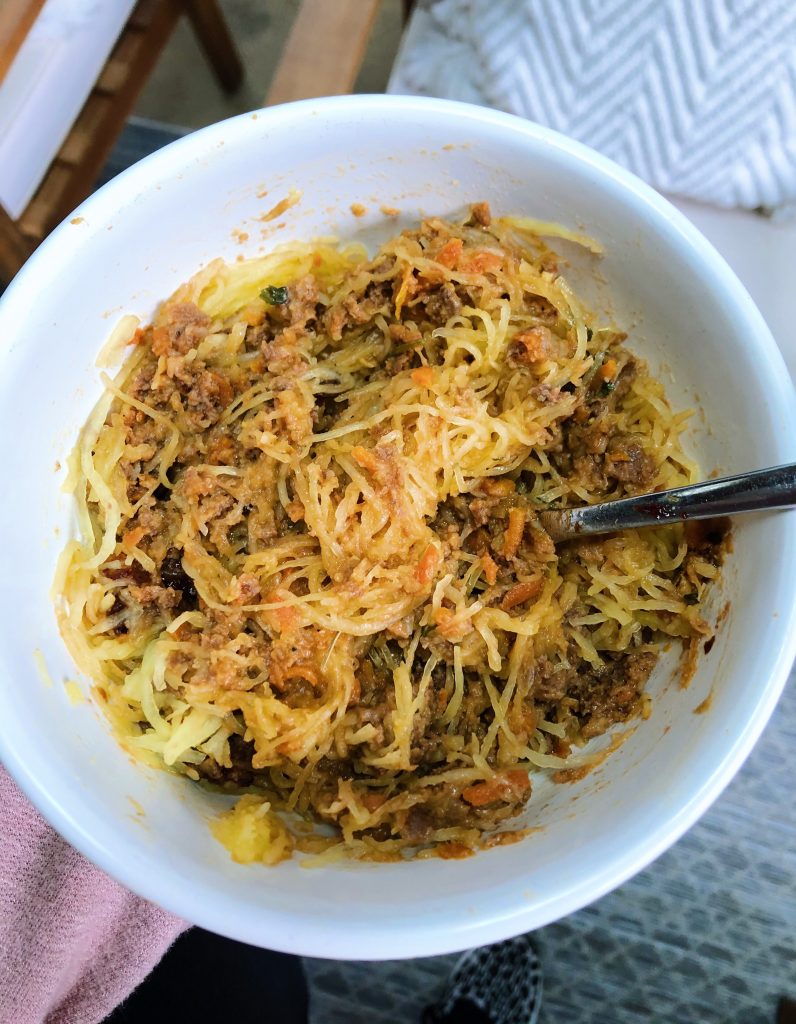 Plus some fruit salad on the side!

After dinner, we made our way upstairs for bath time and the whole bed time routine. We had the boys in bed right about 8 p.m. and then Ryan and I hung out for a bit before reading until our eyes closed. I’m about halfway through The Weekenders and while it took me a little while to get into, now I’m intrigued by the mystery aspect of the novel and look forward to reading it before bed every night.

I hope you all have a great Wednesday and I hope to see ya back here tomorrow for a yummy new recipe post!

« Baby #3: All the Details (So Far)
Everything Bagel Seared Tuna »