Navigation
Hey, hey, hey! How are things going with all of you today!? I hope you had a great weekend.

With sunny skies and temperatures in the mid-80s both Saturday and Sunday, it felt like the first official weekend of summer in Charlotte!

Early Friday morning I wasn’t sure what the weekend would look like for us since Chase was sick on Thursday but by late Friday morning he was fever-free, energetic and back to acting like his normal self. I’m not sure what was up last week but the 24-hour fever that kicked in on Thursday seemed to pass quickly and our two days of rest at home seemed to do the trick. When Chase woke up on Saturday morning (at 5:45 a.m. – phew!), he seemed 100 percent normal and after double checking his temperature, we figured we were in the clear to commence with weekend fun!

We really wanted to take Chase  to see the new Tyrannosaurus exhibition that opened last weekend at Discovery Place Uptown and after reserving tickets for the 9:15 a.m. slot, we drove into the city to begin our dinosaur adventure. 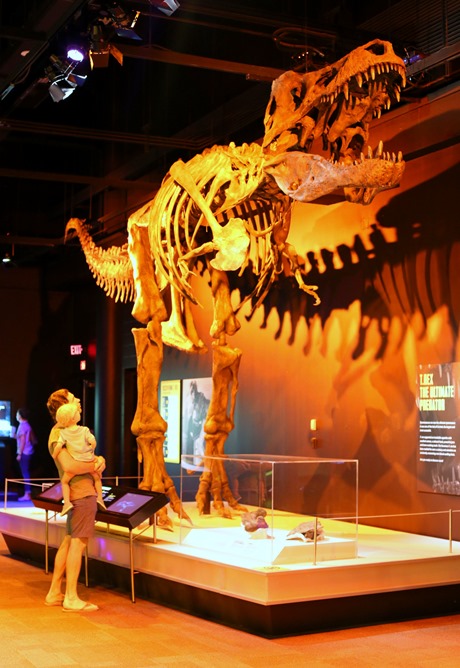 I am one of the biggest fans of Discovery Place and Discovery Place Kids (we’ve been members of both since Chase was a baby and plan to be for years to come) but this exhibition was unfortunately a bit disappointing. I admittedly think a lot of this had to do with Chase’s age, but the exhibit wasn’t very extensive and we were in and out in about 15 minutes. Chase is SUPER into dinosaurs and the T-Rex is by far his favorite so we had really high hopes but I think the dark lights and growling dinosaur noises put him on edge from the beginning.

Chase thought the excavation station was pretty neat and we spent some time using tools to look for dinosaur bones but all in all, Chase was waaay more into the usual Discovery Place museum attractions than this exhibit. 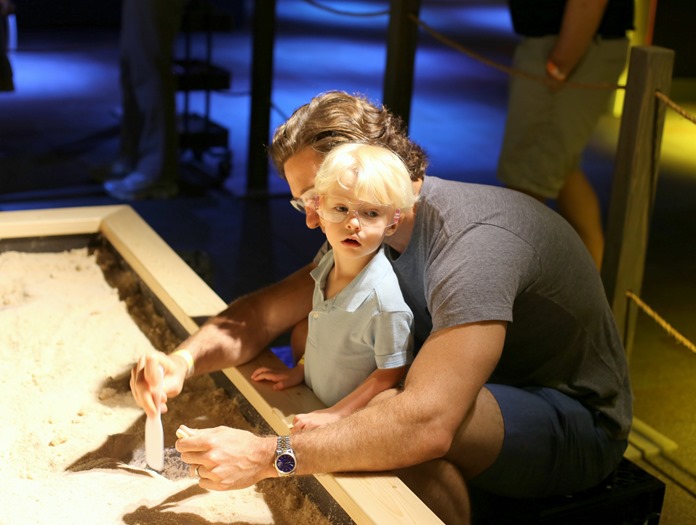 One thing that did impress us was the way Discovery Place included dinosaur fun throughout the museum to go along with the temporary exhibition. Chase loved flipping through dinosaur books and playing with the giant dinosaur toys in the children’s area!

We spent a solid two hours at Discovery Place before breaking away and driving to NoDa, Charlotte’s historic arts and entertainment district, to walk around and grab doughnuts at Reigning Donuts, one of our local favorites. 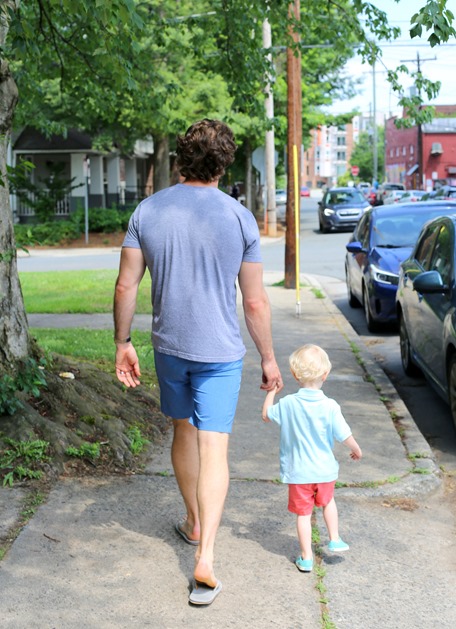 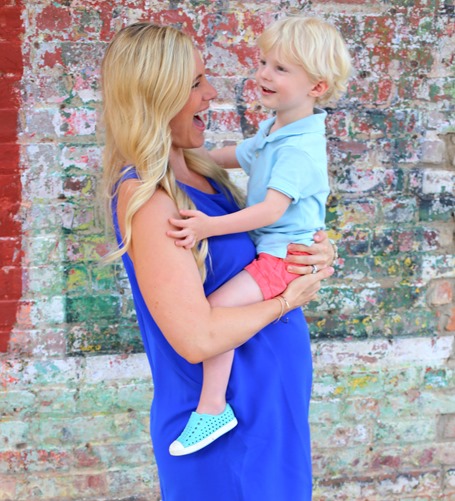 Ryan and I were both victims of social media jealousy and felt left out when we realized we missed National Donut Day on Friday so we celebrated a day late with half a dozen doughnuts. Since doughnuts are one of Chase’s favorite foods, he was more than excited to join in our sugarfest! 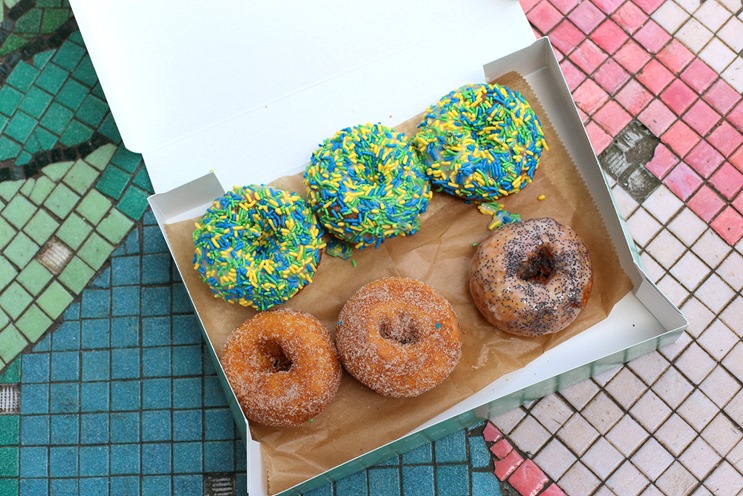 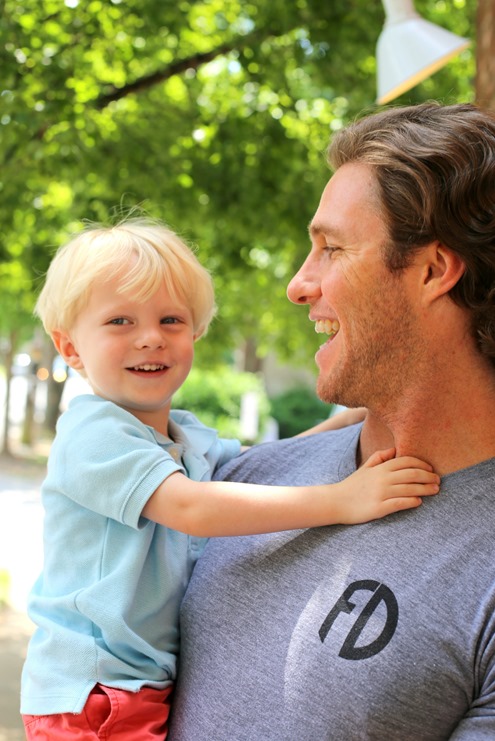 We arrived home just before 1 p.m. and while Ryan settled Chase down for his nap, I immediately headed back out and drove up to Epic Chophouse in Mooresville for my friend Jess’ baby sprinkle. Jess is due with a baby girl at the end of July and it was so much fun to celebrate her little one on the way, dig into delicious food and chat with some of my friends. It was quite dark in the restaurant so I didn’t snap any pictures that turned out well but it was a beautiful sprinkle!

By the time I made it back home, Chase was up from his nap and Ryan, Chase and I did a little dinner prep for the birthday dinner we were hosting for our friend Ben. We made a big spread that included marinated flank steak with chimichurri (both recipes are go-tos for us when we host friends and come from Juli Bauer’s Paleo Cookbook), roasted sweet potatoes and broccoli, pico de gallo salad and berries with coconut cream. Plus ice cream for dessert because that’s a nightly necessity for me right now. It was great to catch up with Ben and celebrate his special day!

Sunday morning began bright and early and I kicked things off with a little meal planning while a batch of peanut butter baked steel cut oatmeal baked away in the oven. Once everyone was up and fed, we headed out on a family walk before church. I made sure to bring my favorite basketball along on the trek! 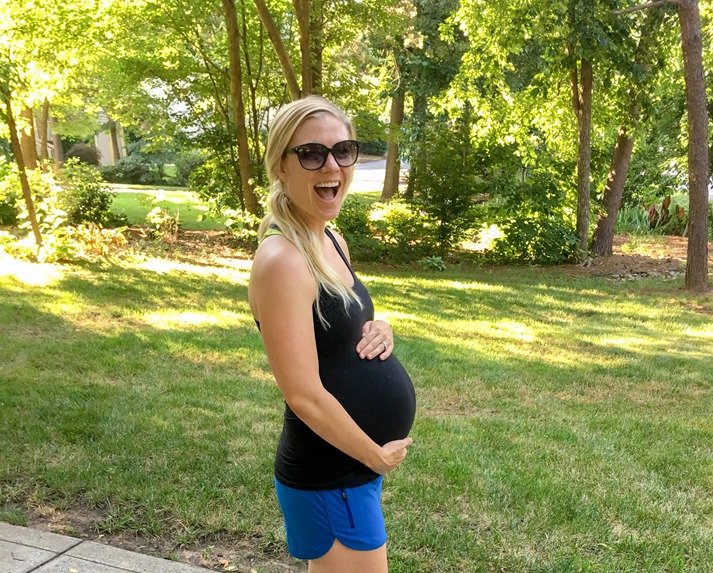 Sunday was one of those random days of pregnancy where I just felt really GOOD. It was so nice and a welcomed reprieve from how I’ve been feeling lately! I wasn’t too tired, no nausea kicked in and I wasn’t overly uncomfortable until I tried to go to sleep at night. It was awesome! (That is NOT a hint for our baby to stay in there for too much longer. I definitely don’t envy late deliveries at all and can totally see myself looking back at this post at 41 weeks pregnant wanting to smack myself! Sunday was just one of those surprisingly good pregnancy days where I didn’t feel as much physical discomfort as usual so it was pretty sweet.)

We made it to the early morning church service and of course I cried when we sang “Reckless Love” because that’s what I do whenever I hear that song. Phew! 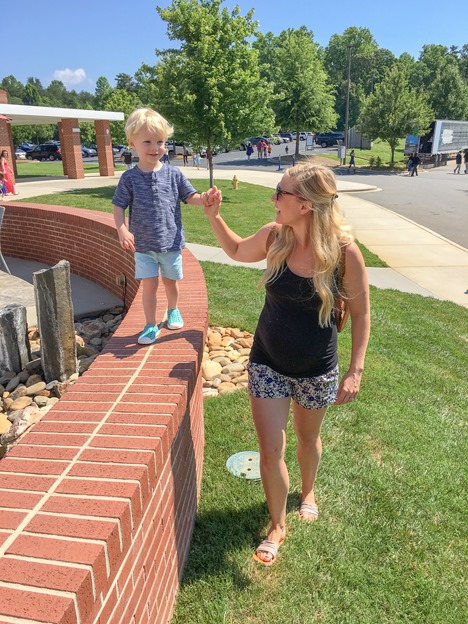 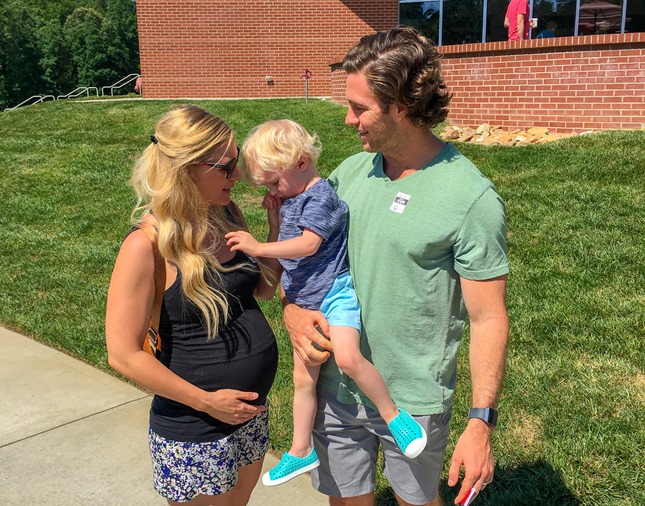 (I think the above not-so-great pic was the first pic Ryan, Chase and I have together with my belly. Yeesh!)

After church, I dropped Ryan off at Ben’s house because they had plans to work out together and then Chase and I drove to ALDI to pick up groceries for the week ahead. Meal planning made the trip a breeze and we arrived back home with a bunch of goodies! 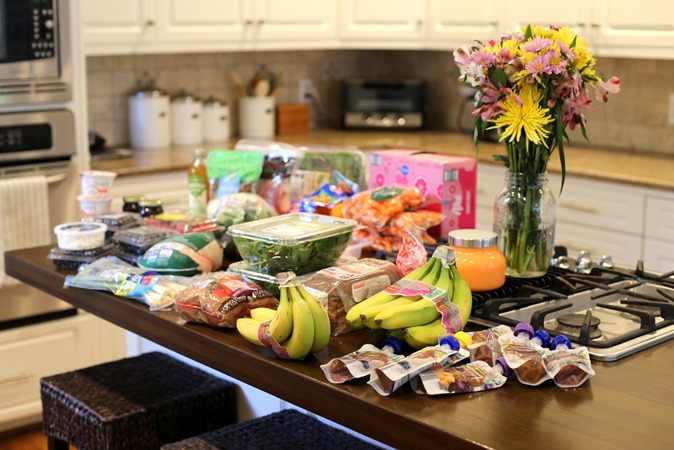 Here’s a glimpse at our meal plan for the week:

Ryan made it home from the gym right before Chase went down for his nap and while he read him some books, I got a jump start on typing up this blog post and responded to a few work-related emails that were nagging me in the back of my mind.

Once Chase was awake, we took advantage of the gorgeous sunny weather and made our way onto the lake for some early evening swimming and boating. 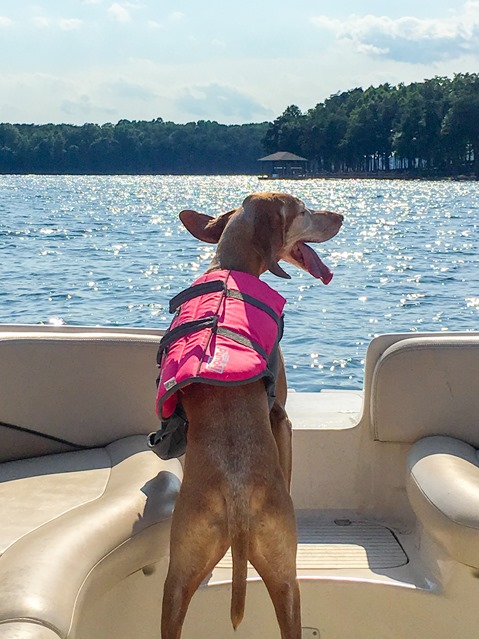 The lake water is slowly warming up and it felt so good to splash around and swim with my crew! 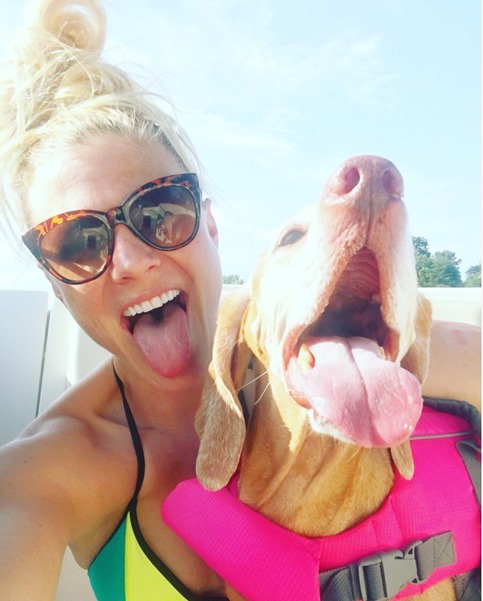 We docked briefly at Hello, Sailor where we filled our boat up with gas and ordered burgers, fries and watermelon to go to eat on the boat as we made our way to a little beach to drop anchor for a swim. 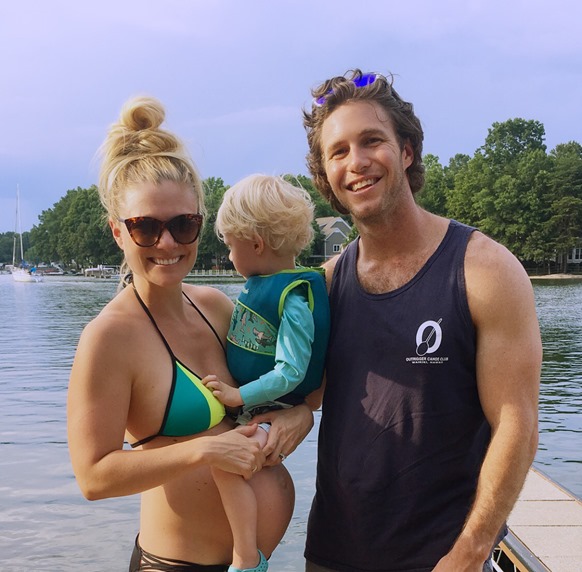 (Can you tell I was on a mission for a better family photo after realizing the church pic from earlier in the day was the only one I have of us with my bump? Ha!)

This was actually the first time Ryan got to witness the glory that is Chase’s new puddle jumper and he was just as psyched as I was the first time I saw Chase have a ball in that thing! 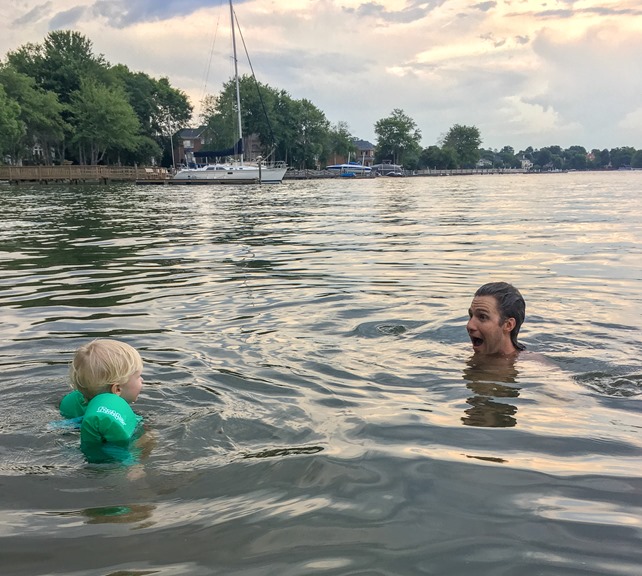 I swear Chase could swim for hours and hours in his puddle jumper and would have had we not needed to get him home to unwind a bit before bed.

Chase ended up going to bed on the later side of the evening so Ryan and I followed suit and climbed into our bed right after we put him down for the night. I continued reading The Identicals by Elin Hilderbrand which I’m 99 percent sure is my first novel by the incredibly popular author. I was in the market for a quintessential summer beach read and based on the Amazon reviews, this one seemed to check all the boxes. So far it’s light and easy and entertaining but some parts make me want to say, “Okay, get on with it already…” I’m about a third of the way through it and am enjoying it enough that I find myself looking forward to reading it at the end of the day, so I’ll keep on keepin’ on.

I hope  you all had a great weekend and enjoy an even better week ahead! Thanks for stopping by PBF today!