Navigation
This weekend was a random one but it was filled with a lot of good stuff. We kicked things off with homemade doughnut holes on Friday night! 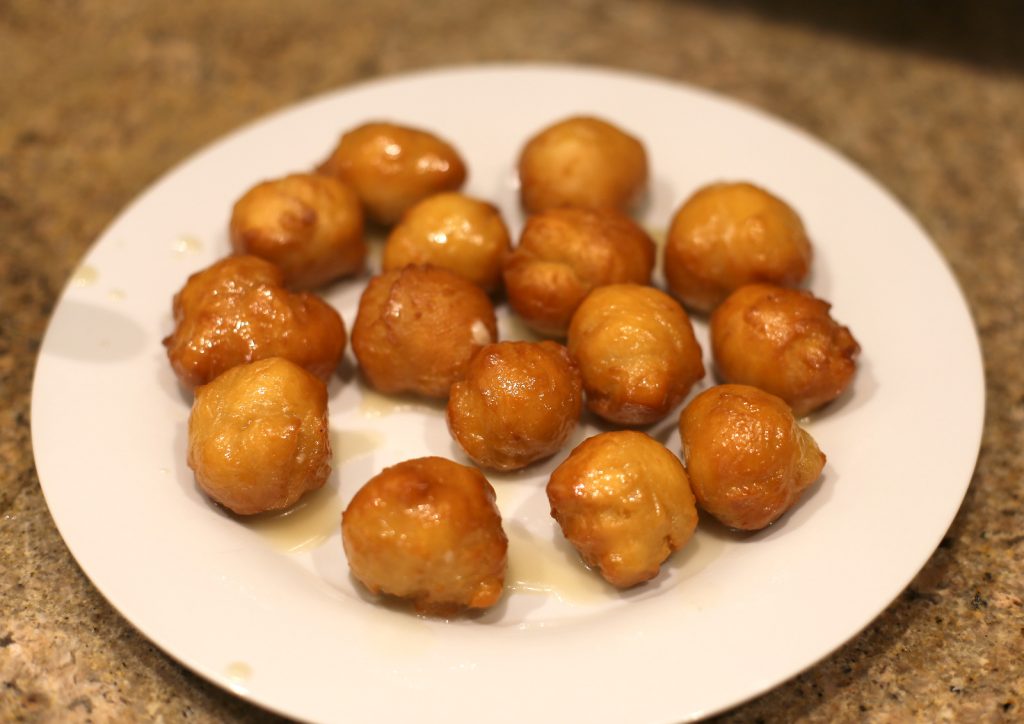 Over the course of the past six months or so, we’ve attempted at least five other recipes for doughnuts in our deep fryer that left a lot to be desired so we were all pumped when we finally found a winner! We made both traditional glazed and cinnamon-sugar doughnut holes and both were fantastic.

We’ve had a bunch of oil in our deep fryer since last weekend when we made zeppoles (one of my top 5 favorite foods) when we had company in town and let’s just say having a deep fryer on hand ready to fry anything at only a few minutes notice has been a little too tempting. Yep, I’m a “healthy living blogger” who made no less than four deep-fried dishes last week. No shame in my game! (For the record, these sweet potato fries were fabulous.)

On Saturday morning, I eased into the day with Ryan and a hot mug of coffee with coconut milk and collagen. Ryan left the house around 7 a.m. to catch a flight to see his friend Terry for the weekend and so I was flyin’ solo with the boys and Sadie. Our Saturday felt a bit like a typical weekday around here and after I whipped up a batch of banana bread protein pancakes for the three of us (<– that recipe is a hit with both boys!), we piled into my car and drove to the YMCA. 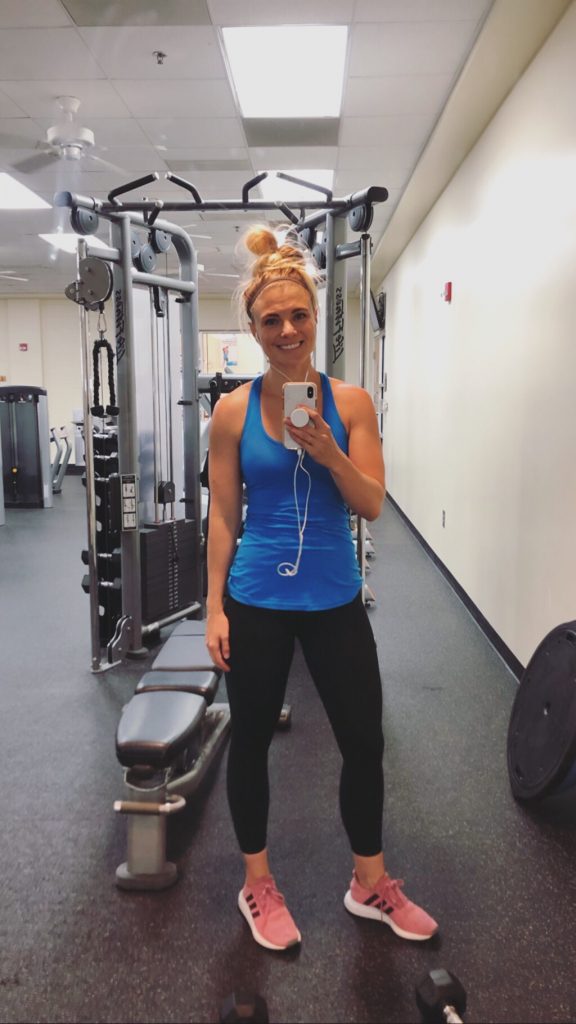 Chase and Ryder had fun in childcare and I completed my Everything One Minute Upper Body Workout and did a little stretching before calling it a day. I was done with my workout in less than 35 minutes and then we were off to the next activity!

Since ISR took over our life last week, we didn’t make it to MyGym at all so Chase was pumped when I told him there was an opening in the 11 a.m. class for kids his age. I dropped Chase off at MyGym (some of the classes include adults, but once kids are a certain age they can go solo) and while he ran around in the WhizKids class, Ryder and I popped into the grocery store to pick up food for the weekend since our fridge and pantry were looking bare.

We were back at MyGym an hour later and then the boys and I headed home and I fed the them lunch before settling Ryder down for a nap. While Ryder slept, Chase and I did some puzzles and read a few books and then he played with toys while I did some deep cleaning around the house. Such a glamorous Saturday activity, huh?

Once Ryder was up, we spent the rest of the afternoon outside. Chase wanted to drive his Jeep and I wanted to take Sadie on a walk so we combined the two activities and headed off to the park near our house. 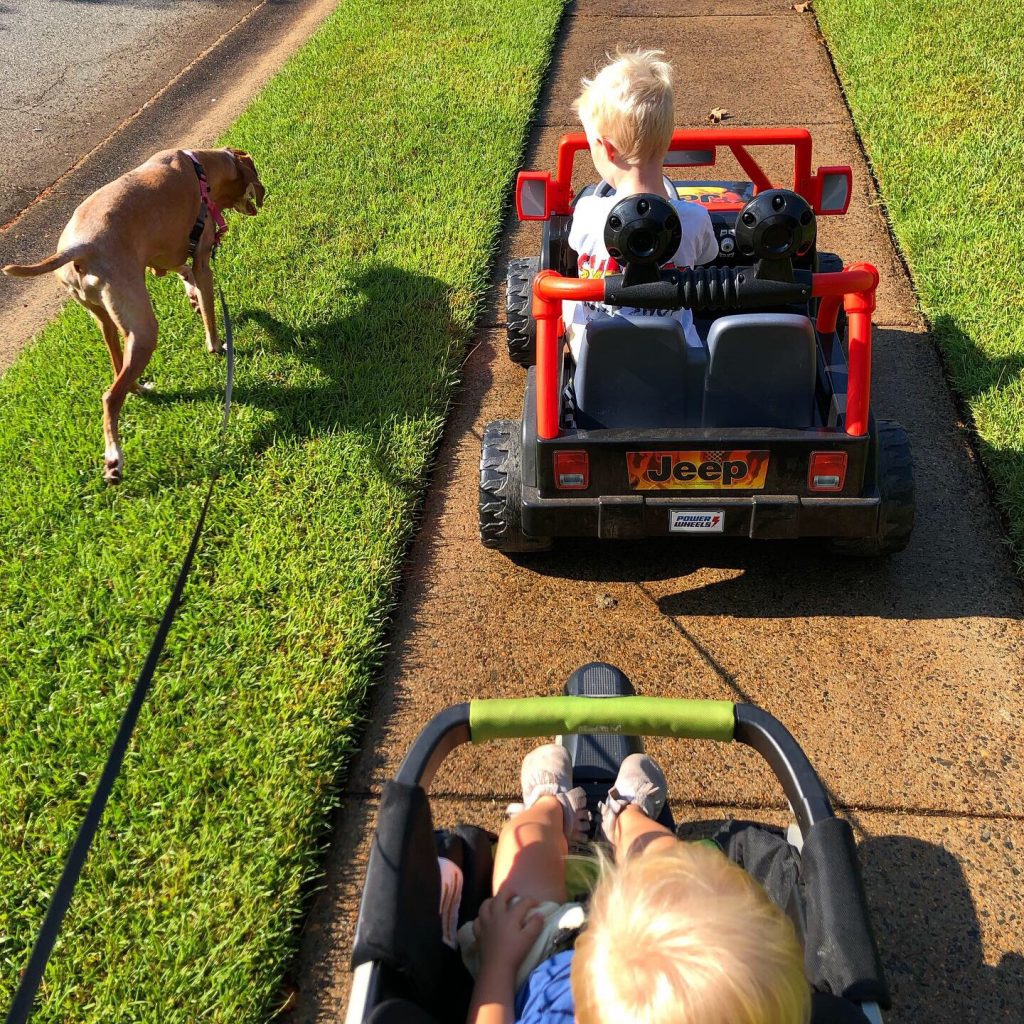 It was pretty hot outside and the mosquitoes at the park were ragin’ but the boys still seemed to have a blast while big sis Sadie kept an eye on things. 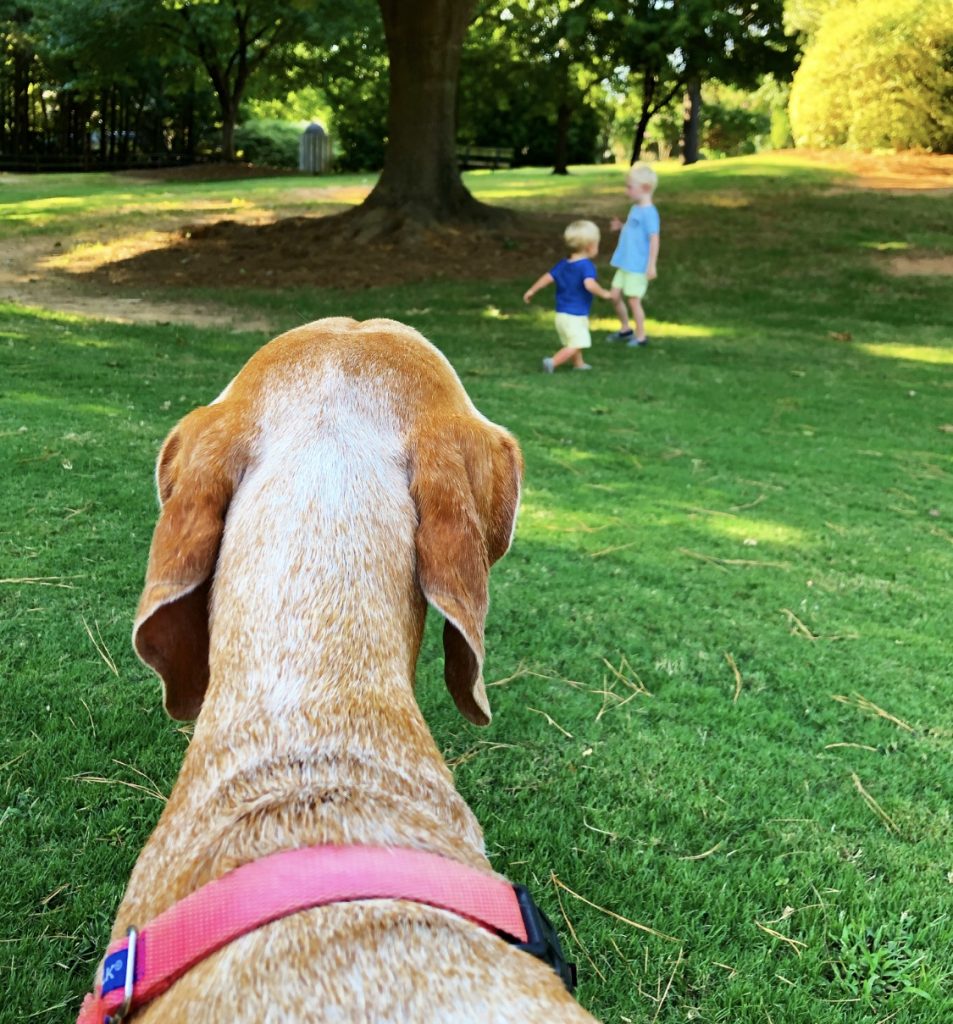 For as much as I’m sure Sadie would prefer to still be the only child in our house, she’s never far from her two brothers and always likes to be a part of the action. She just prefers to show her love on her own terms. 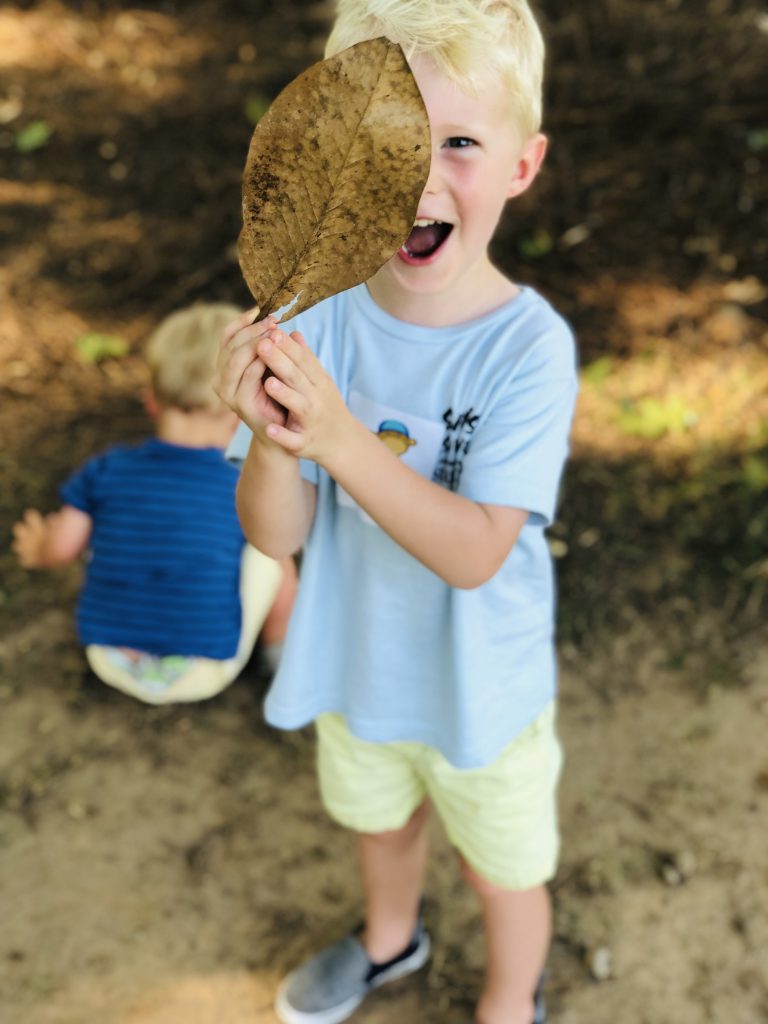 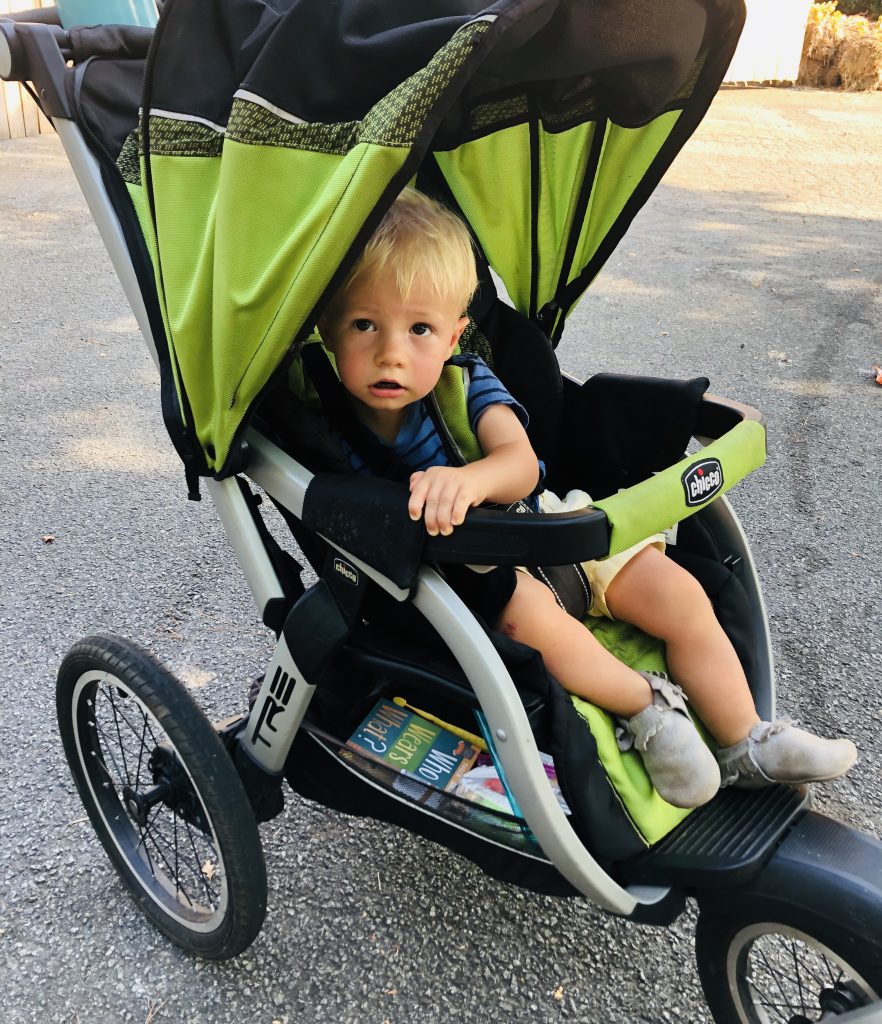 Once we made it home, Chase turned me me and asked if it was the weekend and I knew exactly what that question meant… For the past few months, we’ve eliminated all screen time during the week and reserved weekends for “movie night” which has become a really big deal to Chase. He thinks it’s so special and loves picking out new movies to watch from our local library or his mini DVD collection.

On the agenda for Saturday night: Toy Story 2! He saw the original Toy Story at my parents’ place earlier this summer and was excited when we found the second and third Toy Story movies at our library. An added bonus: Mom likes them, too!

After dinner, we all changed into our pajamas and curled up on the couch for movie night which sounds lovely and cozy until you remember that we have a very active almost 15-month-old in the mix who could not care less about movies. Movie nights with Ryder in the mix look more like answering Chase’s questions about the movies while playing with Ryder/keeping little bro distracted from bothering big bro for 1.5 hours.

Once the movie was over, we FaceTimed with Ryan and then I got both boys in bed before climbing into bed myself for some Saturday night reading.

Sunday began with the early morning service at our church. As usual, I got all emotional and weepy during the singing worship portion of the service but, honestly, it was a really good thing. I have a lot going on in my head and in my heart right now.

We left the service and headed home for an early lunch and naps for Ryder and Chase. While the boys napped, I worked on the computer but also took a break to order some fall clothes for the boys. I ordered a bunch of things from thredUP (a long-time favorite of mine for secondhand like-new clothes) and hope we’re in a better place now for them once the weather gets chilly! I also nabbed some fall essentials and summer clearance items from Old Navy for next year. (I love their shorts for the boys and swear by these denim jeggings for Chase since ALL other jeans are too big/wide for him. And yes, they’re technically for girls but they’re totally unisex in my mind.) Gotta stock up when the prices are low, right?

Once everyone was awake, I suggested a trip to Discovery Place Kids and judging by the excited scream that came out of Chase’s mouth, he was psyched by the idea! 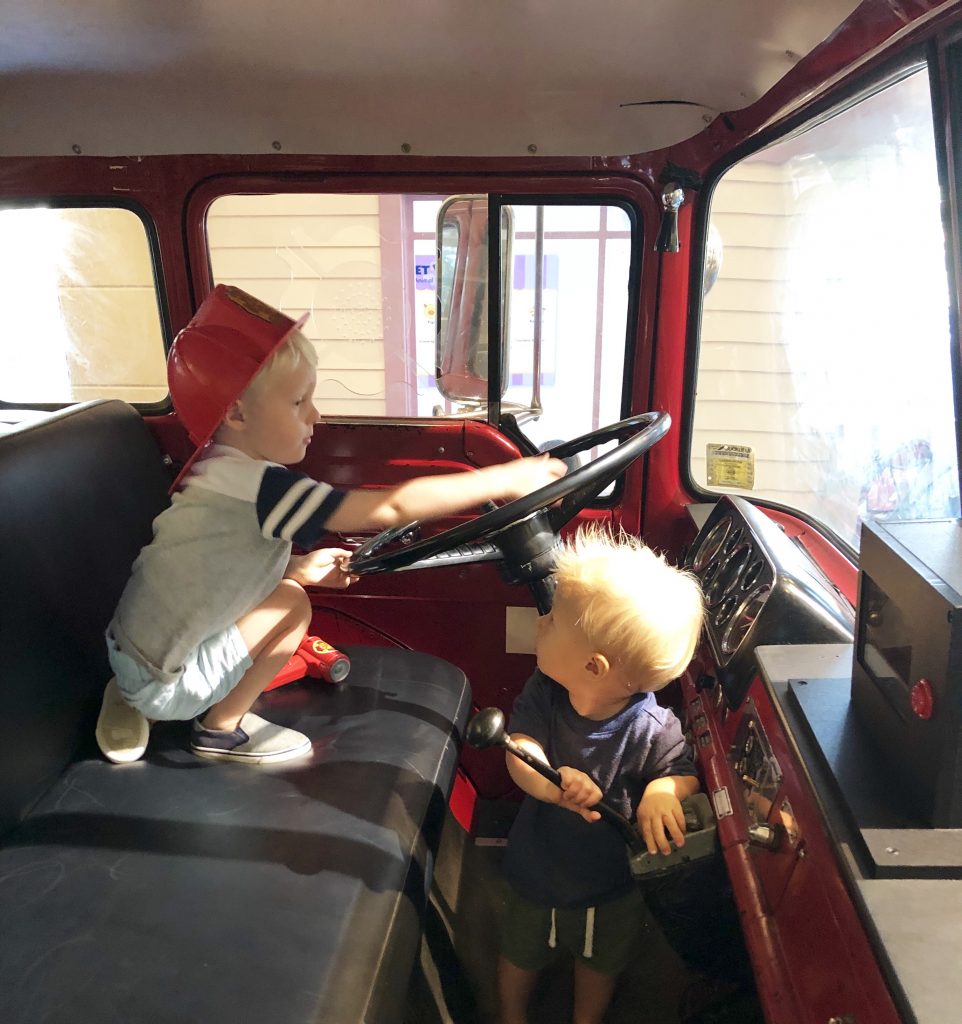 I renewed our membership for the fourth year in a row and then we made our way into kid mayhem where the boys ran around like crazy and I did my best to keep everyone together. Phew!

I texted this picture of Ryder to Ryan that I snapped the second he saw Chase abandon the firetruck steering wheel. 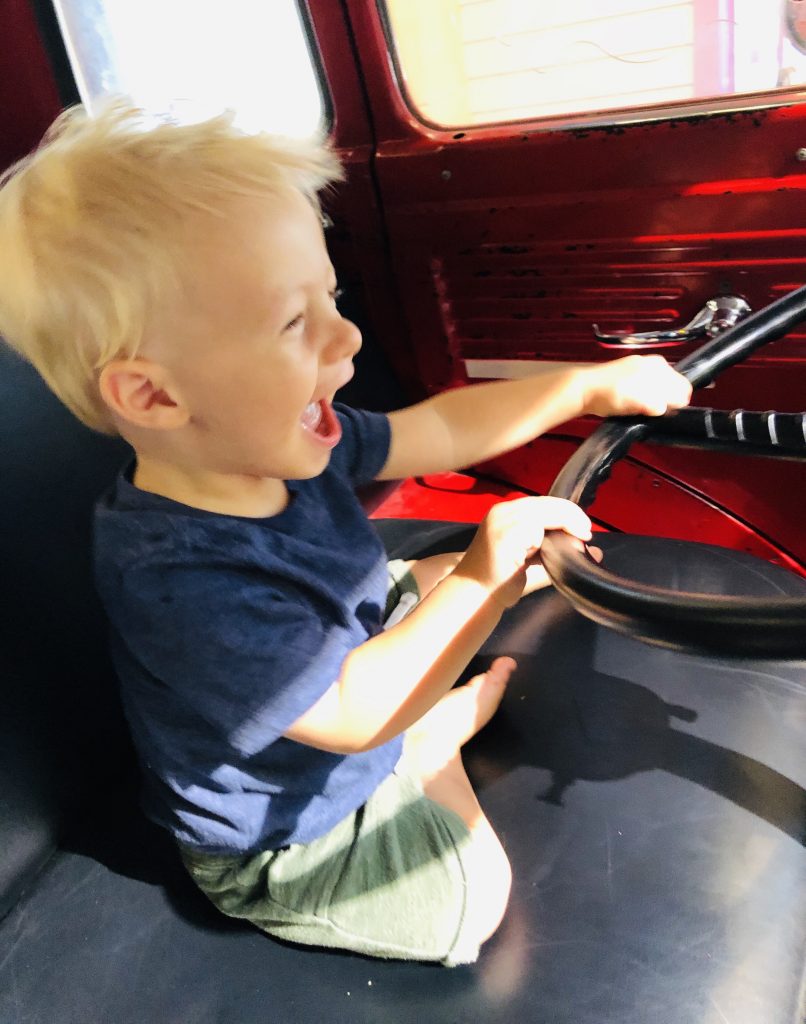 Ryder saw his moment to sneak in a claim his role as fire chief and wasted no time climbing up into the hot seat. Oh happy day!

By the time we made it home, everyone was ready for dinner, so we ate a quick meal, changed into our pajamas and watched Toy Story 3 for our second round of weekend movie night! I think I may need to find some time to take Chase for a mother-son date to see Toy Story 4 in the theaters now that we’ve made our way through all three Toy Story movies this summer.

I managed to have both boys in bed nice and early which gave me time to chat with Ryan on the phone and read in bed before my eyes would no longer stay open. And now I’m hearing Ryder making noise on the monitor so I am off to get this Monday rollin’. I hope you all have a great week!