Good morning party people! I hope your weekend is off to a good start.

Mine is… now. I am usually the first one awake in our household, though Ryan and I seem to both be early risers and are almost always awake by 7 a.m. on days when we can sleep in. It’s sick.

For whatever reason, I was awfully tired this morning and Ryan awoke before me. He assumed I was awake as well and preceded to brush his teeth and get dressed for the gym in our room as I remained in bed.

Now this wouldn’t normally be a big deal and I might be able to sleep through the commotion, but what made it impossible to continue sleeping was a certain furry female who paced across the bed – and therefore my body – as Ryan walked around the room getting dressed. 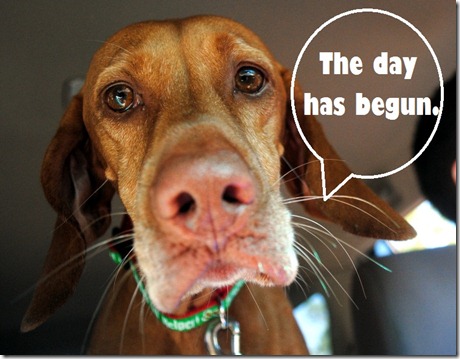 Sleeping in is not allowed under her watch.

Once I was up and forgave Sadie and Ryan for ruining my peaceful slumber, Ryan and I drove to the gym to get in a quick morning workout.

We began with 20 minutes of steady state cardio on the elliptical before splitting up in the weight room.

I ended up doing a scaled-down version of my 1000 Rep Workout before calling it a day.

As we headed home, Ryan was hit with a craving for his favorite hot cakes from McDonald’s, so we made a pit stop at the golden arches. 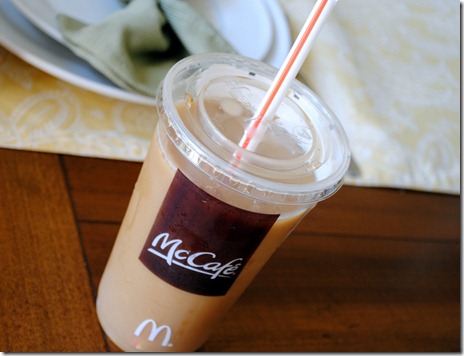 I ordered an iced coffee and a fruit ‘n’ yogurt parfait to eat at home with a bowl of steel cut oats that I pumped up with egg whites, banana and flaxseeds. 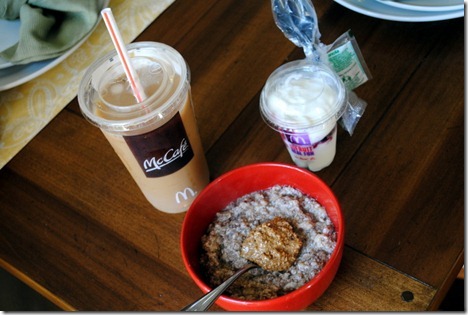 Plans for the day include:

« Your Wedding Dogs
A Visit from Will and Alex »