Good morning and Happy Monday! I hope your weekend was a good one. We spent the past few days enjoying a mix of relaxation and fun with friends!

On Friday evening, Ryan, Chase and I headed over to our friends Lauren and Tony’s house for a cookout! I met Lauren through Burn Boot Camp when we realized our little ones were the same age (Lauren’s daughter Claire was born four days before Chase at the same hospital!) and it’s been so much fun watching our babies grow up together. Chase and Claire had a great time with their fellow baby buddies, Lilly and Ella, and we all enjoyed watching them play in Lauren and Tony’s play room. 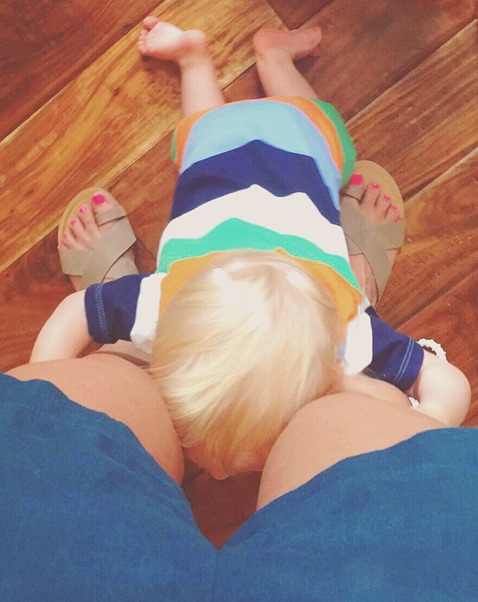 (Pic from my Instagram – Chase is officially in the leg-grabbing stage!)

While the babies played, we enjoyed a delicious dinner of steak and chicken kebabs on the grill with plenty of chips and dip, honey roasted sweet potatoes, veggies and more. I brought two variations of Kristin’s no bake ice box cake for dessert. (I need to share my chocolate rendition with you guys soon because it was so easy and a big hit!) 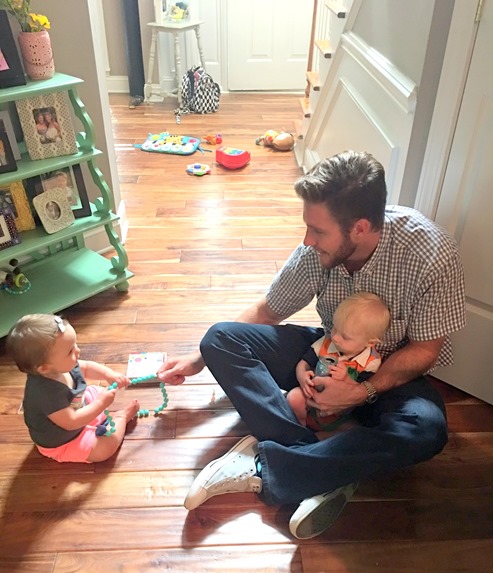 I’m not going to lie, it’s a pretty great thing to have friends who are in the same boat and plan cook outs that begin around 4:30 p.m. to maximize baby playtime to the fullest. Since we’re all on similar schedules, our early bird BBQ worked perfectly and we were able to relax a bit as the kids played for several hours before we headed home to put Chase to bed a little after 8 p.m.

Saturday morning began the sweaty way with a Burn Boot Camp class! The workout of the day incorporated a lot of cardio which is my favorite on a Saturday for some reason. Typically I love strength training most, but there’s something about kicking off the weekend with a sweaty cardio workout that I adore. It’s kind of like the way I would feel about tackling a long run on Saturday mornings when I was training for half marathons. Sweaty Saturdays are the best!

By the time I made it home, Chase was ready for hi s morning nap, so I nursed him and put him in his crib before grabbing a quick shower and hanging out with Ryan for a bit.

I had lunch plans with girlfriends and fortunately Chase’s nap timing worked well, so I was able to feed him again right before I left. While Ryan and Chase enjoyed some guy time, I drove to Luna’s Living Kitchen in Charlotte’s South End neighborhood and met up with a handful of friends, all of whom I met through Pure Barre when Ryan and I first moved to the Charlotte area. 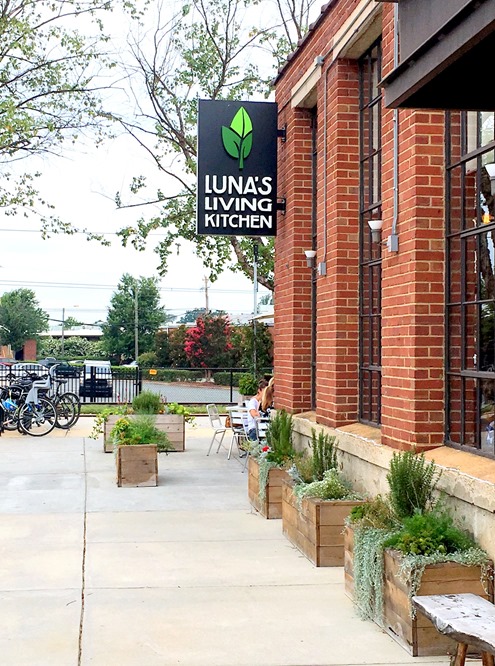 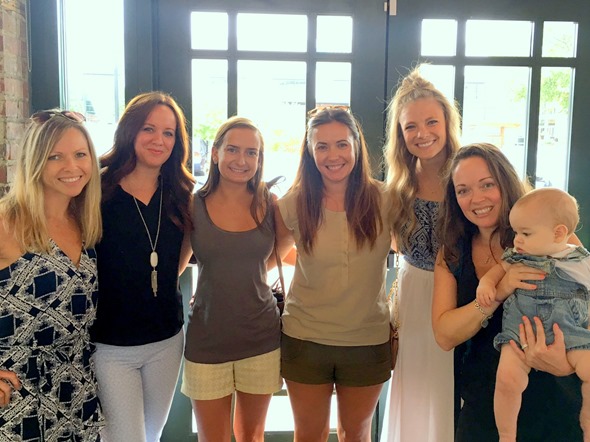 I absolutely love my time with Chase, but it sure was nice to not feel like I was multitasking my way through lunch and I had a blast catching up with friends over Luna’s amazing organic plant-based food. (FYI for any Raleigh readers out there, apparently Luna’s is opening another Living Kitchen location on Fayetteville Street soon! You must check it out if you love quality vegetarian fare.) 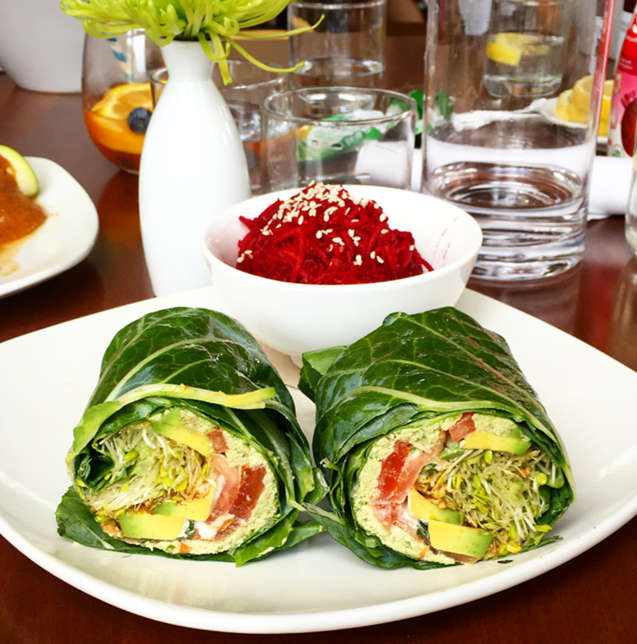 I ordered the avocado and basil collard greens wrap with lemon parsley hummus and cashew sour cream and it was fantastic. I had no problem inhaling every bite and would gladly eat food from Luna’s every single day if I could!

After our long lunch (hooray for quality lunches that last two and a half hours!), I realized I was close to Sunflour and popped in to grab a couple of sweet treats for me and Ryan after I said goodbye to my girlfriends.

I inhaled my oatmeal chocolate chip cookie on the car ride home and Ryan seemed to love every bite of the key lime cupcake I brought back for him. 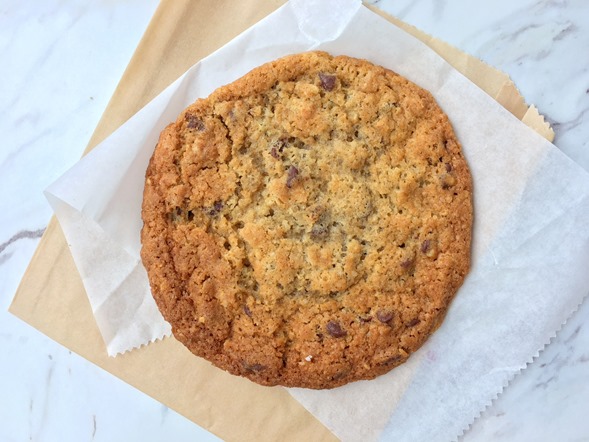 Chase woke up from his afternoon nap within 20 minutes of my arrival home, so we spent the next couple of hours hanging out as a family and swinging on the swing in our backyard. 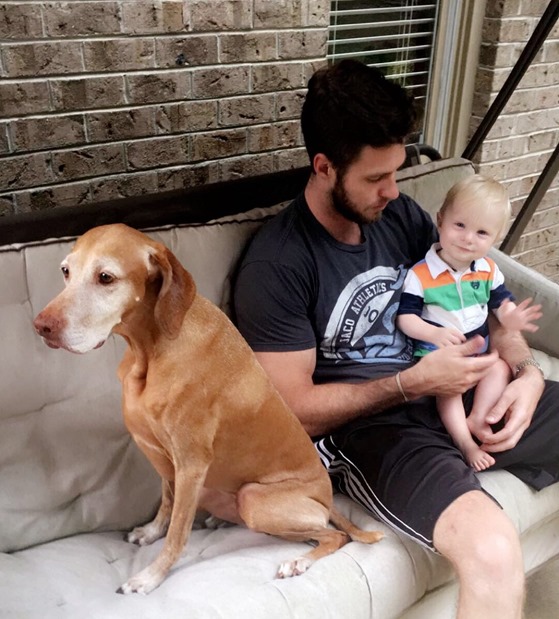 If Sadie looks totally spooked in the above picture, it’s because a thunderstorm was rolling in. It poured for a couple of hours on Saturday night which gave the evening a cozy feel. I love summer rain on nights when we have no plans on the agenda! (And yes, Chase is wearing the same outfit from Friday night. I did laundry on Saturday morning so it went right back on him because it was the first thing out of the dryer.)

Chase ended up tiring out pretty early on Saturday night (I think this was due to a later-than-usual bed time on Friday night), so he was asleep in his crib by 7 p.m. which meant our Saturday evening was a rather relaxing one! At my friend Carrie’s urging, Ryan and I started watching Bloodline on Netflix and made it through the first two episodes. 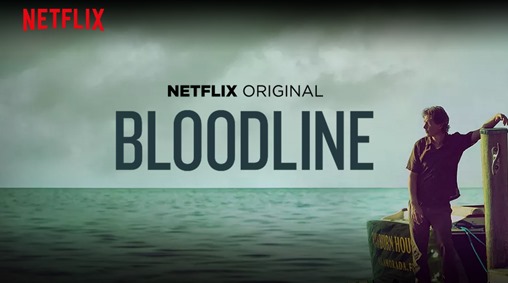 It definitely drew me in right away, though I felt a little stressed out watching it! I kept feeling like everyone was going to murder someone any second. Clearly I am a paranoid drama show watcher…

Sunday began with coffee, meal planning and eggs and waffles for breakfast before Ryan, Chase, Sadie and I headed out on a short two-mile walk around the neighborhood.

By the time we made it home, Chase was rubbing his eyes and in need of a nap, so while he napped and Ryan worked in the yard, I started typing up this blog post and tackled a few work-related tasks on the computer.

Before I knew it, Chase was up again and the two of us had plans with some of my girlfriends and their little ones for a pool play date! 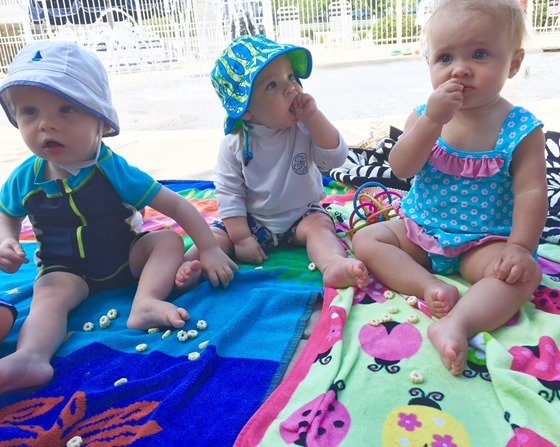 Chase got together with his friends Lilly, Mack, Braydon and Oliver for a picnic with lots of puffs and plenty of poolside playtime.

I love this group of babies and their mamas so much! 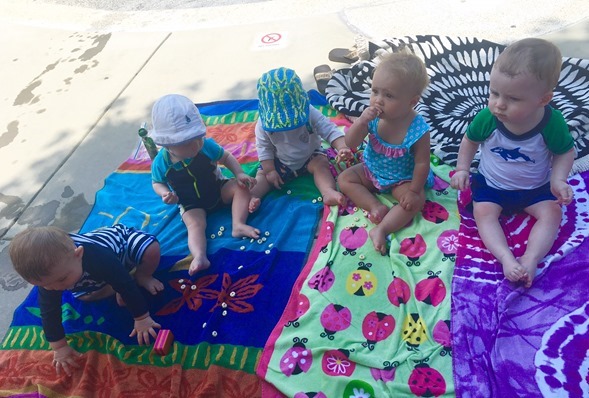 Every time we all get together, I leave our play dates feeling so grateful that I have such a kind and supportive group of women in my life who are going through similar challenges and joys and only want the best for their beautiful babies. Plus, it’s so much fun to watch our little ones change and grow up together!

By the time we made it back home, Chase somehow got a burst of energy, so Ryan and I laughed and played with him as he crawled all around our bedroom exploring and touching everything. I wasn’t sure how the evening would unfold since he didn’t go down for his afternoon nap until close to 4:30 p.m., but thankfully he slept for about an hour before we took a family trip to the grocery store.

The rest of our Sunday night included bath time before bed for Chase and another episode of Bloodline for me and Ryan once he was asleep in his crib.

Our weekend passed by in a flash, but it was a good one. I hope you guys have a wonderful week and a great Monday!