Navigation
Saturday at FitBloggin’ was yet another day full day of informational sessions and fun with blogger friends.

After I awoke on Saturday morning, I decided I wanted to get out and see Baltimore. While I love traveling to blogging conferences, I often leave feeling like the only thing I saw was the inside of a hotel and a few restaurants. I love exploring, so I hate feeling like I’m missing out on seeing what a certain city is all about.

On Saturday morning, I threw on my workout gear and headed outside for a run around Inner Harbor.

I decided to change up my run and incorporated a few breaks where I threw some other exercises into the mix. 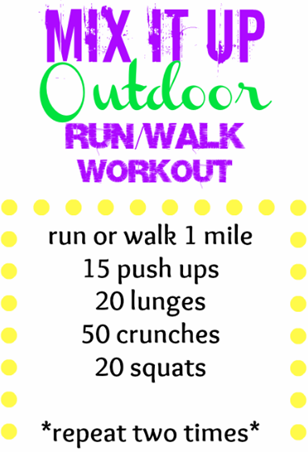 The exercise breaks broke up my run a bit which is always nice.

I love running outside in a new location because there is so much to see! I often play a funny little game with myself when I’m out on a run somewhere new. (Perhaps this should be added to the Weird Things I Do While Running list?) I’ll look at all the nearby houses, apartments or condos and daydream about which one I’d want to live in if I lived in the area and money were no object.

Yesterday, I narrowed my Baltimore dream house down to a beautiful brick building with lots of condominiums. And then I realized they were Ritz Carlton Residences. Naturally. 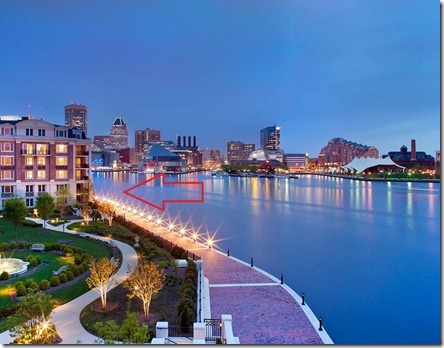 Not sure I’ll be moving in there anytime soon.

After my run and a quick shower, I headed over to the Hyatt hotel for day two of FitBloggin’. 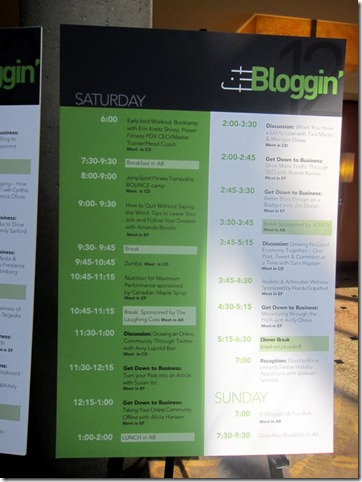 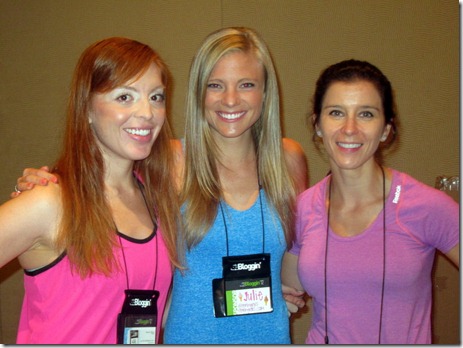 Almost immediately I ran into my sister’s friend Brittney who is a PR rep for The Laughing Cow. 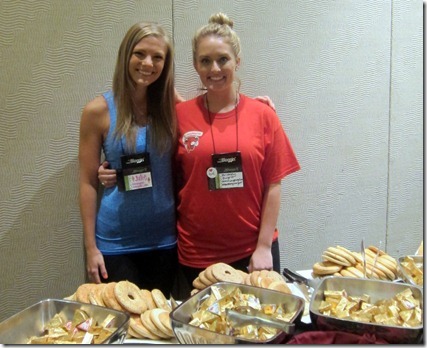 She is so much fun and we had a good time chatting during The Laughing Cow snack break. 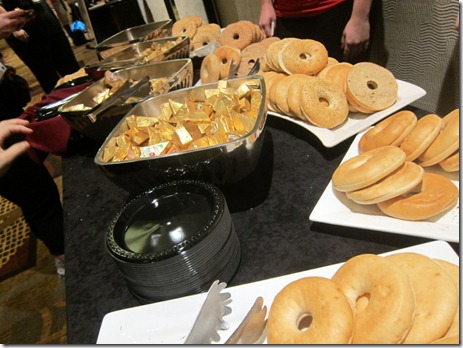 I made sure to dig into their cinnamon cream cheese since it’s one of my favorite flavors. I love it spread on a toasted English muffin or bagel, but it is fantastic in smoothies and gives them a cheesecake-like flavor. I need to make my banana cheesecake smoothie again!

I spent the rest of the second day of FitBloggin’ attending sessions and meeting new blogging buddies. 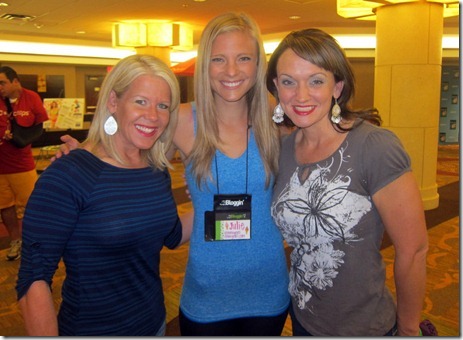 I had a great time talking with Lexy and Carman (pictured above) of Fire Lights Fire. Lexy and Carman are sisters-in-law and they, along with their other sister-in-law Cyndi, started their blog together to document their healthy living efforts. The three women have all lost weight and  share blogging responsibilities on their site which I thought was so neat! 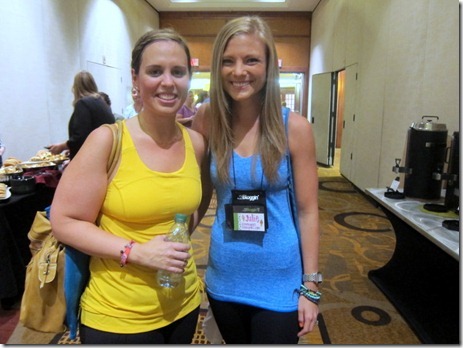 Kelly is a weight loss and healthy living blogger and apparently found my blog through an article in the Kappa Delta alumni magazine when they featured different bloggers in a past issue! She’s a fun one!

Emily is a mom who lives in Iowa and was so bubbly. Her energy was contagious and I had a great time talking to her! 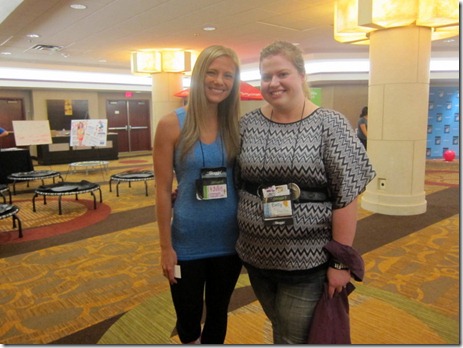 I also had fun talking about running with  Amanda! 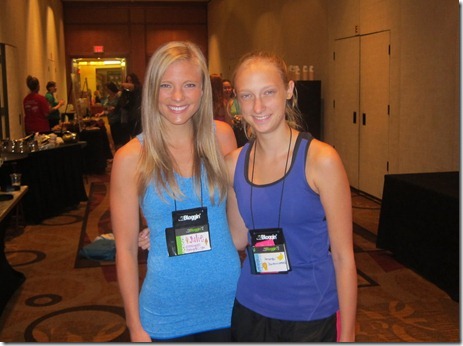 I know a few of you are interested in reading more about the sessions on FitBloggin’ I highly recommend you check out the FitBloggin’ website where you can find very detailed recaps of nearly every session that volunteer bloggers live blogged from the conference.

In between sessions, I took advantage of the popchips booth and grabbed a bag of their ranch tortilla chips. 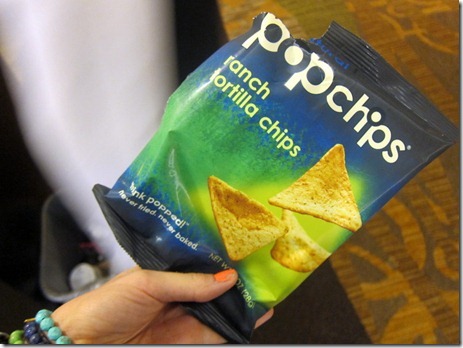 Lunch rolled around quickly and I fixed myself a plate of salad with fennel, radishes and salmon. 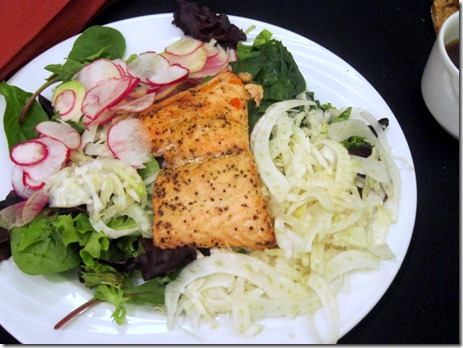 It was great and I went back for seconds. 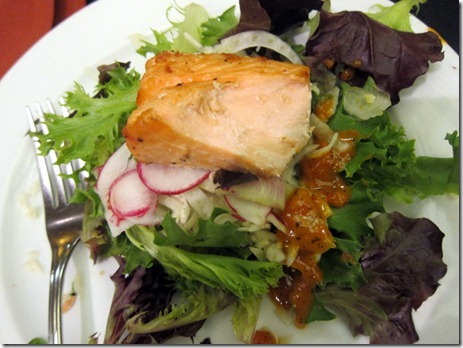 As I left the conference last night, I kept thinking about how the FitBloggin’ atmosphere was so friendly, laid back and fun. Everyone is so social and welcoming and I had the best time! After attending such an informational conference the previous weekend when I went to CFLBlogCon (awesome!), FitBloggin’ was a great contrast because it was so social and laidback.

It was a wonderful conference!