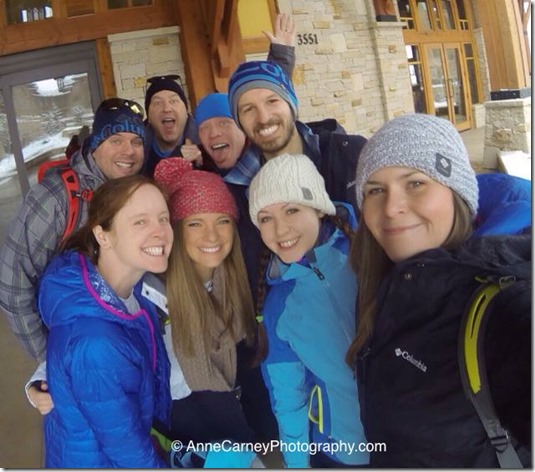 The second day of the #OmniGames began with breakfast at the #Omniten Hub, a large, yet cozy suite located within the Hyatt Escala Lodge. While we ate, scores from the previous day’s events were announced and Rebecca and I were pretty pumped to find out that we placed in the top 50 percent!

I was honestly shocked and we felt quite proud about our current place in the #OmniGames, but we knew it would be really hard to maintain our solid score since the second day’s activities played to the strengths of most of the other teams who had a winter #Omniten member on their team with ski or snowboarding experience. But Team Florifornia kept a positive outlook and knew that we’d have a fun day in Park City even if we finished dead last!

The second day of the #OmniGames initially called for four events, but due to intense winds, two of the four events had to be canceled. (Zip lining and a simulated free-fall jump were cut which was a bit of a bummer!)

The two events that remained for the day included:

For the first event of the day, Lookout Below, we drove to Utah Olympic Park, 2002 Olympic Winter Games venue for Nordic jumping and bobsledding, luge and skeleton. We arrived at the nearly 400-acre park ready to complete a super-high ropes course! 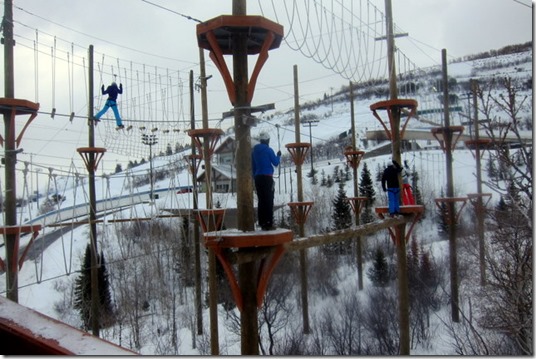 I’ve had the chance to participate in ropes courses a number of times in my life and think they’re a blast, so I was really excited about the challenge ahead! As we slipped into our harnesses and helmets, we listened to a run-down of the courses we were about to tackle. 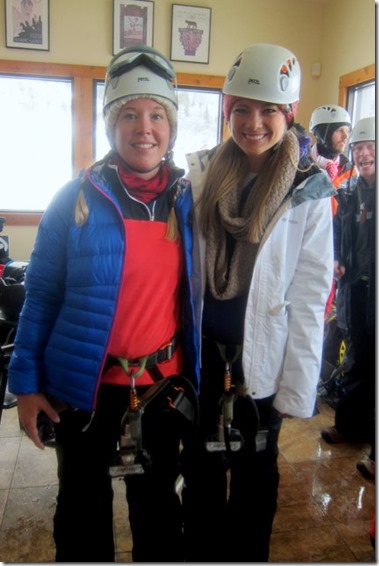 There were two ropes courses we could conquer: One high course and one lower course. The high course was the more difficult course and our guide warned us that it would be hard to get through and required a lot of upper body strength. If you completed the course successfully with no falls, you were awarded 100 points. A successful completion of the lower course earned you 50 points.

Rebecca and I wanted to accumulate as many points as possible, and we set out to complete the higher and more challenging course first. 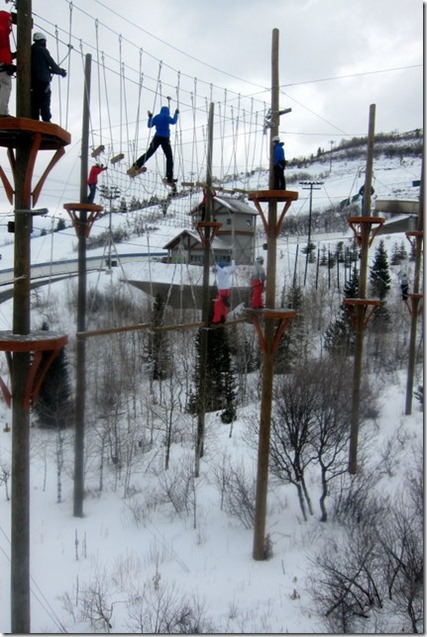 This course was no joke. It was hard, required a lot of strength and stabilization and caused many #Omniten members to fall at one point or another. One of the obstacles that proved difficult for many required you to basically hold up your body weight with your arms and move from swinging rope to swinging rope without falling. It was a challenge and my forearms and biceps were burning by the end, but I managed to stay up and didn’t have to fall into the safety of my harness. Woo! I was proud to have completed the course with no falls and earned our team 100 points toward our total #OmniGames score. 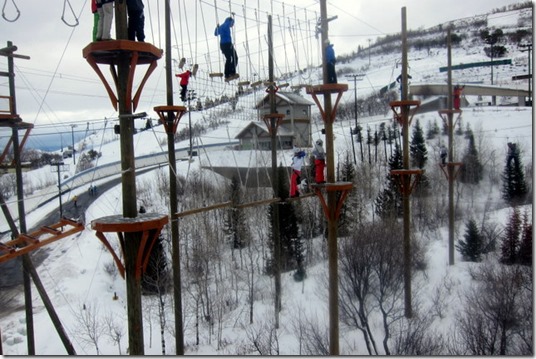 After the high ropes course, the lower course felt like a breeze and Rebecca and I flew through that one without any issues. Fifty points each! 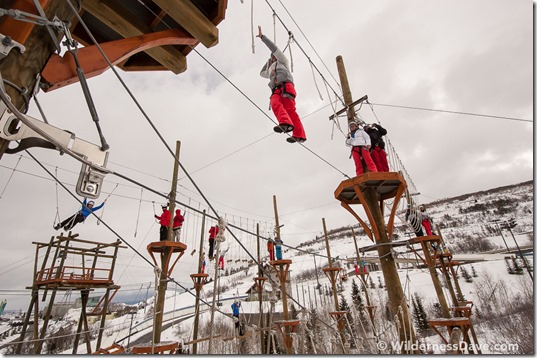 One of the best parts about the ropes course was finishing it and exchanging excited stories with my #Omniten friends. 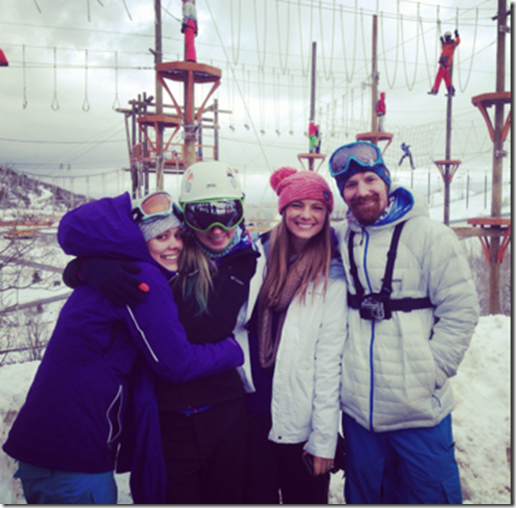 There’s something about attempting a challenge that takes you out of your comfort zone that makes everyone feel giddy and enthusiastic. As cheesy as it may sound, attempting and conquering new and challenging physical obstacles have often led to the moments in my life when I’ve felt most alive. This was one of those moments and I owe Columbia Sportswear a sincere thank you for allowing me the opportunity to experience something that got my heart racing in the best possible way.

With our first event of the day done, we drove back to the Hyatt Escala Lodge to rent our ski gear for an afternoon on the slopes. 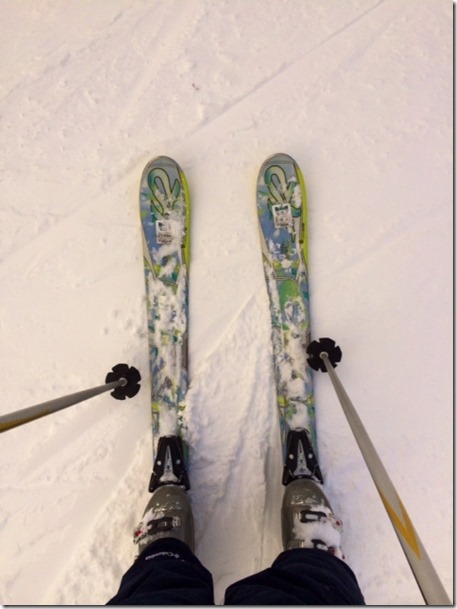 The Downhill Derby event was the final event of the day and every team was given 90 minutes to try to accumulate as much vertical feet as possible on the slopes. Since I haven’t skied in well over a decade and my teammate isn’t a skier, we tried to think of a strategy. We reviewed a map and made a game plan, but also told each other to go with the flow and stay safe.

I barely had time to clip into my skis before it was go time! With the clock ticking, I took off toward the ski lift. The group of new skiers that I initially planned to ski with seemed a little more apprehensive than I anticipated and I was anxious to get moving. I 100 percent understand their trepidation since skiing can be very intimidating, but once I realized they were planning to ride the gondola up and down to accumulate their vertical feet, I knew I needed to change my plan since I really, really wanted to ski!

I feel so fortunate that I almost immediately met up with Aleya who was also a very new skier, but quite adventurous. 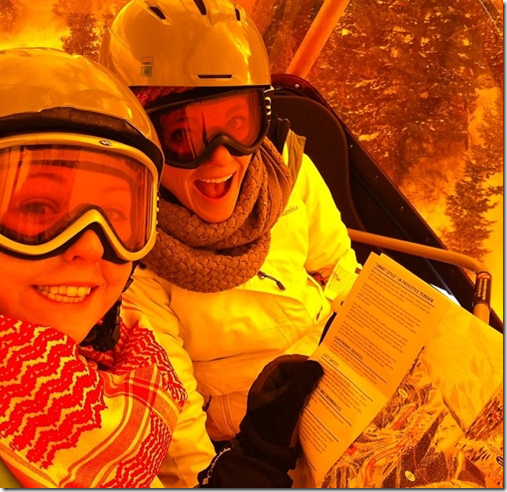 The two of us hopped on the ski lift (with a yellow cover – hence the above picture) and looked at a map together, formulating a new plan. We decided to do a green trail together to increase our confidence and after two times on the green, we were ready to move up and try our best on a blue. It went really well and though we did a serious “power plow” (pizza!) stance down the mountain for most of the run, we finished feeling exhilarated and ready to try it all again! We ended up going down the blue trails three times and had a blast!!! 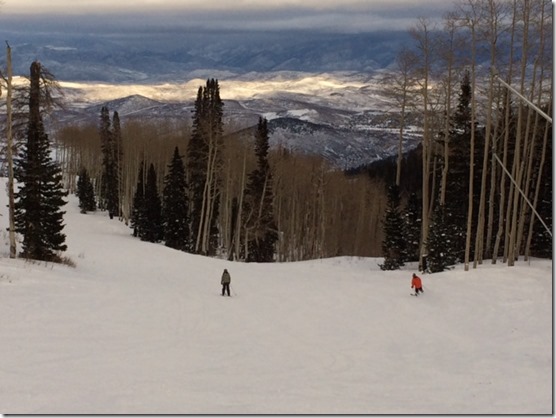 On our last run, we stopped to soak in the scenery a  few times and snap some pictures. The views were unbelievable and as I inhaled the crisp mountain air, I was honestly blow away by my surroundings. Park City is beyond gorgeous. 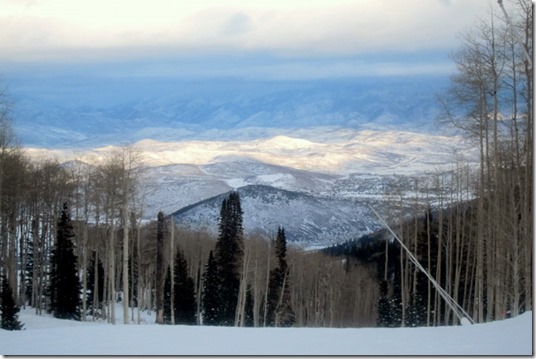