Navigation
This weekend was an absolute whirlwind in the best kind of way. It was jam packed with fitness, food, wine and quality time with some wonderful women that I’ve connected with through blogging.

I arrived in Boston on Thursday night and had quite the adventure checking into my hotel room. After getting my room key from the front desk, I headed up to my room and unlocked the door only to find a strange man in the room! Thankfully he was just hanging out talking on his cell phone, so our awkward encounter wasn’t as horrifically awkward as it could have been, but it was awfully amusing.

We got everything worked out and I was assigned a different room without too much trouble.

I quickly unpacked in my man-free room before joining a group of FitFluential ambassadors who were also in town for Friday’s event at the Reebok headquarters for dinner at The Stadium. 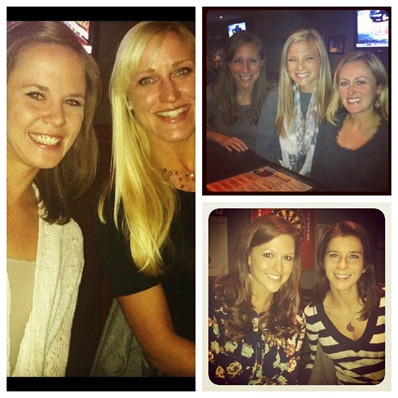 (Clockwise from left to right: Heather, Jess, Ericka, me, Anne, Tina and Courtney. Big thanks to Kelly for the pics!)

It was so, so great to reconnect with some of my favorite bloggers and meet a bunch of new blogging friends, too!

Things got started nice and early on Friday when our group of bloggers met at the Reebok headquarters at around 8:30 a.m. in our Reebok gear. 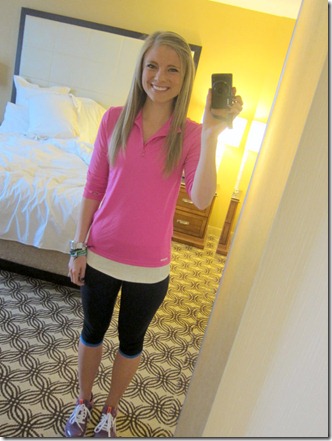 I felt very lucky to be invited back to Reebok after such a memorable visit back in May. (While I was not paid to come on this trip, my travel was covered.) This time around, the workouts were more intense, conversations were more intimate and forthcoming and employees were just as enthusiastic. It was awesome!

When we arrived, we were greeted with a light breakfast before we settled into our seats and learned more about Reebok, new products and the company’s overall brand strategy. 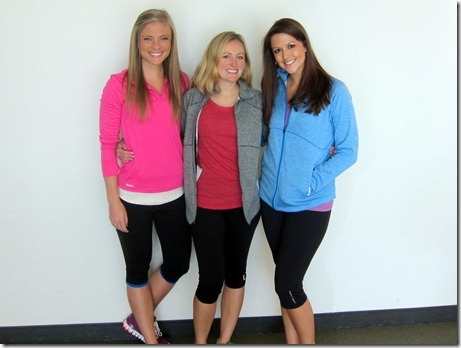 Reebok wants to be viewed as the leading fitness brand, offering apparel and shoes for athletic activities ranging from dance and Zumba to yoga, CrossFit and running. We got a sneak peek at the company’s product line for next year and I think that those of you who love Zumba, bright prints and comfy yoga apparel will be pleased with the company’s direction.

The culture at Reebok absolutely exudes fitness. Employees have access to a gym on site and of the approximately 1,000 employees who work at the headquarters,  600 are members of Reebok CrossFit ONE, the CrossFit gym (or “box” in CrossFit lingo) located on Reebok’s property.

To say the company is enthusiastic about their relationship with CrossFit would be an understatement. They’ve worked closely with CrossFit athletes to design a CrossFit line of Reebok gear that is both functional and fun. (Anne and I are sporting the CrossFit jackets below.) They also had a huge presence at the CrossFit Games as the leading sponsor. 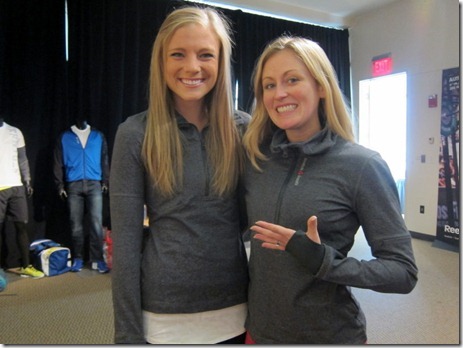 Since I had such a blast completing the CrossFit workout the last time I visited, I was really looking forward to completing another WOD (workout of the day) at CrossFit ONE with my fellow blogger buddies. 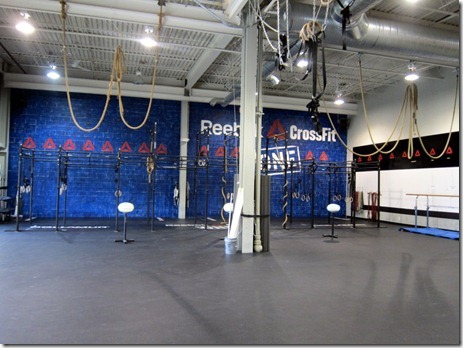 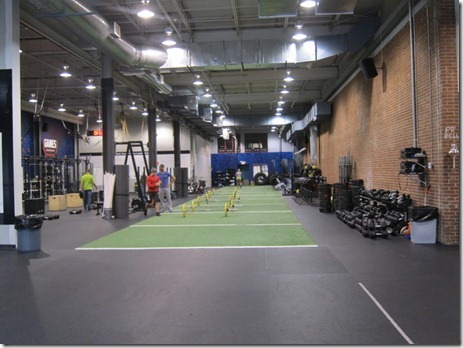 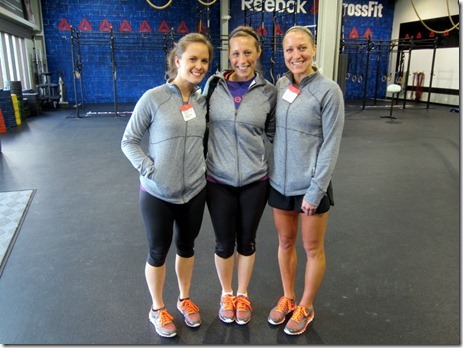 Workout at Reebok CrossFit ONE

When we arrived for our workout, we were greeted by some of the top CrossFit athletes in the world. 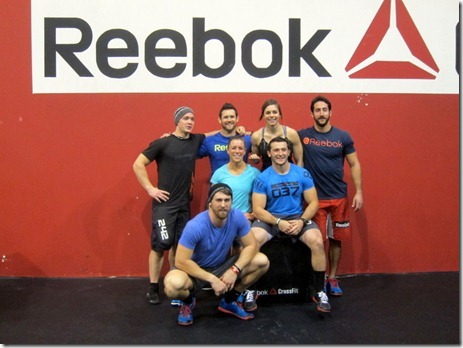 These men and women are athletic, strong and inspiring! Ryan does a lot of CrossFit workouts at our gym that he gets from the CrossFit website and was really into the CrossFit Games, so the two of us watched these athletes compete on television a few months ago.

It was pretty crazy to see them in person… and work out with them. When I found out that each CrossFit athlete was going to be paired with two bloggers to complete a team workout, butterflies started building in my stomach.

I am not a competitive person by nature but know that to be an elite CrossFit athlete you likely have to have a serious competitive edge, so I immediately started worrying about letting my team down.

Well, I survived the workout, had a blast and absolutely loved my team. We were all a sweaty mess by the end of the workout! 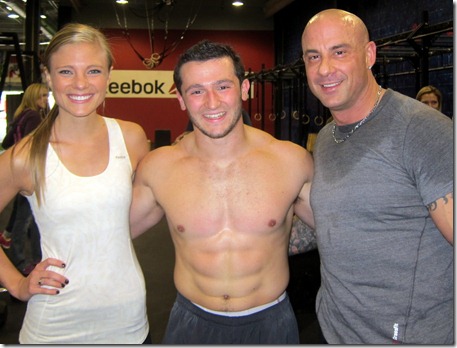 My CrossFit friends out there might recognize Austin Malleolo, pictured in the middle above. He finished in eighth place at the 2012 CrossFit Games and is the head coach at Reebok CrossFit ONE. He’s a fabulous athlete and one heck of an encouraging teammate. He and my fellow blogger teammate Alfonso made the workout so much fun, even though it kicked my butt! 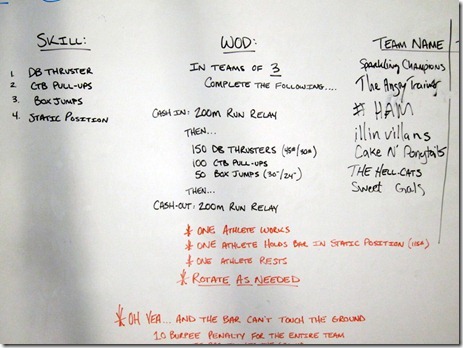 In teams of three, we were told to complete the following workout:

Each member of our team began the workout by running 200 meters.

Then, as a team we had to complete 150 dumbbell thrusters, only while one person completed the thrusters, another teammate had to hold a heavy bar in a static position (overhead or in front of the body) while the third teammate rested. 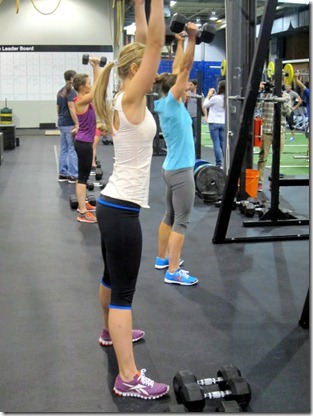 While I did thrusters, Austin held the bar over his head as Alfonso rested. We switched off whenever one of us hit our limit and after completing 150 thrusters between the three of us, we moved onto pull ups (for the guys) and ring rows (for me). 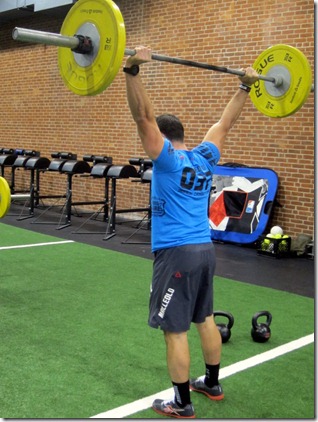 It was the same deal for the pull ups/ring rows and the box jumps that followed. While one person completed the exercise at hand, another held the heavy bar in a static position while the final teammate rested. It was TOUGH! 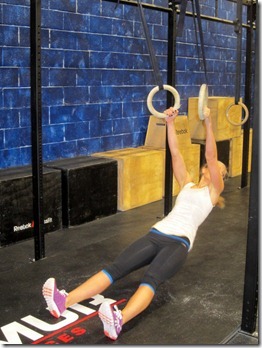 The biggest challenge for me was holding the 115-pound bar in a static position, as seen below. 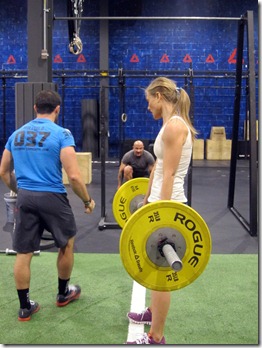 Before starting the workout, I practiced a few 115-pound deadlifts and holds and knew holding the heavy bar was going to be the biggest obstacle for me in the workout. l didn’t want to scale the workout back and felt like I could do it, so I breathed my way through and held on. It was intense but I loved it!

Guess who else completed the workout? Annemarie McKay, a 74-year-old Reebok employee who regularly does CrossFit at CrossFit ONE. She does the WODs at her own level and is incredible! 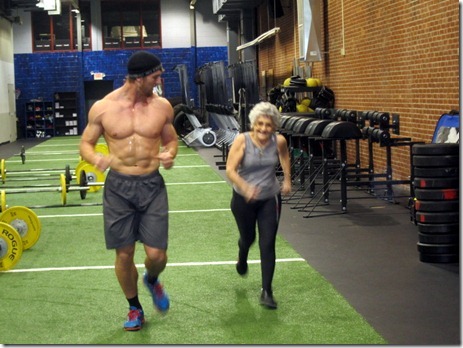 I want to be like her one day! (And yes, those are some ridiculous abs.)

Lunch and a Reebok Run

After our workout, we headed upstairs to learn more about Reebok products, give feedback to the employees and preview apparel and shoes that will be hitting the market next year.

Of the Reebok shoes I’ve had the opportunity to try, my favorites are the RealFlex transitions. (I’m wearing them in all of the above photos.) Apparently they are great for hybrid workouts, including circuit training. They’re also Reebok’s most popular shoe for women. The carbon rubber on the soles of the sneakers is great for traction and durability and I really appreciate this feature when I’m doing mountain climbers and burpees. No slipping!

By the time lunch rolled around, I was ready for food!

Our group filled our plated with greens, veggies and protein from a salad bar that was set up outside one of the meeting rooms. 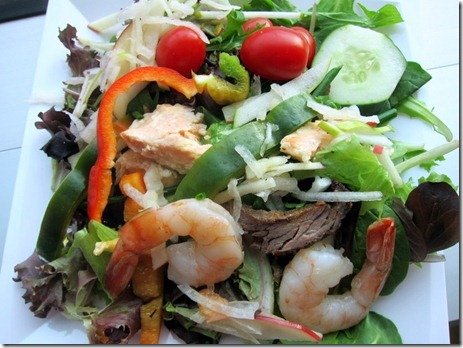 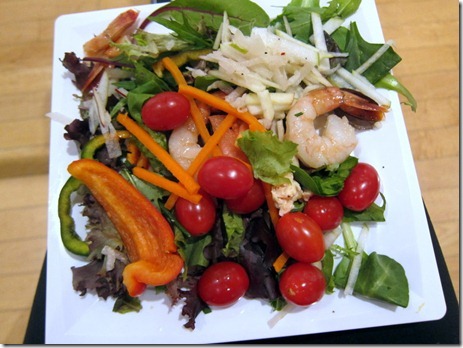 I felt awkward giving my opinion about features I didn’t like in the open forum last time and ended up going back into one of the meeting rooms when everyone left to privately share some of my less-than-glowing reviews with them about the appearance of certain shoes and the fit of some of their apparel. The two women I talked to seemed to really want to hear my thoughts (and agreed with many!), so this time I shared my feelings much more openly and everyone else seemed to do the same. It seemed much more productive and beneficial.

For example, some of my fellow smaller-chested friends and I said we hate it when the light padding cups that line certain sports bras are removable. The pads always fall out in the washing machine. All too often they become creased and are simply a pain in the butt to stick back into the bra after they’re washed. We suggested making the cups permanent in some bras to avoid this annoyance. I also said I would love to see more capris and spandex pants with a thicker material that is more figure-flattering. The Reebok employees seemed incredibly receptive to these suggestions and said a lot of the gear on their CrossFit line is already implementing some of these ideas.

A few hours after lunch, it was time to shake out our legs outside on a run around the Reebok campus. 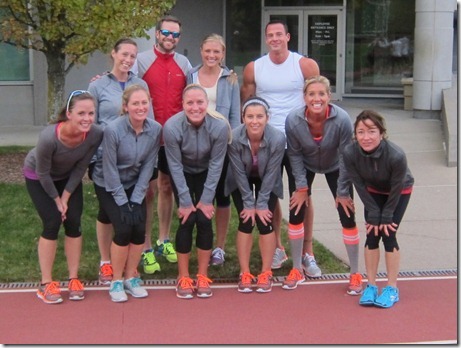 Our run was led by Patrick Joyce, the senior manager of Reebok running sports marketing who is also one heck of a talented runner. He heads up Reebok’s running club and ran professionally for many years. The first thing I noticed about Patrick? He looks like Bob Harper from The Biggest Loser. He’s just as positive and encouraging as Bob is, too! (How random is it that I’ve met two men who resemble Bob in less than a month!?)

Our run wasn’t a long one, but it felt good to get out and sweat a bit. Exercise is energizing and it was a great way to conclude the day!

I cannot say thank you enough to Reebok for such an awesome day. From the behind-the-scenes look at upcoming merchandise to working out with CrossFit athletes and engaging with Reebok employees, the experience at Reebok headquarters was  something I felt honored to be a part of from start to finish.

For the longest time, I wondered why no one made lined sports bras that gave smaller-chested women more shape while also providing support. Thank goodness many brands have hopped on that train!