Navigation
Anyone else immediately think of the Counting Crows song when you read my blog post title? I figured it worked because today’s post is a little peek at what’s been going on around here over the course of the past few days!

I didn’t have the chance to share my usual weekend recap but still wanted to highlight some weekend fun in this space as well as play a little catch up. Sooo here’s what’s been happening ’round here: 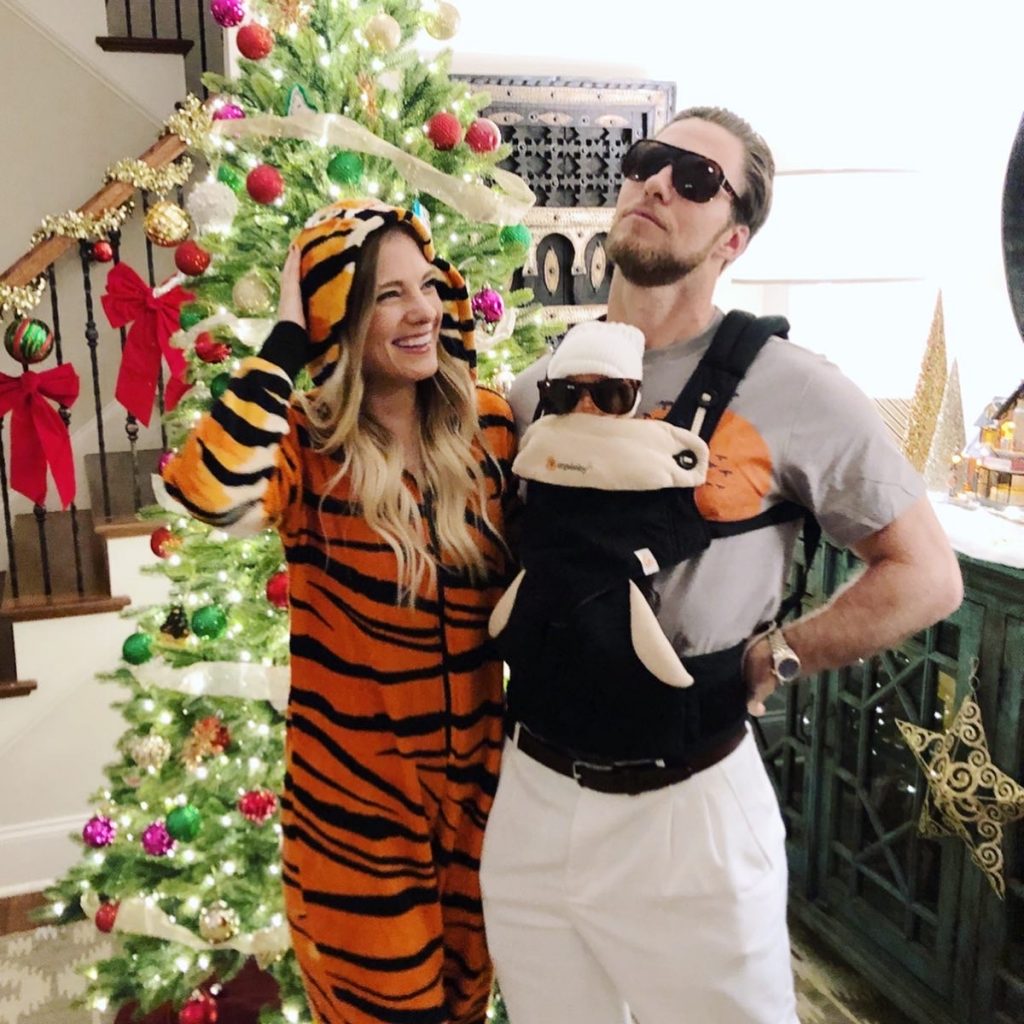 On Friday night Ryan and I got a babysitter and headed out to a Las Vegas-themed holiday party! I don’t think I’ve ever been to a holiday party with a theme that centers around anything other than the holidays or ugly sweaters so this was a fun out-of-the-box way to celebrate and everyone got really into it! We tossed around a ton of different Vegas-related costume ideas but in the end we kept coming back to our idea to dress up as Alan and the tiger from The Hangover. 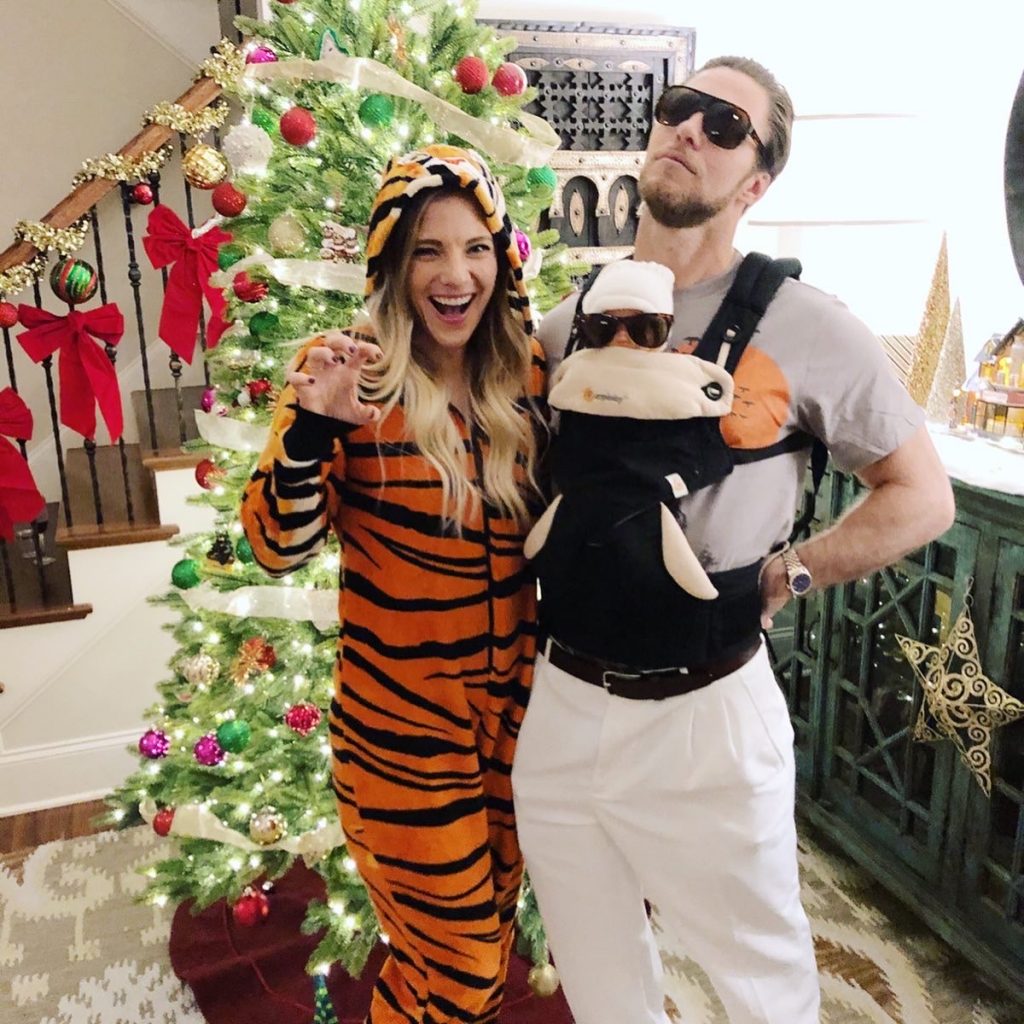 The movie cracked us both up when we first saw it years ago and we figured the pairing might be a little unexpected. Plus, the costumes were really easy to assemble since we had most of the stuff needed to re-create Alan and Amazon came in clutch with a tiger onesie. (Gotta love Chase who was quick to point out that tiger costume didn’t have a tail. I guess that’s what $29 on Amazon gets ya!) 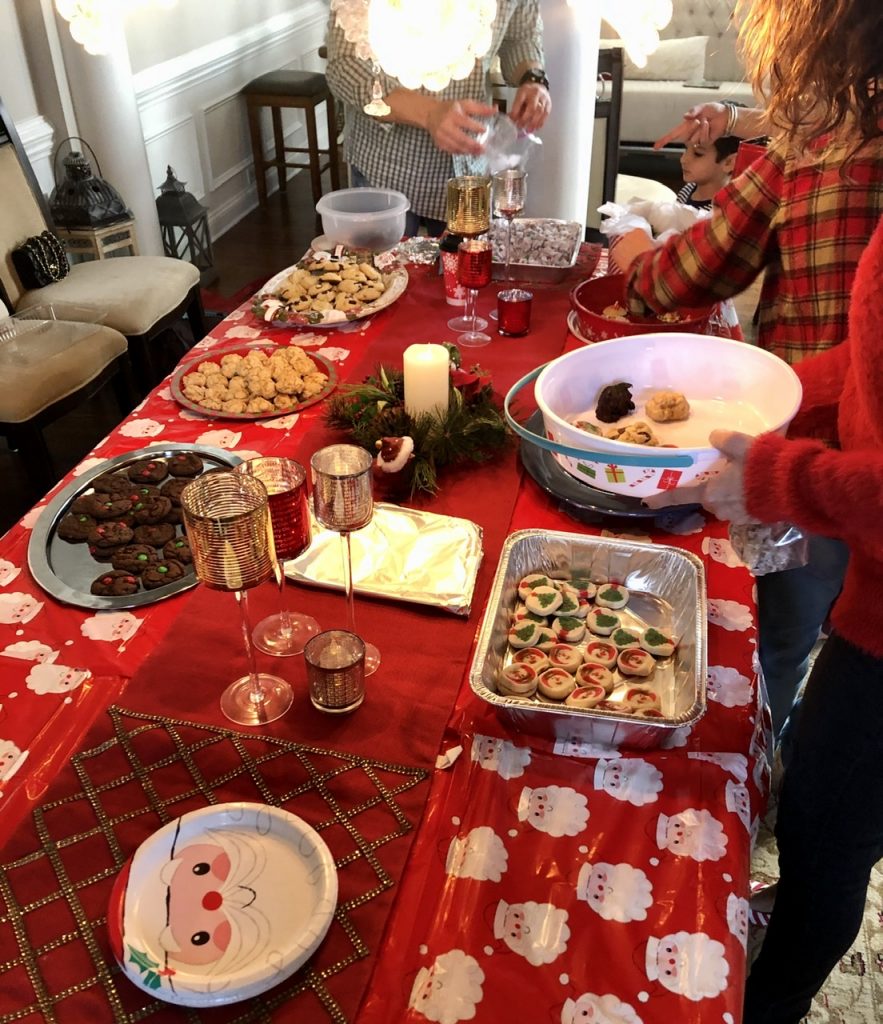 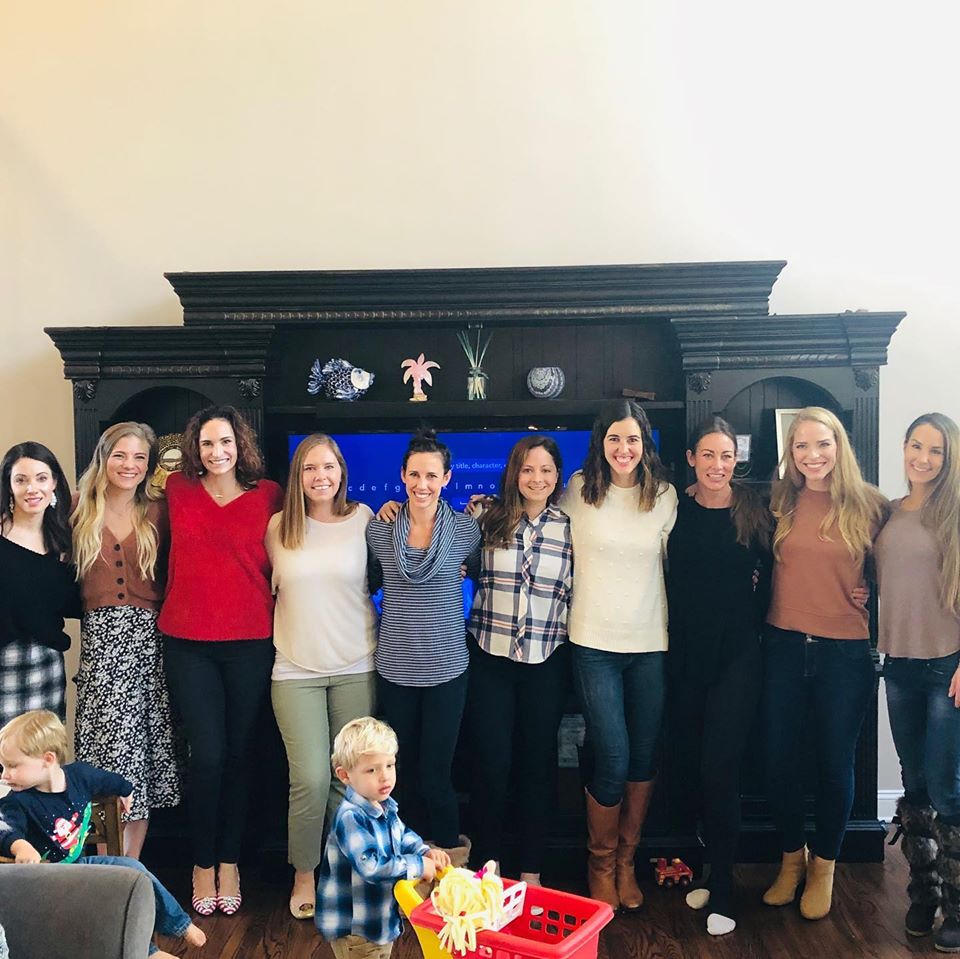 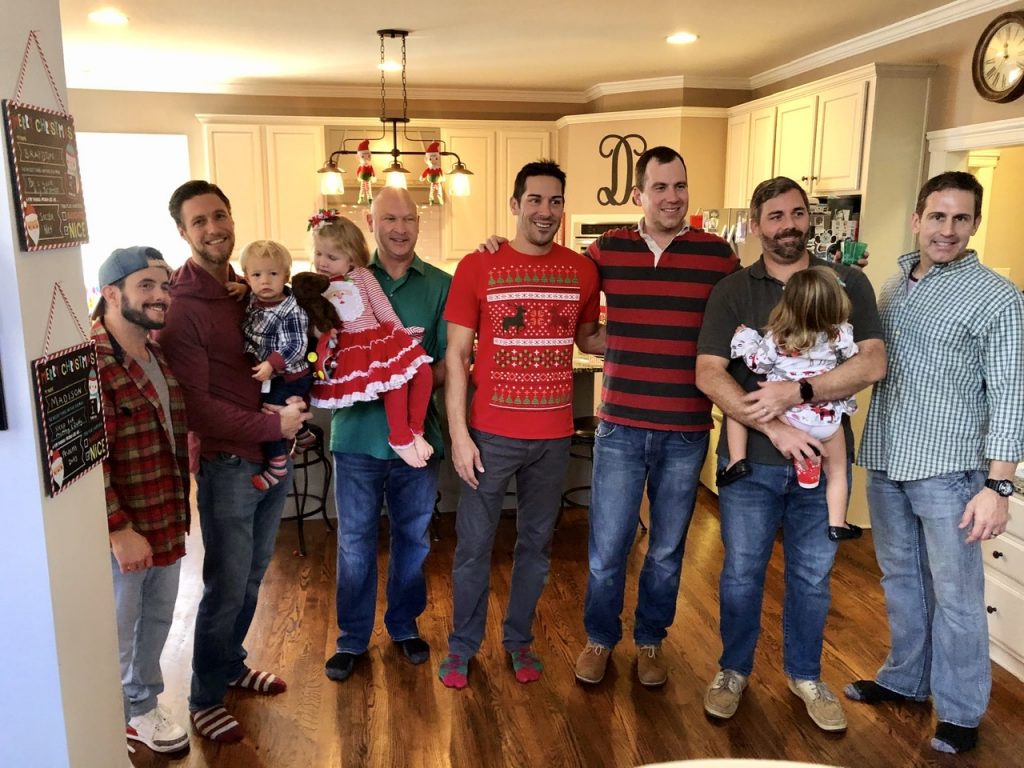 Our Saturday morning plans took us to our friends Alexis and Dan’s house for their annual cookie exchange party and Santa soiree. Every year Dan dresses up like Santa — aka “Dan-ta” — and it’s so fun to see how the kids react to him when he “ho, ho, hos” his way into the party. The big kids were all about it this year and we all loved listening to their answers when he asked them what they wanted for Christmas. (Chase’s reply was a guitar which was a welcomed answer since he hasn’t given us much when we’ve asked him for ideas this year. Apparently his beloved music instrument collection needs a little expanding!)

Pretty much every little one under two had a meltdown in Santa’s lap which was to be expected. There’s something about that age, I’m telling ya! Ryder was instantly curious about Santa but very apprehensive when he sat on his lap with Chase.

(Gotta love Chase’s half disinterested, half “get it together, little brother” look in the above pic.)

As time went on, Ryder kept his eye on Santa and got a little braver when he saw all the big kids having fun talking to Santa. He end ended up walking over to Santa all by himself for a high-five which I took as a sign he might do okay with “round two” with Santa. 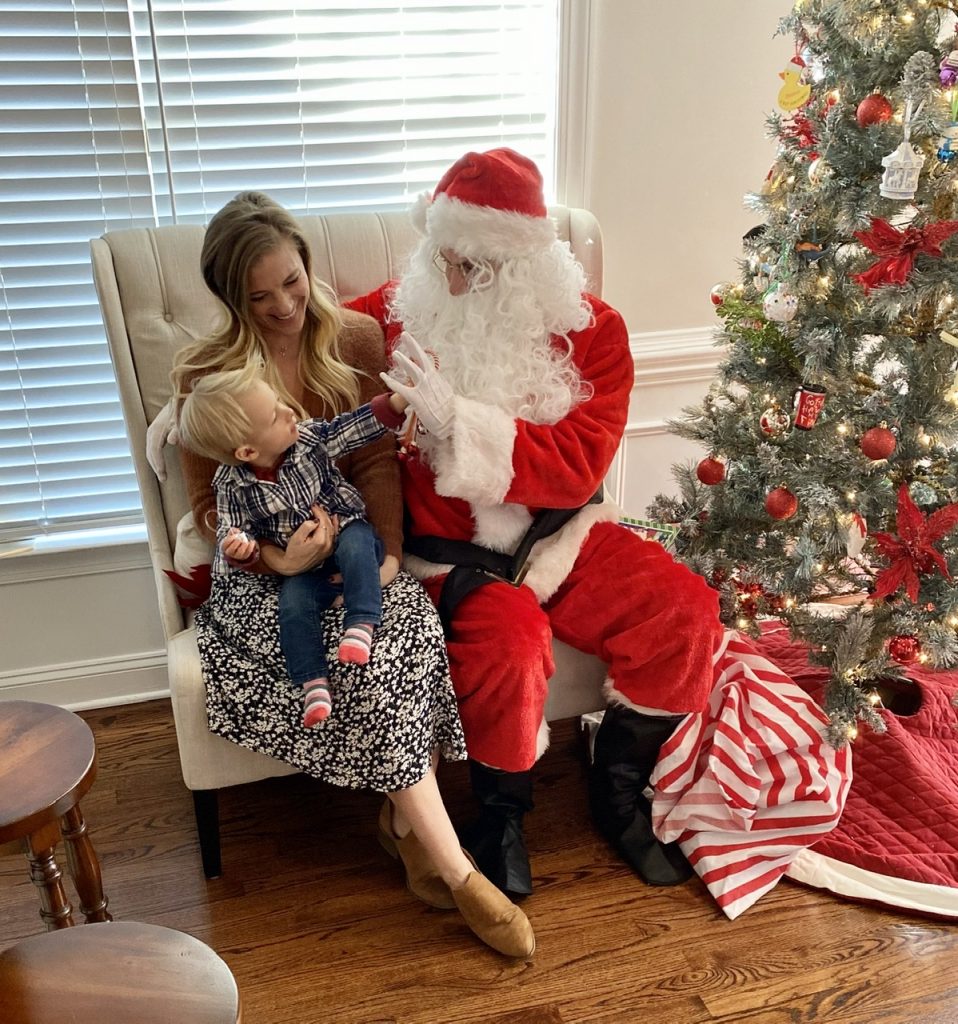 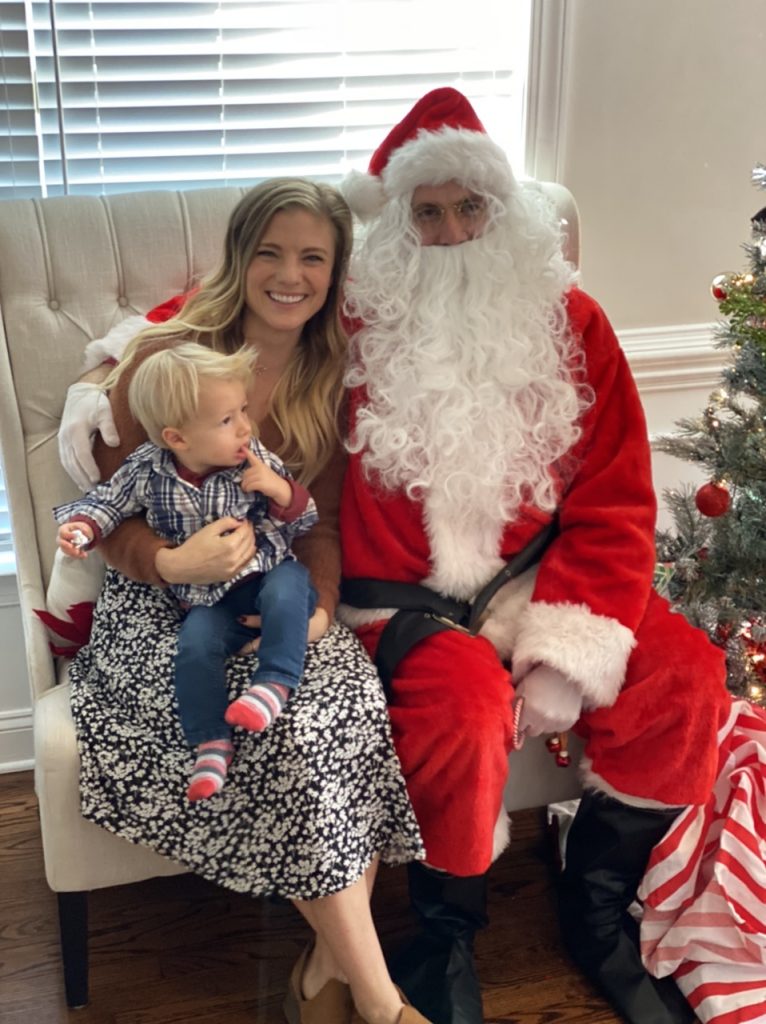 Outfit details: Cropped sweater: AE Studio / Skirt: GAP (sold out but this one from ASOS is similar and only $25)/ Booties: Fergalicious

We have plans to visit Santa again this coming Saturday so hopefully the positive memories from this past weekend will stick with our little dude. 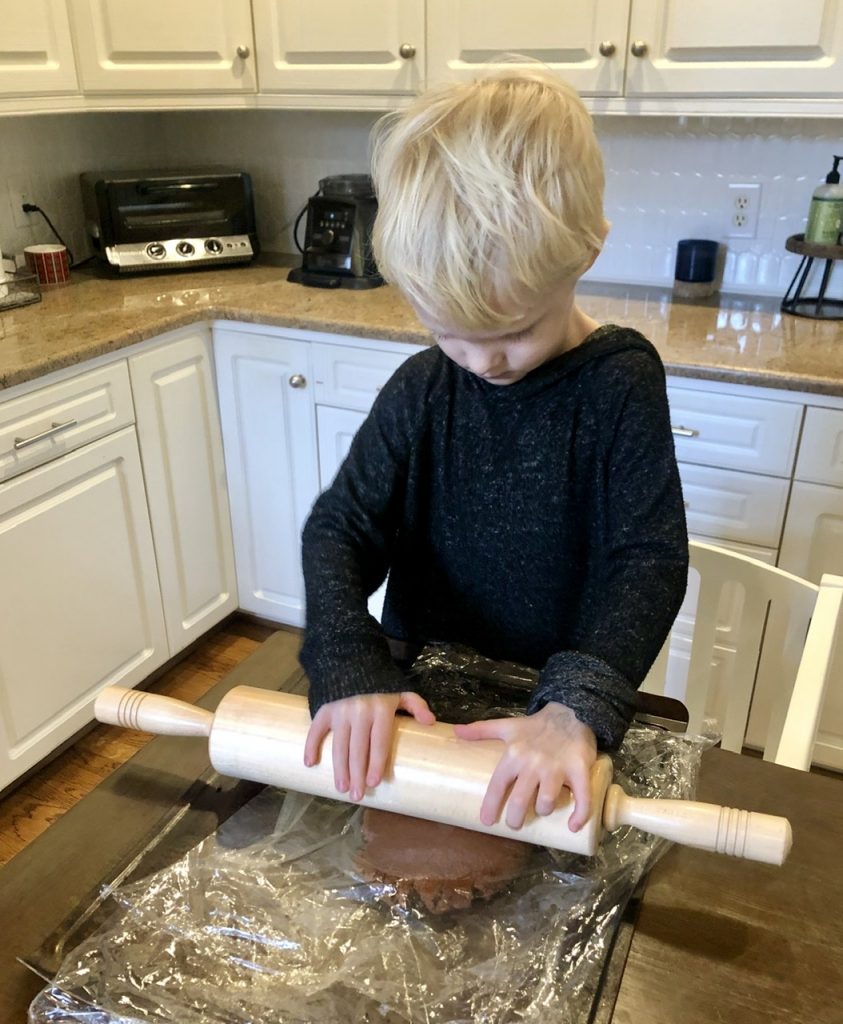 Sunday ended up being a really low-key day. Our initial plans to head off to a friend’s house for a family holiday brunch were rescheduled at the last minute so we took that as a sign to change into our pajamas once we arrived home from a morning MyGym class with the boys and get a little crafty! We picked up everything we needed to make cinnamon ornaments on our way home and got to work in the kitchen! We followed Kristin’s recipe for the ornaments (quick tip: don’t roll the dough too thin!) and they turned out great. Did you guy make cinnamon ornaments as a kid? I can still remember the look and smell of a cinnamon gingerbread man ornament I made when I was younger that hung on our tree every year! 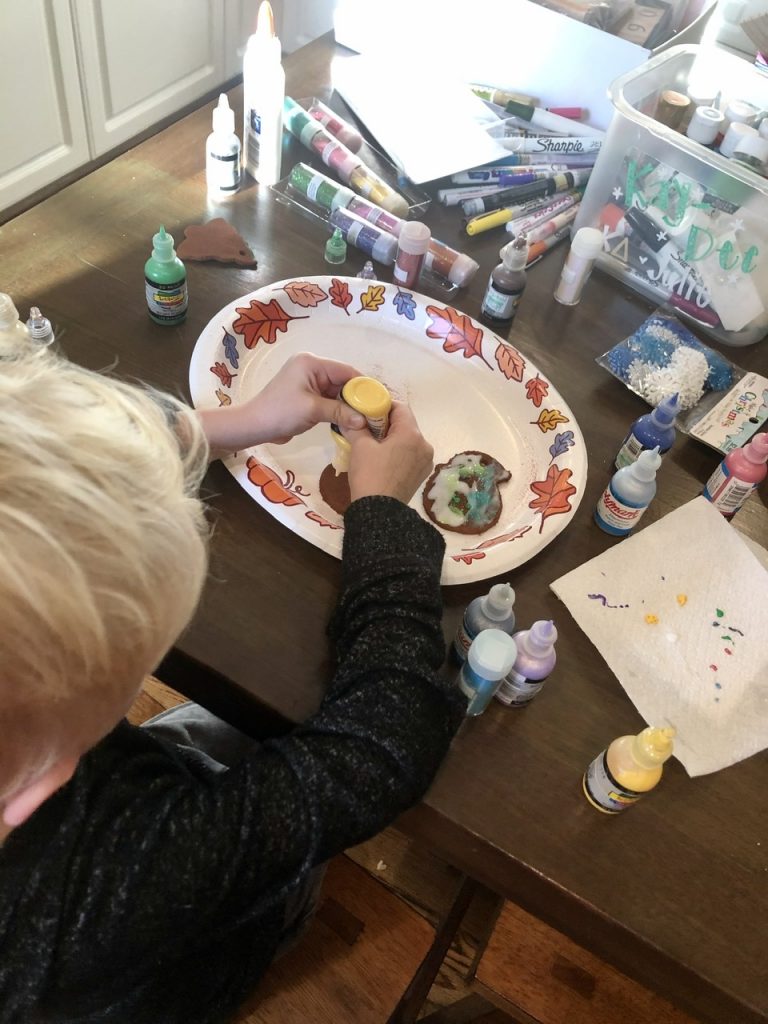 One big fail occurred when we went to decorate our ornaments because I hadn’t used my puffy paints since college and most of them were really hard and dried out. We managed to decorate a few of the ornaments with glue, glitter and a couple of puffy paints we brought back to life but we’ll decorate the rest later this week once my Amazon order for glitter puffy paints arrives. Whoops! 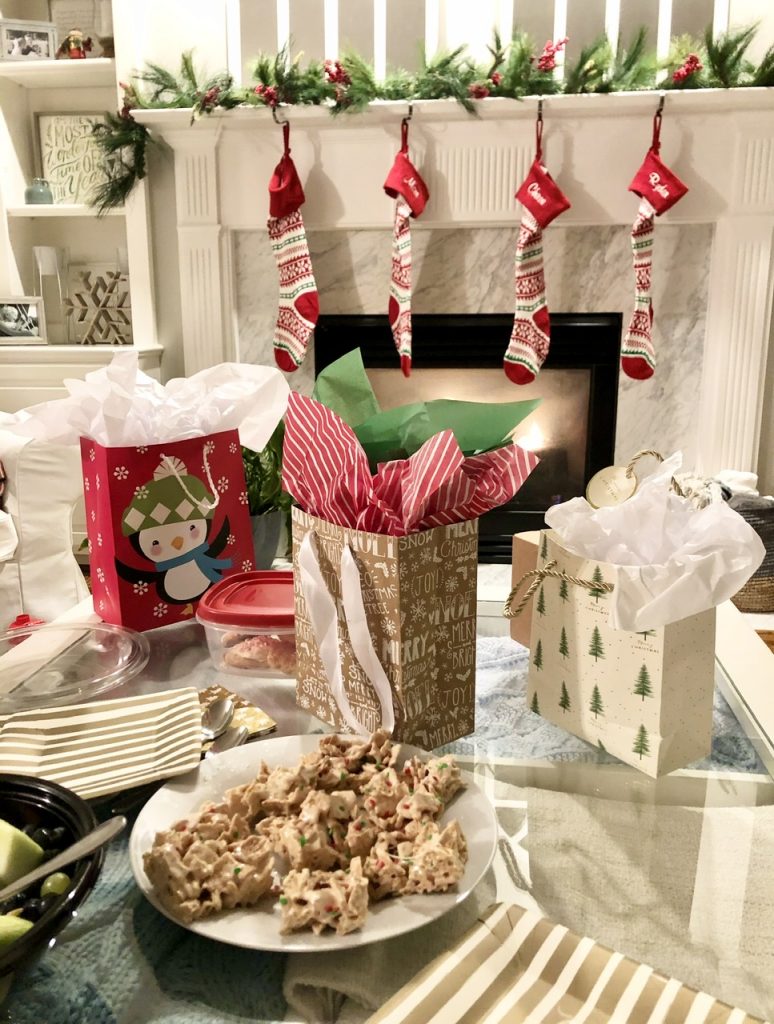 Last night I had a few of my friends from my small group over for a holiday mug exchange! We are all reading the same advent devotional and got together to chat about it and catch up with each other during such a busy season. It was so nice to have some uninterrupted time together while we ate lots of holiday sweet treats. 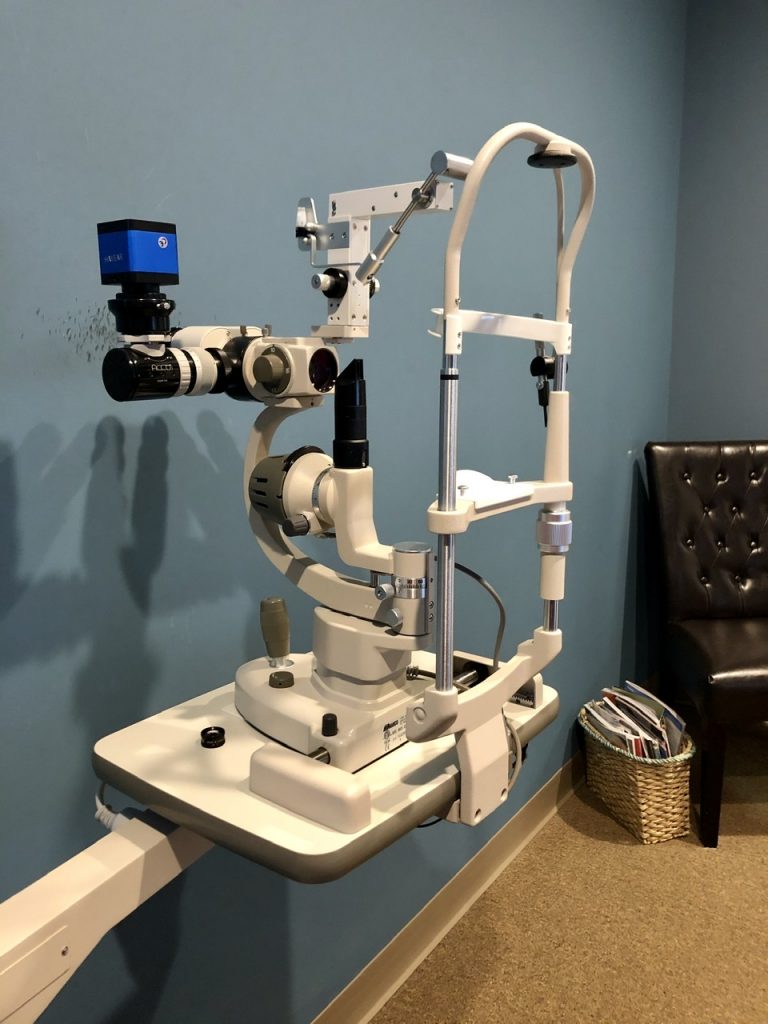 On Sunday, as I was popping open a large plastic food container, a piece of the plastic container flew up into my eye. It was incredibly painful and my eye would not stop tearing. It eventually settled a bit but was really uncomfortable. I ended up unable to sleep around 3:30 a.m. on Monday morning and just got up to work because I couldn’t stop tossing and turning and my eye was still really bothering me and wouldn’t stop tearing. I figured I should err on the side of caution and made myself an appointment at the eye doctor for later that day. It didn’t take the optometrist long to tell me I scratched my cornea which explained the pain, the excessive tearing, the sensitivity to light and all the other fun stuff I was experiencing.

I had a bit of a Rachel Green moment during my appointment because I could not get it together enough to stay still for the doctor to put a contact bandage in my eye. I flinched over and over again and it was borderline comical. I felt so bad but I couldn’t control my reflexes and laughed because I kept thinking of Rachel’s freak-out moment with the eye drops on Friends. We eventually got it in there (clearly I am not well-versed in the world of contact lenses) and after a visit back to the doctor this morning, my eye is looking and feeling a million times better. Phew! 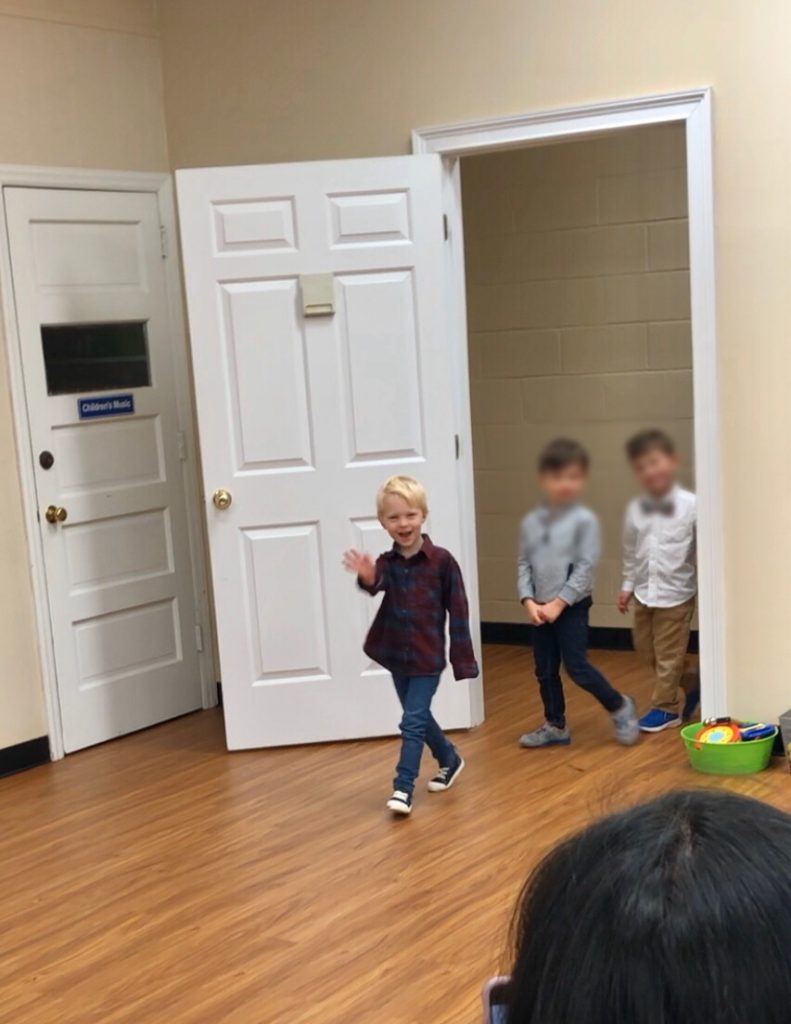 Chase’s preschool class had their holiday party today and he lit up the moment he saw Ryder in my arms! His first question to me when I told him he had his holiday party today was whether or not Ryder was going to come and he did all the silly faces he knows make his little brother laugh before the show started. I loved watching him sing and dance with his friends (he and Claire were quite the duo!) and even though he turned down a picture with Mom after the show, we still had a fun time digging into the lunchtime feast and chatting with the other kids and parents. 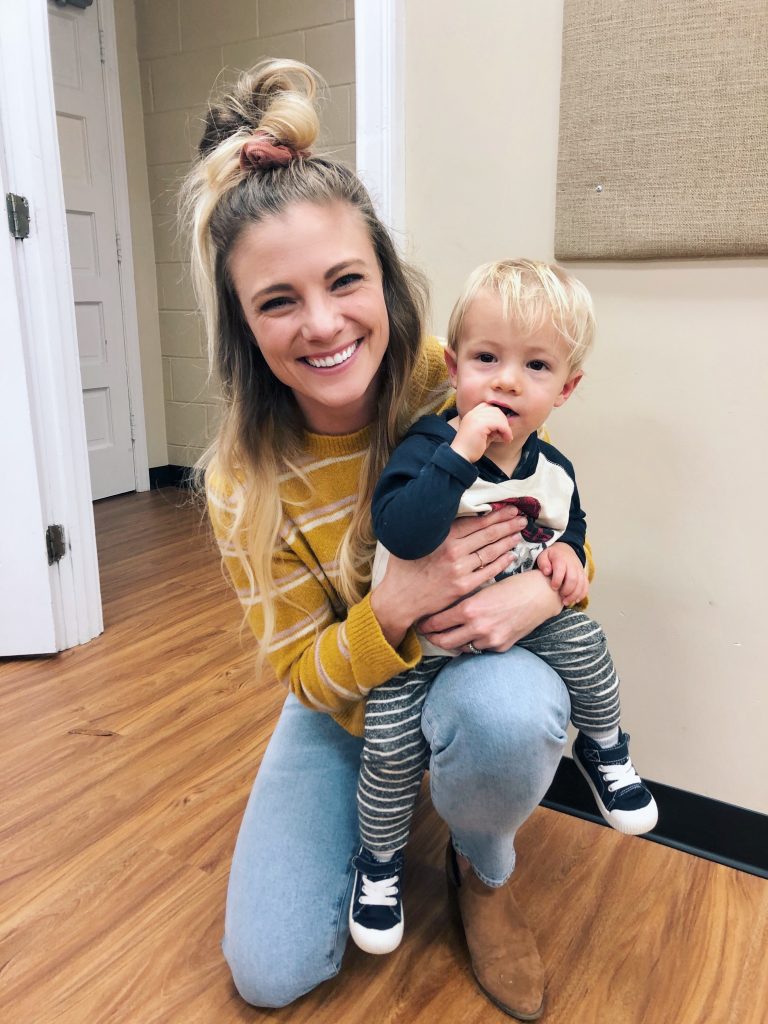 One thing I’m certain about after attending a few preschool events with Ryder in tow: He is VERY ready for preschool next fall!

Tell me about something happening with YOU lately!