Navigation
Hello hello! How are you guys doing? I hope the week is treating you well so far. It’s been a hot one in the Charlotte area! It feels like we sped through spring and summer smacked us right in the face with heat, humidity and sunshine. I’m not complaining though because something about summertime makes me feel all giddy inside. Pool time, boating on the lake, longer days with more sun… Bring it on!

Despite the weather, this feels like the final “normal” week we’ll have around here before summer break officially begins because tomorrow is Chase’s last day of preschool. I wanted to capture one last day-in-the-life post before Chase is officially done with three-year-old preschool and made sure to snap lots of pics of our day yesterday. I figured I’d share them here both for nostalgia’s sake and for those of you who said you prefer blog day-in-the-life posts versus IG Stories which not-so-secretly made my heart soar because the blog will always have my heart.

Tuesday morning began as most mornings do around here! I said goodbye to Ryan as he left to work out, made myself a hot cup of coffee, grabbed two no-bake protein balls and dove into my latest small group study. Then it was work time!

I managed to get through nearly 90 minutes of work as I dug into an oatmeal bake I crumbled up and topped with almond milk before Chase was up for the day and ready to read stories. 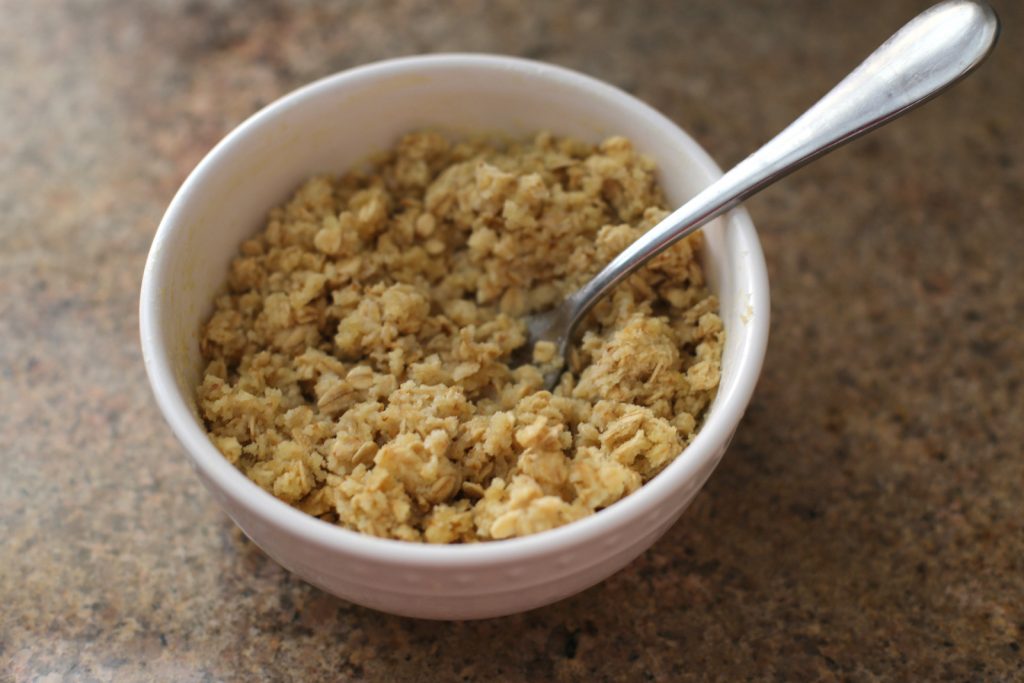 Chase cracks me up nearly every morning because I’ll hear absolutely nothing on the monitor and then, seemingly out of nowhere, he’ll scream, “MOM! It’s morning time!!! I’m ready to read my stories and eat my breakfast and get dressed and go potty!” That kid goes from 0-60 in 0.5 seconds, I’m tellin’ ya. Chase and I read some stories together until Ryder started making noise and Chase wanted to greet his big brother. I kept the monitor on the two of them as I got dressed (Ryder gets SO excited when he sees his big brother) and then I headed into Ryder’s nursery to nurse him while Chase played with some toys.

We eventually made our way downstairs for breakfast and some train table playtime before we had to leave for preschool drop off. 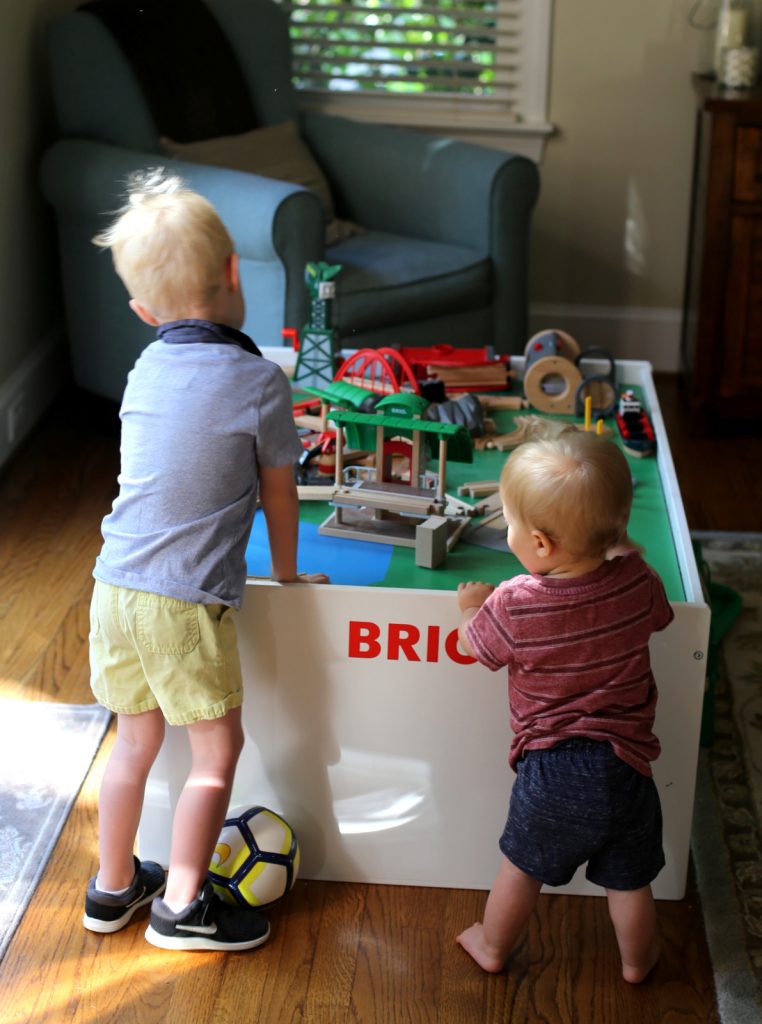 (As you can see from the crazy train tracks, the boys’ train table gets hit by Hurricane Ryder just about every day around here.)

After Chase practically sprinted into his classroom (it was his day for Show and Share which is a BIG deal), Ryder and I made our way to boot camp. Ryder had fun playing with toys and baby friends while I went through the following leg workout: 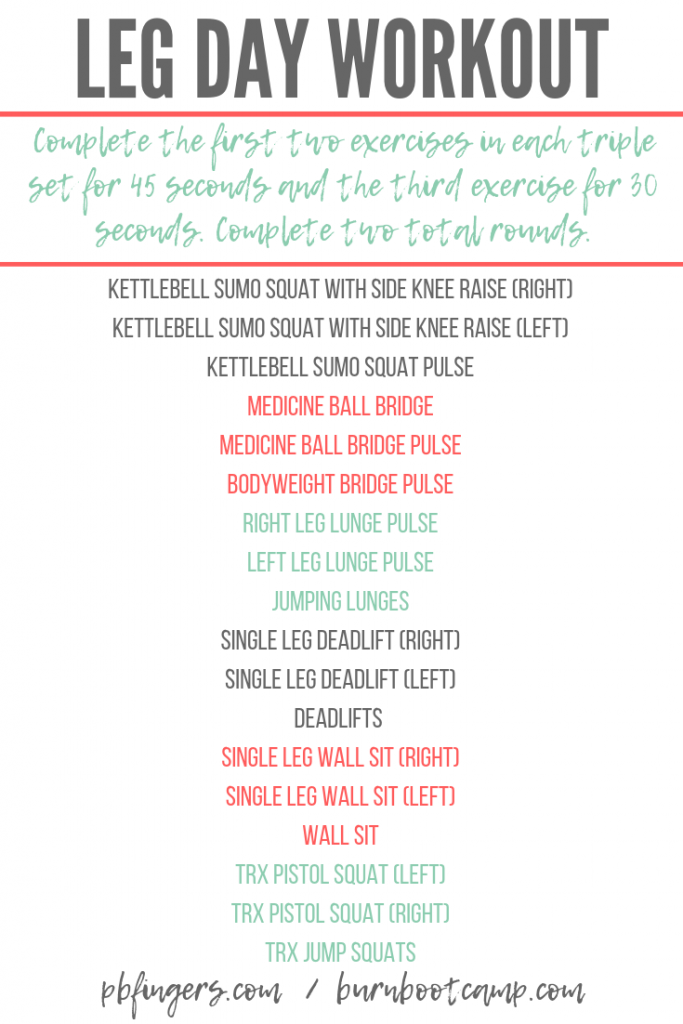 You’ll never hear me say I love leg day, but this workout wasn’t too terrible since it kept things moving at a fast pace!

By the time we made it back home, Ryder was ready for his morning nap so I settled him in his crib before I grabbed a quick shower and made myself a post-workout green smoothie. 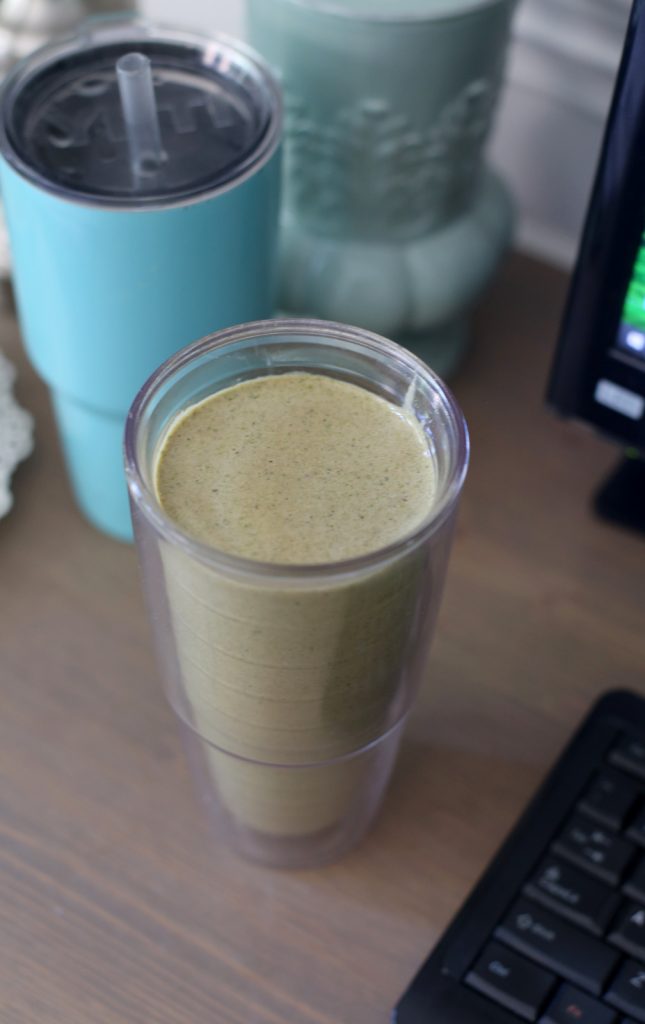 I sipped my smoothie as I cranked out as much work as possible while Ryder snoozed and then I played with our happy little guy until we had to leave to pick Chase up from school. 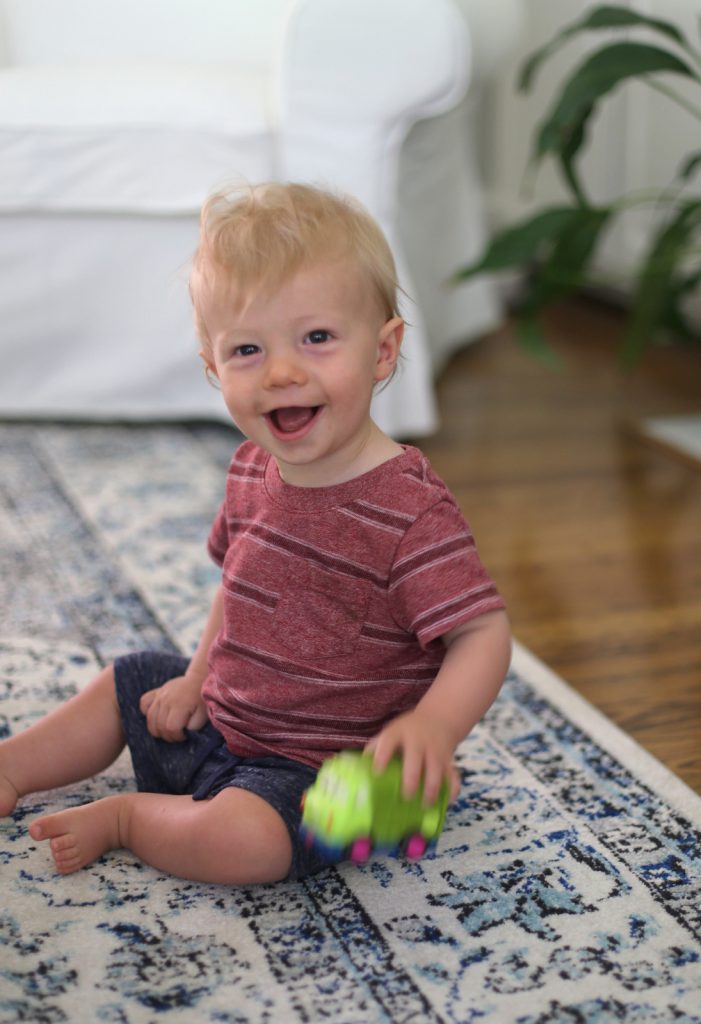 Side note: I think it’s time for Ryder’s first haircut. I think I may put his little baby mohawk wave into a ponytail so they cannot cut it at all but have them trim up the sides and back of his hair soon. I don’t think my mama heart can handle having the long, fluffy hairs on the top of his head trimmed just yet.

We spent some time on the playground outside of Chase’s school after pickup so the boys could enjoy some sunshine before we headed back home. I did my best to get some food in their bellies before nap time and even though Chase’s nap time looked more like quiet time in his room with books, I had a little reprieve to assemble myself a lunch made of leftovers. 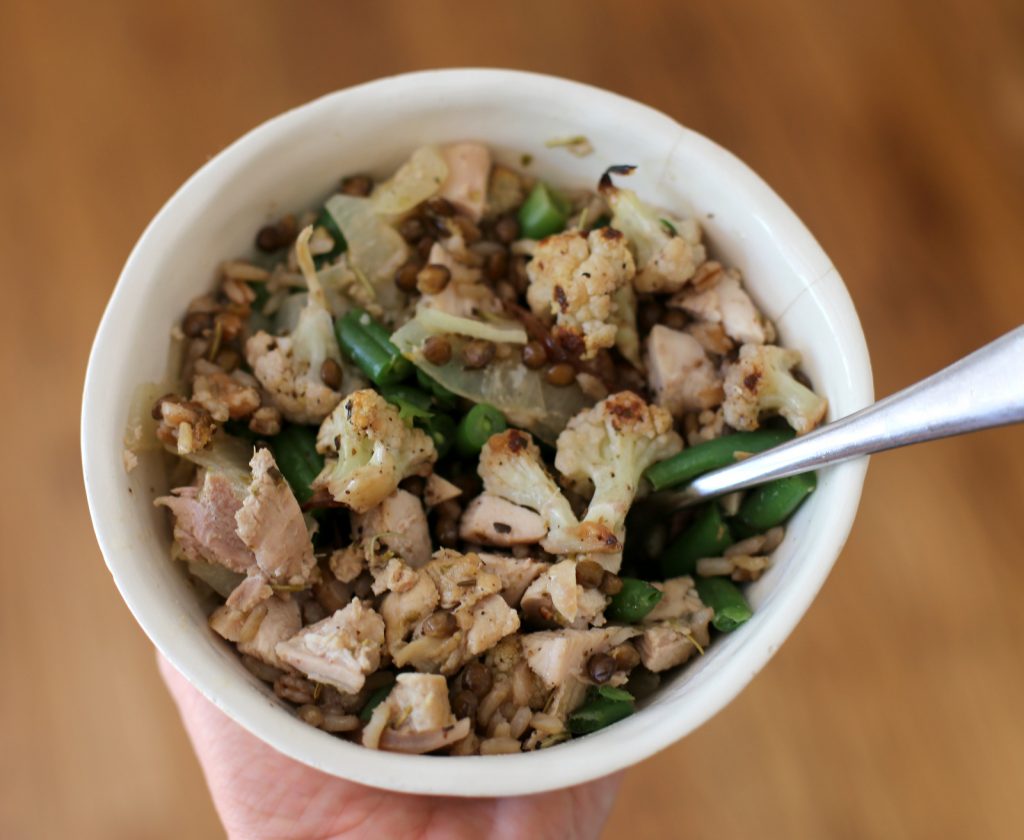 Lunch looked like a combination of brown rice, lentils, chicken thighs, green beans and roasted cauliflower. I cooked up a batch of the chicken thighs on Sunday night using my favorite Paleo chicken thigh marinade to use in lunches this week and love having them easily accessible in the fridge. My friend Carrie recently tried my marinade recipe but added a whole onion to it and told me how much she loved it that way, so I tried it out on Sunday as well. I can’t say I’m all that surprised I enjoyed it so much because I love onions in just about everything, so definitely add an onion to the recipe next time if you’re the same way!

I ate my lunch as I worked on the computer and also took a little break to throw in a load of laundry and vacuum the kitchen (a never-ending cycle of baby food messes) before the boys were done with nap time/quiet time.

I made it a point to keep the boys home yesterday afternoon since we have plans every other afternoon this week and figured we could use a quieter afternoon. Plus, we had someone stopping by to measure our kitchen backsplash and give us a quote and we’re now waiting on the estimate. For those who encouraged me to carefully consider grout color, we’re going with a white grout paired with the white tiles. The man who measured our backsplash said that’s a common choice so the backsplash isn’t too “noisy” or distracting.

During our afternoon at home, the boys and I had fun reading books and kicking/rolling the soccer ball around before I put a blanket on the floor and Chase and I played several rounds of Slap Jack while Ryder had free rein of the toys. (There’s something about laying a blanket out on the floor that makes Chase think whatever activity we’re doing is extra special.)

By the time Ryan made it home from work, we were more than ready to eat. Dinner last night was a simple one! 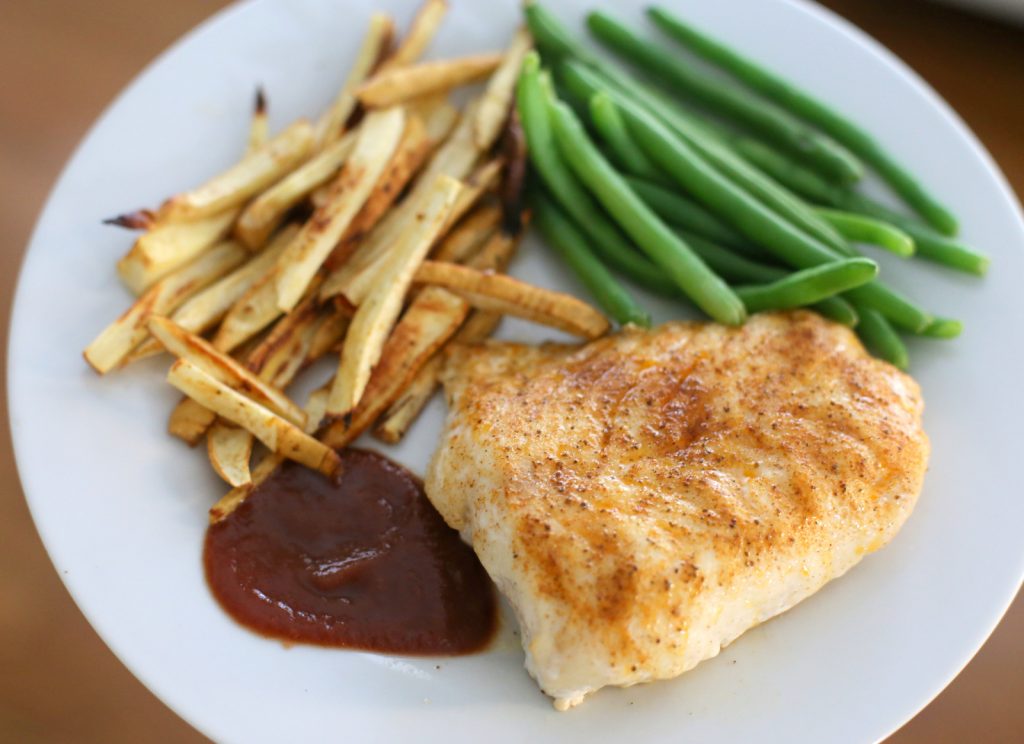 I defrosted grouper we had in the freezer and baked it in the oven after rubbing it with olive oil and seasoning it with a bit of Old Bay. On the side, we enjoyed parsnip fries (I used to make these ALL the time and forgot how much I LOVE them), ketchup and green beans.

After dinner, I put Ryder to bed and then kissed Ryan and Chase goodbye as I headed out the door to meet up with my small group at a local coffee shop. I also scooped a couple of scoops of ice cream into a mug to eat on the drive over because I was craving ice cream on such a hot evening. It hit the spot and I need to do ice cream to-go more often.

I loved the uninterrupted time with my girlfriends and really enjoyed discussing our latest study as well as our lives in general. I’ve been meeting with the same small group for more than three years now and cannot say how important these women are in my life. They encourage me without judgment and since we’re all in a similar phase of life, it’s so nice to be able to have honest conversations that are only met with support and understanding.

I arrived back home to find Ryan in bed reading and the two of us chatted for a while before I changed into my pajamas and joined him in bed with my latest book. I’ve been reading The Wicked City for more than a week now because I cannot seem to stop falling asleep after reading only a few pages. It’s actually kind of annoying because I’m enjoying the book a lot and want to be able to read more of it at night but apparently my body needs more rest these days!

Now I’m off to get this Wednesday started! Chase is beginning swim lessons this afternoon and I’m doing my best to hype them up like crazy since this will be his first “big kid” swim lesson experience. Ryder and I will be cheering him on from the sidelines and hoping for the best since Chase has never been one to love going under or getting his hair wet. When I told Chase yesterday that he’s going to learn how to swim without his floaties, he was super excited so I’m praying his enthusiasm lasts!

I hope you all have a fantastic day and enjoy the rest of the week!

« More of THIS All Summer, Please
My Favorite Cookbooks »