Good morning, beautiful friends! How are you? How was your weekend?

My weekend was relatively low key but after a few busy weekends in a row, it felt good to dial things back a bit and enjoy time with Chase and Sadie. Ryan was out of town this weekend (he left Thursday night and returned late yesterday afternoon), so it was just me and my babies all weekend!

I filled a lot of Chase’s awake time on Thursday and Friday with play dates with friends so by the time Saturday rolled around, I was actually looking forward to staying relatively close to home. I only had one thing on the agenda for Saturday and that involved decorating our house for fall!

Our morning began around 7 a.m. when Chase started to make some soft noises in his crib. When I hear his first noises, that usually means I have 15-20 minutes or so until he is really up for the day, so I headed downstairs to make myself breakfast (waffles + eggs again!) and down a cup of coffee with collagen and whole milk.

I had just enough time to finish eating when Chase let me know it was go time for the day! I headed back upstairs to nurse him and change him before bringing him downstairs for playtime and breakfast. I wanted to take advantage of the slightly cooler morning weather and decided to take Chase and Sadie out for a walk around the neighborhood once breakfast was all cleaned up. 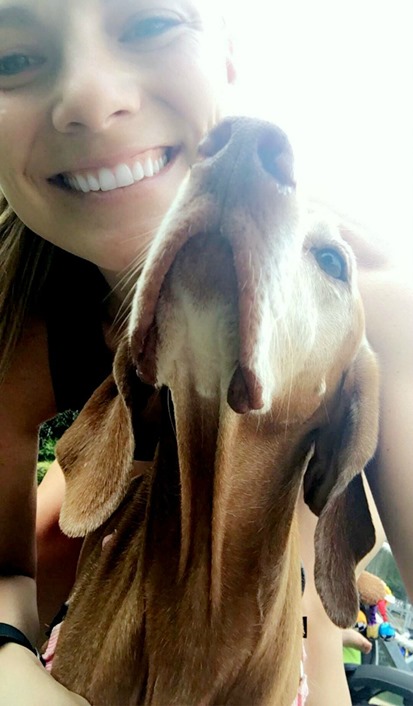 I played the Hamilton soundtrack during our walk and tried hard not to sing aloud when we passed strangers on the sidewalk. Jammin’ out to Hamilton inspired me to look to see if the musical has any plans to travel to the Charlotte area in the future and was severely disappointed by my findings. Now I think a trip to NYC may need to happen because I have to see this one! (Get ready for a visit, Merri!) 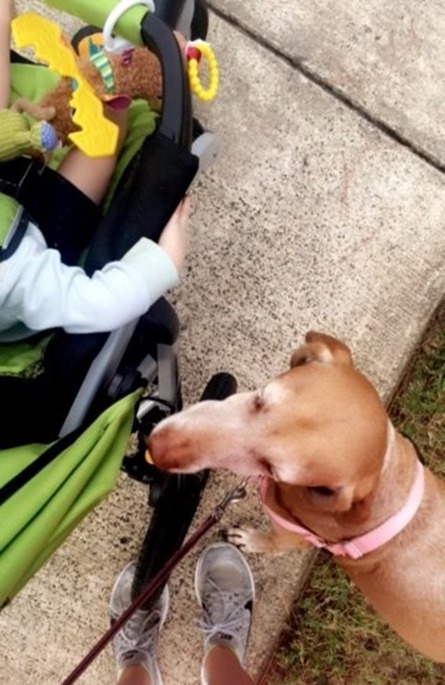 By the time we made it home, Chase was ready to be OUT of the stroller, so while he walked all over the place with his walker, I got a jump start on decorating for fall. 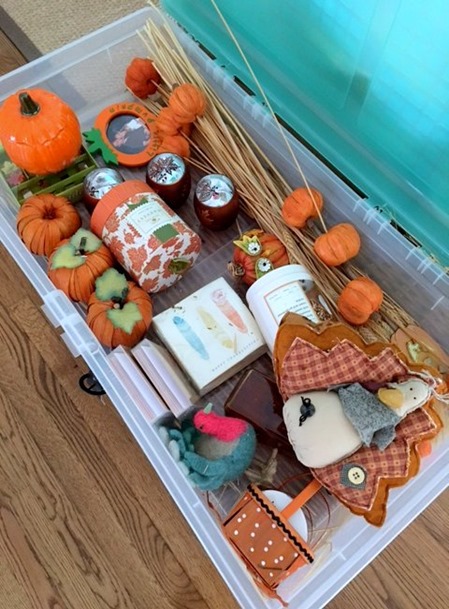 Now we just need the weather to catch up to my autumn spirit. I am longing for cool, crisp mornings!

Chase’s morning nap was a good one – a solid two hours – and once he was up, we ate lunch together (this involved Chase feeding me 10,000 blueberries) before we said goodbye to Sadie and drove off to a local block party! 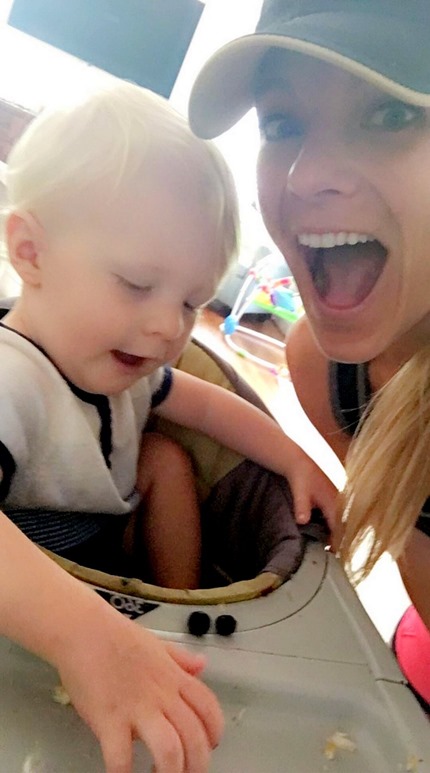 My friend Brittany texted me about the Mooresville Gateway Block Party earlier in the day and I thought Chase might enjoy checking out the goats and watching the big kids run around. 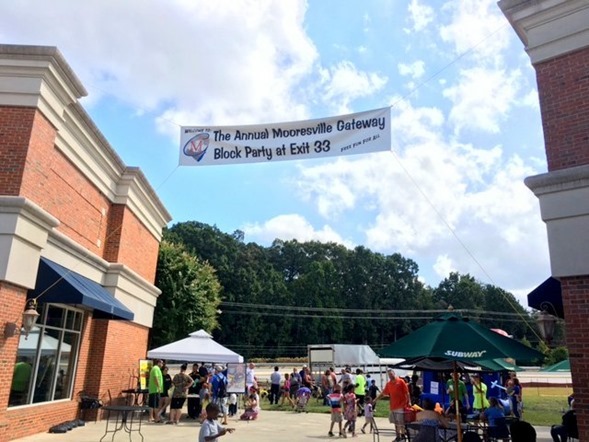 We had a great time and Chase was enamored with the animals! He wasn’t so sure about the goats at first but eventually mustered up enough bravery to pet them. Ryan has an odd fascination with goats, so naturally I texted him a picture of Chase with his favorite animal to send him some love! 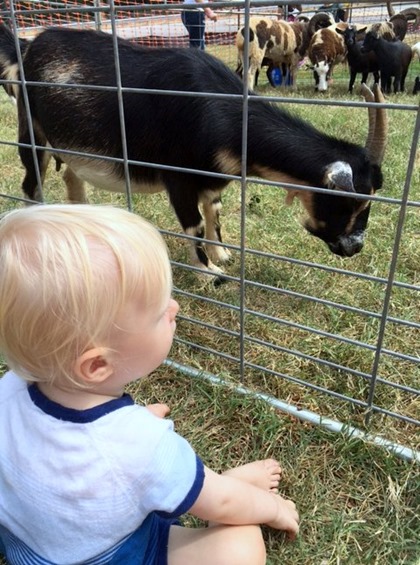 After our time at the festival, we ran a few errands on our way back home. I cut some of my errands short because I thought Chase needed to head home for a nap but apparently another nap was not in the cards for Chase on Saturday.

I laugh now, but when I initially thought I had a weekend to myself with Chase and Sadie, I thought I’d get way ahead on work. Hahahahaha! Apparently I forgot that Ryan wasn’t going to take Chase with him on his travels. Saturday was one for the books because Chase had more energy to burn than I’ve ever seen! He was a wild man and I couldn’t get him to bed until 8:30 p.m. So much for getting any work done!

Since I kept thinking Chase would eventually need a nap (or at least go to bed early if he skipped his nap), we stayed at home for the rest of the evening and spent time baking cookies from my favorite cookie cookbook, eating dinner, playing with Sadie and going through my latest thredUP delivery! 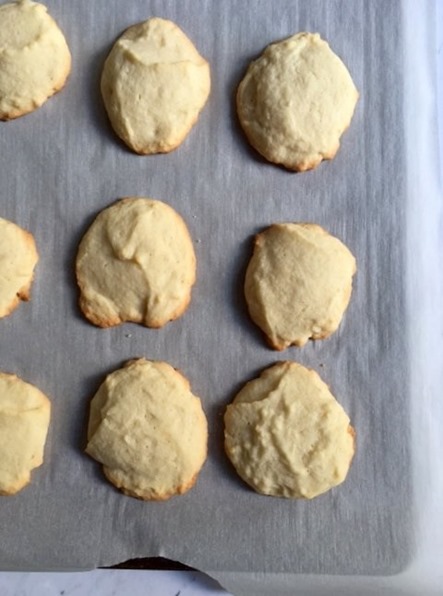 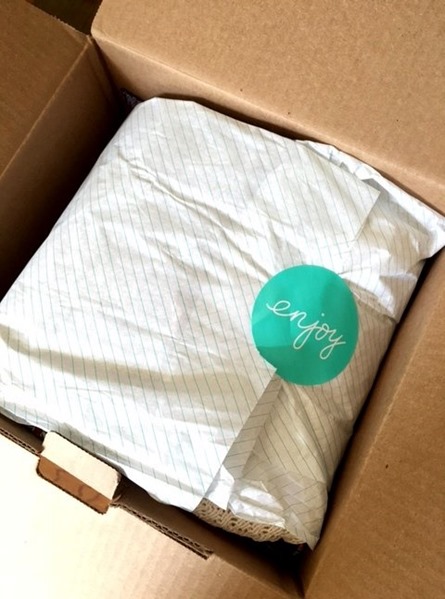 By the time Chase was finally ready for bed, I was absolutely exhausted and couldn’t wait to finish reading my book in bed. Phew!

Apparently Chase’s lack of sleep on Saturday caught up to him on Sunday because he ended up sleeping in until 8:30! What!? I felt like super mom all morning because I had so much time on my hands! I started typing up this blog post, responded to a few emails and planned our meals for the week.

The day I make each meal may change but here’s a glimpse at the five meals I have planned for the week ahead:

By the time Chase was up for the day, I felt awfully productive so it was a good start to our Sunday! I spent the rest of the morning tackling a load of laundry, playing with Chase and Sadie and making a batch of teriyaki meatballs and a frittata to reheat throughout the week. Eventually 11 a.m. rolled and Chase was in need of a nap. After a few weeks of some pretty darn predictable and stellar naps, this weekend was all over the place for our little man! He slept for an hour which gave me just enough time to sneak in a workout and a quick shower.

Sunday’s workout began with a 15-minute warm up jog (that included some lip syncing to “Defying Gravity”) on the treadmill. I followed up my short run with my Back To Basics Arm Workout and called it a day. 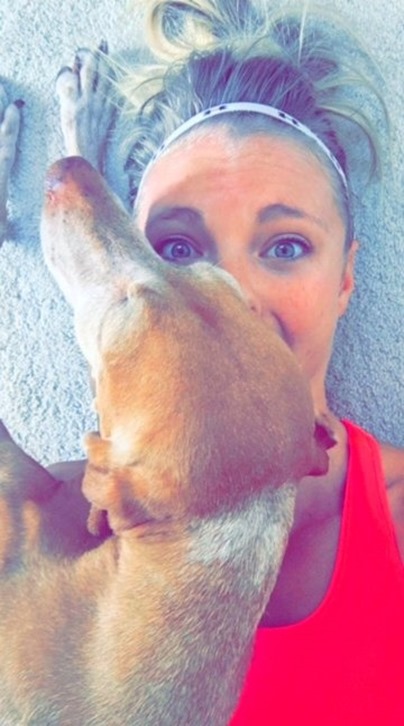 Sadie joined me for stretching after my workout. At least someone likes my sweat!

With Chase up again and ready for action, the two of us ate lunch together in the kitchen. This looked a lot more like Chase throwing food everywhere, so eventually I decided maybe a smoothie date would be more successful and we headed off to Clean Juice in Birkdale Village to share a smoothie! 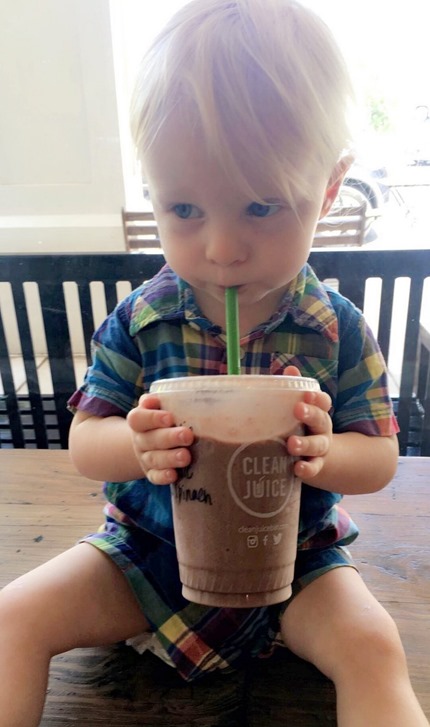 Chase is a smoothie lover for sure and did a decent number on our smoothie made with banana, strawberries, almond butter and spinach. With our smoothie along for the ride, we stopped by the Splash Pad for 10 minutes or so and Chase was quite intrigued by the spraying water. 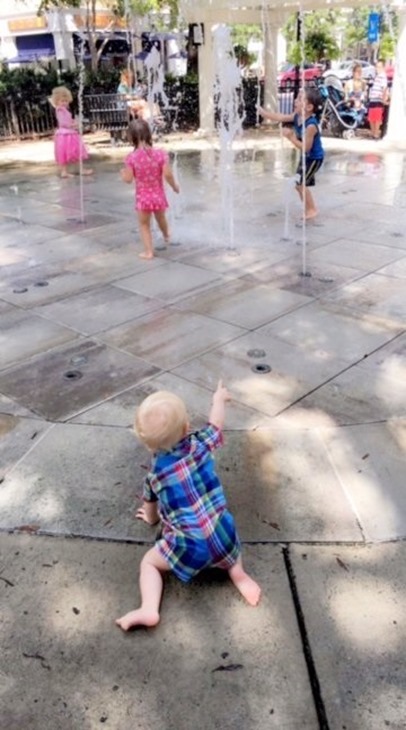 He’s slowly getting braver around the splash pad. I think next summer he’ll be all in!

We spent the next hour browsing around Birkdale Village until we had to leave to pick up Ryan from the airport. The Charlotte airport has free parking for the first hour and since the stationary cell phone lot and a mobile baby don’t mix, I parked my car and Chase and I headed inside to wait for Ryan at baggage claim. 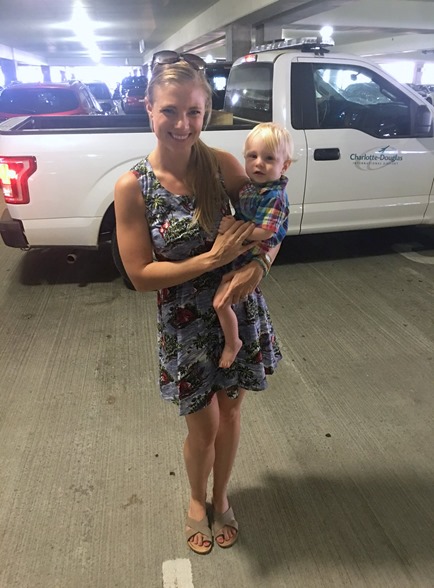 The airport was a hit and all of the people did a decent job of distracting Chase who was in desperate need of a nap. Chase lit up when he saw Ryan and the two of them spent the car ride home playing silly games in the backseat. We missed Ryan so much!

We spent the rest of our Sunday grocery shopping and spending time together at home as a family before crashing in bed around 10 p.m.

I hope you guys had a good weekend!