Navigation
Here’s the second (and final) recap from my super-quick trip to Hershey, Pennsylvania!

Catching up? Here is part one: Arrival in Harrisburg

The second day of my trip to Hershey with Hershey (yes, the town is named after the founder of The Hershey Company) began at 7:45 a.m. when our group of bloggers met in the lobby of the Hershey Lodge before heading over to the Hershey Technical Center to kick off the morning. 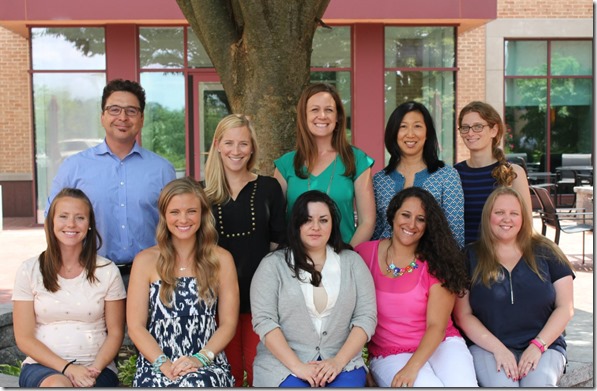 At the front desk of every Hershey building we visited and in all of the break areas, big bowls of free candy are filled daily for Hershey employees to enjoy. 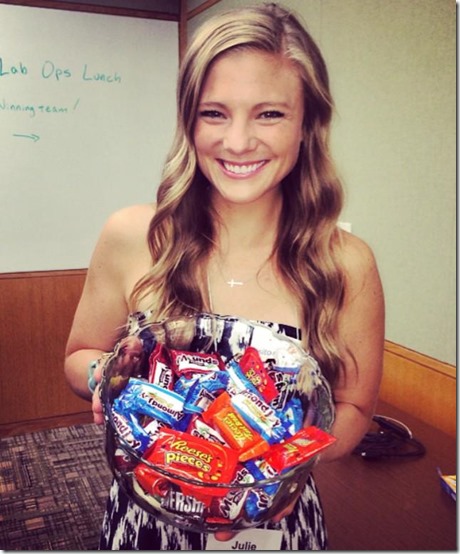 File this under: Way too tempting!!

While we ate breakfast at the Technical Center, we listened to a short presentation from Allison Kleinfelter, Hershey’s bubbly senior manager of strategic communications, and provided feedback to the company about what food transparency means to us. Our feedback ranged from believing that food transparency is leaving everything out in the open for the public to read and understand to skeptic thoughts believing that “food transparency” is an overused PR term that leaves a lot to be desired. Allison took note of our feedback and encouraged an open and honest discussion before it was time to get dressed in some snazzy lab coats and hairnets and head off to learn about chocolate product development. 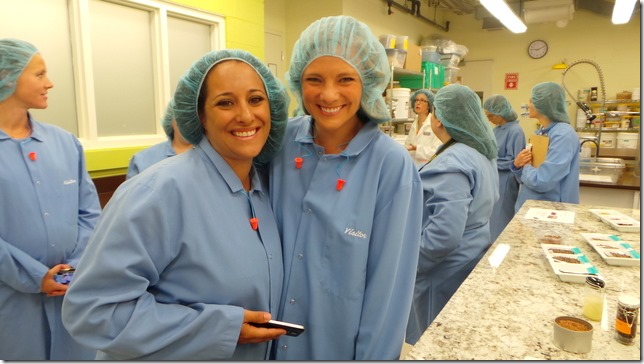 (Vanessa + Me — Loved meeting Vanessa and hanging out with her!)

The time we spent in product development was one of my favorite parts of the day since we were able to get a little creative and make our own chocolate! 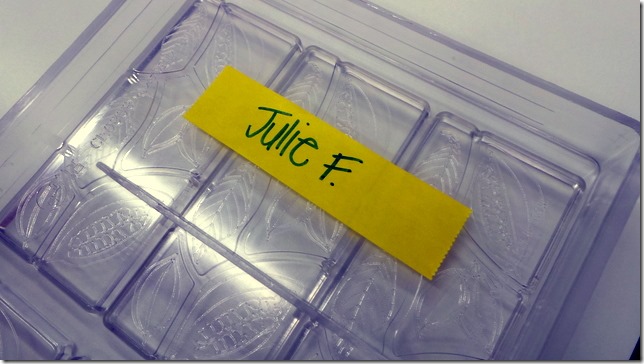 Our inspiration was The Artisan Palette, an idea sent from the marketing team for a gourmet chocolate bar that highlights flavors that might otherwise be hidden by placing ingredients on the top of a chocolate bar. 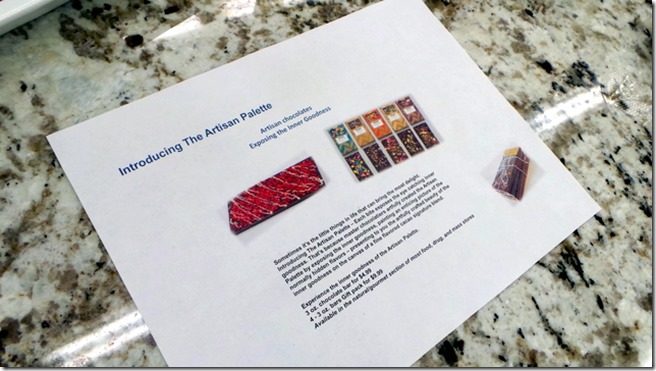 We poured milk and/or dark chocolate into a mold and after placing the molds on a vibrating tray to release any air bubbles in the chocolate, we sprinkled toppings of our choice on top of our bars. 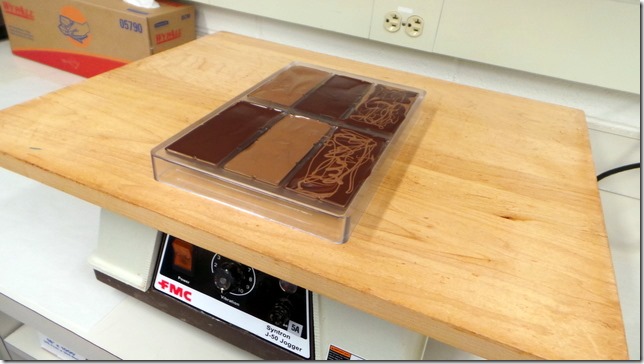 I used most of the toppings provided but gravitated toward nuts, sea salt and toasted coconut for most of my bars. 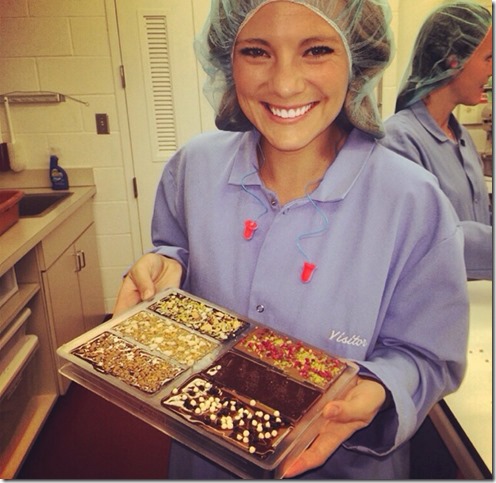 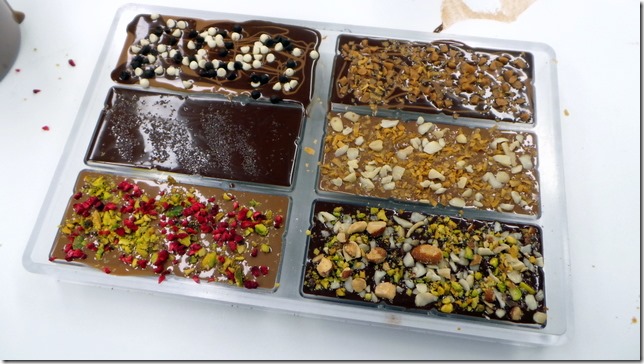 Before we left, we placed our bars in a large refrigerator to cool before we were able to take them home with us as a special treat. (I ate my toasted coconut, sea salt and macadamia nut bar on the plane and it was so good!)

And then we were off to Sweets and Refreshments Product Development where we learned about the process of cooking caramel and the reasoning behind some of the lesser-known ingredients in caramel. For example, lecithin is used to prevent separation in caramel and can impact viscosity, crystallization and sticking. 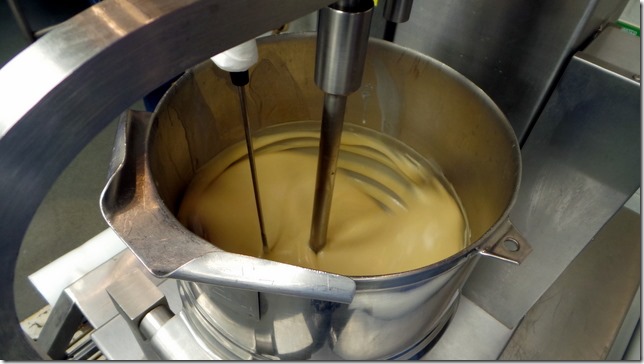 Once the caramel was done, we were able to each take some to pour into a small box and I added roasted almonds and sea salt to my batch. 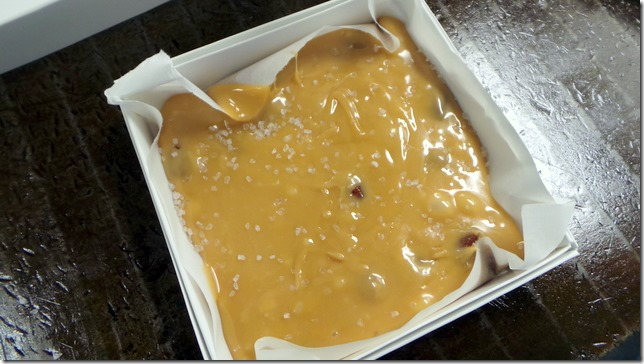 Since the caramel was still too hot to try before we left, I grabbed a sample of the new LANCASTER Soft Crèmes to satisfy my sweet tooth. It melted in my mouth and tasted buttery and delicious.

The next stop on our tour took us on a behind-the-scenes look at the Hershey test kitchen… aka a food blogger’s dream! 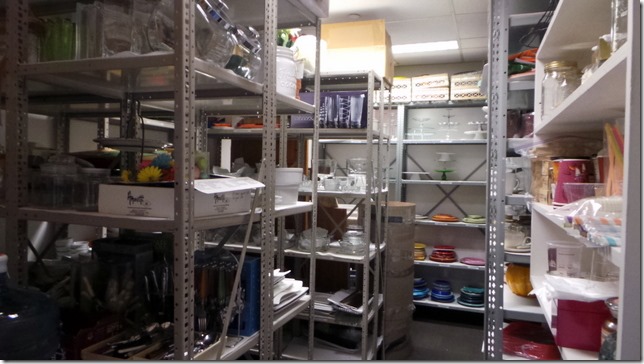 When Hershey chefs create and test recipes, they must use ingredients readily available at most grocery stores. 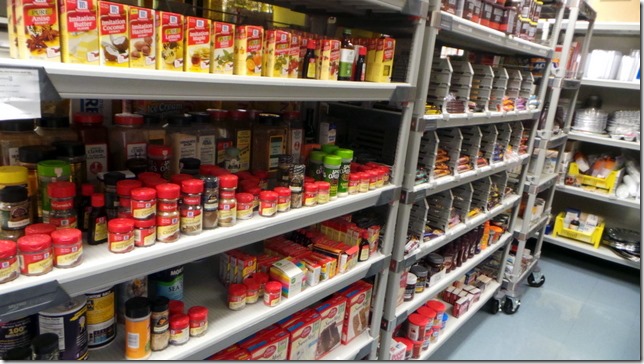 We were able to sample a yet-to-be-released gluten-free HERSHEY’s famous Perfectly Chocolate Chocolate Cake and give feedback using the same forms those selected to taste test recipes use. 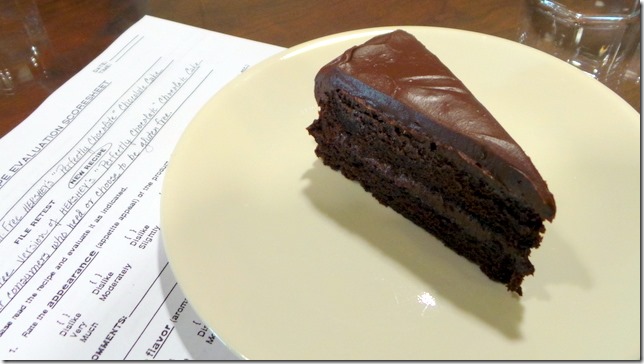 It was delicious and all of my feedback was positive. It was slightly more dense than typical chocolate cake, but not in a bad way. And the icing was unreal! Let me know if you guys want the recipe and I’ll be sure to share it.

I ate nearly all of my cake (a pre-lunch snack?) before we had one more session to attend that focused on sensory science. 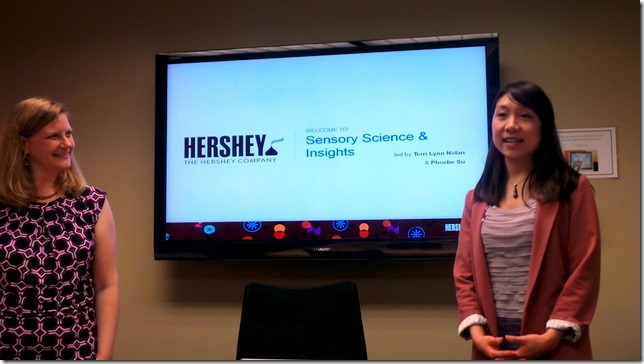 Through a small taste test, it became quite clear just how much smell and sight impact taste. 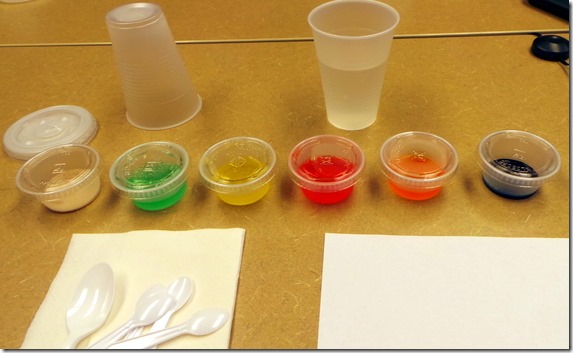 For the first test, we were asked to pinch our nose to block our sense of smell and take a bite of a sugary mixture. We all could taste sweetness, but when we released our nose, we were hit with the intense smell of cinnamon. Apparently cinnamon has no taste and it’s our sense of smell that gives cinnamon its flavor. This absolutely blew all of our minds and had I not tried this taste test first-hand, I wouldn’t believe it. Cinnamon must have a flavor, right!? Wrong. So crazy!

When it came time to try the colored gelatin, we had to guess the flavor in each cup. Unbeknownst to us, the flavors we normally associate with certain colors were all mixed up. Red was actually orange, green was actually lemon, etc. It was crazy how much the visual image of the color influenced our perception of the flavor we thought we were tasting. I asked if the test had ever been conducted blindfolded and we were told that when people cannot see the colors of the gelatin, they can correctly identify the flavors with greater accuracy.

For the final part of the sensory experience, we dabbed a bit of dark blue dye on the tip of our tongues to look for the number of fungiform papillae which apparently reveals whether or not you are a supertaster. Approximately 25 percent of the population are super tasters, meaning they experience taste with a greater level of intensity than the average person. To supertasters, certain foods such as broccoli, cabbage, spinach, grapefruit and coffee often taste very bitter and they can be rather picky eaters. I am not a supertaster which didn’t surprise me at all.

Following the sensory session, we ate a quick lunch before it was time to watch two videos, provide additional feedback and participate in a Q&A session with Hershey employees where we learned more about sustainability initiatives, cacao beans, quality control, innovation and manufacturing. 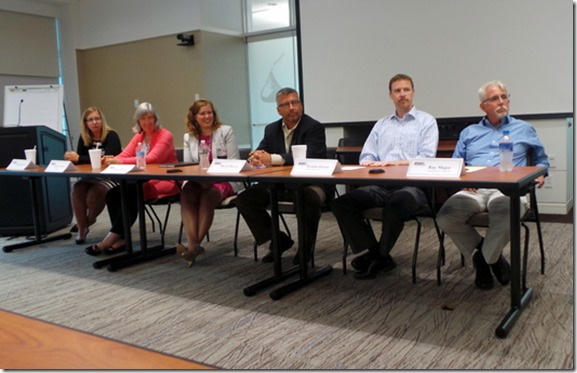 Here are some facts I jotted down during the session that I found particularly interesting:

Following the roundtable discussion, our group kicked the energy up a notch and had the chance to spend about 45 minutes inside of HERSHEY’S CHOCOLATE WORLD! 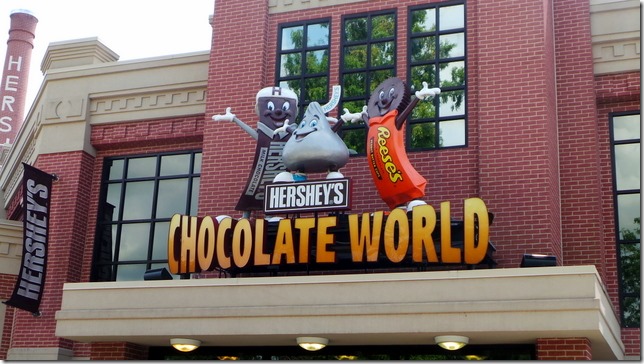 We used our free time to shop, eat chocolate (obviously) and ride the Great American Chocolate Tour ride which was perfectly cheesy. 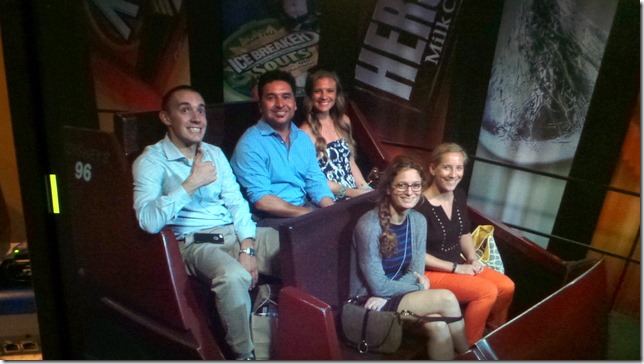 Big thanks to Hershey for a fun and delicious time in Hershey, Pennsylvania! I had a blast!

Disclaimer: This blog post and my trip to Hershey, PA were sponsored by The Hershey Company as part of my participation in their Food Ambassador program. All thoughts and opinions are my own.