Navigation
Hi guys! How are things going in your neck of the woods? All is well over here even though I’m feeling a little bummed because my dad left last night and I’m not sure when I’ll see him next. It’s always easier to say goodbye to family when you have the next visit scheduled on the calendar, but I’m hoping something will come to fruition in July. Fingers crossed!

Yesterday kicked off bright and early with a pre-prepared breakfast (hooray for food prep!) that included a slice of a kale and sausage frittata with a square of baked steel cut oatmeal served with coffee and a hefty pour of Fairlife whole milk. 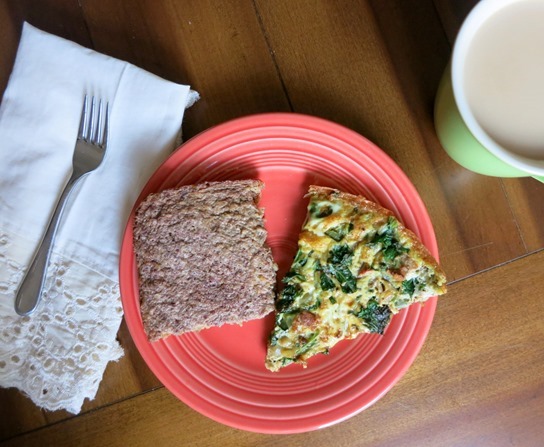 I ate breakfast with Chase and my dad and we chatted for a bit before Chase and I took off for boot camp. It was leg day at Burn Boot Camp which I love to hate and yesterday’s workout was jam-packed with walking lunges which are the WORST. Ugh. 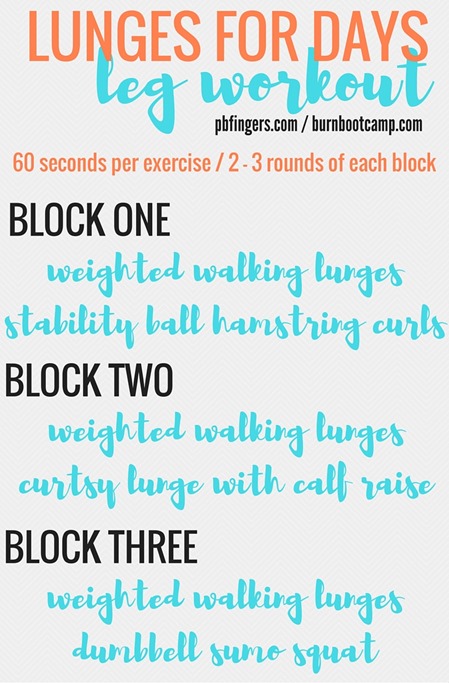 In between rounds, we completed a plyometric burst of 45 seconds of tuck jumps. Phew! As someone who detests walking lunges (especially weighted walking lunges), I can’t say I loved this workout, but I did love the feeling I had when it was over. You simply can’t beat those endorphins, baby!

After chatting with some of my BBC buddies after my workout, Chase and I headed home and he was more than ready for his first nap of the day. After I got him settled, I grabbed a quick shower before meeting my dad back downstairs and joining him for a late morning snack that included an egg white oatmeal protein pancake paired with a second cup of coffee with whole milk and scoop of collagen. 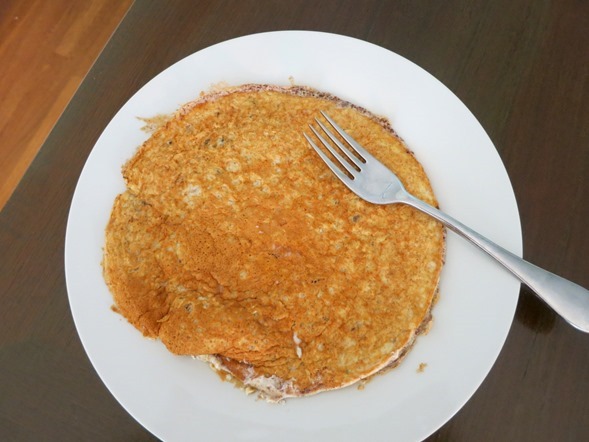 We chatted in the kitchen for a while before I headed into my home office to get some work done while he read on the swing in the backyard with Sadie.

You guys something amazing happened yesterday – Chase napped for three hours in the morning! Since he was basically on a nap strike and didn’t nap for much more than 45 minutes at a time last week, I was practically running around the house high-fiving everyone. Of course this long nap threw off our usual afternoon and made for a rather cranky baby after his afternoon swim lesson since no second nap occurred, but it was still an awesome phenomenon that I know will likely not happen again anytime soon.

Once Chase woke up, my dad and I spent some time playing with our little ball of energy before we could tell he needed to get out of the house. (I joke that Chase has a 20-30 minute tolerance of our family room these days before he needs outside stimulation.) 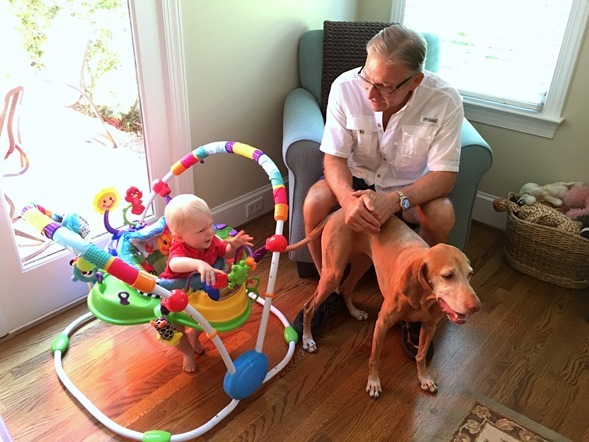 We went for a 45-minute walk at a local park before heading home for lunch. 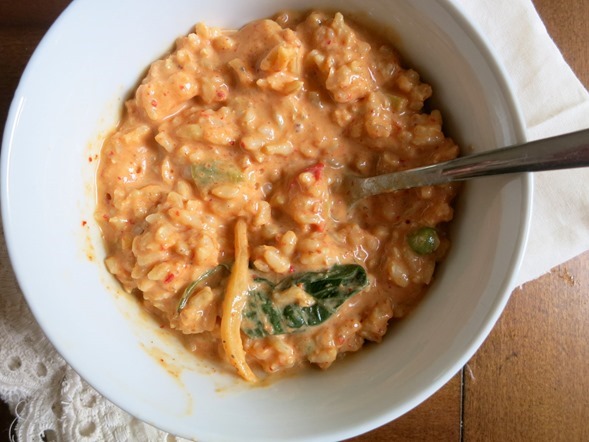 I reheated some Thai takeout from Sunday night’s dinner and Chase ate chicken sausage, apple and some avocado… And by “ate” I mean he threw 99 percent of the food on the ground where Sadie carefully picked out the chicken sausage and left the apple and avocado for me to clean up. (She’s a picky little princess.) 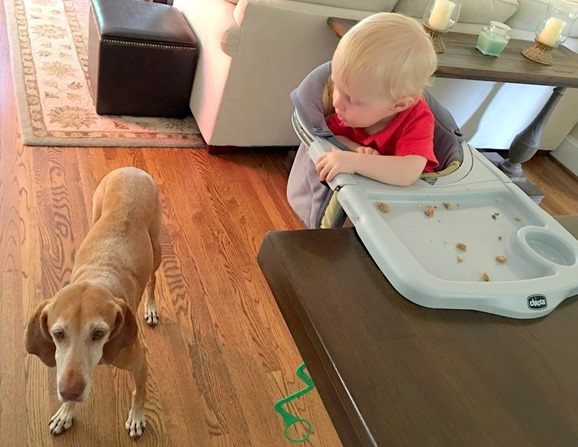 After a late lunch, it was time to change and get ready for Chase’s swim lesson. I knew I was probably pushing my luck by taking him to swimming without an afternoon nap under our belt but he seemed happy and wide awake, so I decided to go for it. 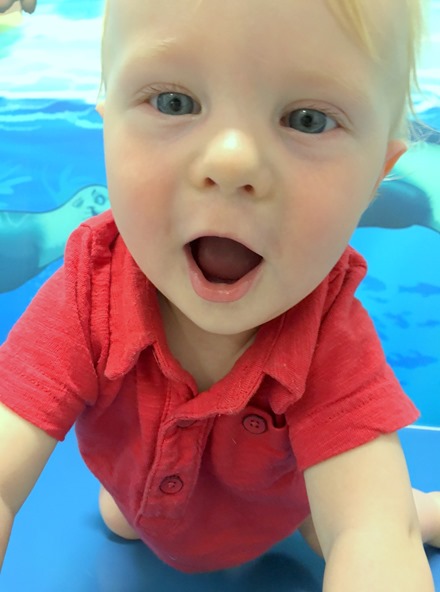 He was relatively smiley the whole time but the car ride home was another story. Yeesh.

We got caught in a lot of traffic and didn’t make it home until close to 5 p.m. Once we walked through the door, I did my best to soothe a crying baby and settle him down before putting him to bed early. Though a three-hour morning nap was awesome, I think I can safely say it’s probably not best for Chase’s usual schedule to nap long in the morning and skip an afternoon nap. He was exhausted!

Once Chase was in bed, dinner came together quickly thanks to some prep work I did yesterday and within 15 minutes, my dad, Ryan and I were digging into chicken cabbage bowls with sesame ginger broth. 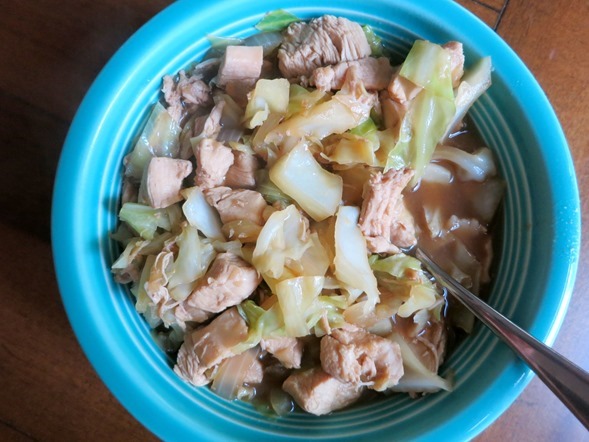 After dinner, I had to say goodbye to my dad which was such a bummer. I am so glad he was able to stay for as long as he did and it meant so much to me to see his relationship with Chase grow so much in the short time we had with him!

After the guys left for the airport, I sat down at the computer and ate my bodyweight in granola and mixed nuts while I worked for a few hours before hanging out with Ryan for a bit before bed.

And that catches us up!

I hope you guys have a fantastic Wednesday!