Hey, hey! How are you guys doing? I hope your Monday was a good one!

I actually managed to snap pictures throughout the day yesterday in an effort to recap what a random Monday looks like around here and figured I’d share them with you today in a post that is reminiscent of the PBF days of yore when I actually had the ability to blog in real-time and share day-to-day updates with you guys.

Maybe one day I’ll get back to blogging that way, but life doesn’t seem to allow for that kind of blogging these days (planning and working ahead is the name of the game around here with a little one), so until then I hope to still sporadically share some of these personal peeks into our life. (Following me on Snapchat is probably the best way to see the behind-the-scenes stuff! Username –> juliepbfingers)

Since I was pretty bad about sticking to my usual schedule and working on my Monday morning blog post on Sunday, I ended up waking up at 5 a.m. to type up yesterday’s blog post and get it published before Chase was up for the day. 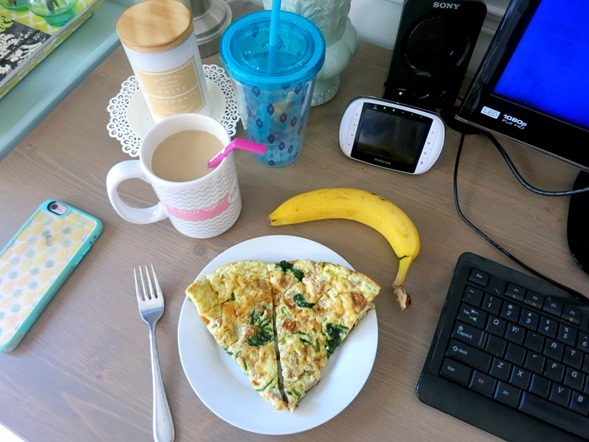 Thankfully a pre-prepared frittata made breakfast a breeze and I ate two slices along with a banana and a mug of coffee made with a tablespoon of collagen and a splash of Fairlife whole milk.

Chase started to fuss a little before 6 a.m., so I headed upstairs to nurse him. He seemed rather sleepy after he was done feeding, so I placed him back in his crib and crossed my fingers for another hour of baby sleep/mama work time. My wish was granted and I worked away until Chase was up for the day around 7:30 a.m.

I am still nursing ALL the time and am trying to cut back on some of Chase’s feedings to encourage him to eat more real food, so rather than breastfeed him again when he woke up 90 minutes after his last feeding, I gave him a pouch of pureed apples, kale and spinach and let him pick at some of our dinner leftovers before we headed out for boot camp.

The workout of the day at Burn Boot Camp was an upper body strength workout (my all-time favorite!) and I loved every second. After a five-minute warm up, we went through the following circuit three times: 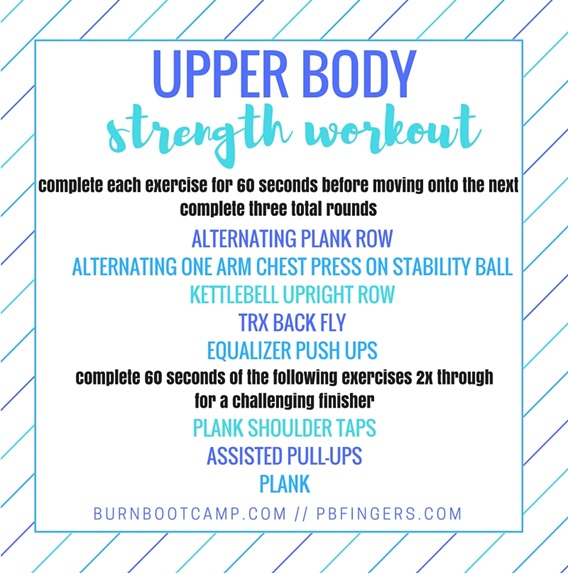 I have been challenging myself to lift heavier weights during my strength workouts and have really been working on my pushups, so it was a great day to lift heavy and feel the burn first thing in the morning.

Once I said goodbye to my workout buddies and Chase’s BBC childcare friends, we headed home and I put Chase down for his morning nap before heading into the kitchen to make myself a morning snack and another cup of coffee. 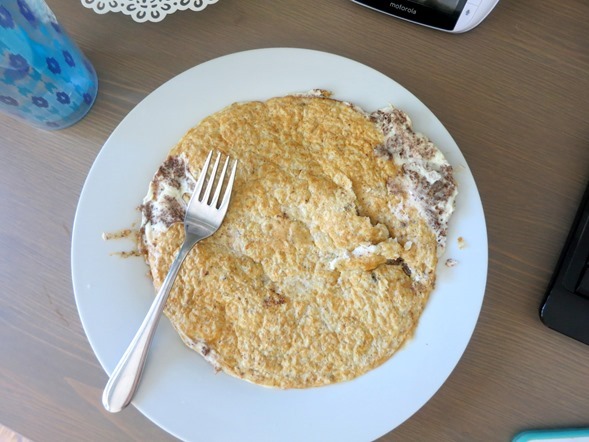 I ate my egg white and oatmeal protein pancake while working on a blog post about collagen, creating the workout image for this blog post and following up with the AC repairman because our upstairs air conditioning stopped working for a few hours yesterday. As always, Chase’s morning nap passed by in a flash. I feel fortunate that Chase almost always naps for a solid two hours in the morning, so I really rely on this time for productivity.

Once Chase was up, we read a book together and played with some toys before lunch. Chase is still obsessed with his learning walker and Ryan and I now have every song it sings memorized. 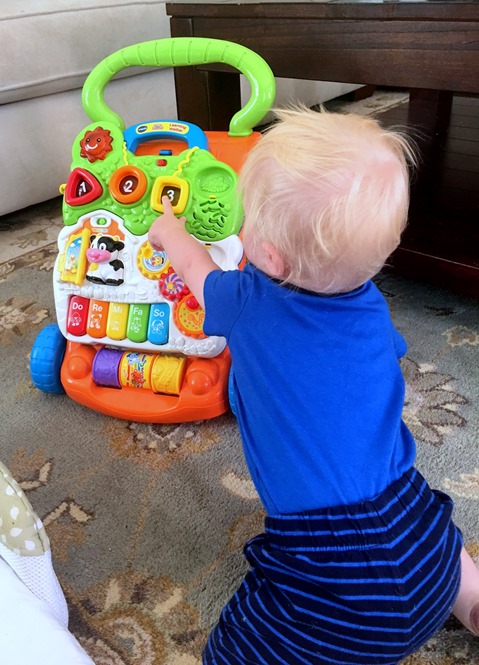 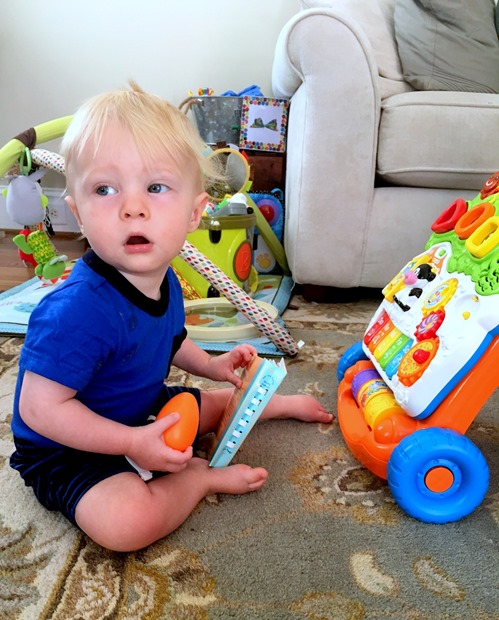 On the menu for Chase for lunch yesterday was an assortment of chicken, broccoli and puffs and I bet you can guess what called to him most… 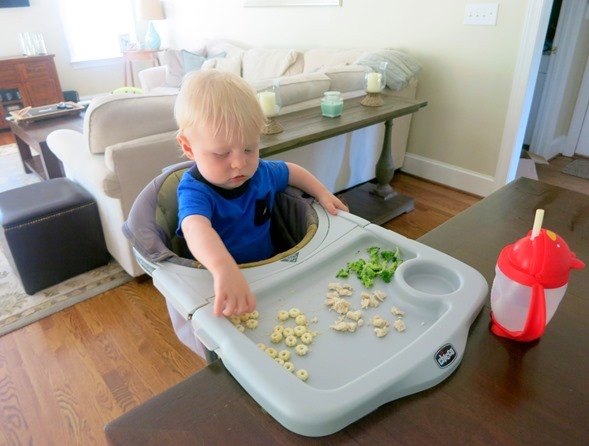 Yep, the puffs. What is it about puffs that drives babies bananas?

Of course Sadie stayed close during mealtime, hoping for rogue bites of chicken. Lucky for her, Chase now thinks it’s incredibly amusing to throw food on the floor, so she made out like a bandit. 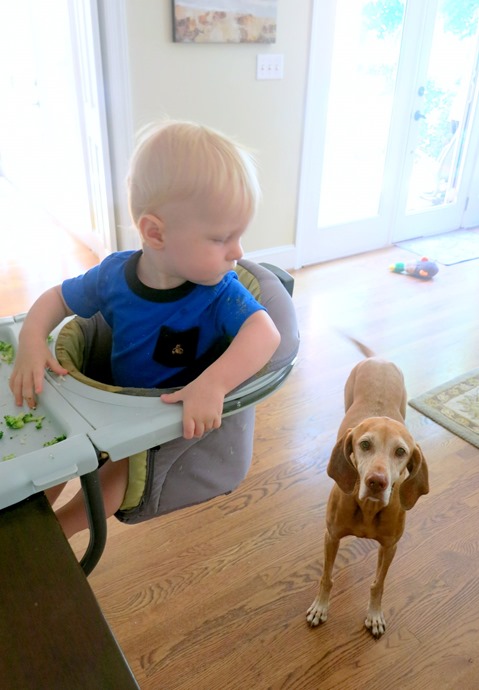 I’ve noticed that Chase eats better when Ryan or I eat with him, so while he ate his lunch, I snacked on an apple dipped in a small batch of Monica’s peanut butter fruit dip made with Siggi’s vanilla yogurt, a splash of maple syrup and Tru-Nut butter. 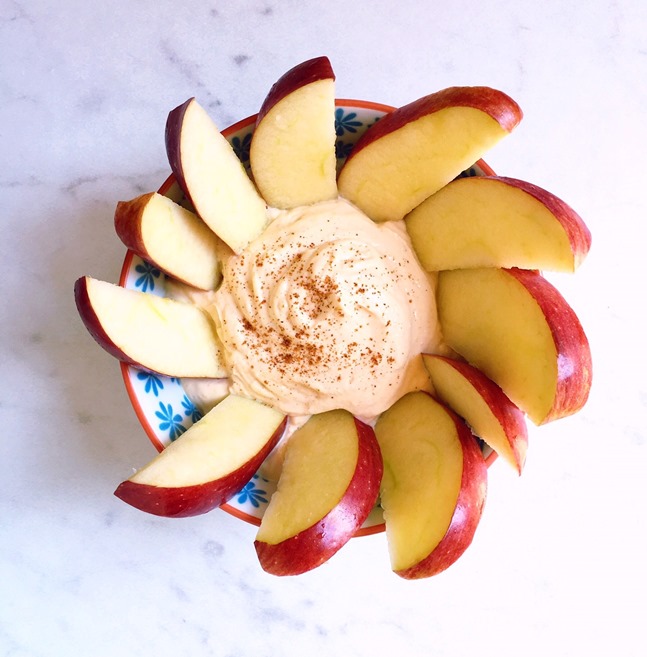 While we were eating, the AC repairman arrived and checked out our unit. Apparently there was a loose valve and another issue that he kindly took care of before saying goodbye. Chase and I usually head out on a play date with friends after his morning nap, but since we had to wait for the AC guy and I wasn’t sure how long our appointment would take, we didn’t make any plans and had a free hour or so to kill before Chase’s afternoon nap. Since I could tell Chase wanted to get out of the house, I figured I would cross ordering a couple dozen bundtinis from Nothing Bundt Cakes for Chase’s birthday party off my to-do list, so we paid a visit to the Birkdale Village location to pick out flavors and place an order. 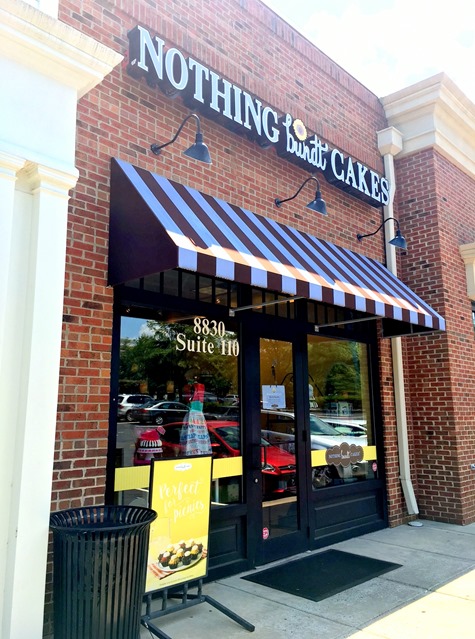 While we were there I couldn’t resist diving into a double chocolate chip bundtini and it was so ridiculously delicious. I may have a hard time not eating all of the bunditnis we ordered for Chase’s party before the guests arrive on Saturday!

By the time we made it home, Chase was ready for a nap, so I nursed him and put him down before quickly throwing together a late lunch for myself. I made a mixing bowl salad that included broccoli slaw, chicken, avocado and Naturally Fresh ginger dressing. 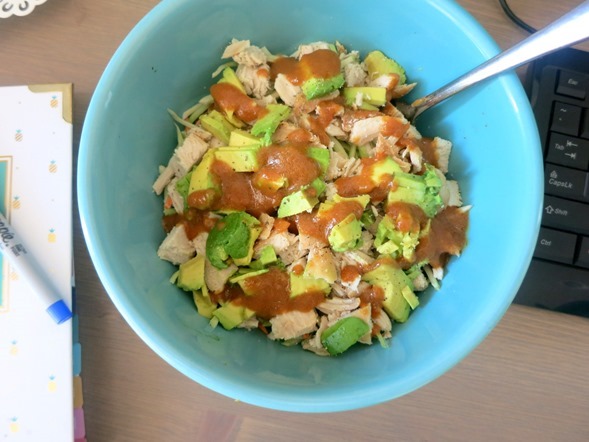 I love using mixing bowls for my salads because they hold more food and make it much easier to stir everything up without spilling. They may not look as beautiful as a perfectly plated salad but they do the trick.

As I ate my salad, I hopped back on the computer to start typing up this blog post and worked until Chase was up again. Chase didn’t settle in his crib as quickly as usual for his afternoon nap, so he ended up falling asleep later than his usual 2 p.m. naptime. I didn’t want to wake him up to make his afternoon swim class because I’ve learned the hard way that disrupting a solid nap is a recipe for swim class disaster. Fortunately our swim class has a one-class-per-month makeup policy, so I call to reschedule his class for another day and let Chase sleep while I worked away.

Before too long, Chase was up again and we went into evening play mode! There’s something about the stretch between Chase’s afternoon nap and bedtime that makes him extra chatty and explorative. I let him crawl around, climb on everything and we babbled back and forth, making ridiculous noises to each other before heading into the kitchen where I set Chase up with some Tupperware to play with while I got a jump start on dinner and snacked on some almonds. Ryan and I didn’t get the chance to make it to the grocery store on Sunday, so dinner was a hodgepodge of things we already had and freezer food.

I defrosted some Whole Foods’ sockeye salmon filets and served them with mashed sweet potatoes and mashed garlic butter cauliflower. 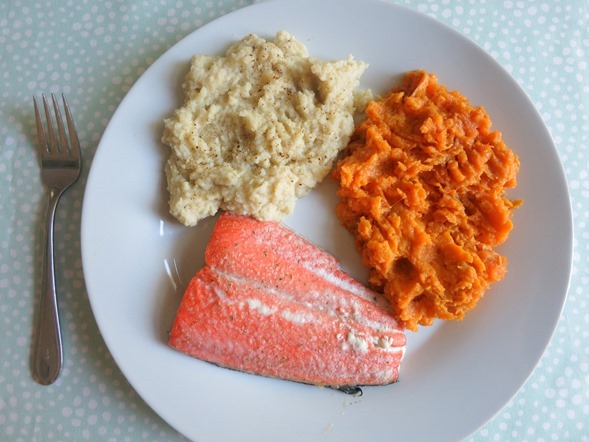 When Ryan has to work late, I usually eat with Chase before he gets home but he fortunately made it home in time for us to eat as a family yesterday. We got a kick out of watching Chase shove tiny handfuls of salmon into his mouth and I’m pretty sure salmon is his favorite form of protein. I was one heck of a happy mama as I watched him go to town on the fish and broccoli we put on his high chair tray.

We spent the rest of the time before Chase went down for the night playing with him and laughing as he tried to climb over anything and everything. He is a baby on a mission these days!

Eventually it was bedtime for Chase, so I nursed him and put him in his crib where he happily chatted away and did some random baby acrobatics before settling and falling asleep within 10 minutes.

Once Chase was in bed, I threw a load of laundry in the washing machine while Ryan made up the beds in our bonus room for my family who will be arriving later this week for Chase’s birthday party. I then grabbed a cup of Siggi’s coconut yogurt and topped it with various toppings for some crunch and used it to fuel me through evening work time at the computer before I joined Ryan and Sadie on the couch for an hour or so before bed. 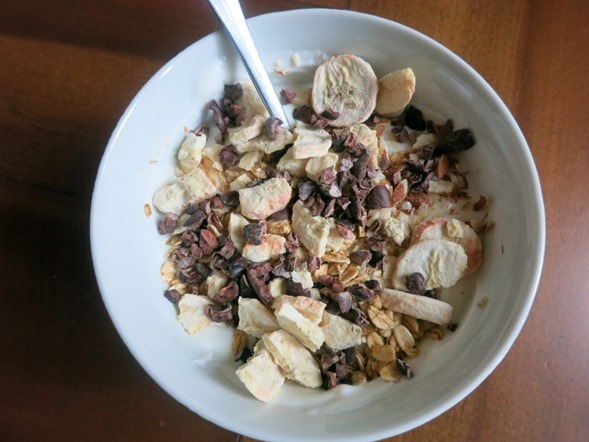 I’m pretty sure I fell asleep within five minutes of my head hitting the pillow last night which was a relief! Chase had me up again around midnight for a feeding but ate well and went immediately back to sleep.

And that was our Monday in a nutshell! A mix of the usual grind and lots of baby and Sadie playtime. Hope you guys had a good one!

« Birthday Party Crafting and Summer Fun
All About Collagen »