Hey friends! Happy Wednesday to ya! I hope you’re stopping by the blog today feeling great! I wanted to share another day-in-the-life post with you guys today, so let’s hop to it. Here’s a glimpse into our day yesterday with an emphasis on food, fitness and family!

I made the mistake of walking away from the microwave after I prepped a microwavable version of my triple chocolate protein oatmeal so my day began with a bowl of overflowing oats, hence the rather horrific-looking breakfast bowl you see below. Woops! 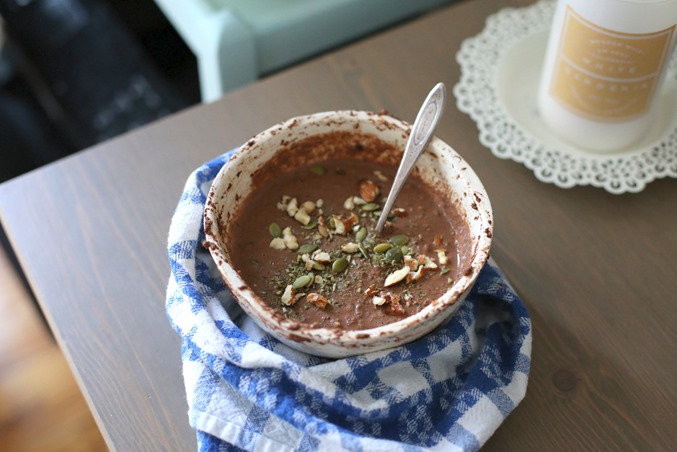 One day I will learn…

I ate my oats, wrapped up Tuesday’s Weekly Workouts blog post, said goodbye to Ryan as he headed off to work and then spent some time with my devotional until Chase was up and ready for action.

Our morning looked like the usual around here and included plenty of stories and playtime as we got dressed and ready for the day. I am happy to report that Chase recently decided underwear isn’t so bad after all (of course he waited until after I went on a frantic internet search and ordered several packs of tiny boxers for his itty bitty booty) and now he takes the underwear selection process very seriously every morning. I lay out all of his underwear options and he stands there flipping them over and considering his choices for more than five minutes before selecting the perfect pair of Thomas or Paw Patrol underwear for the day.

It’s a big improvement from the Always-Commando Toddler we had on our hands a week ago, so I’ll take it! 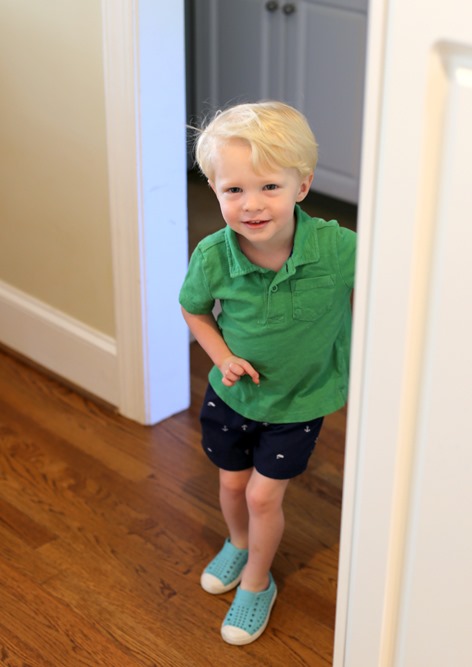 With underwear on and a few trips to the potty under our belt, we headed off to boot camp where a leg day workout was on the agenda. 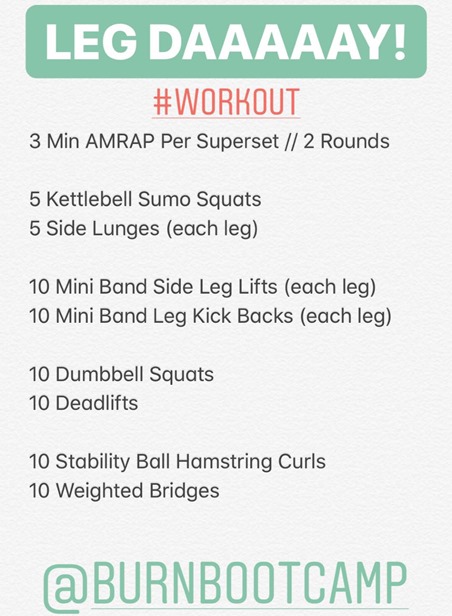 Once my workout was done, I said goodbye to my friends and scooped Chase up from childcare before we piled into my car, ate a snack and headed off to Chase’s swim lessons. 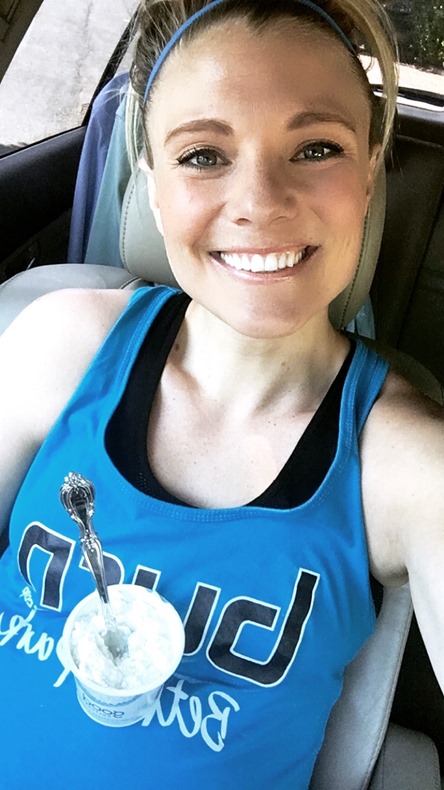 Annd my 34-week baby bump is officially big enough to serve as a shelf for snacks!

Swimming went well-ish – going underwater isn’t Chase’s favorite at the moment – and we spent a solid 30 minutes after his lesson eating the snacks I packed and watching the big kids swim. Watching the other children splash and swim is one of Chase’s favorite activities and I think we’re beginning to establish a bit of a pattern because now right after his post-swim shower he talks all about wanting to stay to watch the big kids. 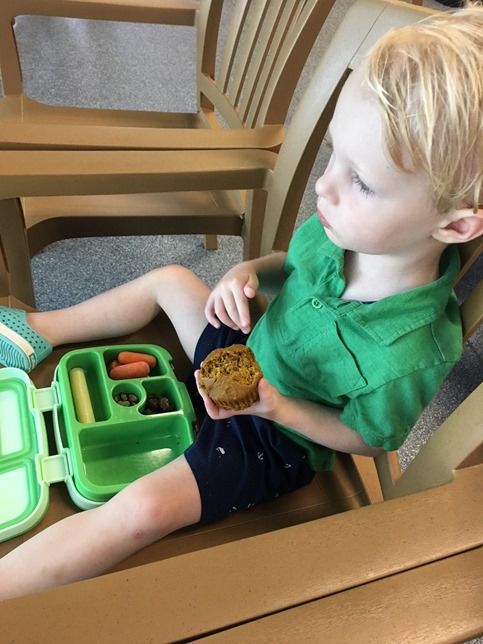 It’s not a bad way to go because sometimes trying to coerce him into sitting still for lunch is a bit of a battle in our house, so this has proven to be a great way to get lunch in his belly before we arrive back home and his toys and playtime distract him.

We made it home in the early afternoon and spent some time playing outside with Sadie. Unfortunately Chase ended up falling pretty hard on our driveway and the tears started flowing. The majority of the time Chase bounces back quickly after a fall, but I think he was already tired from swimming so his fall quickly led to a downward spiral of crocodile tears. I tried to get him to calm down but his crying only escalated and his need for a nap became glaringly obvious. We headed upstairs and made it through one story before Chase requested prayers and “cover up” (when I cover him up with his blankets), so clearly he was ready for sleep!

Chase usually talks and sings and plays in his crib for at least 30 minutes before he falls asleep (if he falls asleep at all…) but he was out in no time yesterday. No nap on Monday coupled with a busy morning and two skinned knees = Toddler nap necessity.

I spent Chase’s naptime on a random assortment of to-dos. I worked on the computer and met up with a man from a residential construction company about replacing the roof on our house and some wood rot issues we have around a few windows. All the fun stuff!

My lunch for the day included the final two pieces of a frittata I made earlier in the week along with a cup of yogurt topped with cacao nibs and hemp seeds… plus a small bowl of Rice Chex about 30 minutes later. 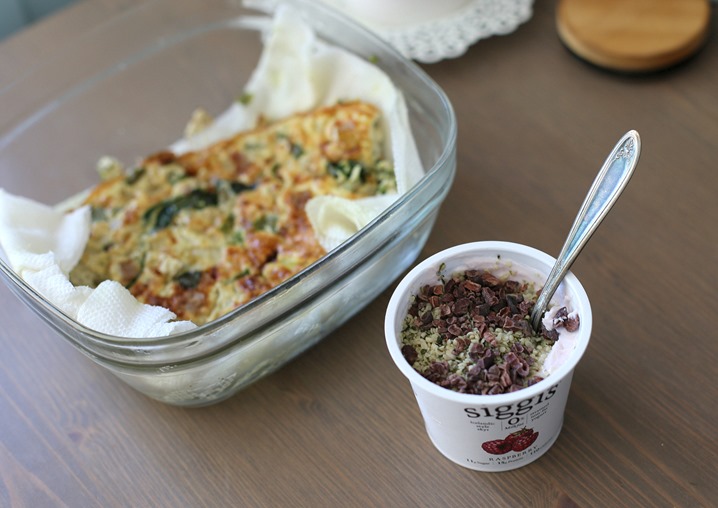 Chase woke up from his nap in a good mood but immediately talked about the boo-boos on his knees from his earlier fall. His solution to making them feel better was for Mom to “wrap them up” in his blankie, so we played in his room with his toy cars while he sported some kind of a make-shift kilt to “heal” his knees. The things toddlers come up with never cease to make me laugh, I’m tellin’ ya!

We eventually made it downstairs for a snack – an apple with peanut butter for both of us – and when Chase asked if we could make cookies for an afternoon activity, I couldn’t say no. Sugar cookies sounded absolutely perfect to me, so we whipped up a batch and tried not to eat all of them in one sitting. 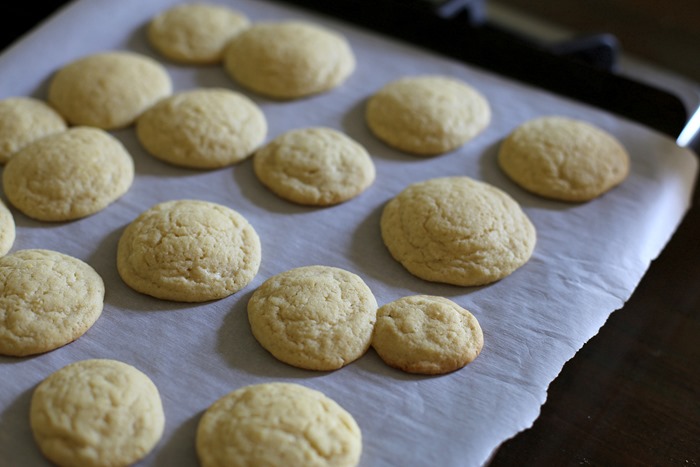 By the time Ryan made it home from work, we were ready for some outside playtime, so we leashed Sadie up and walked to the local playground. 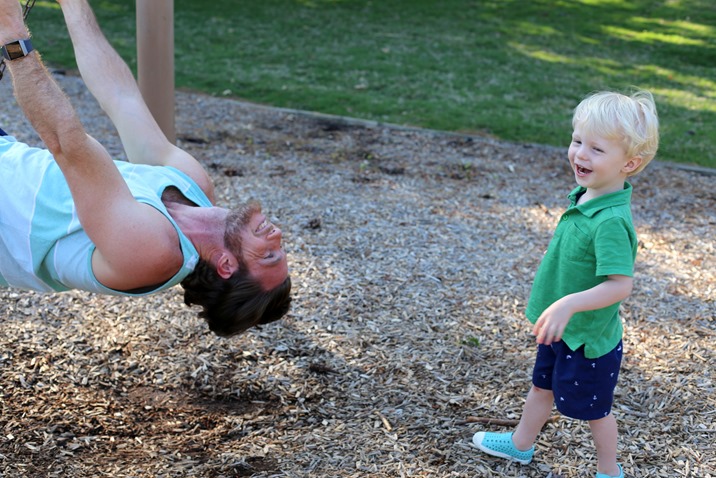 Evenings when Ryan gets home early enough to join us for some outdoor activities are my absolute favorite – and Chase’s, too! He had a blast pushing Dad on the swings, exploring the tree-lined paths at the park and sneaking around the playground to “scare” me. He also loves “catching” Ryan whenever Ryan slides down a slide after him which is way too adorable. 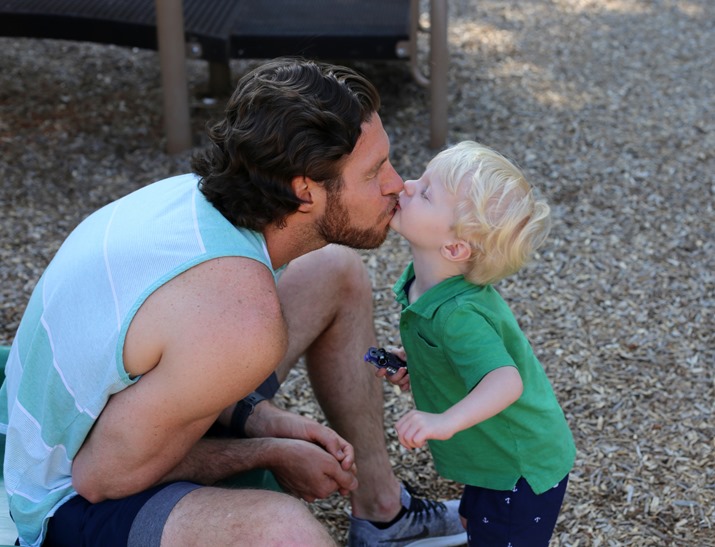 Of course the minute Chase and Ryan have any sort of a sweet moment between the two of them, you know someone’s jealousy kicks into high gear… 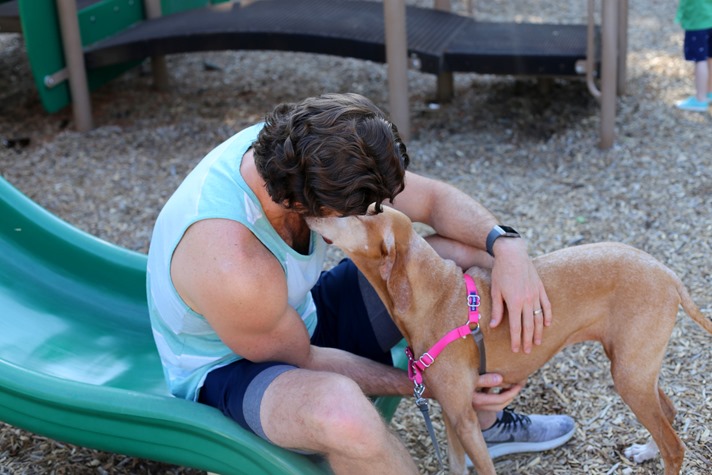 Sadie is never far from the kisses if there’s a little extra love to give away, that’s for sure!

We spent about an hour or so out and about and once we made it home neither Ryan nor I had any motivation to cook dinner. Since I let meal planning and food prep fall to the wayside over the weekend, we were hurting on options and ended up digging into the freezer for a frozen pizza that we served with hidden cauliflower strawberry banana smoothies since the pizza was way too small to feed the three of us. 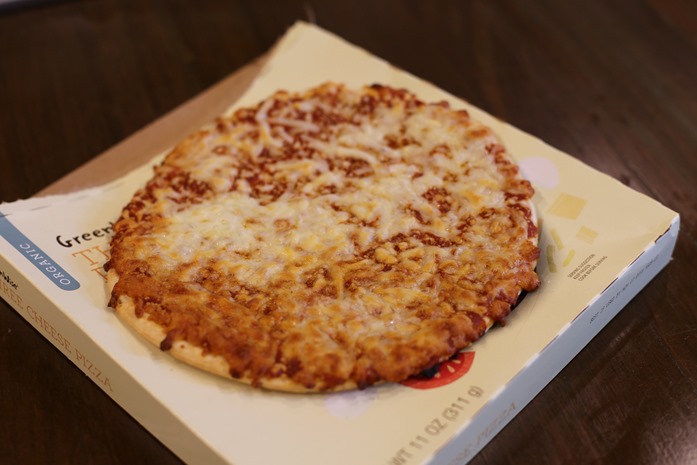 It was random but it worked!

We skipped Chase’s bath last night since it wasn’t hot outside and we did the whole post-swim shower thing earlier in the day and by the time we had him tucked into his crib, I was more than ready to unwind with a little Natural Calm and reading before bed.

I finished The Last Mrs. Parrish last week (it was a quick read and thoroughly entertaining but a bit predictable for me) and I recently started reading The Family Next Door. I’m about a third of the way through this one and I’m loving it so far! It reminds me a lot of Liane Moriarty’s novels (Big Little Lies, The Husband’s Secret, etc.) and hooked me right away. I have a feeling you’ll be seeing a full review of this one on the blog on Friday!

And now I’m off to get movin’ for the day. My Wednesday should be a good one but busy! I have a couple of appointments on the agenda and then I am doing an Instagram Stories takeover for Vitamix that also involves a pretty sweet Vitamix giveaway on my personal Instagram, so definitely check it out later today if a new blender is on your radar.

Have a great day, my friends!