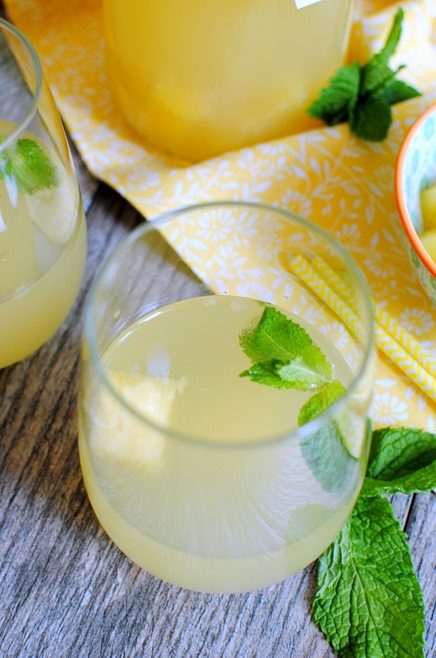 A couple weeks before Chase’s first birthday party, I went on a Pinterest pinning spree and pinned a myriad of recipes, craft projects and decor ideas for his You Are My Sunshine themed party. One of the first drink recipes that popped out at me was a recipe for pineapple mojito sangria. I love mojitos – they’re my go-to cocktail in the summertime – and the addition of pineapple to the sangria recipe gave the drink a yellow hue that worked perfectly with our bright and cheery sunshine theme. I was instantly sold! 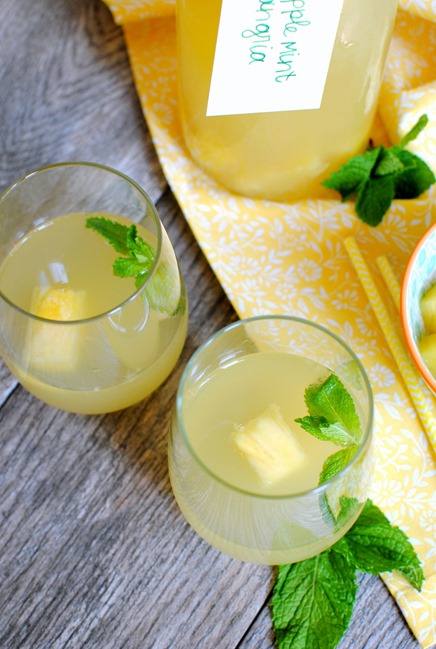 The day before the party, I bought everything I needed to make the sangria and yet, when the party rolled around, it was the very last thing I made before guests arrived. When something is left to the last minute on party day, cutting corners seems to be the name of the game, so I omitted the more involved steps of the recipe that called for muddling mint with 1/2 cup of sugar and lime slices.

I decided to cut the sugar and lime from the recipe completely and we were left with a batch of pineapple mint sangria that ended up being a huge hit! I had multiple guests ask me for the recipe during and after the party and everyone said the same thing… They liked how the sangria was refreshing but not overly sweet. My biggest complaint with sangria is that it can sometimes taste like a total sugar bomb, so omitting the 1/2 cup of sugar from the initial recipe ended up being a great decision because we were left with a batch of sangria that let the flavor of the wine, fresh mint and pineapple juice shine through. 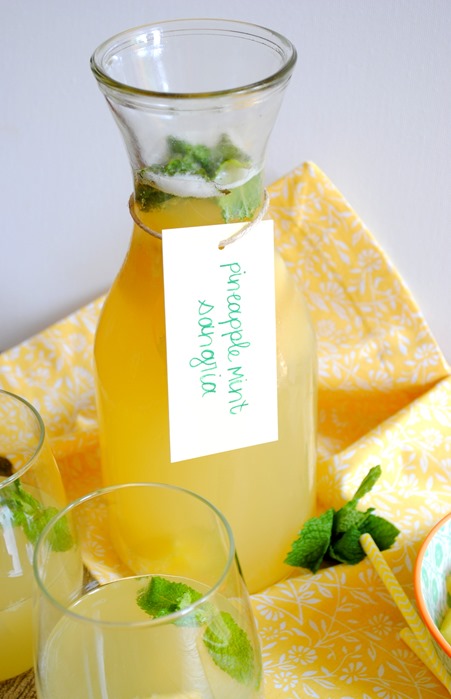 I wanted to share this recipe with you guys today in case you have a party coming up or a craving for a glass of refreshing, summery sangria hits you on a hot summer day. It’s a great recipe that I couldn’t resist making again last weekend because we loved it so much. It’s like summer in a glass… with a little kick of rum and wine-induced fun.

An added bonus? It’s easy to double or even triple for a large crowd!

This recipe for pineapple mint sangria is the perfect not-too-sweet sangria recipe for summer parties when you want to sip on a refreshing glass of sangria but don’t want to feel like you’re drinking a cup of sugar. Fresh mint, white wine and pineapple juice give this recipe a festive, summery flavor!

« A Rejuvenating Weekend
What to Expect at Orangetheory »