Navigation
Good morning and Happy Wednesday! I hope your week is going well so far. Thank you so much for your sweet comments surrounding Chase’s You Are My Sunshine party post yesterday. I love party planning enjoyed bringing you guys along for the fun via photos and random anecdotes from Chase’s special day. I also owe a big thank you to Leslie and Ross for snapping all the pictures and allowing me to unplug and enjoy the party to the fullest!

Today I thought I’d share a glimpse into our day yesterday – throwback PBF style – since a bunch of you chimed in last week to let me know you still like to read these day-in-the-life style posts from time to time.

Here’s a peek into our Tuesday!

Tuesday began bright and early! Ryan usually wakes up at 5:30 a.m. to row in the morning and I typically get up with him to get a jump start on my work for the day.

Ryan got a rowing machine for Christmas and is still loving his rowing workouts (a la Frank Underwood) and he typically pairs them with strength training for a quick morning workout he can do at home. While Ryan worked up a sweat, I made myself a cup of coffee with collagen and Fairlife whole milk and paired it with two slices of a pre-prepared frittata and an apple for breakfast. 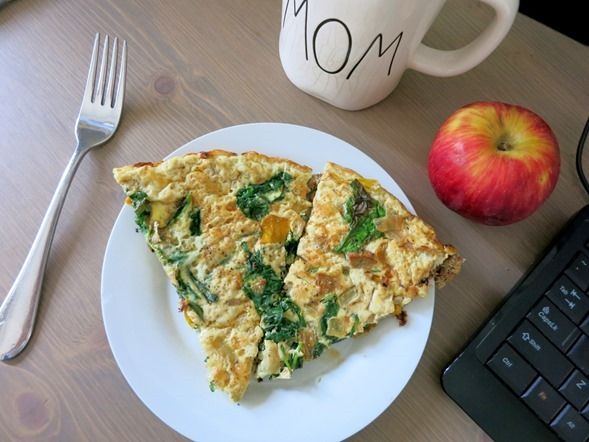 I ate while I wrapped up Chase’s birthday party recap post and scheduled the corresponding social media shares before Chase started stirring in his crib and was up for the day just before 7 a.m.

Once Chase was up, my mom woke up shortly after (she’s staying here through next week!) and we all played with some of Chase’s new birthday toys (he is loving this steering wheel toy) until it was time to head out to boot camp.

The Burn Boot Camp workout of the day was an Athletic Conditioning group workout. I went through the workout with four of my girlfriends and we were a sweaty mess after the 25-minute sweat session! 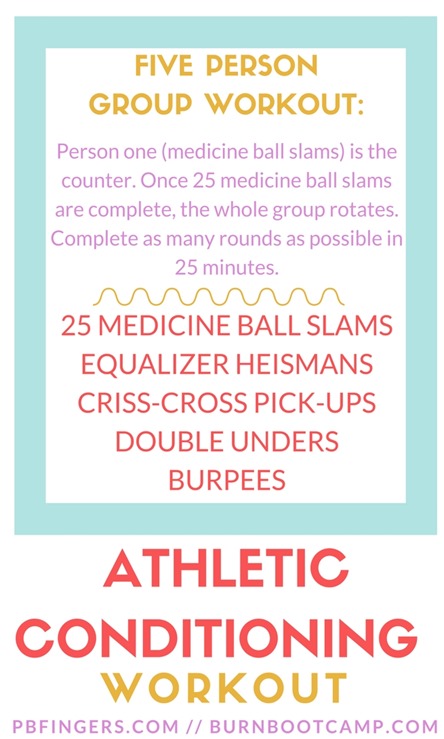 By the time I picked Chase up from childcare and said goodbye to my friends and their little ones, Chase was ready for his morning nap and fell asleep within minutes of our arrival back home. As you may have seen on Snapchat, I used Chase’s naptime to shower, make myself a quick protein smoothie (coconut milk + frozen banana + spinach + SFH chocolate protein powder) and plan out four workouts for a fitness photo shoot I had on my calendar with Stacey for the afternoon! 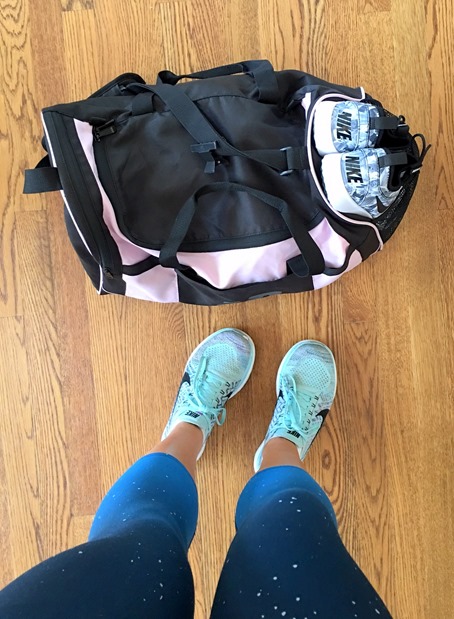 With my mom in town, I’m trying to take advantage of her offer to watch Chase and scheduled a bunch of random appointments (hair, dentist, workout shoot, etc.) while I have childcare help! After kissing Chase goodbye and thanking my mom for her help, I drove to the gym to meet with Stacey and shoot several workouts to share with you guys in the future.

Stacey is such a pro and we flew through all of the workout pics I needed in no time at all. She has the ability to snap action shots in one or two takes and it amazes me! I am kicking myself for not reaching out to a professional photographer for workout shots sooner because I know it makes it a million times easier to follow the workouts I share when you have picture tutorials right in front of you. I tried to listen to your workout requests and will have a bodyweight workout, bosu workout, an upper body workout and a cardio killer workout to share with you guys soon!

By the time I made it home, I was more than ready for lunch and apparently Chase was, too! My mom had Chase eating salmon and sweet potatoes in his high chair, so I snacked on some almonds while I quickly whipped up an egg white oatmeal protein pancake with cacao nibs to eat beside him. 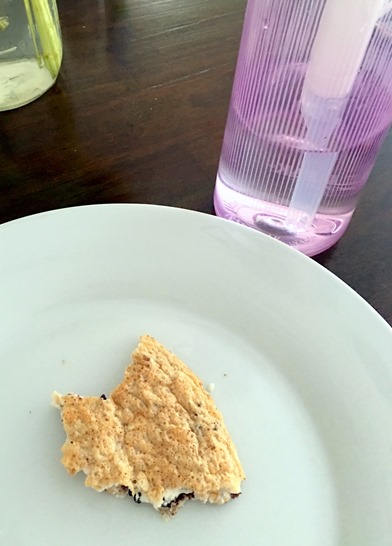 Clearly I am out of the habit of snapping a ton of food pics, because I remembered to take a picture of my pancake at the last second. Blogger fail.

Along with my protein pancake, I ate a big ol’ bowl of cherries and they were perfectly ripe and sweet. Yum! 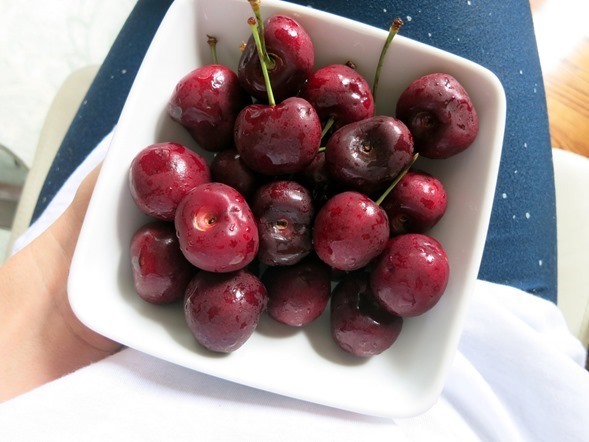 I spent the next hour or so trying to work while popping in and out of playtime with my mom and Chase before he went down for his afternoon nap. Chase’s afternoon nap has been hit or miss lately and Ryan and I are beginning to think that he’s working toward dropping it. My fingers are crossed that this isn’t the case, but his previously stellar two-hour afternoon nap is now closer to an hour and often restless. Eek.

While Chase slept for an hour, I started working on this blog post and ate a bowl of Pumpkin Spice Cheerios. 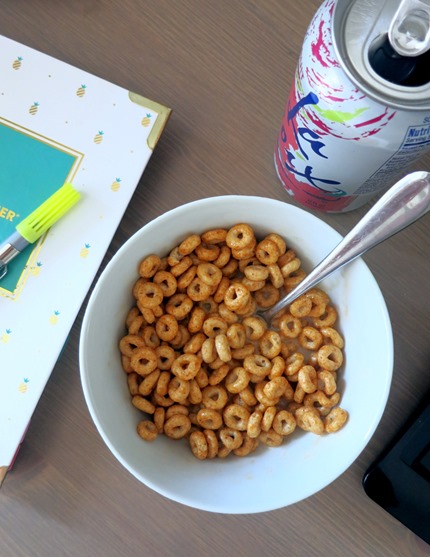 General Mills sent me a preview box of the cereal and the seasonal Cheerios are so stinkin’ good! Eating one bowl of Cheerios is impossible, so about 30 minutes later, I ate another bowl. Can’t stop, won’t stop. 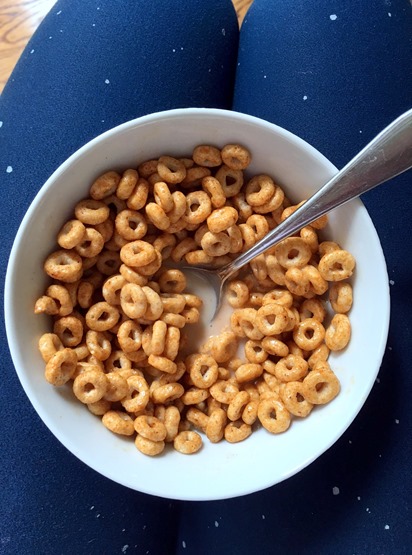 Before I knew it, 4 p.m. rolled around and Chase was up again. My mom and I flip flopped between hanging out with Chase and preparing dinner and it was really nice to have a second set of hands during the time of day when Chase is often the most on-the-go. 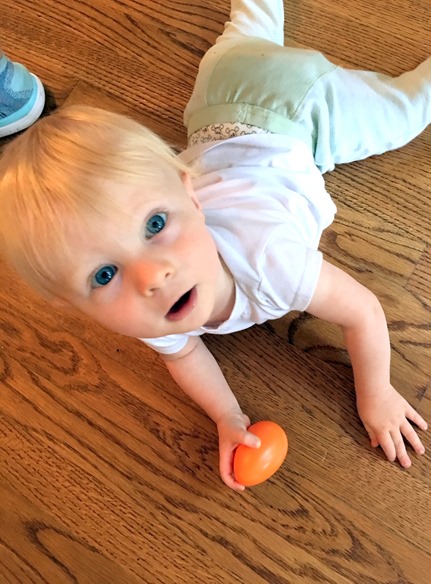 Chase is happiest in the morning but there is something about the early evening that makes him want to crawl, climb and chatter away!

Dinner last night included an updated take on my favorite edamame and black bean salad with shrimp added into the mix. 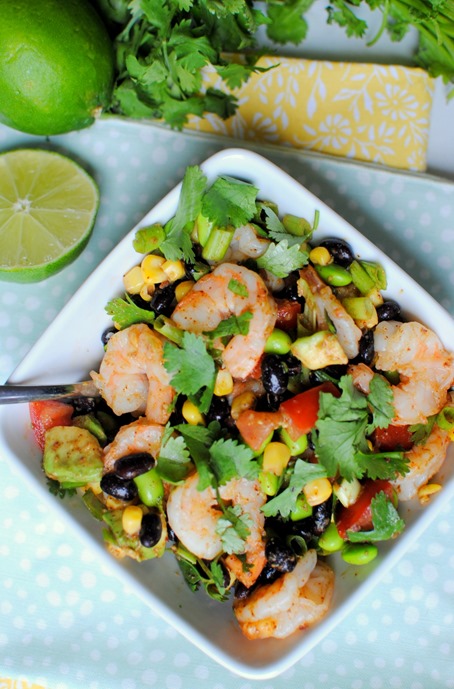 I took the time to style my bowl a bit before photographing it because I needed to snap some pictures of the dish for a project I am working on that I’m excited to share with you guys in the coming weeks. Since my diet was rather light on the produce and heavy on the cereal yesterday, it felt good to get some vibrant veggies in my belly at dinnertime.

Ryan arrived home from work a little late last night but Chase decided his normal bedtime wasn’t happening, so Ryan fortunately got to sneak in some quality time with our little man before it was time for him to go to sleep. 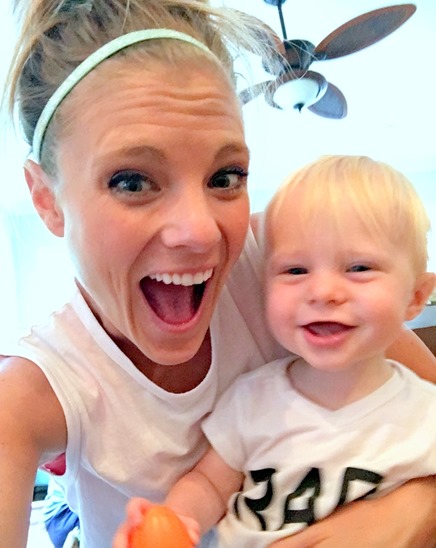 I’m not sure where Chase’s energy came from, but he was practically bouncing off the walls for hours last night and fought his bedtime with all his might (and all his screams when we’d try to put him down). Eventually he settled and finally went to sleep, leaving us an hour or two to unwind before heading off to bed ourselves.

Since I ate dinner early with my mom and Chase, I was hungry again around 9 p.m. and whipped up a simple smoothie with milk, a frozen banana, frozen strawberries and a drizzle of natural peanut butter to enjoy after Chase went to bed. 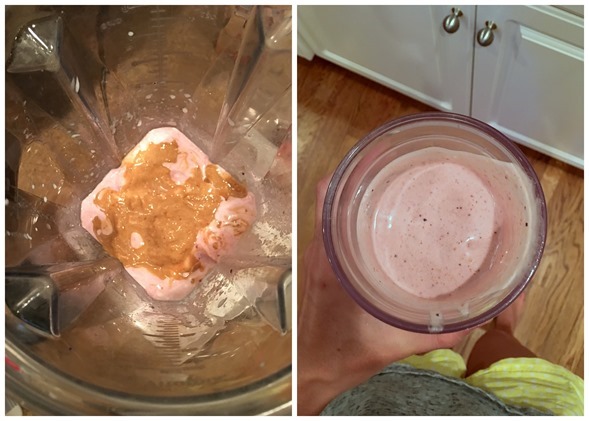 A little Bachelor in Paradise followed (what a train wreck of a show… but I just can’t resist it) and then we finally crashed in bed around 10 p.m.

I hope you guys have a good Wednesday!